An adventuresome soul, Mark Zappone, creator of the costumes for Olivier Wever‘s new Flower Festival, has traveled the world over in pursuit of his craft.
One opportunity leads to another, an interest in everything around him drives him on, and lucky happenstance has often played a major part in his career.

When we talked last week, Mark had just come back from New York where he had taken mockups of costumes he is designing for ballets by Christopher Wheeldon and Edwaard Liang—he finds this much the best form, rather than sketches, for choreographers to view and try out his designs. (And he’s back there again now.)

Mark met Olivier, not surprisingly, at Pacific Northwest Ballet, a long-time affiliation for them both, and their rapport was evident from the start. Last season, Olivier asked Mark to build costumes for a new piece, later titled INAT$ (It’s Not about the Money).
They talked about a mystery, the passing of secrets, a bare shoulder, a flick or brush with the hand of the bare shoulder. Evocative light, a deep blue color for all three dancers. Choreographic and costume ideas fed on each other. Once a first version was ready, adjustments followed. Kaori’s original costume was quite long. “Best to try it that way—you can’t go backwards,” says Mark. It kept getting shorter and shorter. The men wore velvet pants, and their tops involved an athletic mesh fabric, the first time Mark had used it. “Muscles come through in a different way. [The fabric] shows up more interesting than you expect,” he says, “a new balance point from experiment.”

Flower Festival , which will premiere this weekend at Intiman Theatre also involved plenty of experiment. Olivier wanted to start with businessmen, clad in real business suits. To begin with there were some crazy ideas—what about blue and purple plaid suits, say? They both agreed that was going too far. Two gray suits were purchased and overdyed. “Not the most expensive, but of a nice cut,” says Mark. It’s a bit scary throwing a suit into a vat of turquoise or fuchsia dye. No one knows quite what will happen. Christine Joly de Lotbiniere, who helped with the process, said, ”Are you sure you want to do this?” They threw it in anyway. And back in, checking the different tones that emerged. The process is bit laborious, because you have to dry and press it after dyeing to see how it looks.

But the results are striking. When two well-dressed men, equals, walk out on stage, dragging office chairs, they are all business. Their suits are only the slightest tones of off-gray. Then you start to notice strange things. Their jackets have tropical patterned linings and matching ties, in deeper shades of the basic fuchsia or turquoise. And the two men begin to undress, starting with taking off their shiny black shoes, until they wear nothing but satin boxer shorts and socks, in the most brilliant shades of the same colors as the suits, along with white undershirts. (Mark and Olivier clearly had great fun with the boxers. They looked at pictures and movies, of boxers in boxer-shorts, and discussed length and the placement of the stripe down the side.) The stripping down is for a pugilistic contest—rather than the strip-tease of last year’s Coquette—a macho battle of personality and will. 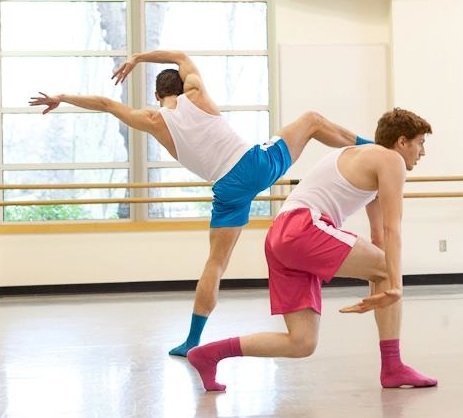 The whole costuming process took many fittings. There was the question of how to get the suits on and off easily. Silky linings help with the jackets, but as the jackets become part of the choreography, the clothing has to be very tough. Getting the trousers right was also tricky (in one rehearsal, the more extreme moves called for in Lucien’s role split his pants down the middle). They needed to be bit looser— a balance found between looking good and moving easily.”As a designer,” Mark says, “you have to retrain yourself—my greatest goal is to try to make the costumes fit the piece, the greatest compliment is when they do.” His most important practical goal is to make dancers comfortable. It takes a lot of close attention to details. A fraction of an inch narrower on a shoulder. A more relaxed fit at a waist. Gussets were needed under the sleeves so dancers could raise their arms more freely. Same with the shirts. Mark had bought an extra one to use the material and an extra pair of pants in the suit material. He angled the bottom of the shirt up, the way they used to be cut and put in the new, patterned lining after it was dyed. Stretch in the material of the shirts, suits and linings help keep them both flexible and good-looking.

Yet there is still more to it than all of this. Clothes, these suits in particular, are physical objects representing an emotion, representing something they are not. “Clothes make (or unmake) the man” was never truer than in this witty version of Flower Festival.

Mark Zappone has always been an experimenter. He started out in architecture, then went on to theater design, being interested in clothing, costuming, history. The department in the college he attended was very small. It was a matter of “Who wants to do…?” and jumping in to help. Since then, Mark says, he’s gone to the school of life. “Observe others and glean.” His first stint as a costumer outside academia began at Seattle’s Civic Light opera, where “everything was done with volunteers. No place or time to work.” The costume shop was a boys locker room so small that cast members had to stand on a table for fittings, and costumes were kept in the shower.

Later, as Mark tells it, when he was working for ACT, he happened to answer the phone one day. Randall G. (Rico) Chiarelli, Lighting Designer and Technical Director at Pacific Northwest Ballet, was looking for someone for the costume shop. When Mark got to PNB, he didn’t even know who Balanchine was. Big boxes of costumes were labelled with the names of ballets Mark had never heard of. Happily, Artistic Directors Kent Stowell and Francia Russell served as his mentors. Mark spent five seasons at the ballet, as costume designer, shop supervisor, and wardrobe master. In the costume shop, he says, “We were really a family. Many of the dancers and others were the same age as I was.” Larae Theige Hascall came as his assistant, and when he left in 1988, she took over.

A year spent at Roubaix Ballet changed Mark’s life. He made close friends, among them the young Peter Boal, there for a three-month stint. And Mark learned to speak French in a rough and ready way. It was a matter of necessity. In the costume shop he was in charge of four ladies who spoke no English. They learned to communicate. (Later though, after Mark had left PNB for Montecarlo, the secretary of Princess Grace—at that time President of the Ballet—remarked, “You can tell you work with peasants.” He was tongue-tied. He would start out with the formal vous, then slip into tu. “No, no, it’s okay,” he was told…)

From Roubaix Mark returned to Seattle to run Intiman’s costume shop. He had been there six weeks, when he got the call from Montecarlo. Do you want to stay here, he asked himself, or spend five years in Paradise? Paradise won.”There were amazing people at Montecarlo,” Mark says, “and no budget”—but not in the sense we’d use the phrase here, meaning “no money.” Rather the budget was limitless. A ballet called Verdiana, from the time of Grace Kelly, called for half a dozen costume changes.

Through connections at a cabaret in Montecarlo, Mark was then invited to work for Holiday on Ice, in Bern and later Amsterdam, where a friend linked him up with the Miss USA and Miss Universe competitions, for which he still designs costumes, traveling to exotic locations to work for a few weeks at a time. In between, he worked on and off in Paris on new productions for the Lido and the Moulin Rouge. “At the Cadillac costume shop of Paris,” there was an Auntie Mame-like woman who took him under her wing.

Finally, for family reasons—his parents were aging and he wanted to be near them—Mark returned to Seattle. Here he works at PNB as a draper and takes on many free lance jobs, with dance companies locally, in New York and abroad.

Last year, Mark lost both his parents. Twenty-twelve starts a new phase in his life. So what’s ahead? “I’m opening arms to 2012 with a new sense of curiosity in my heart. I’ve never lived by the rules. Look around the next corner. Walk down the street with your eyes open.”