I love watching things being made—it’s one of the most enjoyable perks of this job. 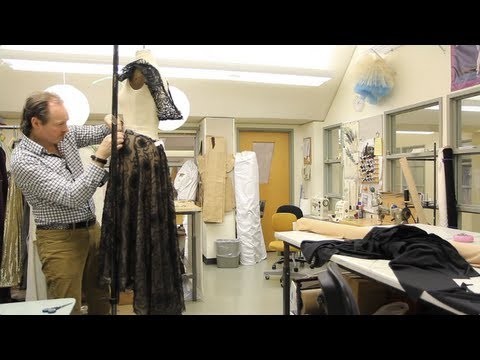 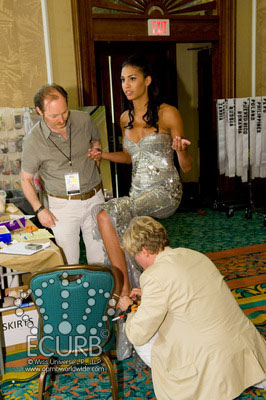 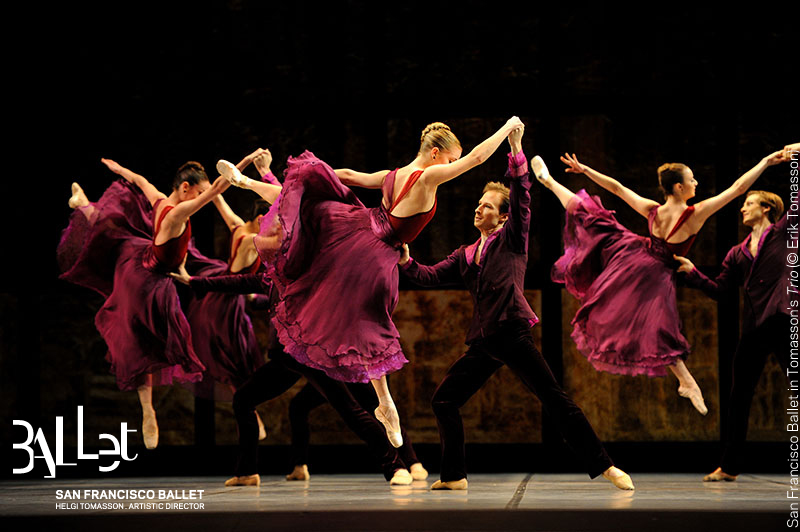 …to coming up with original, witty and dance-in-able costumes for Whim W’Him.

Whether on a shoestring or not, with months or days to do his job, Mark’s ingenuity, enthusiasm and good-nature in the face of myriad complications are legendary. 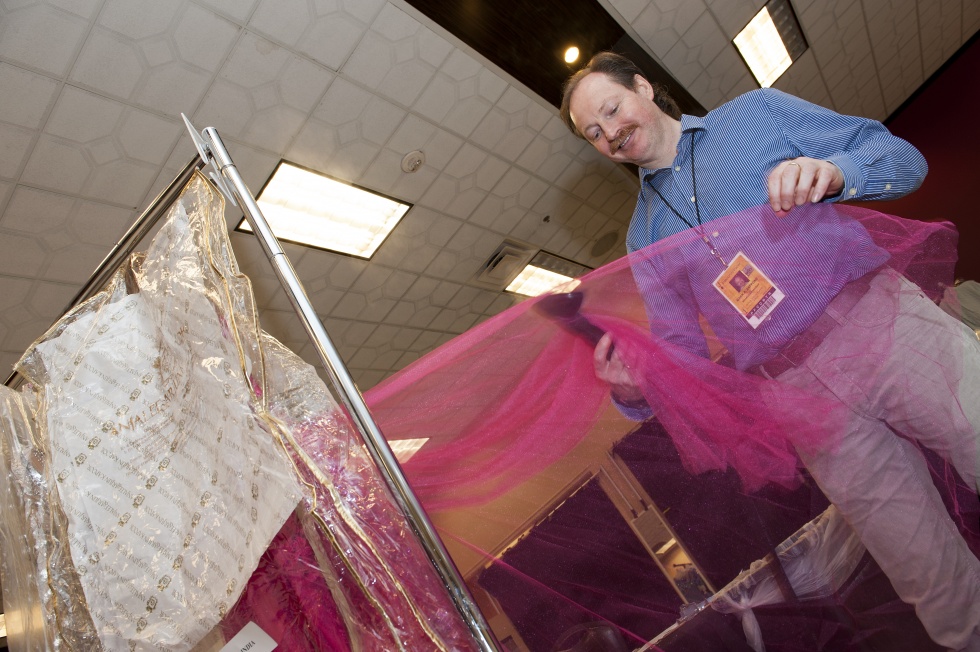 All these qualities have come into play in costuming the two world premieres of Whim W’Him’s Instantly Bound program (January 17-19, 2014 at Seattle’s Cornish Playhouse, formerly Intiman Theatre/Seattle Center Playhouse). As is often the case in outfitting contemporary pieces, rather than starting from scratch in the costume shop, Mark saves times and money by beginning at H&M clothing stores. Their stuff is chic, fits well on dancers’ slender bodies, and is cheap enough (often on sale) so that two or three of a garment can be purchased for each costume.

Such clothes bought at retail are only the beginning, providing a range of possibilities. Many stages of construction and invention are still to come. Mark knows the whereabouts of every H&M in the area and their hours (they were handily open until 11 pm over the Christmas season). Sometimes, after consultation with the choreographer, he will buy as much as $1000 worth of clothing to start with, though he might end up spending a mere $60 in the end. Mark says the stores are always extremely gracious about returns (though keeping all his sales slips in order must be something of a nightmare for him!).

In the case of Whim W’Him artistic director Olivier Wevers‘s current reimagining of Les Sylphides, party clothes are called for. His first idea was to have the dancers in each of the couples wear matching primary colors. But what Mark liked best, in searching through the stores, was a series of pretty party dresses in a lovely shade of deep blue.
He suggested going with a color scheme in blue. Oliver readily agreed. 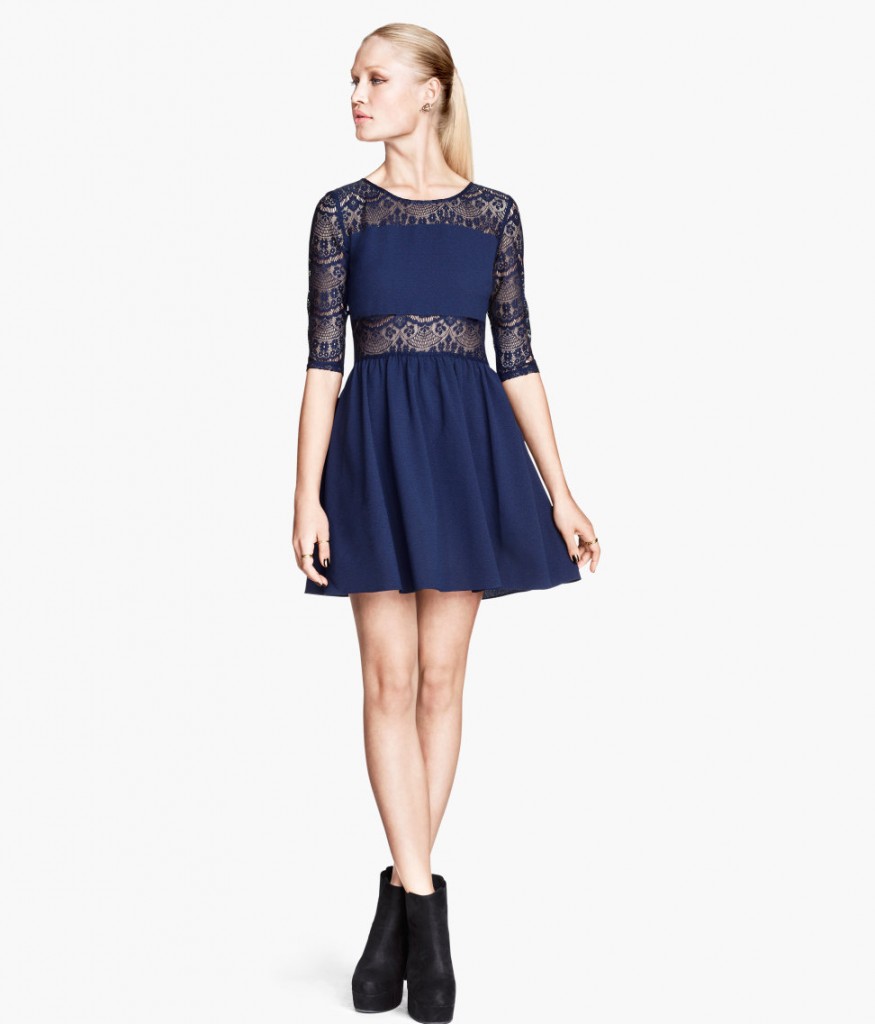 Next, Mark brought into play some lengths of sequined fabric: blue & a coppery tone, blue & gray; blue & black. These he used for highlights, fabricating sleeves or midriff inserts or a yolk for each dress. A good deal of dyeing and cutting and resewing ensued. To make the clothing easier and stronger to dance in, Mark reinforced seams and added gussets, using cloth from a second copy of the garment. To connect each pair of dancers—but “without hitting the audience over the head”—he doctored the blue plaid or check shirts of the man to coordinate with the trim on his lady’s dress. For example, to coordinate with the dress that had the blue/copper trim, Mark overdyed the shirt to change white and blue checks to blue checks on a pinkish/coppery ground.

To round out the look Mark found, at American apparel, blue socks (since all they all dance in socks) and lace trimmed blue underwear for the women. The men’s shirts are sewn to underpants (“party pants,” it seems they are called in the trade) to keep them in place. Otherwise, the legs of the dancers-in-blue will be bare. For the single uninvited guest—to suggest both difference and a certain degree of connection with the others—
a drape-fronted dress was bought, then gathers moved more evenly around the skirt, leggings added and black sequins sewn at the shoulders. The result: a septet of glittery, sophisticated, contemporary party clothes, resilient enough to withstand the brutal treatment they receive in this sharp-edged and highly athletic ballet. 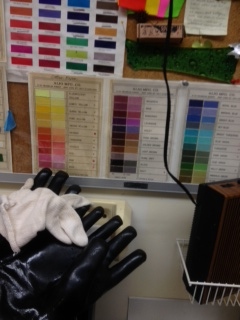 Juanjo Arques‘s Crossroads, although equally demanding of both dancers and their garments, has a quite different spirit. It is a dramatic but sinuous ballet, for which simple, subtle costumes are required. Juanjo wanted some sort of tunics that would fit “like their skin” to the dancers’ bodies, flowing with their movements. The starting point—after many lengths of fabric were tried to see how they draped and conformed with bodies— turned out to be H&M again. This time, the basic piece of clothing was an over-sized gray tank top (two of them were used to make each costume). A chance doubling of one top over the other suggested, serendipitously, an elegant detail at the shoulders, which figure significantly in this ballet. Mark separated the shoulder-piping of two shirts by a piece of fabric cut from the underarms of the second shirt and used its body to construct sleeves of various lengths. 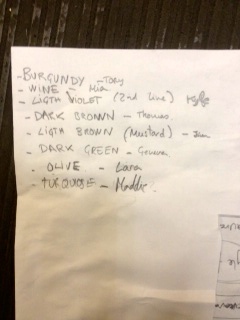 As to color, Juanjo wanted muted tones. First Mark tried to bleach the shirts out to a basic beige-y off-white, but the dye was too set and resisted the various chemicals he tried. So he and Juanjo decided on going with the underlying gray, overdyed with a distinct tone for each dancer. An initial idea of having the couples in this piece related by color was scrapped, since they are all individuals who recombine in the course of the ballet. So each dancer was assigned a different palette, and when I spoke to him in the costume shop Sunday evening, Mark had been working all day dying the tunics  in subtly graduated shades from light shoulders to black hems and underwear, the same shape and style for the eight. 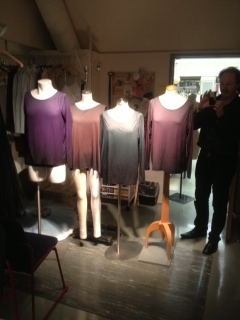 It seems so easy to go out to a convenient nearby store, pick up a few pieces of clothing and toss them together to costume a ballet. But it only takes a few moments—of listening to Mark Zappone and watching the meticulous care with which he factors in different aspects of texture, weight, responsiveness to light, susceptibility to dye, and wearablitiy—to recognize, in his attention to detail, sense of color, and the deep knowledge he has of how dancers bodies move in action, his mastery of his art and craft. 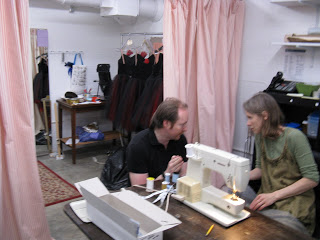