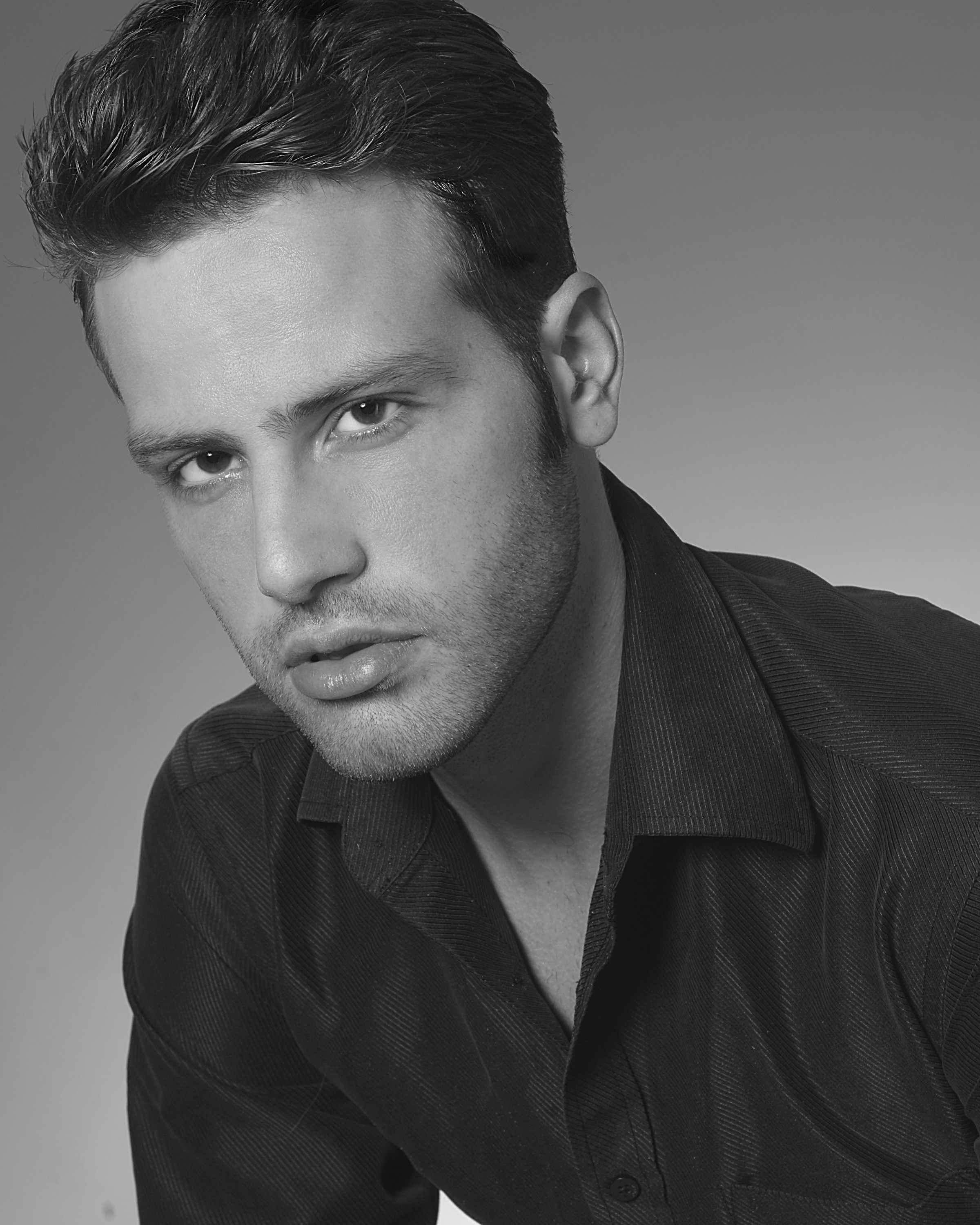 Shane Ohmer has been performing with Bad Boys of Dance as a lead dancer in Rock the Ballet. He has the buff body and stern/dangerous, almost sulky James Dean look you’d expect in that role. In person, however, he is very polite, eager, enthusiastic and friendly. And he can dance. He moves smoothly and intently, with skill and conviction, and learns readily. For Approaching Ecstasy (May 18-20 at Intiman Theatre) he will need all these characteristics. There are 18 separate pieces for the 18 poems by CP Cavafy (music by Eric Banks) some still being choreographed by Whim W’Him artistic director Olivier Wevers, of which Shane has to learn 8. Certain particular movements thread through several sections, but are used in different combinations and variations that could make committing them to memory trickier if anything. Only in town a few weeks for this show, he’s the latest dancer to join Whim W’Him and the last to arrive for AE rehearsals.

In fact, Shane is no stranger to Seattle or to other Whim W’Him dancers. Although in recent times he has been touring widely with Rock the Ballet (from Europe to Kazakhstan), he has had Northwest connections for about a decade. The fourth child of six in a lively and supportive Cincinnati family, he started to dance at an unusually early age, especially for a boy. In second grade, a neighbor girl invited him to watch her practice with a drill team (“I thought it was a wood working shop, drills and things— honestly!” says Shane). But after he’d seen what it really was, he joined up and has been dancing, more or less, ever since. In Cincinnati he attended the School for Creative and Performing Arts, where at 14, in the 8th grade, he started ballet classes.

During high school, he enrolled in Pacific Northwest Ballet’s summer course, where his potential was noted at once and he was put on the list as an understudy and professional division student. He felt “so loved and cared for as at PNB,” he says. “The teachers were very careful with their students, so full of care.” Although, as it turned out, he left for Chicago before the end of his second year—having seen Hubbard Street Dance perform Jiri Kylian’s Petite Mort and been offered a position in one of their troupes—he says he says he feels “eternally grateful” to PNB and considers Seattle his second home.

Chicago was an adventure for a restless soul, but not an unqualified success. Hubbard St. didn’t work out; another, jazz dance company wasn’t fulfilling (though he did get to tour the US, including Hawaii). “Fed up,” as Shane put it, he went to Canada to dance with Les grands ballets canadiens de Montréal, where he performed choreography by Balanchine, Forsythe, Mats Ek, Nacho Duato and more.

Among those who have most strongly influenced Shane, in both dance and life, is Israeli choreographer and artistic director of Batsheva Dance Company, Ohad Naharin, whose conviction that “Anything is possible and nothing is permanent,” seems a fitting motto for Shane Ohmer’s life so far. After a time in Montreal, Shane was off to New York where he didn’t dance for two years, but worked at a milliner’s and was scouted as a runway model, along with other jobs. A friend who had recently auditioned for Rock the Ballet suggested that he should do so too. Although at the time he was considered too tall, he was later called back to perform as a principal dancer and has been on the road since. 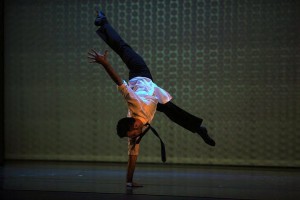 His current tour with Bad Boys of Dance ends in August. What comes next?
“I haven’t any idea,” says Shane.
But after scores of shows in the same role, he now revels in the challenge of learning a lot of new material for Approaching Ecstasy and being in the middle of its creation.

The first piece I’ve seen Shane dance is a duet with Jim Kent, still being choreographed by Olivier. One of the few purely narrative segments of  AE, the poem describes a chance encounter.

At the tobacco shop

They stood in the window of the tobacco shop,
Under the bright lights, and among several other men.
By chance, their glances found each other,
And expressed the forbidden desires of their flesh,
And their fear, and their hesitation.
After a few anxious steps along the sidewalk –
They smiled and nodded to each other, faintly.
Finally, the carriage came, and they closed its doors…
And sweet desire drew their bodies together;
And their hands, and their lips.

The two men tap their feet, shoot each other sidelong glances (smoldering in the case of Shane, cool and enigmatic from Jim), and sidle sinuously into their approach. An intriguing and recurring aspect of Olivier’s choreography is how it picks up on the vernacular of everyday movements. He must observe people continually in all sorts of situations, taking in, whether consciously or not, their small gestures and looks, how they transmit emotions, how they keep them bottled up. The resulting works are clearly danced, not just mime or pedestrian imitation of the daily grind. For one thing, a non-dancer would have nothing like the strength, stamina, flexibility, grace, or physical awareness of the music to transmit Olivier’s choreographic subtleties! In keeping with his very personal sense of the world, which expresses a colloquial, contemporary quality while also reaching out to the universal, Olivier has chosen a group of highly distinctive dancers. Shane Ohmer is a great match for this unique company. 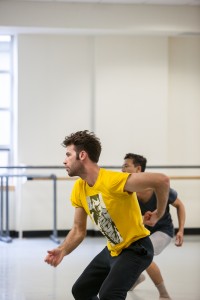 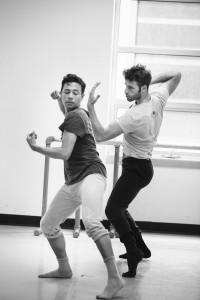 For the tobacco shop poem, one of the cleverly designed boxes by Casey Curran serves first as the tobacconist’s backdrop and then as the carriage. Next Tuesday’s post will give a glimpse of Casey’s work-in-progress and some insights into his ideas for the show.
Coming up before that, on this Friday: In the theater—dancers and singers meet for the first time, and try out the stage together.