Kelly Ann Barton in person is small, pretty, sweet and a little shy- seeming. She surprises me with her off-stage presence, because onstage she is powerful, sometimes stern and even forbidding.

Dance Magazine, October 2009, says of Kelly Ann: “Her petite figure is at once zaftig and muscular. The earthy blend of power and sensitivity in her movement makes her utterly captivating—you can’t take your eyes off of her”. A lovely description and very accurate. When I mention her strength as a dancer, she says she was always athletic, playing basketball and soccer as a kid, then hints at another kind of potency by adding, “It’s all very real to me. It comes from a very interior place.”

2006 was a crowded summer for her. Accepted at SUNY Purchase, she meant to start classes there in the fall, but had a chance to audition for Donald Byrd. Offered a place in the company, she put off college and is still at Spectrum, teaching as well as dancing. She is now also enrolled in the BFA program at Cornish College of the Arts in the Professional Dance Division. Working with Donald “is a challenge in ways you’d never expect,” she says. “His pieces are intelligent and emotionally and physically intense.” She continues, “He pushes you until you are in the vulnerable place where you grow.”

Kelly Ann finds Whim W’Him an interesting contrast to Spectrum. Olivier Wever’s “very distinct style and personality” brings out different elements of her as a dancer, she says. “He is extremely clear and definite about details, and still lets you express your own personality.” She likes the playful, witty nature of his choreography and finds the atmosphere at Whim W’Him “very nurturing—the positive energy contagious.”
FRAGMENTS, a vibrant and quirky duet by Olivier, premiered at Spectrum in 2007 and was part of Whim W’Him’s first full program last January. Both a spoof and a loving, quite serious dance interpretation of Mozart vocal music, it started out as a dance for two women, one of them Kelly Ann (the other Hannah Lagerway, who danced last year in Whim W’Him’s  3Seasons and is now in Germany at the Nuremberg Ballet).

The piece has had an interesting evolution. When Vincent Lopez, also a Spectrum dancer, was put into the second role, Kelly Ann says (perhaps a little wistfully?), “It became somewhat of different story for me. Some may see it as an exploration of gender roles.”

But she also is enthusiastic about how great it has been to dance with Vincent. They have become friendly and close in a way that probably wouldn’t have happened otherwise, she says. And she loves the playful quality of the piece, “the way we play off each other, especially at the start.”
When I asked about the 13th Annual Dance Under the Stars Choreography Festival competition in Palm Desert last month, where FRAGMENTS won the Grand Prize, Kelly Ann laughed. “It was a long and eventful 24 hours. We had an incredible time!”. Vincent was guesting in South Carolina. He arrived the day of the performance. The tech rehearsal was in a parking lot. The theater didn’t have the cues for the lighting—so crucial to FRAGMENTS—and Olivier ended up taking on the job of lighting director for the performance. “I was really nervous,” he admits. But the audience was wonderful, “so responsive and engaged from the very beginning,” says Kelly Ann. “And it’s great for Olivier’s work to get that recognition.” 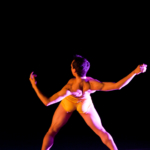 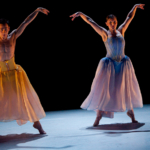 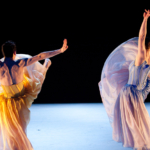 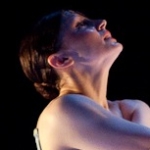 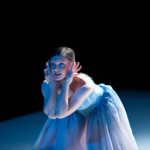 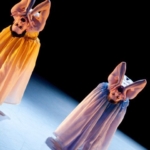 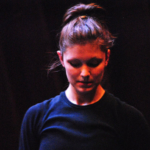 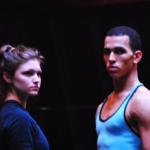 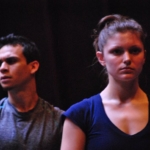 Fans of Kelly Ann, Vincent, and FRAGMENTS will have another opportunity to see them in action at the A.W.A.R.D. (Artists With Audiences Responding to Dance) show at On the Boards, on the last weekend in January 2011: whimwhim.org/performances2010/awardsshow.html
Photos courtesy of Spectrum Dance Theater: spectrumdance.org/company/dancers-01.php
La Vie Photography: LaViePhoto.com and Kelly Ann Barton