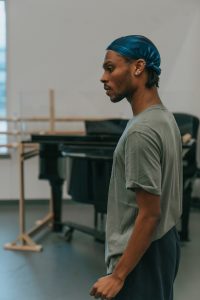 Jakevis Thomason says he has been dancing “forever.” He started at the tender age of 3 with a competitive dance school, Dianne’s School of Dance, l in Greenville, SC, taking classes and competing with them through high school. He studied all sorts of dance forms—jazz, contemporary, lyrical, clogging, hip hop, ballet (though this wasn’t part of their performances)—learning “not just combos but also studying technique and rhythm and isolation in the body.” He thinks that hip hop and jazz, in particular, are often undervalued, but they both taught him a lot in his training. “Every dance form has history and technique to it—the more care we take of the foundations,” he says, “the more valued it becomes.” 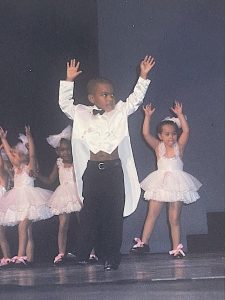 All along Jakevis was all in. Dance has always been vital to him. He did odd jobs at the dance school to help make ends meet for his single mother and pay the fees associated with competitive dance. In the studio he was perennially engrossed. His only real plan on finishing high school was to keep dancing, maybe in New York or LA. But  at the suggestion of a friend, he applied to the University of Southern California’s new Glorya Kaufman School of Dance program. He was accepted into what turned out to be a terrific match for him. 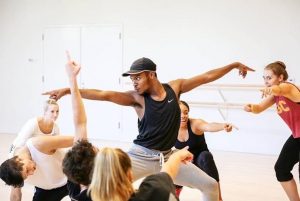 “I was interested in everything, talking it all in, choreography, composition, teaching, performance,” he told me. He learned about more kinds of dance and particularly loved creating his own pieces, drawing on the many different styles and traditions he’d been exposed to. At the Kaufman School, he auditioned his student choreographic work to get the chance do longer works. His submissions were picked each year. “USC,” says Jakevis, “gave me space, no pressure—to explore my creative voice.” 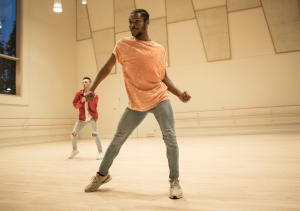 Some day off in the future, Jakevis would love to have his own company, but for now he is brimming with enthusiasm about working with Whim W’Him, the first professional company to commission a piece of his. “I thought it would be later down the road,” he says frankly with a wide smile. He’s excited by the challenge. “It’s all about growth and pushing yourself!” 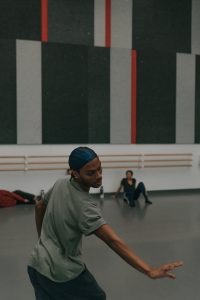 Asked what inspires him and the origin of his ideas for the current work, he replies, “Everywhere! Things I’ve experienced. For example, I like things with groups of people, films, parties, places where multiple paths cross like airports. I’m big on individuality and how unique our lived experiences are to us. PLUS I’m inspired by the dancers I’m working with.” In a VoyageLA  interview he said, “Recreating a moment in my life through nothing but movement and sharing it with others to either embody or watch is an act of vulnerability that is interesting to me and pushes me to keep creating.” 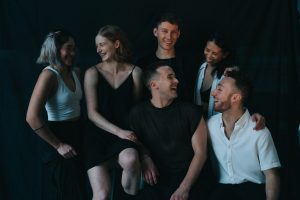 Jakevis is full of enthusiasm about his time with Whim W’Him’s dancers. He loves interacting with a group who have been dancing together for some time. “The dynamic is stronger. They feel really close. It’s their second family. They have a beautiful trust established already. There’s no pressure from them. There’s lots of light in the whole atmosphere.”

Jakevis tries not to come into the studio with too much already set until he’s met and worked with the dancers. But he knew that this piece needed to center on a sofa. For some reason, he says, “I’ve always wanted to involve a piece of furniture. Don’t know where the idea came from.” Though perhaps, he imagines, its turning up now might possibly be connected with his mother’s moving into a new home in November.

“How many ways can you use a sofa, aside from just sitting?” he asks. “The dancers took all kinds of crazy ideas and went for it.” They welcomed “messing around,” trying new variations—like a little twirl by Nell at the end of a line—that might be incorporated into the piece.

“They are all on the same wavelength, all inspired by the characters they have created.”

Among other themes that went into or came out of the piece, now entitled Convenient Arrangements, were the adjustments we make in relationships, some intentional, some after the fact. Jakevis and the dancers played around with the sofa and the characters that each dancer built out of the process, creating a structure and introducing “lots of foreshadowing—seeing something and only realizing later why or for what purpose it happened.”

Liane Aung’s persona is set off from the others and involves complex convolutions with the sofa. 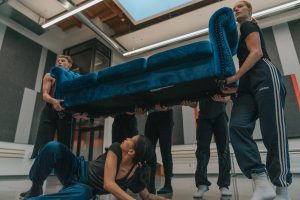 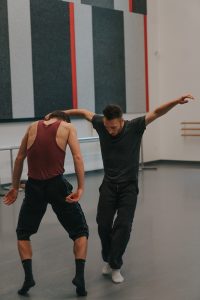 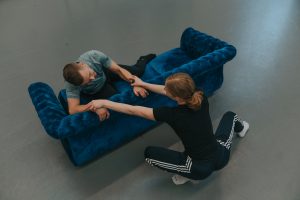 Jakevis is especially inspired by how problem-solving in the course of choreographing teaches “how to adapt” and creates “the opportunity to go where unexpected, to spark inspirational changes that flow better and call up more.” 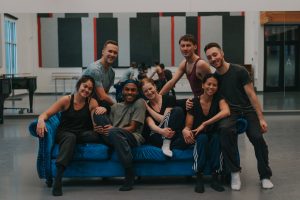