Chalnessa
is is a wonderful, quirky dancer, who takes to Olivier’s style like a bird to air.

She’s one of those friends of his who urged him to start a company of his own.
Not just for his sake, either, but because it’s wonderful to have time to work in a studio with someone, she says,to be the tool of a choreographer who is in the process of creating a work.

Olivier, says Chalnessa, has drive, want, passion. He’s not just a choreographer. “You have to encourage that.” At the start, back in June, she adds, it was lots of work. Intense. At least mostly. Fun too.
Everyone had to be on 110%.

“I love everyone he’s gotten together for this show. We work incredibly well together, though it hasn’t always been consistent because of time.”

Chalnessa, like other dancers, comments on the enormous attention Olivier pays to detail.
“It helps that we’re such good friends,” she says, “because I want to kill him half the time the says….and then a while later I’ll see, dammit, you were right.” He knows what he wants.

Many choreographers these days are just putting a series of steps: “Lots of time it’s just a class to music. Olivier has a real, distinct style. There’s whimsy, but it’s not cute. You need a strong person to carry his choreography.” And many dancers are great technicians, but in a mold, without well-developed characters of their own. 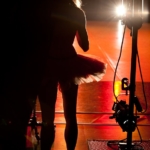 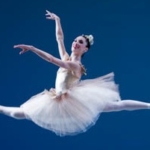 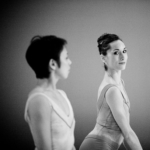 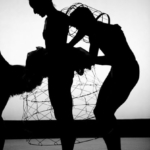 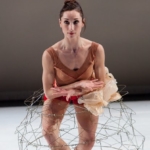 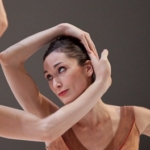 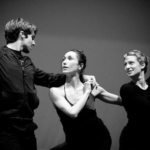 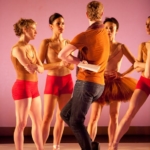 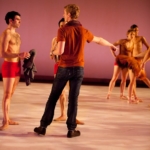 Chalnessa makes an interesting point when she says that Olivier is very precise about the movements he wants made, but he doesn’t impose how you should feel. “He doesn’t spend a lot of time outlining a character.” In the “get the boys section,” for example, where she and Hannah and Kylie are egging on three of the men. You could hardly get three more different woman.
“But as long as you have your feet and hands, etc. in the right place, you can fill in the steps with who you are.”
And Chalnessa loves to invent a character.

Sometimes for that reason she finds Balanchine hard, for example in Agon (although, as I know from watching her for years, she dances even the most un-quirky classics beautifully).

There hasn’t been enough time as everybody would have liked for 3Seasons, especially working with the new music—one of Chalnessa’s sections was finished just two days ago.

The upcoming performances, she said Thursday before the dress rehearsal, are “exciting and terrifying,” mostly because of the new music. After the dress Chalnessa said, “Five days ago, I didn’t know if we were going to be able to bring this thing off…” Then she added with an incandescent smile, “But now I know we will.”

And last night they did.