At first glance, Andrew Bartee looks like any lanky kid.

And then you see him move…

At barely twenty Andrew is the youngest of the Whimmers.
I was interested in what qualities led Olivier to choose him.

“He is smart, thoughtful and very mature for his age. Wisdom is priceless for a dancer, it takes years to get it. But he is light years ahead. Also, he is honest, sincere, dedicated and has a great sense of humor.”

A bit mischievously, I asked Andrew why he imagined Olivier found him mature.

“It probably is impossible to say,” he laughed. He thought for a moment, then added:

“I guess I feel it. It’s very real to me. The air I breathe. A gift—and that’s probably as much as you’ll get from me!”

The tone of his answer was itself revealing: modest but not embarrassed, self-assured but not self-important. As he said in an interview with the Everett Herald:
“It’s the music that takes me there. You are the physical representation of what is happening musically.”

Andrew is a native of Everett, Washington. He started dancing at 10, when a girl he knew suggested he try out for a Christmas Pageant. The first ballet he ever saw was American Ballet Theatre’s Giselle, that came to Seattle in 2003. His parents took him as a birthday present. His parents always have been supportive of his dancing “in every sense. They took my brothers to sports and me to ballet classes. It was never an issue. They made it work.”

At first it was fun but not something he imagined he’d ever do for a living. Then at around 16, he started thinking, “I could do this forever—and would love to.”
Not long after, he began to get serious notice for his work. In the summer of 2007 he traveled to Denmark, as the first recipient of the Flemming Halby Exchange with the Royal Danish Ballet School. Copenhagen, says Andrew, “is a beautiful city that you can get around in easily by bike or bus.” He lived in an apartment with a girl from school and saw the company perform in the beautiful new opera house, as well as the historic old one.
He took class with the very friendly company apprentices and got to know them well—“Their English was incredible”. In the course of his three weeks, he says, “I got very sore legs, and I got very strong”. The teaching was really different. He took classes from Laura Alonzo, sister of Alicia Alonzo, long-time head of Ballet Nacional de Cuba; Eva Draw, from National Ballet of Canada; and of course the Bournonville classes at the core of the Royal Danish Ballet. Andrew notes some similarity of Bournonville and Balanchine styles—both put emphasis on intricate legwork, but the Bournonville is slower; you need a lot of strength, while “the arms just stay—there’s a simple, stylized upper body.” He was quite taken with the long tradition of the Danish Royal Ballet. “You’re learning something ancient.”
For a dancer at the beginning of his career, Andrew has traveled a good deal in the line of work—in the Pacific Northwest, at Jacob’s Pillow, and in the south of France. The same year as Denmark, he won a Princess Grace Award for dance and was flown to a gala in New York.

“It was the 20th anniversary, so it was quite a big production.
I met HRH Prince Ranier and Princess Caroline, and many other noteworthy people. I was the youngest recipient that year, but was not shied away from by the older, more accomplished artists. The greatest part of winning that award was that it made me feel like what I was working towards was worth my time and effort. The recognition from such a respected organization made me feel like someone believed in me. Someone knew that I could be great. Someone wanted me to keep working hard and make something of myself. All this happened around that time I was trying to decide whether dance would be a serious part of my future, so the timing couldn’t have been more appreciated.”

Back at home, he was accepted in 2008 as a Pacific Northwest Ballet apprentice and now is a member of the corps de ballet. Whim W’Him adds a new dimension for Andrew. He has a lively curiosity about new forms of movement, different ways of dancing. When asked if he has favorite roles or styles, he says he is very open to trying a lot of things and being versatile. He doesn’t really have favorites, though there are certainly exhilarating moments, like in Rubies. “I like it all,” he says with his engaging grin. And when asked what else he likes to do besides dance, he replies first, without hesitation: “Eat!” 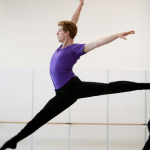 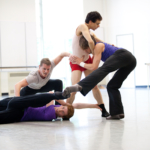 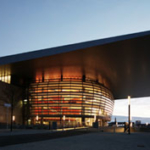 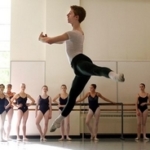 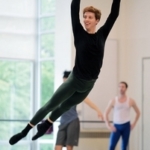 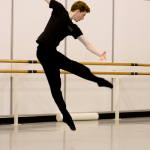 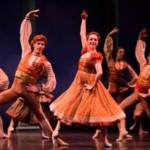