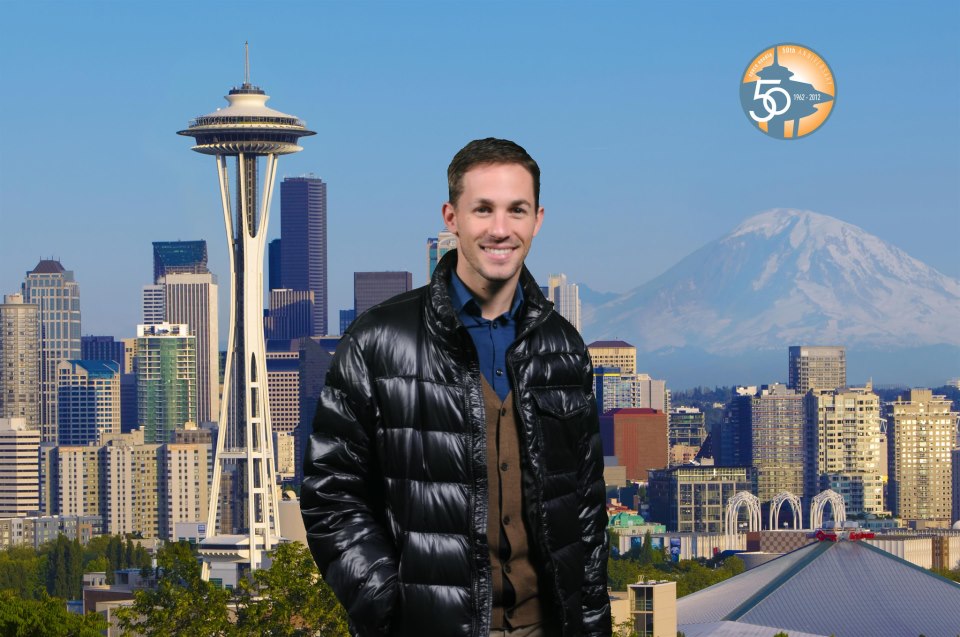 Aviad Arik Herman was in Seattle a couple of weeks ago to work with his costume designs for Crave, Annabelle Lopez Ochoa’s new Whim W’Him piece. The fact that many modern dance choreographers (including Annabelle sometimes) want their works to be clad in versions of street clothes, he noted, plays down the notion of “costume.” 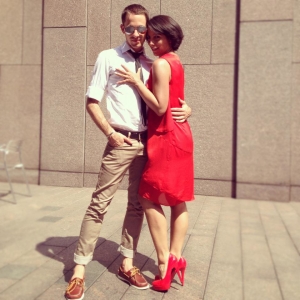 In conceiving theatrical designs, Aviad naturally seeks to provide what the makers of dance want for their works, yet he insisted he also hasn’t given up on believing in the magic that costuming and lighting can produce on a stage. But after he said this, it kept occurring to me how often it goes the other way too these days. In recent years a greater connection between fashion and performance/dance design seems to have developed. Some designers (including Aviad and Mark Zappone, who also has designed Whim W’Him costumes) create both. Dancers (of which Aviad is one) moonlight as models. They have marvelous bodies for showing clothes and know how to move in them. Things are way more mixed up and participatory now than they ever were before. It’s not that unusual to see highly theatrical clothing—widely varied, very individualistic— being worn off-stage and off the runway.

To cite just one example, a few weeks back at the Bellevue Arts Museum opening of their current High Fiber Diet exhibit, the outfits of some of the guests were examples of fiber art at least as ingenious and outré as the exhibits themselves.  (BAM Biennial 2012: High Fiber Diet) There are little stages everywhere. It’s intriguing, this continued exploration of the contrast/tension between our ordinary selves and the often very different selves we wish to project/become online or at a party or club. As in Annabelle’s Crave, more than ever we invent personae or at least seek to control and shape the way our selves are perceived by others. The “wiki” principle has invaded everywhere. Boundaries in all aspects of life are more fluid than ever before. 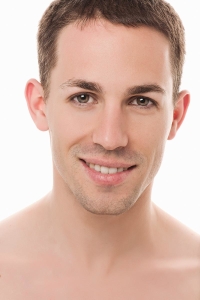 The criss-crossing of boundaries and the crossover from art to life and back again are personified by Aviad. He speaks five languages and understands another three. Born in Israel, he studied at the Bat-Dor Beersheva Municipal Dance Center, then later at the Royal Conservatory in The Netherlands. He has danced with KAMEA Contemporary Dance Company, Israel, the Gothenburg Opera Ballet in Sweden, New York’s Labyrinth Dance Theatre and the American Pacific Ballet Company in California, and toured the world with Les Ballets Trockadero de Monte Carlo.

As a dancer he wears costumes. He is also a costumer. This is his fifth time of working with Annabelle for productions at The National Dance Company of Spain, The Dominican National Ballet, and Washington Ballet, and he’s designed for other freelance choreographers, as well as such dance companies as Ballet Mainz and Ballet Chemnitz in Germany, The Swedish National Ballet School, and Philadelphia’s BalletX. 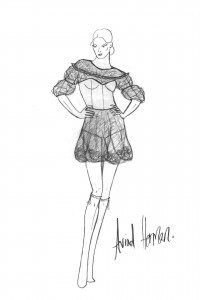 Aviad is both a lover of fashion and a designer of non-theatrical wear. Since childhood he’s sketched women’s clothes and is becoming more involved now in this pursuit.
He studied fashion design at the Folkuniversitetet Göteborg Art College, was a finalist in Fresh Fish in Gothenburg, Sweden’s annual fashion fair and contest for promising fashion designers. Recently he’s been fashioning clothes for Miss Universe Sweden—though on second thought, that too is a kind of theatrical dress: 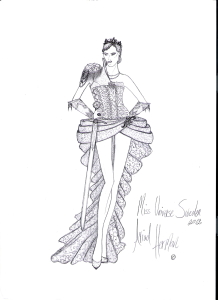 His having danced—still doing it—makes up a big part of what Aviad thinks about clothing dancers. He understands the need for the garments to be made for dancing in and what that entails. He knows exactly what is needed to make a garment easy to dance in.  But he also realizes that difficult costumes, stiff or unwieldy constructions, say, or masks, are sometimes precisely what a choreographer wants. “It could become boring always to have the same thing,” he says. “It can be a challenge, good for the dancer.

Luckily for Aviad, with his love of theatrical illusion, Annabelle’s new piece will have magic. It combines street/club garb and sparkly theatrical lighting. As she said, when she sent me some photos of the first fittings, “Glitter is the key word.” 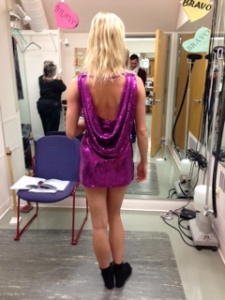 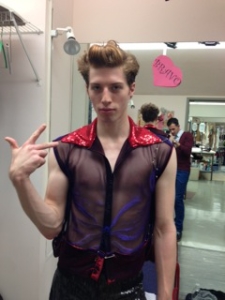 Aviad showed me samples of sequined fabric, something like chain mail made of soft cloth. A kind of netting turns blue or red or black, depending on how the light falls on it. The dancers will have glitter in their hair, perhaps on their faces, and lots of make-up. Costume/reality and artificial/natural distinctions are disrupted here, usual categories blotted out, the edges blurred.