This Friday night, May 29, 2015, 8 pm, at the Cornish Playhouse in Seattle Center, Whim W’Him presents X-POSED. This is the first time each of the three offerings in a show (all premieres this time) will have a different costume designer. Rob Newton, recommended by veteran designer Mark Zappone to Manuel Vignoulle for his RIPple efFECT, is doing costumes for the first piece on the program. To start with, Manuel told Rob that he wanted the costumes “to bring an idea of individuality as well as of blending with the whole group.

[As] if each person was influencing the group and the whole group changing that person, [as] if everyone was bringing his/her own color and splashing it on the others who also splash theirs, to create a unique rich color from everyone’s.” 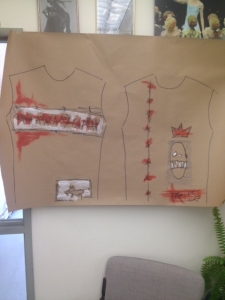 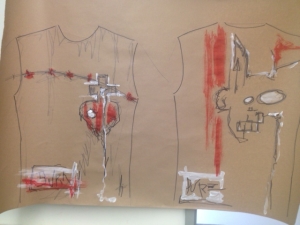 From the original sketches with their rather “tribal” feeling, Rob produced some lengths of rough cloth in a rich brown with red, black and white markings. After “lots of back and forth to find material that would work on the dancers (not too heavy to dance in but good to dye and paint on),” it was decided that rather than construct the garments from scratch, they would use purchased white clothes and will get the desired effects by applying color directly to them. 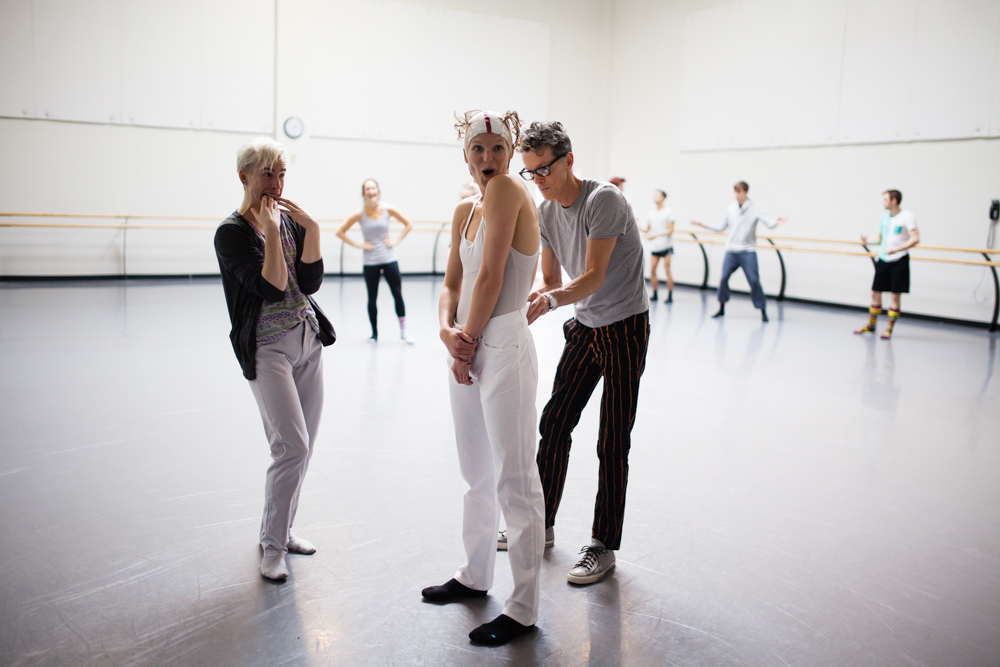 About the costumes for her piece, Black Heart, Kate Wallich says, “Each of them is different.” They are being designed and executed by black magenta, comprised of Mark Ferrin and his collaborator, Mary Anne Carter. Mark has designed costumes for Mark Haim, Jessica Jobaris, and Alice Gosti as well as others of Kate’s works, and he has also done stitching for Pacific Northwest Ballet, Oregon Ballet Theatre and San Francisco Ballet productions. The Black Heart costumes, too, are being built from ready-made garments. I still haven’t seen them or got any photos or sketches, but “It’s all athleticky mesh,” according to Kate, “layering and bagginess. There’s a reference to Gothicky and a mid-century, old world feel, in a new-age, hip, high fashion way.” (On another occasion, she summarized them for as “Goth meets school girl.”) The costumes for this piece are, in short, like Kate’s work in general, “dark, with humor.” The colors are monochrome— black, white, slate—”what I’m into now,” and she is “not sure how the costumes will interact with the piece yet.” That’s still to be determined in the days to come. 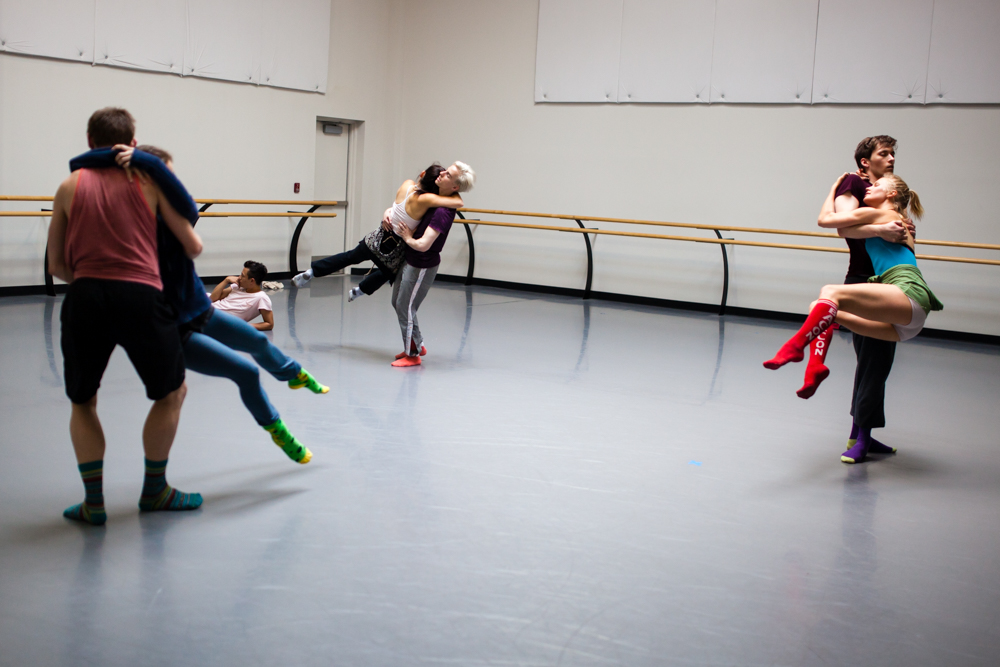 Can’t wait until Thursday’s dress rehearsal to see what dance, costumes, and lighting— liable to involve florescent pink balls of fire and/or other dramatic colors in Kate’s piece—will combine to produce. 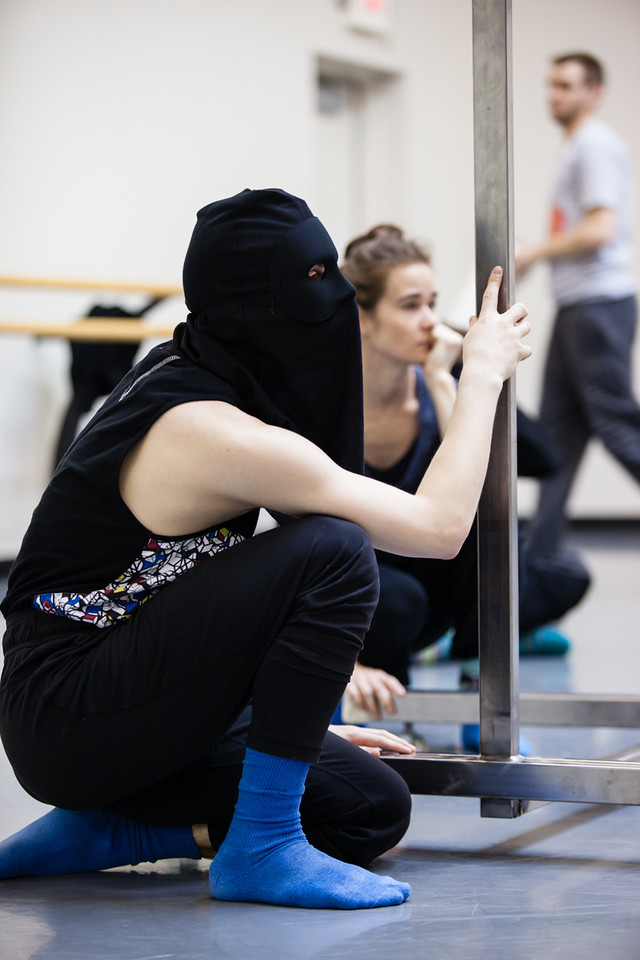 In the case of the evening’s third piece, Alone Is the Devil, Whim W’Him artistic director Olivier Wevers‘s newest work, black is the order of the day (or night). Olivier says of the dancers, “I want them covered head to toe.” He talked with costume designer Mark Zappone about “the idea of shadows.” 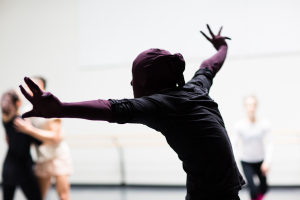 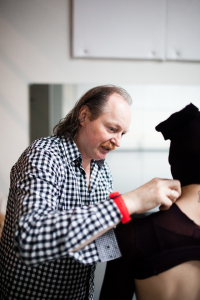 “Since they [the dancers] are each representing Jim Kent, the same person, we liked the idea of the costumes like shadows.” Various head coverings from hoods to eye-masks have been tried. “We are also adding layers to the costumes: straps, belts, knee pads, etc—to create the idea of the torturing that we put ourselves through to look a certain way for society. Which is also in connection with Jim’s body modification sequence, where the dancers are putting straps and costume parts on him, while the mirror moves, and Lara is being his reflection.” 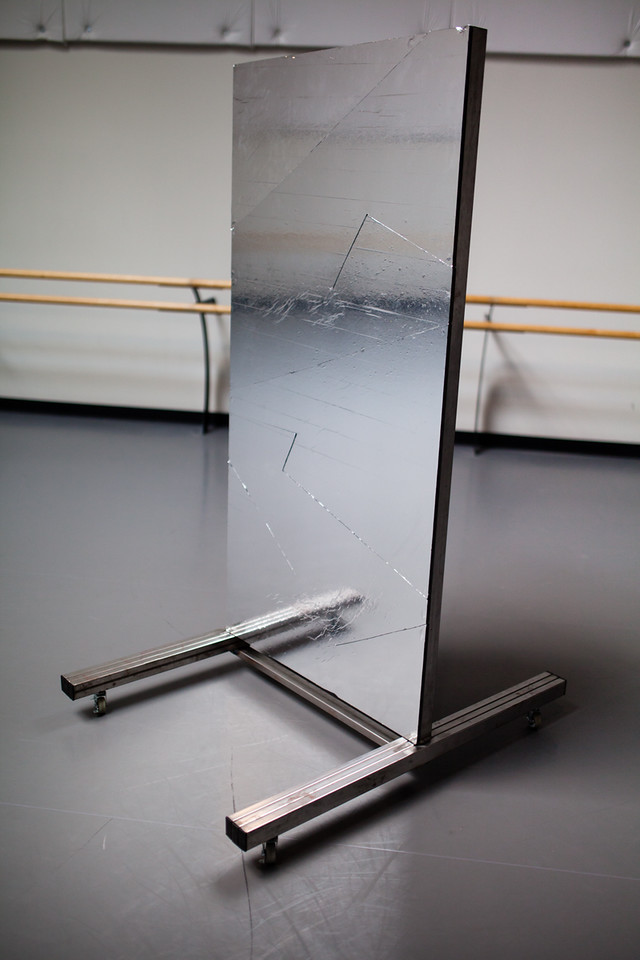 The idea of having everyone all in black, except Jim, “also works with the mirror idea; one side of it is reflecting, the other is black.” The mirror, built by Jonathan Houser, is a moveable frame onto which big shards of mirrored surface are attached by built-in magnets. Originally there was to be a painted figure on the reverse side. But, as Olivier says, “I just loved the black when I first saw it. It also creates something like a black hole…an anti-reflection…being pulled in. So I decided it was a better choice.” 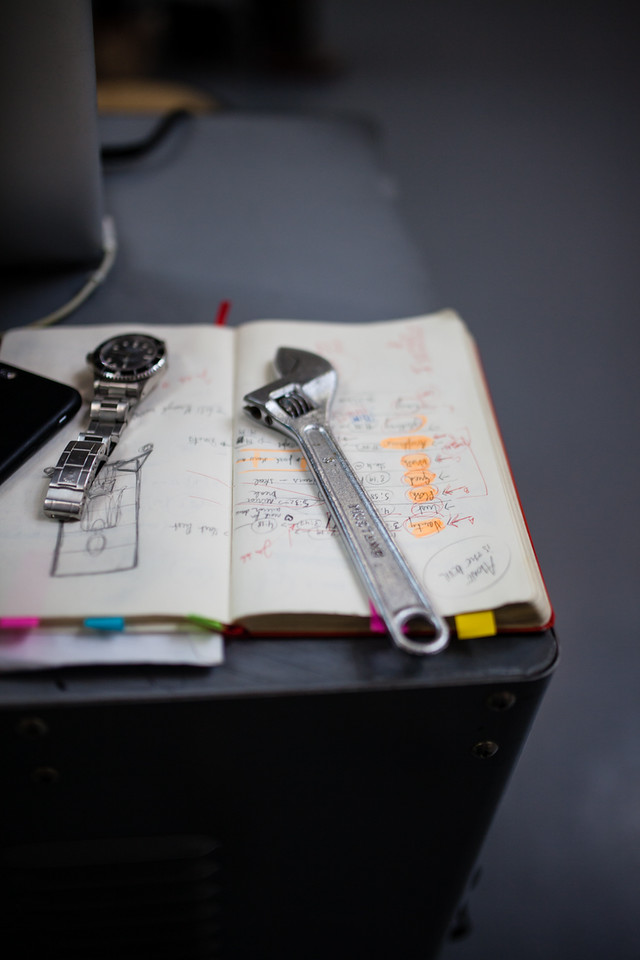 This week Whim W’Him goes into the theater, where the theater staff and the lighting wizardry of Michael Mazzola will work with choreographers, dancers, music and costume designers to hone and polish the show. Can’t wait until Thursday’s dress rehearsal to see what they will combine to produce!