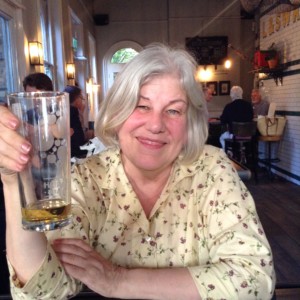 “There are those,” says costumer VAL MAYSE, “who like to buy things and rework them, but I’ve been at it so long I’d rather start from scratch.” She smiles. “And anyway I don’t like shopping.” Val’s costumes will be featured in Penny Saunders’s play-by-play, which opens Whim W’Him’s  SENSATION program at the Cornish playhouse, January 20-28, 2017. After working for a big costume house in New York, Val came to Seattle some 3 decades ago, where she spent many years at the Seattle Rep, as well as doing “overhire” work for Pacific Northwest Ballet. In her current position as costume specialist for the University of Washington School of Drama, she teaches classes in “Techniques of costume construction, including study of fabrics,” with an “emphasis on creating patterns by draping.” Val also designs and builds costumes for the Dance Department’s Chamber Dance Company and works with dance and drama students to produce designs for mainstage and workshop productions. It was through UW that Val met Penny, who couple of years ago performed with Chamber Dance and staged Nacho Duato‘s Jardì Tancat for the company, along with her Master’s student husband Pablo Piantino. Val was recommended to Whim W’Him as well by veteran costume designer Mark Zappone and says she is delighted to work with Whim W’Him. “The dancers are all so gracious (and graceful).” 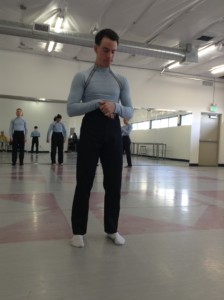 There’s a quite distinct art to designing garments that will work for dance, of course, since they have to be easily cleaned, tough as nails, and able to follow the dancers’ highly athletic movements without pulling or getting distorted on the body, no matter how convoluted its position. The costumer needs to know just how much give to design into a garment, depending on the fabric. The plain dark pants for play-by-play, are a favorite of Penny’s who likes this high-waisted style and gave Val a pair to use as an example. Tops with silvery slant zippers, the same for all the dancers, are in a lighter, blue-gray color and will have the addition of some understated abstract  design painted across the front. 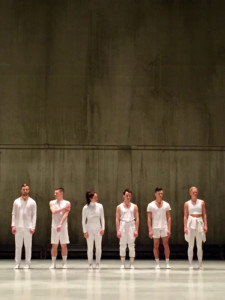 Costumes for Line Dance, the program’s middle piece, by New York choreographer Larry Keigwin, have been concocted by a totally different process. Larry’s inspiration for what the dancers wore to rehearse in the studio. One day he took a photo of each of them and said, “That’s what I want, but all in white.” That idea was put into action, with the pieces being bought retail in the dancers’ slender sizes, fitted to them by Whim W’Him artistic director Olivier Wevers and dancer Tory Peil at last night’s rehearsal, then okayed by Larry long-distance. 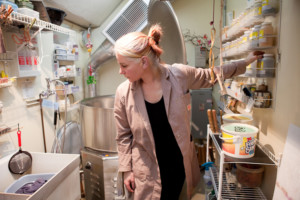 For the program’s final piece, Olivier’s Catch and Release, costumes were designed by costume designer CHRISTINE JOLY DE LOTBINIERE (who costumed the original 2011 Whim W’Him version of Annabelle Lopez Ochoa‘s Cylindrical Shadows and who now manages and designs the productions at Teatro ZinZanni). Says Christine, “Olivier and I met and talked about the artistic and emotional connotations of Kintsugi

[the Japanese method of mending broken porcelain with gold]—beauty in an object that’s had to survive. I love listening to Olivier’s ideas.” He’s both frank and definite about what he wants, but listens and is open to ideas. “I’m not offended,” Christine continues, “if he says ‘Do it this way.’ Olivier saw Tory as the catalyst, the strength, the glue that binds. Resplendent and high contrast to the others.” 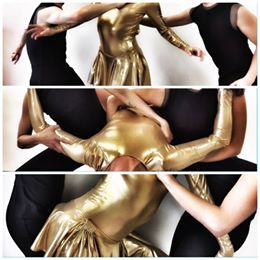 The costumes, she says are “a pretty straightforward interpretation of Kintsugi.” The jumpsuits worn by most of the dancers will have slight differences in the thin lines of gold that run across them (not yet added in the photos here), “an organic way of very subtly hinting at a break.” Christine doesn’t like to overly complicate the visual impression, but still to immediately draw the observer in. “I don’t want people to think too much or get hung up on the costuming.” She approached the task with the idea of “morphing of past and new. A 1950s nod to Dior, a slight reference to Japanese patterning, for interest and sculpture—I’m fascinated with their technique”—and then the gray mesh of the jumpsuits’ cap sleeves in “a more modern sensibility.” 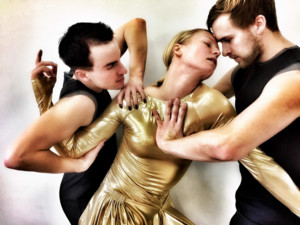 I asked about the fabrics used. For the jumpsuits, the material has to have enough weight to move. “It is in charcoal, an earthy and sensible tone, great to set gold and skin tones against.” She is aiming for simplicity. “A pure and simple line.” And for Tory’s gold costume? Christine laughs. “It’s cheap, glitzy, 4-way stretch,” spandex-type material, the kind used in skating or beauty contests. But the light shines off it beautifully. “It’s the cut, the style lines that make difference of whether it looks cheap or really good. The devil is in details.” As is the divine, such as the asymmetrical straps in back and flowing multi-length skirt, like liquid gold. “Tory is beautiful to build for. She has a gorgeous back.” Responsible for the pattern of her luscious costume is Renita Davenport, “a marvelous pattern-maker” she has worked with recently, of whom Christine says, “It’s wonderful working with someone with maturity and experience—a true collaboration.”