You could call Two Star Symphony a “pickup band,” less because it’s not a full-time ensemble—it is, in fact, long-lived and stable—than because its members seem capable of turning their hand to any sort of musical task or challenge, sometimes even with instruments they’ve never tried before. Whim W’Him has the good fortune to welcome from Houston this unique ensemble, who will play live on stage for all four performances of IN-spired (Cornish Theatre, Jan22-23 + 29-30) in Dominic Walsh‘s The Ghost Behind Me, over the next two weeks. (And come see them at Vermilion too, on Jan 27 at 9 pm.) 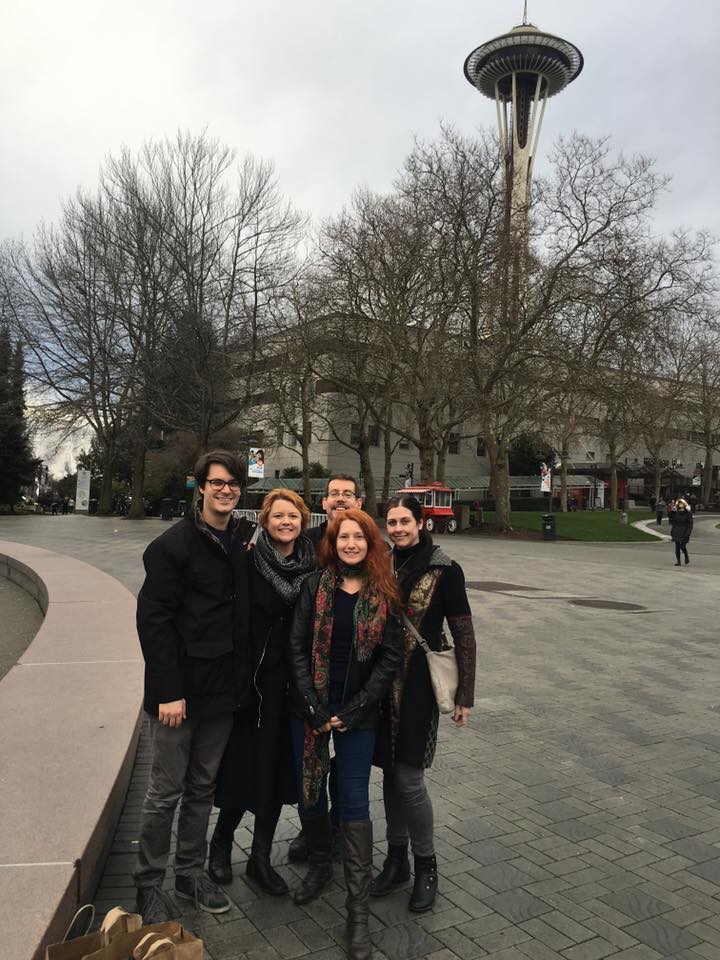 Here is how they describe their collective selves on their website: 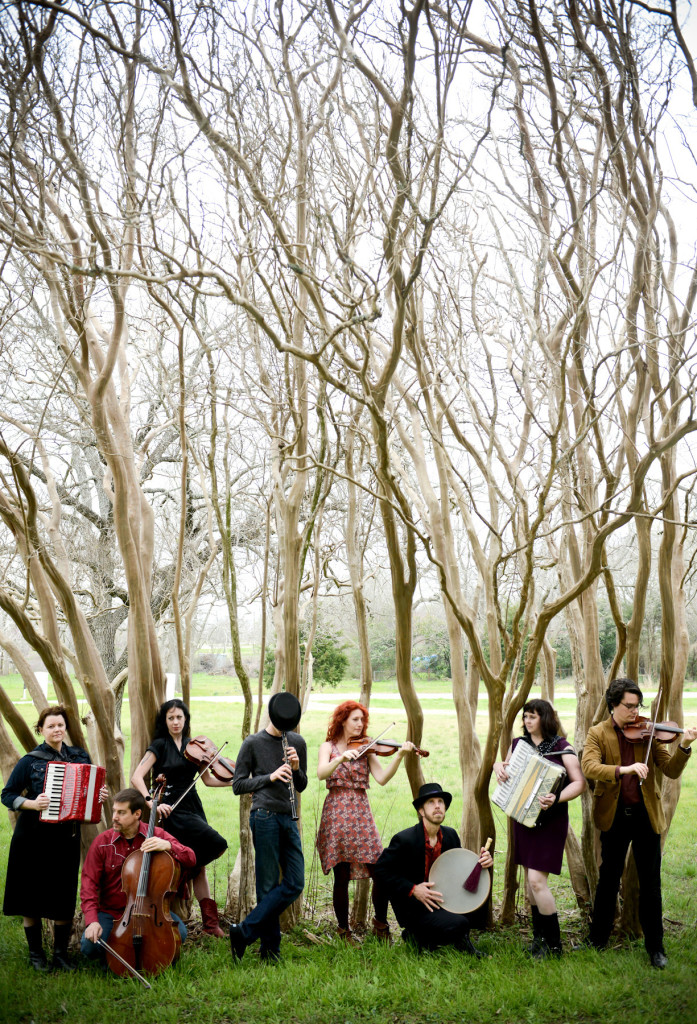 The group was born in October 2002, when Margaret Lejeune and Debra Brown performed as a duo at “an open mike for ice cream” at Oscar’s Creamery in Houston (purported to be the best ice cream place in town, but sadly now deceased). Margaret and Debra dressed as pirates and handed out eye patches to the attendees. It was such a success that they kept going. Deciding they needed more members, they invited others to play with them and met “cool people, each bringing something unique.”

The name adopted for their band came from “Dungeon Dance,” a song by Mary Timony, which asks “Will you dance with me/ the kind of dance in the iron shoes/ into the dungeon?” and ends:

The two stars above have taken your name
Christened by me.
it’s raining on the poison sea.
One star is Hate and the other is Love,
One is Sadness, one is Misery.
Will you dance with me,
On top of an airplane in the midnight sky
To two star symphony?

Over the years Two Star has remained fluid and changeable, composing/playing their original music for—among many others—classical and contemporary dance companies, puppet (and human) theater, silent films, a 2-part synesthesia exhibit, a crossover show with hip-hop artist Fat Tony to benefit the Red Cross of Japan, and several CDs, winning numerous kudos and awards along the way. Meanwhile, they all also have day jobs and often work with other musical or theatrical groups as well.

Five Two Star members have come to Seattle to play The Ghost Behind Me:

Margaret Lejeune, cello, was obsessed by the harp from age 5, when she saw Harpo Marx in a movie. From that time on, she kept asking to learn how to play a harp until she was 11, when she finally got the chance. At school, she also had to choose a second instrument, the cello. To her surprise, she got to love it, and now she’s hooked. When she’s not playing, she manages a deli in Houston. 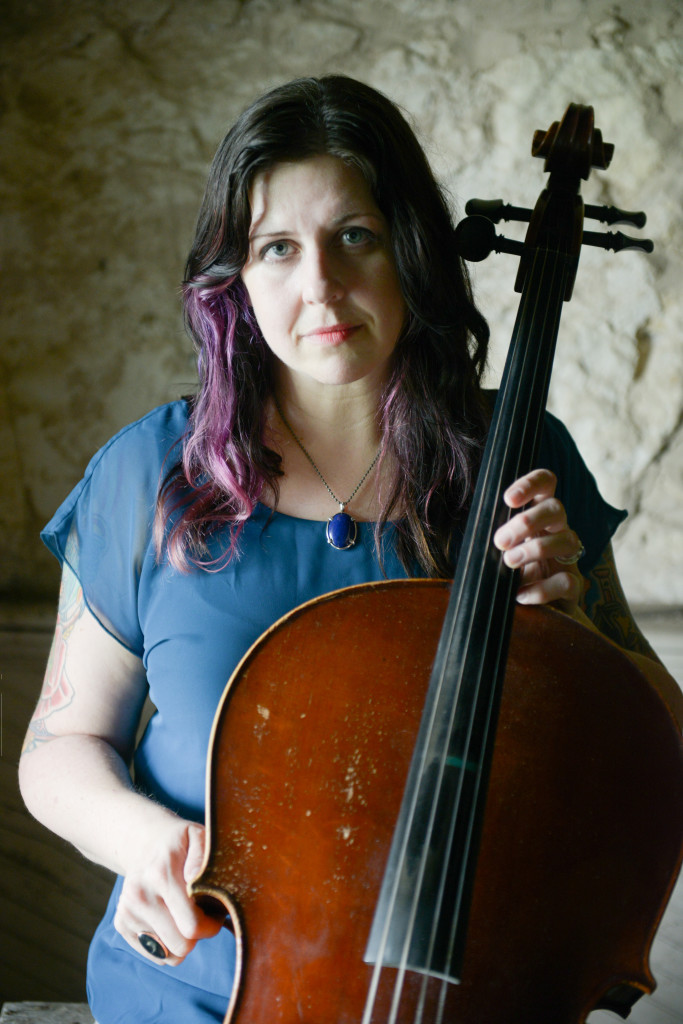 Jerry Ochoa, violin, began learning his instrument at 3, with a teacher from China. He attended the Houston School of the Performing Arts, went to film school, and made music videos. “Balancing lots of different things,” he says with a smile. He has just recently taken a job at Joffrey Chicago, managing Individual Giving. 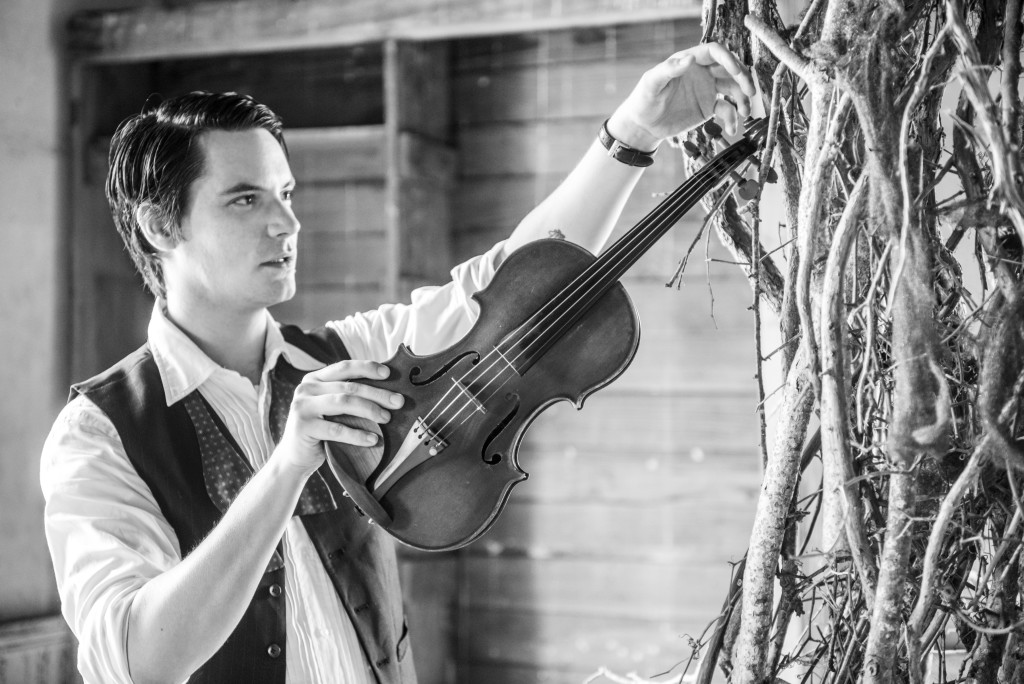 Debra Brown, violin, by contrast only started playing right before that ice cream gig with Margaret. It began when she was dating a ballet dancer, “who needed some awful sounds for a music video.” Debra supplied them to him, and her career on the violin was launched. Her day job is deli management, like Margaret, “same deli, but a different location.” 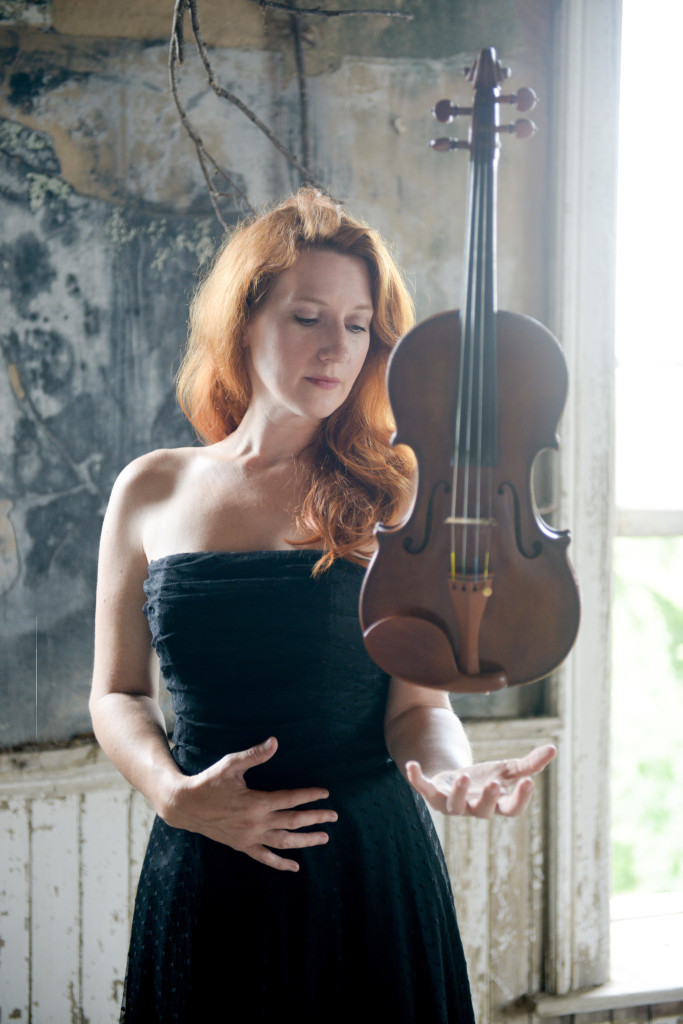 Cathy Power, glockenspiel, accordion, flute, percussion (and sometimes marimba and ukulele, though not for the current show) works at a private middle school in “administrative support.” She did “a tiny bit of music in college, percussion and choir.” Now she does a lot of work in theater, acting as well as playing music. Her natural curiosity and ability to “pick things up” has given her a wide range of musical possibilities. 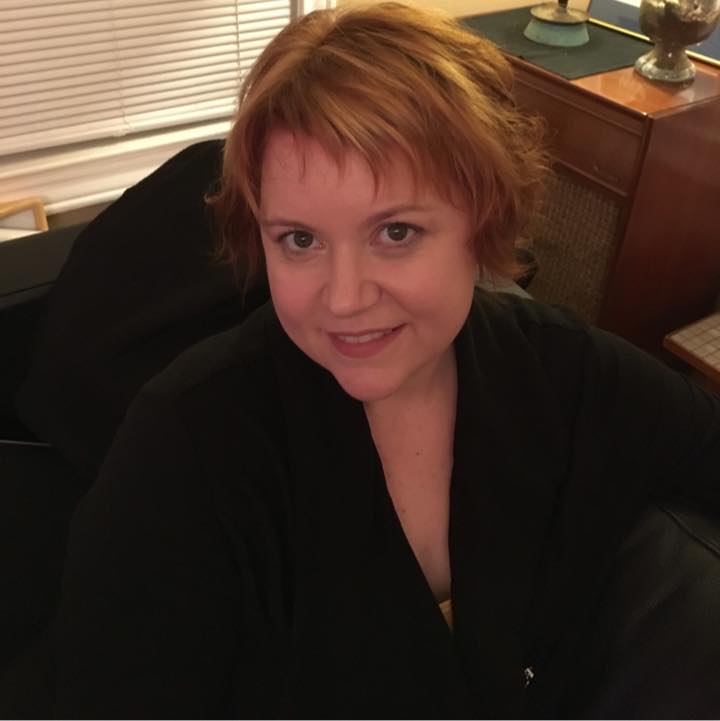 Chris Bakos, bass (and Cathy’s husband) is the most recent addition to Two Star. He attended the University of Houston and has “the fanciest” musical credentials. His experience includes 15+ years of work “in all facets of sound design from the technical creation and installation of custom systems for theater playback to the development of complex soundscapes using both existing and original music and effects.” In addition, he takes care of managing printers for large companies in and about Houston. He and Cathy are, say the other band members, “also accomplished vocalists.” 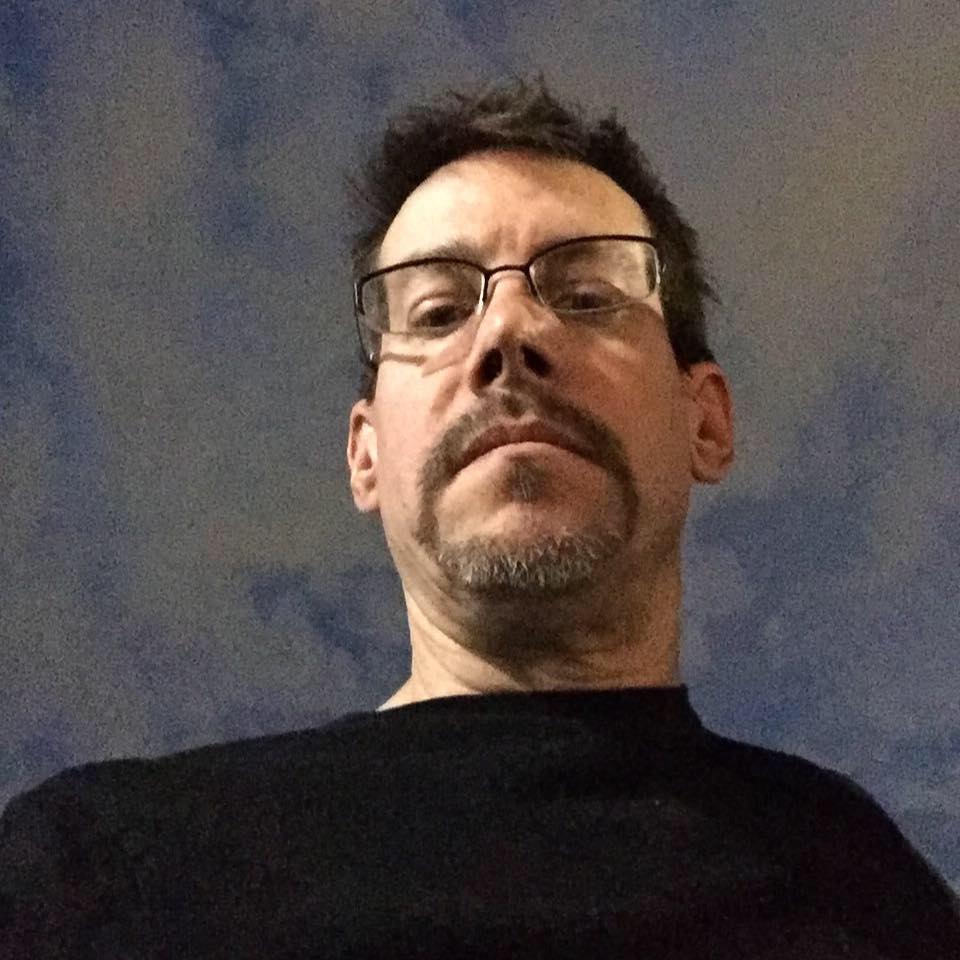 Two Star’s way of working is all their own. As described on their website, “Two Star Symphony’s dark, distinctive sound is a result of the writing style they employ and the instruments on which they perform. The band works differently than most classical ensembles in that every member is also a composer. Songs are written and arranged live as a group, with each player responsible for his or her own parts. By the time the songs are finished, the music is memorized. Two Star does not create or use sheet music, so the player is free to focus on the other members and overall sound of the piece.”

To start with, Margaret, who started out in punk rock bands, will usually throw out “the skeleton of a song,” and they arrange it on the spot. If there are difficulties along the way, they work them out together. “It’s a very collaborative style of writing.” 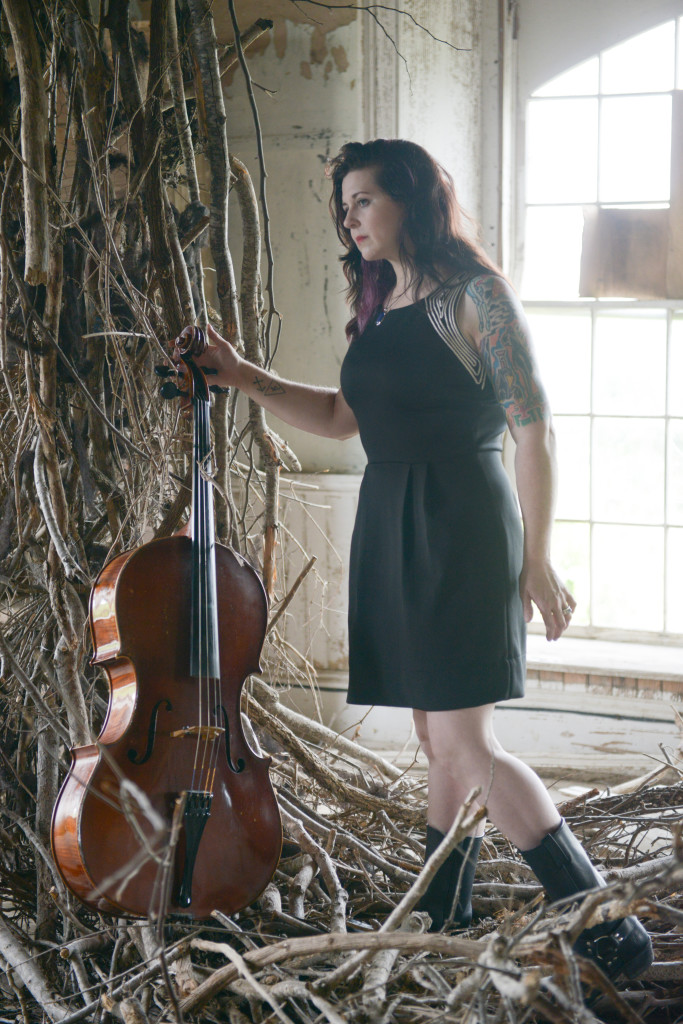 I wonder if they improvise at all during performance. No, they say, it’s all well established beforehand, “though there might be a section to mess with a little,” and someone supplies, “If I make a mistake I’ll repeat it so it seems like that’s how it’s supposed to be.” When the Two Star band play together, they fine tune their pieces and “really listen” to each other. “We write as a unit,” they agree. “it’s hard to do it separately.” 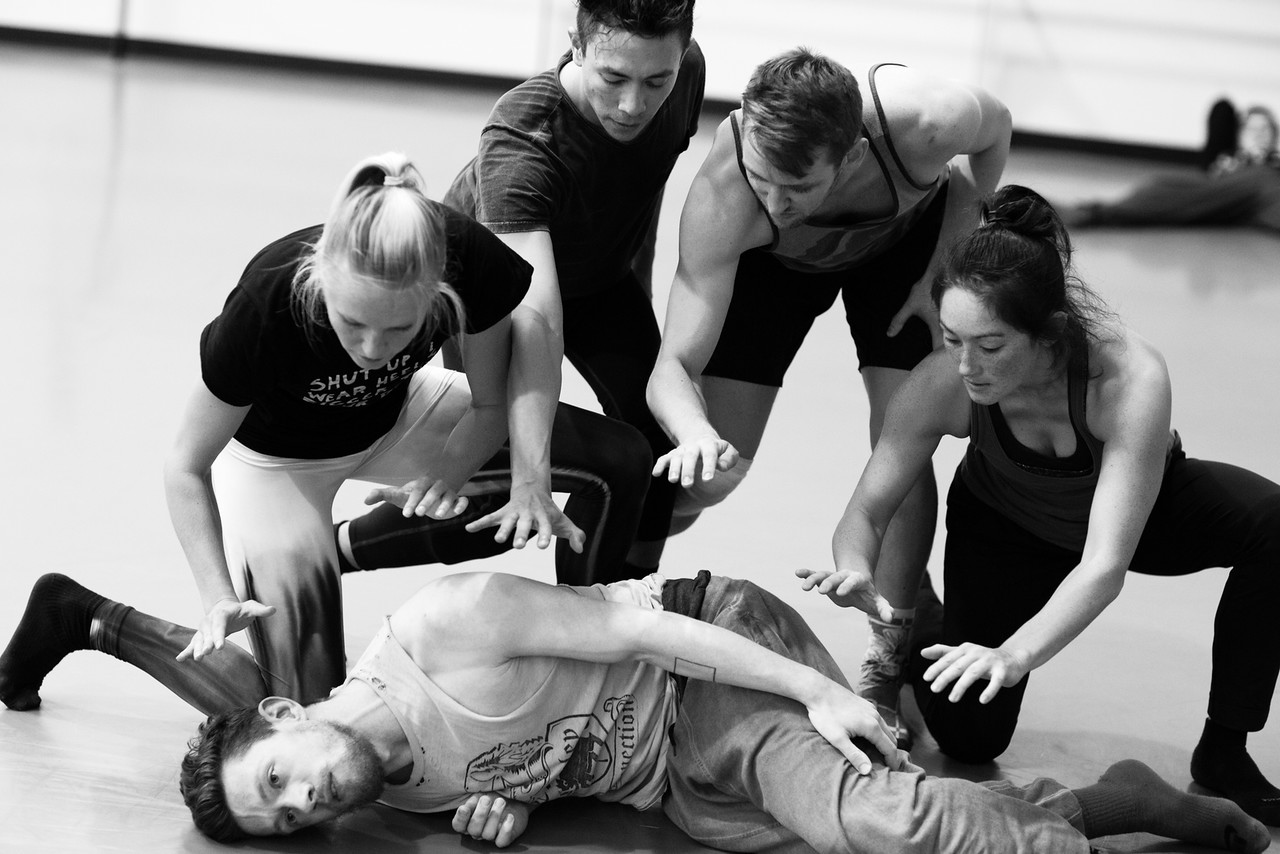 The Two Star Symphony is often visually inspired. On one occasion, they came up with their music based on the visuals of a piece Dominic Walsh had already choreographed. This time it’s the other way around. The music for The Ghost Behind Me was completed before he started working with the Whim W’Him dancers, though it was based on an earlier Two Star piece of that name with some new sections added. Dominic, the musicians say, is great to work with. “He’s figured out ways to communicate what he has in mind.” With Whim W’Him’s dancers too. I think of him pausing in Monday’s rehearsal, “I want to see if I can come up with some words to say…” In his program notes he thanks the dancers for making the piece together with him. And this is his fifth collaboration with Two Star in twelve years. “We pull it out of each other,” is how they put it. 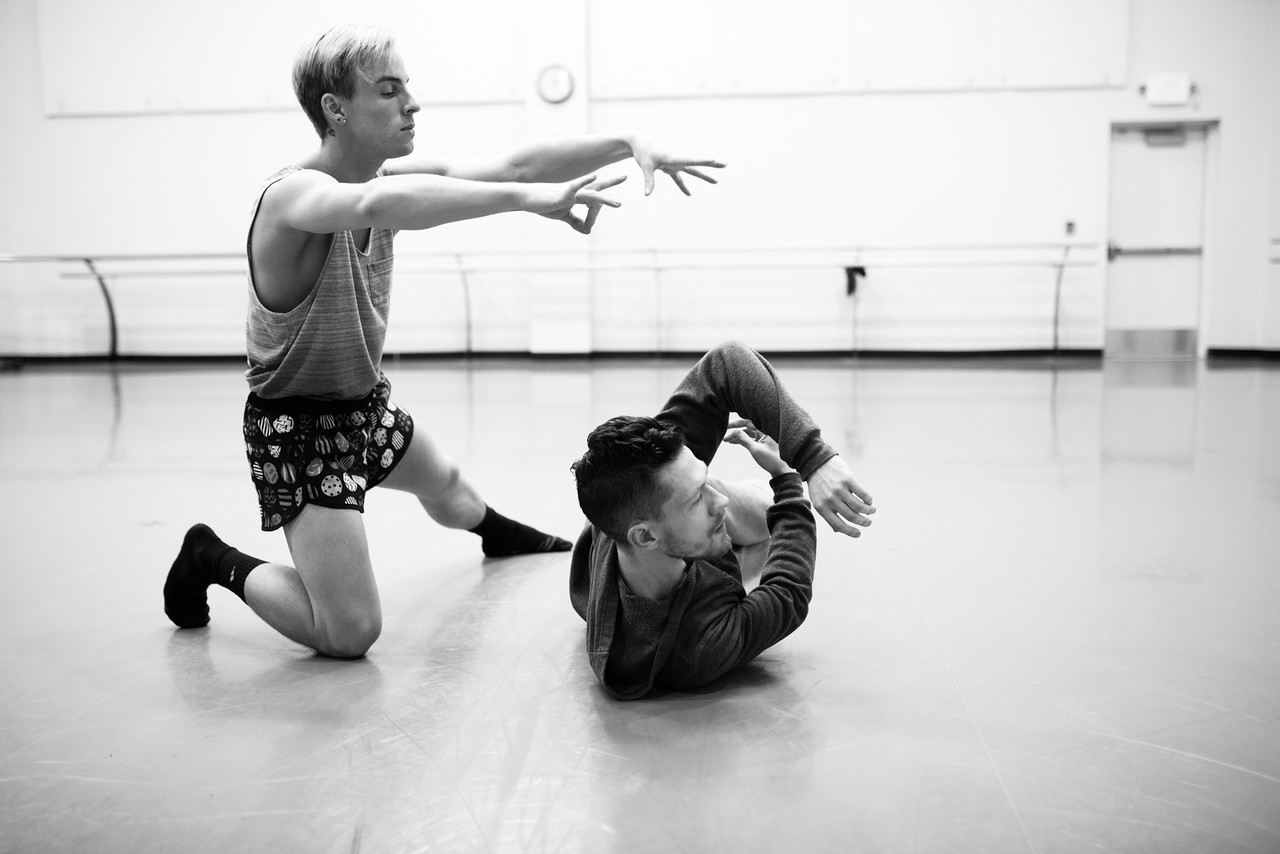 The Ghost Behind Me is about “saying goodbye to the past, which can haunt or help,” but from which you move forward whether you want to or not. The musicians found that “It was cool talking to Dominic” about this piece. They all, in very different ways, were going through some major life changes. “You never know what will happen,” they say. “It’s exciting and scary. When these things happen, you’re sad.” As expressed by the poignant glockenspiel interlude in the first movement, “You feel like everything is over and ruined,” but then when it comes back at the end, “it’s in a different key, simpler, like starting again.” Half-ironically/half-heartfelt someone mutters, “a tiny flower.” Another voice adds, “There are always a lot of ghosts in our work…” 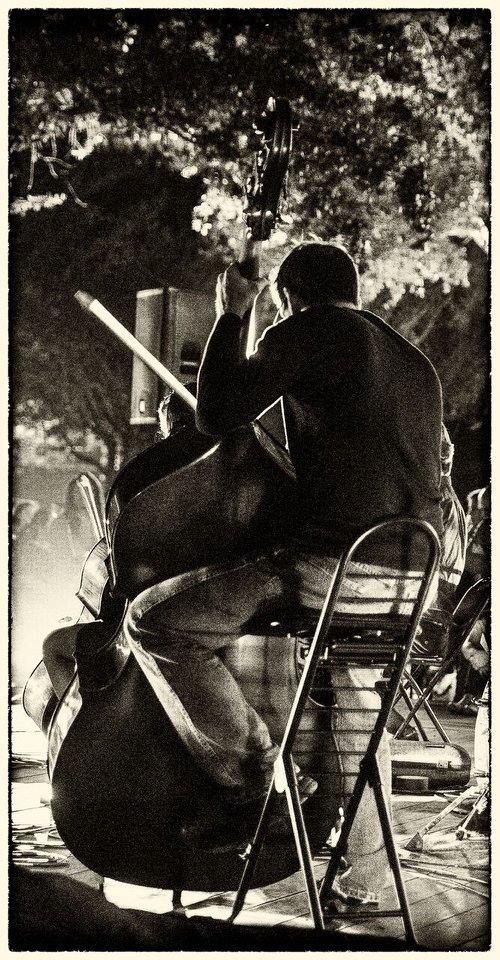