Early on in the first rehearsal, last November, for what became Joinery—opening tomorrow as part of Whim W’Him‘s CONFIGURATE program—choreographer Gabrielle Lamb invoked some arresting images, showing as she told the dancers how to lie along the floor, the hand of her right arm up  over her head, outstretched hand. “Feel how the palm changes to conform to the shape of what it’s moving over.” Putting her right hand on her knee, she continued, “Notice the surfaces contacting the floor. Let go. Connect more surfaces to the floor. Find the most efficient path to the other side, very much like an octopus on land.”

As she spoke, she got up and walked among the dancers who, along with Patrick O’Brien her helper and a member of her company Pigeonwing Dance, were continuing to embody her words. “Hands off the knee. Imagine spreading butter. You need to cover the waffle that is the floor. It’s different on a flat surface. What kind of contact? Get other parts—the curve of the neck—that would prefer to arch away from the floor. Extend the radius of the butter maybe 3 feet around you.” 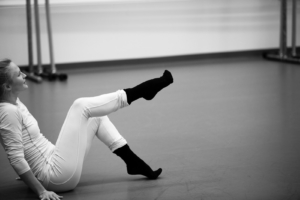 “Shoulder, elbow, wrist have to work together.” Gabrielle who is exceedingly narrow, thin and flexible with a beautifully arched back. Although she says she has a hard time knowing what she’s going to do when entering the studio for the first time, each of her ideas is clear and detailed, as in an exercise where the dancers had to keep an imaginary water bottle spiraling in one direction around them, to the other hand, both hands, behind the back and so on. 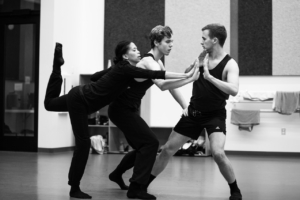 “With the hand out of sight be aware of if it would be vertical. Now turn the imaginary bottle into an imaginary book and balance it on your foot. Then toss it to some other part of your body, even if that’s not actually possible. There’s a combination of mobility and stability that you have to attain.” Then she asks, “Within this, what makes you feel more like dancing. You may need to abandon a bit of the task—which is only there to find a new way of moving.”

As to the sources of the piece that premieres tomorrow (Jan 19, 2018), Olivier asked the other two choreographers to focus on love, compassion and empathy, as he was. During the process of creating, Gabrielle wrote to the dancers in December about her evolving thoughts.

between the roof planks

of this ruined house.

So, in summary, ruptures can be repaired, and they can also open space for something resilient and unexpected to grow. 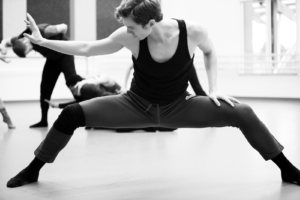 The ideas grew, faded away or changed into Joinery. In thinking about the broken world, a world with something the matter with it, Gabrielle says, “I tried to design some base movements interesting to look at, and in this case the broken things being people, being put together and then taken apart.” 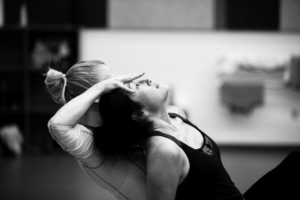 There is an evolution, natural momentum and patterns. One gets the sense of a subtle balancing between what feels right and organic and what she calls, “necessary surprises,” with an end result that  is “both not predictable and inevitable.” 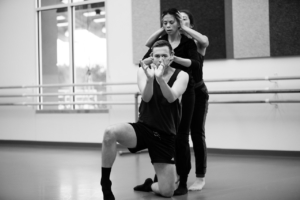