at play with Brahms – Olivier Wevers in the studio 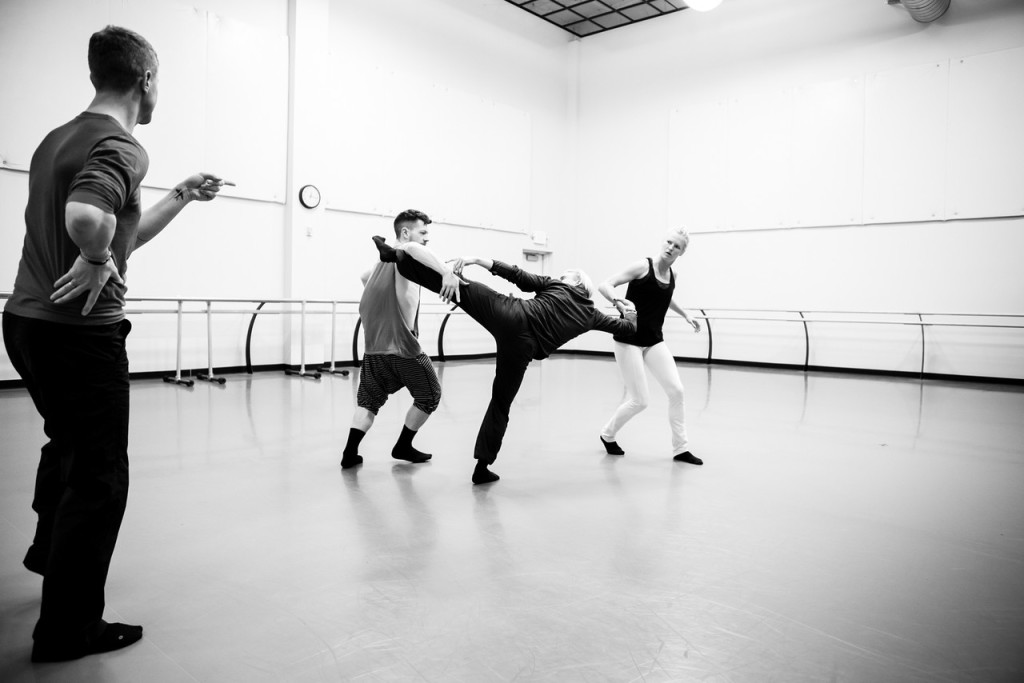 For the second time in exactly a year Olivier Wevers, Whim W’Him’s artistic director, is choreographing to the Brahms Violin Concerto in D Major. “It’s a beautiful piece,” is all that he will say about what attracts him to it. For Olivier’s earlier creation, We are not the same (January 2015), composer Brian Lawlor stretched, reworked and overlaid with new sounds the second movement of the concerto, as well as parts of two other Brahms works. Now Olivier is setting the first movement, to premiere in Whim W’Him’s IN-spired program (along with new works by Mark Haim and Dominic Walsh, January 22-31, at Cornish Playhouse). “I wanted to use the pure music this time,” he says. And Brahms and Tights, the title of his newest piece, is also pure dance. 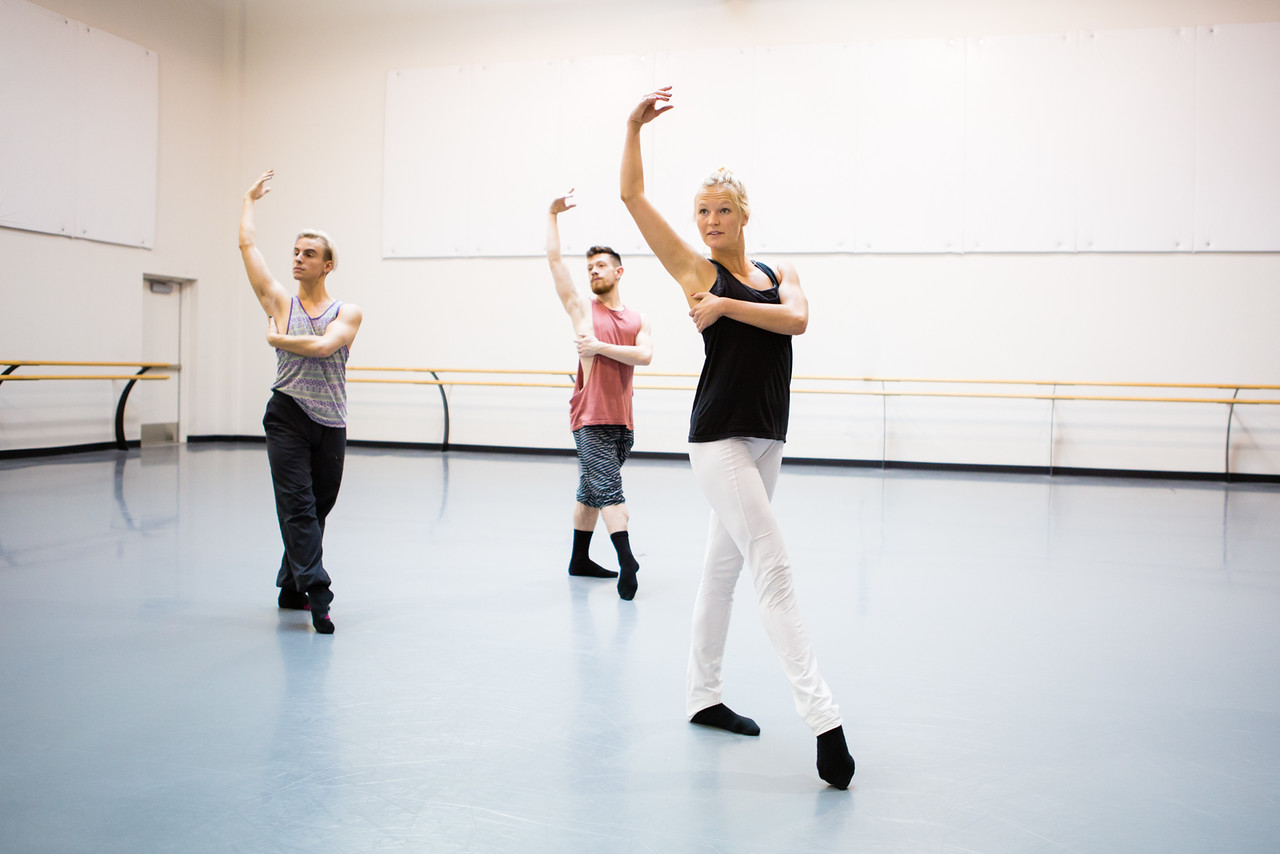 “I’ve been doing lots of narrative. This time I’m showing off the dancers, seeing what they can do. I’m really into that now, not to be stuck to a concept.” With Brahms and Tights, he has no story to tell and no theme, beyond listening and responding closely to the music and experimenting—overturning expectations. And he loves the grittiness of the rather “raw” recording he is using, the way you can hear the rasp of strings, rustlings of musicians and audience response. “It’s fascinating,” he says.

So he is playing with structure, trying out “different partnering, groupings, formats,” and in general finding ways to introduce the element of surprise and change. “I’m seeing one pattern,” he says, “and another one appears.” Two dancers may be entwined in an intricate duet, which, as a third joins then a fourth, fifth and sixth, transforms into a diagonal line streaking across the stage, but soon dissolving into a wedge-shape or little clusters of two or three. The dance sections don’t necessarily begin or end with musical phrases either, and at times the tempo or mood of the movement are in contrast as well.

More than usual in Olivier’s work, there are multiple turns and jumps and dramatic lifts in this piece. Mia Monteabaro and Tory Peil spin or leap gazelle-like. Jim Kent soars like an arrow toward Kyle Matthew Johnson, who catches him mid-air. Patrick Kilbane and Justin Reiter raise Tory high overhead.

The atmosphere is fast-paced and exciting, surprisingly varied and expansive considering the small number of dancers. “I’m a bit scared of it,” Olivier confesses, “I don’t have that much time. But I’m not going to stop now or dumb it down.”

And this week, the element of surprise entered into the creation process from an unexpected quarter. At the most recent rehearsal, Justin, who has been suffering from back issues recently, was out for the day. In the interests of rest and quick, thorough healing, Olivier asked Thomas Phelan take over for Justin in the Brahms. 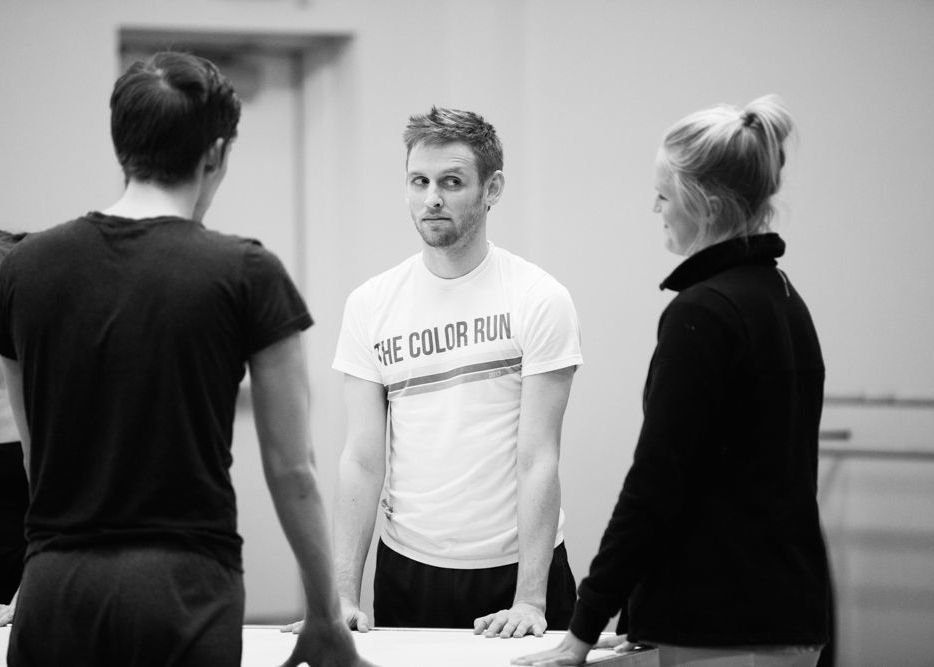 It was astonishing how quickly and smoothly the change went ahead. Thomas—in one of those daunting feats of memory that dancers accomplish so casually—seemed more or less to know Justin’s part already. Adjustments were made to various sections. All the dancers focused intently on figuring out how to handle the ripple effect of this major alteration. Within half an hour a new and vibrant version of the piece was falling into place.