The days of our future stand before us;
They wait, like a row of burning candles:
Golden, vivid, and warm.
The days of our past remain behind us;
They linger, in a row of extinguished candles:
Those closer to us are still smoking and curved,
Expressionless, melted, and cold.
I will not look at them; it would sadden me to see them now,
And remember their original light.
I look ahead, to my candles that wait and glow.
I will not turn back, lest I see the past and shudder:
How swiftly the dark and smoldering line lengthens,
How quickly the series of stifled candles grows. 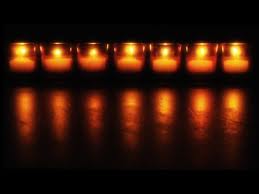 Candles is the first in a suite of poems by the renowned modern Greek poet Constantin P. Cavafy, chosen by Eric Banks as the text for his new composition, Approaching Ecstasy, Whim W’Him’s upcoming collaboration of choral music and dance. Conducted by Eric Banks, sung by The Esoterics, played by harpist Melissa Achten and the St. Helen’s String Quartet, choreographed by Olivier Wevers, and danced by seven Whimmers, Approaching Ecstasy will premiere May 18-20 at Intiman Theatre in Seattle.

In answer to a query about how this project got started, Eric Banks emailed me the following story of its genesis:

“Cavafy has always been one of my favorite poets. In the summer of 2008, I traveled to Alexandria, Egypt, and made a pilgrimage to Cavafy’s flat (now a museum), where I was surprised to be allowed to sit at his desk and leaf through his manuscripts. Ever since this trip, I have been reworking Cavafy into sing-able English. Eighteen of the poems have found their way into this piece.

“Shortly before I left for Egypt, I was introduced to Olivier (through our mutual friend, Judy Kitzman, who also worked at PNB at that time). At our first meeting, I remember showing Olivier some of Cavafy’s poems, and he was immediately inspired to collaborate on this project. BTW, this is before Whim W’Him even existed. 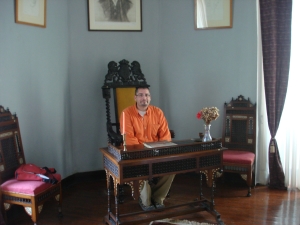 “Finally, after years of talking about it, we both identified a swatch of time during which both Whim W’Him and The Esoterics could work together to mount his performance. So, with the help of a Seattle CityArtists Award, I began to compose the piece last May. It’s been a long journey from my initial translation and selection of the ‘libretto’ to composing (which finished in February). Now we are rehearsing, scheduling, choreographing, recording, and soon: performing!“

Constantine Petrou Photiades Cavafy was born in Alexandria on April 29, 1863, of an illustrious and cosmopolitan Phanariote family with connections that spanned Europe. The youngest of seven brothers, he had a peripatetic childhood and youth, spending time in England, Constantinople and Egypt, but he lived most of his life and wrote most of his poetry in Alexandria. By the time he reached adulthood, the family fortunes had been in decline for more than a decade. In 1892, at almost thirty and after a stint in journalism, he was hired as a temporary clerk in the Third Circle of Irrigation at the Ministry of Public Works of Egypt, since his Greek citizenship excluded him from any permanent position. As the official website for him remarks, “Being an assiduous and conscientious worker, Cavafy managed to hold this temporary position (renewed annually) for thirty years.”

Cavafy was a curious combination of conscientious, ‘up-tight’ businessman-bureaucrat and free-thinking, adventurous poet, sensualist and gambler. He published individual poems in newspapers and periodicals, but collected them to be privately printed as broadsheets distributed only to close friends. Most of his important poetry was written after the age of 40.

A lifelong smoker, Cavafy was diagnosed with cancer of the larynx in 1932. His larynx was removed, to no avail. He spent the last few months of his life unable to speak. Of his apartment, nearby to the Greek Hospital where he died of the disease on April 29, 1933, his 70th birthday, he had written, “Where could I live better? Under me is a house of ill repute, which caters to the needs of the flesh. Over there is the church, where sins are forgiven. And beyond is the hospital, where we die.”

Here is Eric on how he picked the Cavafy poems to include in Approaching Ecstasy:

“The poems that I have chosen describe what it must have been like to be a gay man in Egypt a century ago. Many of the poems are autobiographical, about lovers that Cavafy met and knew. Some are fresher (written during Cavafy’s youth), and others were written when he was older (and therefore describe his trysts through the filter of memory). Still others of these poems are not so much about love as they are about
fear – the terror of being found out, and the hope that some future society will be more accepting of the gay lifestyle. For me, the title Approaching Ecstasy (a phrase found in a couple of these poems) is twofold – it captures Cavafy’s sensual descriptions of his youthful trysts, as well as his optimism about the future of social openness. I realize that for some, this subject matter might be controversial; I maintain that these poems are much more about remembered beauty than sex. These verses are clandestine, courageous, inspirational, and intensely personal, and I cannot wait to see how Olivier and Whim W’Him are inspired by Cavafy’s life and poetry.”

Tickets for Approaching Ecstasy are now available at:

Next up, on Friday: Olivier Wevers’s newest work, for Grand Rapids Ballet Company,
to be premiered next weekend in Michigan.