Next week is opening night for Approaching Ecstasy, Whim W’Him’s inventive collaboration with The Esoterics (Intiman Theatre, May 18-20 www.Brownpapertickets.com ).

First taste of the theater this last Tuesday and Wednesday nights. Quite a mass of people to deploy. But without backdrop or wings, the space is larger than one thinks. Though the apron that thrusts into the hall, covering the orchestra pit, will not have a special marley dance floor that is easy on dancer’s bodies and so won’t be used for dancing, it adds to the overall effect of bigness. 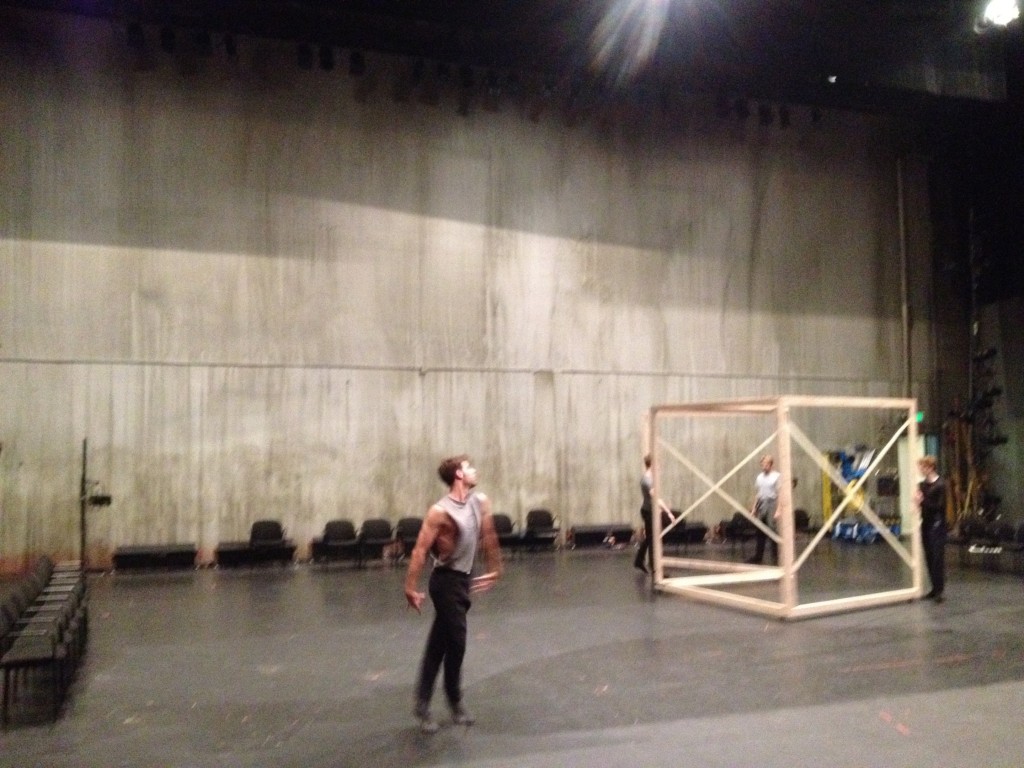 Simple black chairs are ranged along the side walls, in front of the lighting apparatus and backstage storage areas, which will be covered in plain black curtains (rather than the usual wings). The vast cement back wall is bare and will be left that way. Constructed in two long horizontal sections, one above the other, the wall is streaked with greenish water marks in serendipitous patterns. “Cool,” I heard several people say.
It reminds composer Eric Banks of a sea wall. A highly appropriate evocation of Alexandria, Egypt, where Constantin P Cavafy—whose love poetry is the centerpiece of Approaching Ecstasy—lived most of his life. It also calls to Eric’s mind the new Alexandria library, finished in 2002 to recapture the spirit of the ancient library of Alexandria, which burned down in the Roman invasion of Egypt in 48 BC. The new library is constructed of concrete and etched with quotations in many languages.

There’s no marley this week even onstage proper, so the dancers are just marking.
Stage time is a kind of marking too, getting the feel of the place and blocking general movements of singers in relation to dancers, and everyone with respect to set elements. Lighting designer Jeff Forbes is here too, checking out the lay of the land and working with stage crew and Whim W’Him artistic director Olivier Wevers on the light plot.

From 7:00 to 9:00 pm on Tuesday, the full choir is present. The whole work is gone through to check out sound and to uncover any quirks of the theater with regard to the particular setup of Approaching Ecstasy. Where/when singers stand/move/sing has to be meticulously planned for each poem, as it is sung in English and sung/danced in Greek.

The instrumentalists (St. Helen Quartet plus harpist Melissa Achten, not present tonight) will be stationed at the upstage left corner. In one section, the singers at the far end of the octet downstage right cannot hear the keyboard at all. Consulations take place on how to handle the issue. When that same group sings one of the crucial a cappella English translations, their sound is muffled for audience members on that side of the hall. When the singers are moved into a diagonal line across the stage, acoustics greatly improve and that segment of the dance is nicely framed. And so it goes all evening. 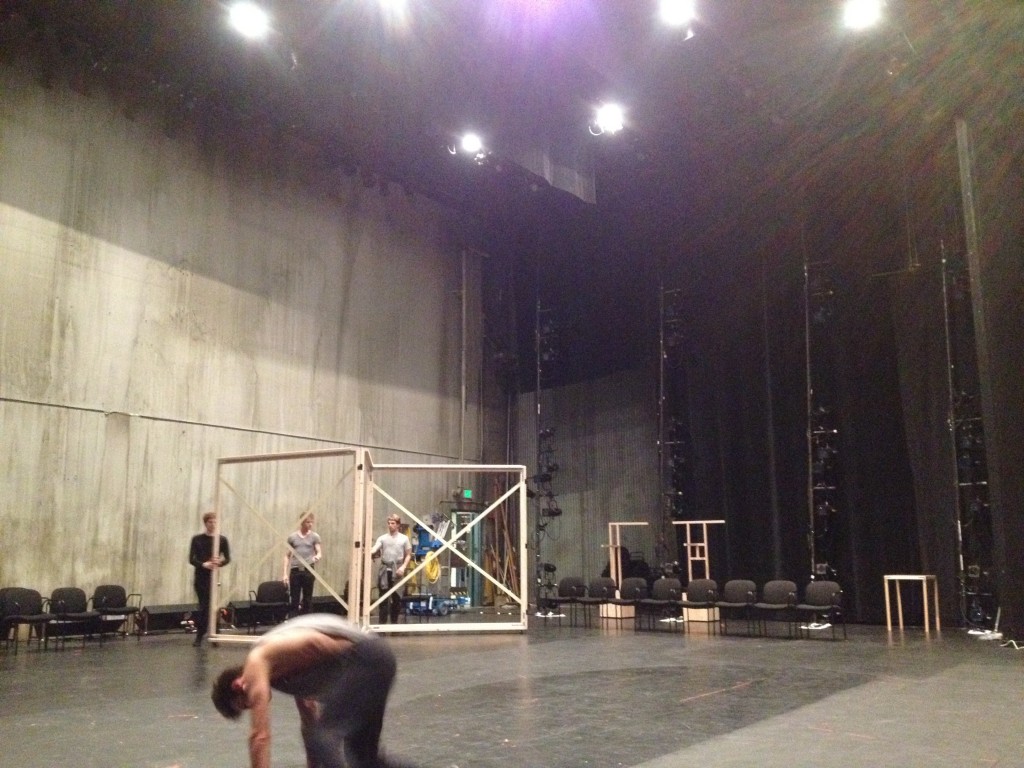 On Tuesday, it is the dancers’ turn to work on their own logistics. (Only a few singers are present, just watching.) This is the first time the dancers have seen and worked with The Box. An 8 ft. by 8ft. and on casters, it will play a central role in many of the vignettes. For the show, The Box will have two opaque sides and two clear ones. For tonight, set designer Casey Curran has marked each opaque side with a masking tape X, so the dancers will get used to which ones they can and can’t go through. One corner of The Box is fixed at a right angle, and the other two sides are openable. The structure can spread out flat into a large four-paneled screen; fold up like an open book with the outer wings pulled in; or turn into a proper box, with a hook to hold it in place. A clever and versatile design.

Between segments, The Box needs to be wheeled into place for the next poem.
How it is moved is part of the overall choreography. Some of the sections also involve six “mannequins,” wheeled cubes with skeletal structures, half clothes-tree, half-sculpture. All six dancers (besides Kaori Nakamura, who dances a different kind of role) have one, and they all have to synchronize not just their own movements but their mannequins’. The wheels make a lot of noise, something that will have to be sorted out.
Andrew Bartee tries out his pas de deux with a table.

At the end of the evening, at 9:00 sharp, Olivier says quietly, “So dancers, let’s get off the stage.” The rules are absolute, timing exact. They quickly vacate the space. Kaori picks up Olivier’s papers (lists of poems with notes on the idea/mood of each, lighting plot sketches, schedules, notebooks) and moves them off the apron.
A stage hand brings in a tall, bright, lantern-like light on a pole and places it centerstage. The theater clears. Except for the lone lamp, everything goes dark. 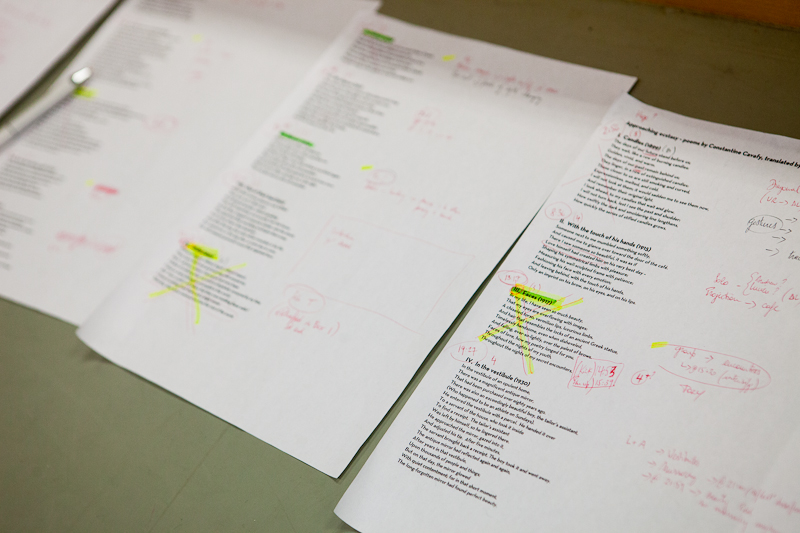 Next up: Casey Curran and set design for Approaching Ecstasy