In the week ending October 10, Annabelle Lopez Ochoa was in Seattle again, for the second set of rehearsals on the piece that Whim W’Him will premiere in January. Recently I caught up with her via email from her home in Amsterdam, where she had just returned after “an intense week in Seattle and 3 crazy days in London with a jet lag from here to Tokyo.”

I asked her how it was to pick up with Whim W’Him where she left off.

“It was great to be back in the studio with the ever so generous Whimmers.
We could get deeper into the material and also be more specific about it. We set the steps on the music, added and deleted steps. Unfortunately because of an injury of Chalnessa [Eames], we did spend a lot of time teaching Mara Vincent the part of Chal. Luckily Chal is already feeling better, but then the rehearsals were already finished. Melody [Herrera] had to leave on Wednesday, and Vincent [Lopez]  had to rehearse with Spectrum every day, so our rehearsals started at 9am, so that Vincent could leave at 11;15. Lots of uninteresting details. but this pictures a little bit the past week with Whim W’Him. Nevertheless we did get a lot of work done and the focus and input of the dancers was once again on level 100.”

“Have you decided on a title yet?” I wondered.

“I still feel the piece isn’t completed yet. And the title hasn’t come to my mind either. I never had such a hard time finding a title. I guess words sometimes diminish and/or box in the intensity and emotion that I would like the piece to convey.”

But later in the week she wrote to say that a title finally is chosen:

When I inquired about the present state of the new music, Annabelle answered that the music was also not entirely completed, though the form and length of the piece were set. A few days later, she traveled to Belgium to finalize the music with the composer, David van Bouwel. She and he had been working a lot through the internet.

“But once again, sometimes I don’t seem to find the right words to explain the dance. That’s why the dance exists. Because words fail to express everything.”

I’ve been thinking about that a lot, as I usually do when attempting to write about dance. Of course there is a very deep and basic sense in which words cannot do what dance does. That is why we have dance, and why it moves us so. Yet speech, including speech by those who are making the dance, can sometimes add to it or give a different notion, allowing us to experience and/or understand it on more levels. That, at least, is my hope.
After Annabelle’s working visit with David, she was quite ecstatic about the results.
“I’m in love with the music. It’s awesome, super, fabulous, fantastic. But most of all: it’s exactly what I wanted!” she told Olivier and wrote me:

“The day and night with my composer in Belgium went really well. We worked from 6 pm until 5:30 am. And then again from 11 am to 4 pm. I basically slept on a couch in the sound studio. The music has a beautiful build up, culminating into strong arpeggios with Johann Sebastian Bach’s Suite No. 2 as a red thread throughout the composition.It was too beautiful to cut it, so when I come back to Seattle I will have to create an extra 30 seconds in the boys’ section.
I’m totally in love with the music and I constantly listen to it on my I-pod. I believe it’s gonna inspire the dancers a lot! Voilà, this for the story of the music.”

My last question to Annabelle was about how her conception of the piece has changed since she last rehearsed it.

“The concept of the piece is still the same: the piece is about life’s continuous current with death that shall cease it for each one of us at a certain point. There’ s nothing dramatic about it, just that the more we are attached to the deceased, the more intense the pain is. Ultimately we have to let go and move on forward into the continuous life current. And that’s the beauty of life!”

Annabelle will return for the third round of rehearsals in the weeks before the January Whim W’Him show.
We can hardly wait! 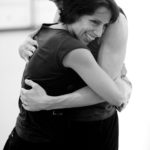 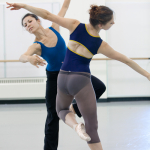 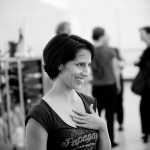 Pictures are by La Vie Photography laviephoto.com
except the candle photo, “Flame,” by Madelaine Cappuccio https://shadowsandhighlights.wordpress.com/tag/candle/

Next up: Olivier on Monsters, and the dancers’ take on his new works…