Growing up in Toronto, Ontario, Ethan Colangelo says his first exposure to stage dance was “a performance of The Nutcracker or something.” When asked what attracted him to dance, he replies, “I think it was music initially, and then connecting it to the body and the way you can physicalize sounds—like with music videos, hearing new sounds by the way people were using their bodies, and I found that really interesting.” 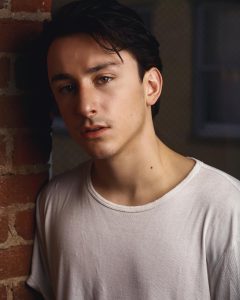 So he started taking hip hop classes, “And then I happened to have a hip hop class that was missed and there was a ballet class as a substitute. So I took it and fell in love with that even more, and I started doing just ballet work.” He attended Canada’s National Ballet School, but finding “that contemporary was something I was much more interested in,” he took contemporary classes at Elite Danceworx, also in Toronto, and eventually went on to The Julliard School where he was awarded the Hector Zaraspe Prize for Choreographic Promise. Since graduation “two and a bit years ago,” Ethan has participated in many choreographic workshops and created works in Canada, the US, Denmark and Germany.

When I ask whether he considers himself more a dancer or a choreographer now, he laughs and says, “I’m still a dancer, but truthfully most of the work I do now is creating my own works.” He smiles and adds, “Even now, though, I still question if I want to do this forever, ’cause it’s a hard life… And I’m also interested in many aspects of art. I love film as well so I’d like to go to school for directing someday.” One way or other, though, wherever life takes him, “Dance will always be an important part of it and I don’t see myself ever being out of this world.” 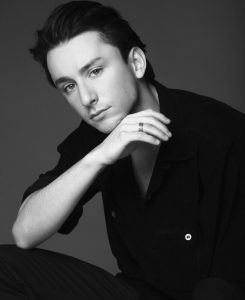 The work Ethan is premiering this January with Whim W’Him has been rather a long time in coming. In 2020, he was supposed to make a piece for [the Choreographic] Shindig, “but then in March everything went down” because of Covid. Then he was slated to work on the current piece in November, but he got “a really serious back injury, and it all had to be rescheduled.” The third attempt, though, has worked like a charm. “I’m here now,” he says, “and I love the dancers and the company and Olivier is very supportive—it’s been nothing but good positive energy for sure.”

Ethan’s piece is titled a vanishing thread. He notes that it “definitely has underlying themes, because we worked through a lot of improvisation and a lot of task building to create the phrase work, but it isn’t a linear narrative by any means. So it’s more like movement concepts based on real life experiences. Like gestures and postures that connect to some of the ideas that I wanted to work with. One of the things we were thinking about was the absence or presence of hope and also the idea of lost versus found and how those juxtapositions can be physicalized.” 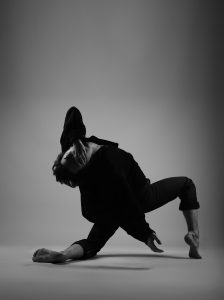 A lot of the inspiration, “the soul or the essence of the piece,” also came from a 5-minute piece of music by Hania Rani, a Polish composer, and Ethan’s friend Ben Waters, who “built the world around that piece.” A vanishing thread is 15 minutes long and in three parts, the opening and closing sections composed by Ben.

Ethan describes his piece as “very physical that for sure. In the work that I usually make I really enjoy using momentum and gravity to kind of perpetuate a lot of the phrases that I want to work with, and then having juxtapositions of almost anti-gravity, floating through space. A lot of it in sixes. I’m getting quite sick of sixes, to be honest.” He grins and continues, “I don’t usually work with counts. It’s a fun experience to have something a little more defined musically. But it’s very fast and super-physical for the dancers, and they’ve done such a beautiful job of absorbing the material and learning everything so quickly.” 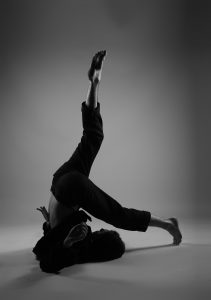 Note: Because of the disrupted schedule, Whim W’Him photographer Stefano Altamura was unable to attend Ethan’s rehearsals, hence the lack of Whim dancer images here. A post next week will include dress rehearsal photos of a vanishing thread.