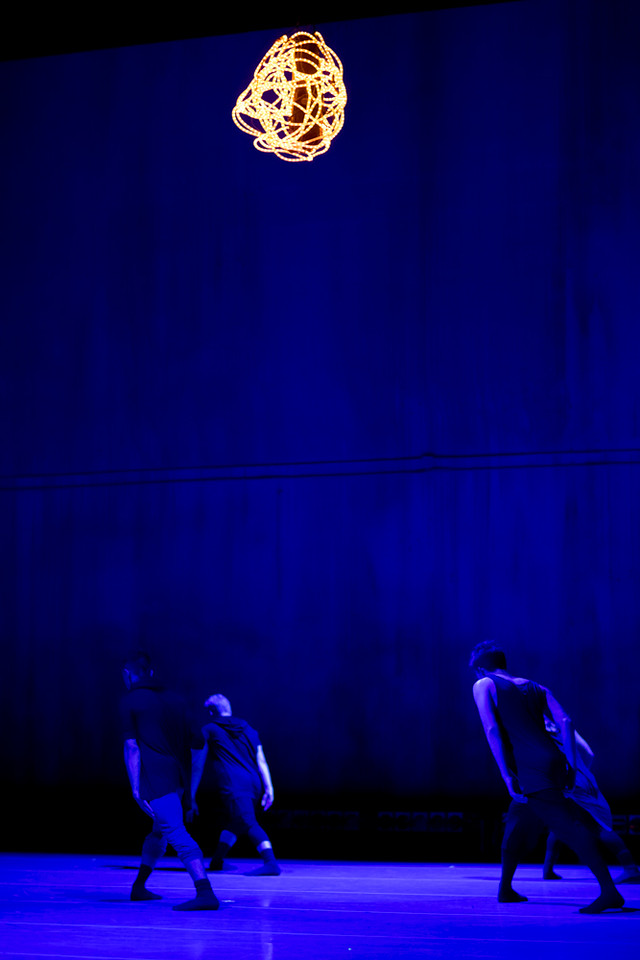 “That’s the black heart!” I heard more than one audience member pronounce at intermission of Whim W’Him‘s X-POSED last weekend. They referred to a tangled mass of light that had—significantly or pointlessly, portentously or ironically or whatever, according to your point of view—swung back and forth across the stage at the start of Kate Wallich‘s new piece by that name. When asked if swinging-light as black-heart was what she intended, Kate said with her enigmatic smile, “I never thought of that,” and seemed quite pleased for her creation to elicit a multiplicity of meaning.

In the reactions to all 3 X-POSED pieces, there was plenty of room for different opinions. My next three posts, each with photographs and critical reaction to one of the program’s new works, will amply illustrate the variety of responses that a work of dance can elicit.

Though it came second on the program, Kate’s piece begins this series simply because the photographs are the first to be ready and approved (the other two choreographers being currently en route to other far-flung gigs). Black Heart elicited many responses. 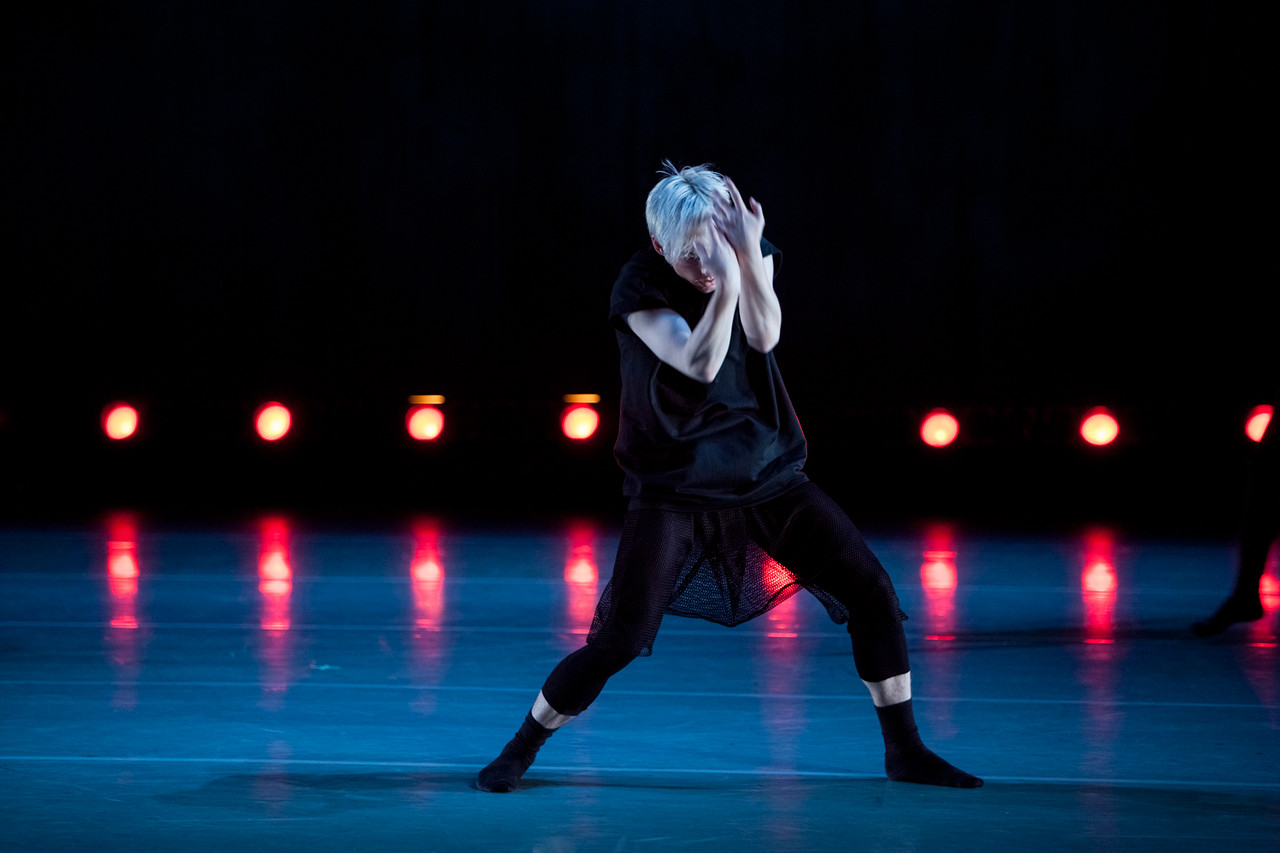 Wrote Ciara McCormack for Seattle Dances: “After the first intermission, Kate Wallich’s piece, (Black Heart), took the stage, which was stripped down to the bare bones. Red light and a screeching buzz filled the theater as dancers sauntered on. A chandelier of coiled light ropes swung across the stage, setting the dancers in motion. Loud, discordant electronic organ music accompanied smooth, lazy movements punctuated by sharp, smacking strikes. Soloists wove through dancers who walked across the stage like video-game obstacles, cued into one course and one movement pattern without acknowledging anything around them… 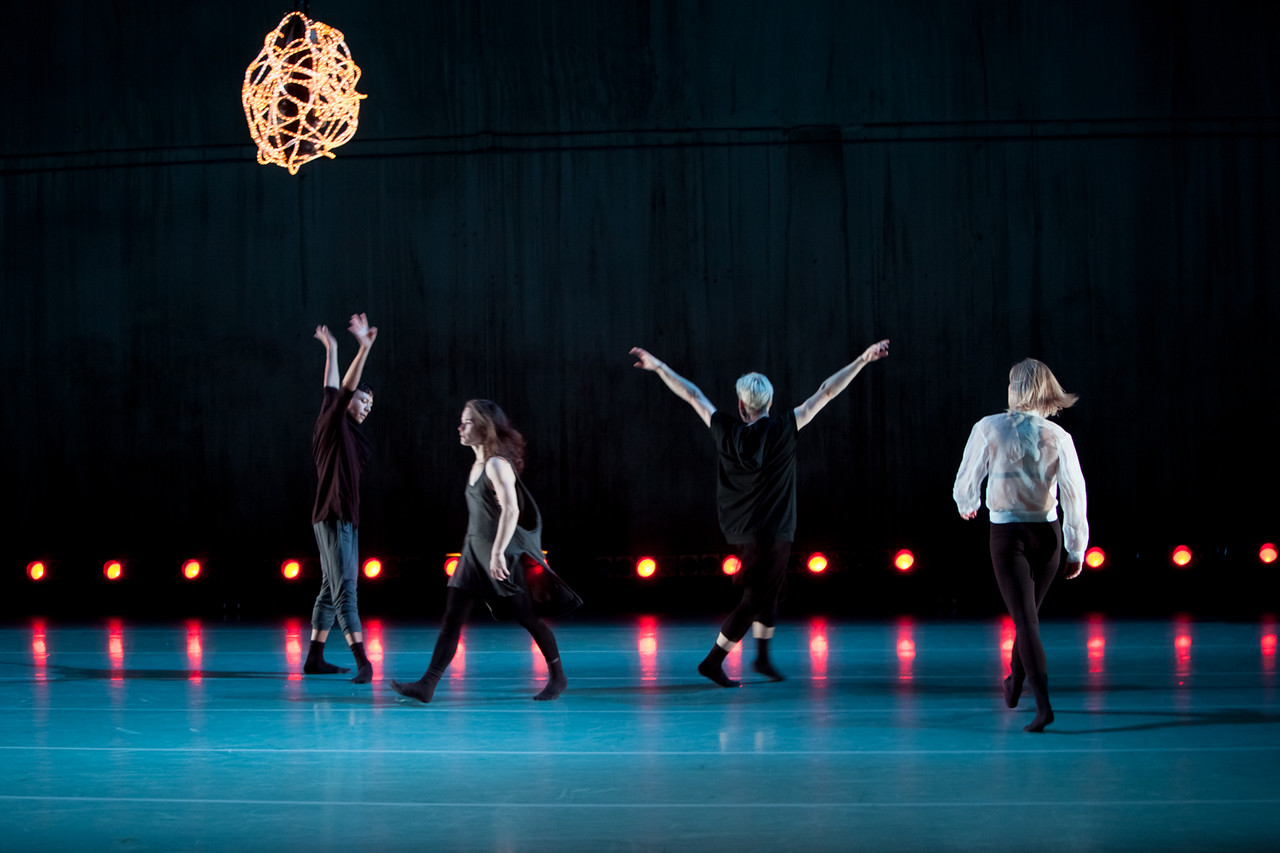 “Black Heart captured the dark side of creating and rehearsing dance; self-doubt, jealousy, rejection, pain, and disappointment all came to play. The layers of the piece were carefully juxtaposed, little stories and relationships emerging on the sidelines while the dancers on the floor stuck to their emotionless routines. Again, the dancers proved their versatility by fully embodying Wallich’s posturing—a combination of aggression and apathy, with tension held in their shoulders and core while their faces assumed a distant, indifferent frown.” 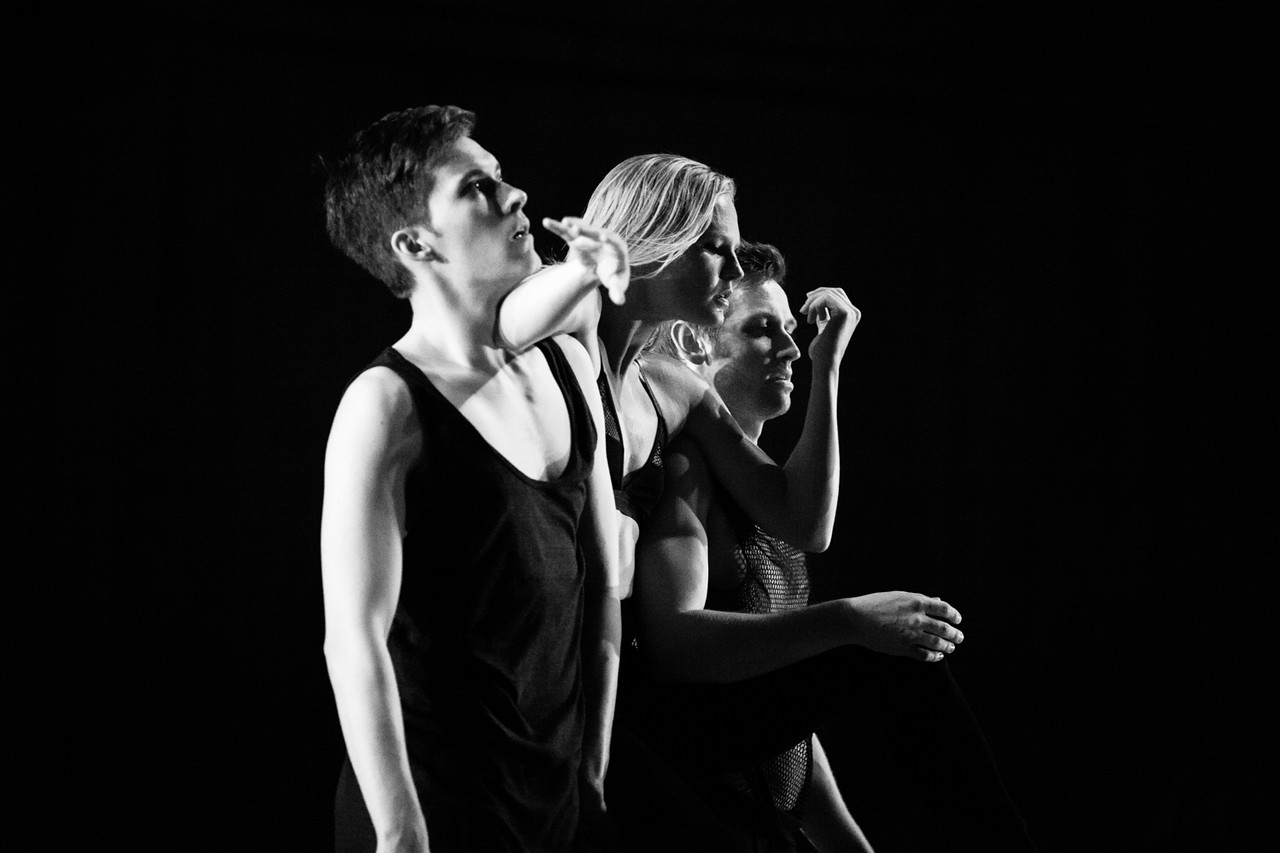 In “A Darker Side of Whim W’HIm,” a review for City Arts, Rachel Gallaher reported: Kate Wallich’s Black Heart was the most experimental piece of the night, and despite my admiration for Wallich’s work I found myself on the fence about it. The music was incredibly jarring—Aaron Otheim’s score of crashing piano sounds was an assault on the ears, which in a twisted way forced extra attention on the dancers in attempt to take focus off the noise. The dramatic opening set the tone for the rest of the piece: a row of searingly bright lights cut through the darkness of the stage, and a large chandelier-like lighting fixture swooped pendulum-like from one side of the stage to the other. The program described the piece as a “cacophony of choreography,” and it lived up to that name. A mix of contemporary and pedestrian movement with some subtle ballet thrown in as well, Black Heart is full of small vignettes—dancers walk around, turn their backs to the audience in order to watch the show, they sit on the ground—there are always multiple things happening on the stage at one time, indulging the roving eye. The sharp movements captured the chaotic, fast-paced, short-attentioned, neurotic energy of the millennial generation. We may be jarring and slightly annoying, but that’s us and we’ll express ourselves however we want to.” 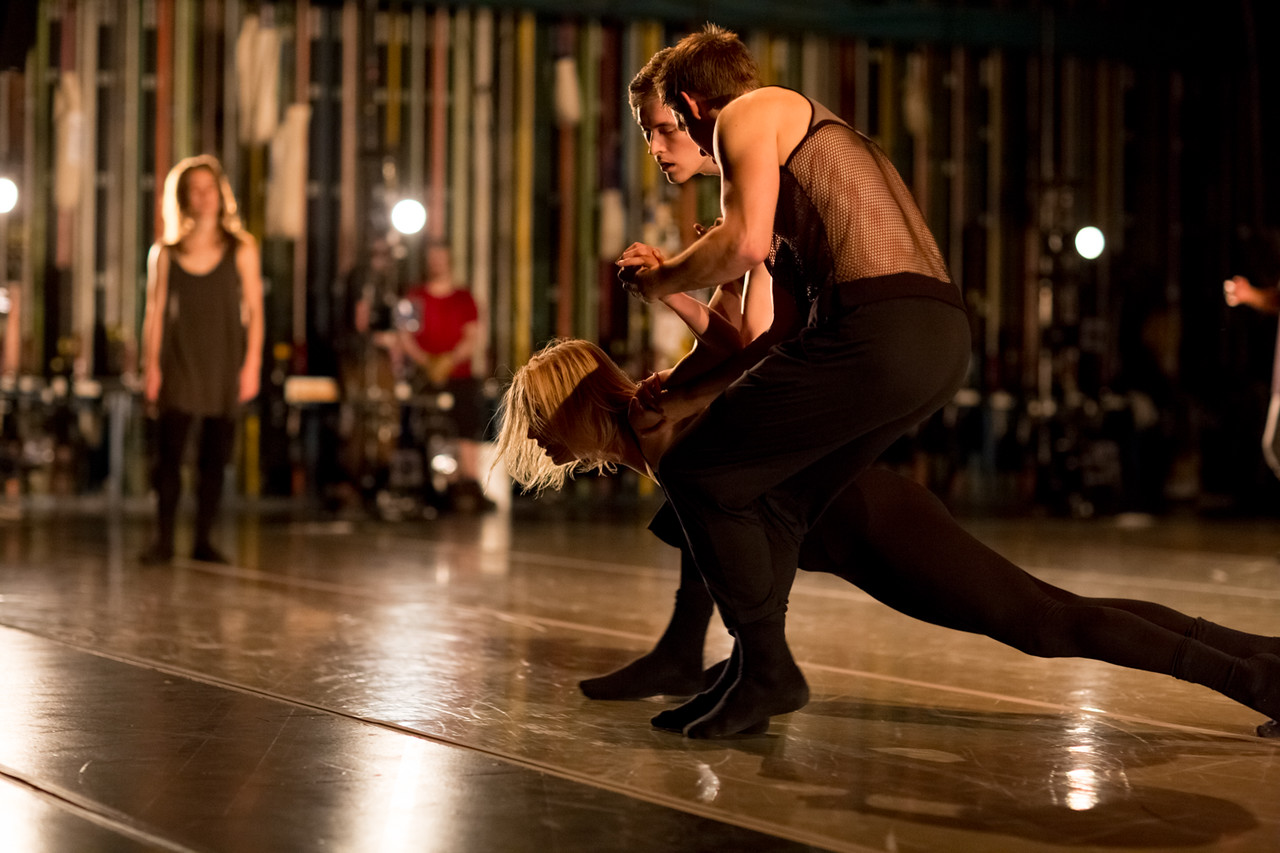 Melody Datz Hansen wrote on The Stranger‘s ‘Slog’ about the soundscape: “Local choreographer Kate Wallich’s new piece, Black Heart, (represented in the program as a black heart emoticon) uses methodical and sharp movements to balance out the chaotic music from composer Aaron Otheim.”

In the PI‘s blog, on the other hand, Alice Kaderlan was put off by “Aaron Otheim’s crashing score… an assault on the senses, well suited perhaps to Wallich’s description of the work as a ‘cacophony of choreography, but

[it] doesn’t make watching this seemingly endless work any easier.
”

By contrast, Michele Solano writing on the Thus Spoke Lady M blog, was enchanted: “This piece, oh this piece, moved me in ways I was not ready for and brought out emotions I was not prepared to show and it was glorious! Ms. Wallich’s movement in this piece was dark, tumultuous and at times, heart wrenching! Described in the program as ‘a cacophony of choreography in four parts’ is a brilliant description.” 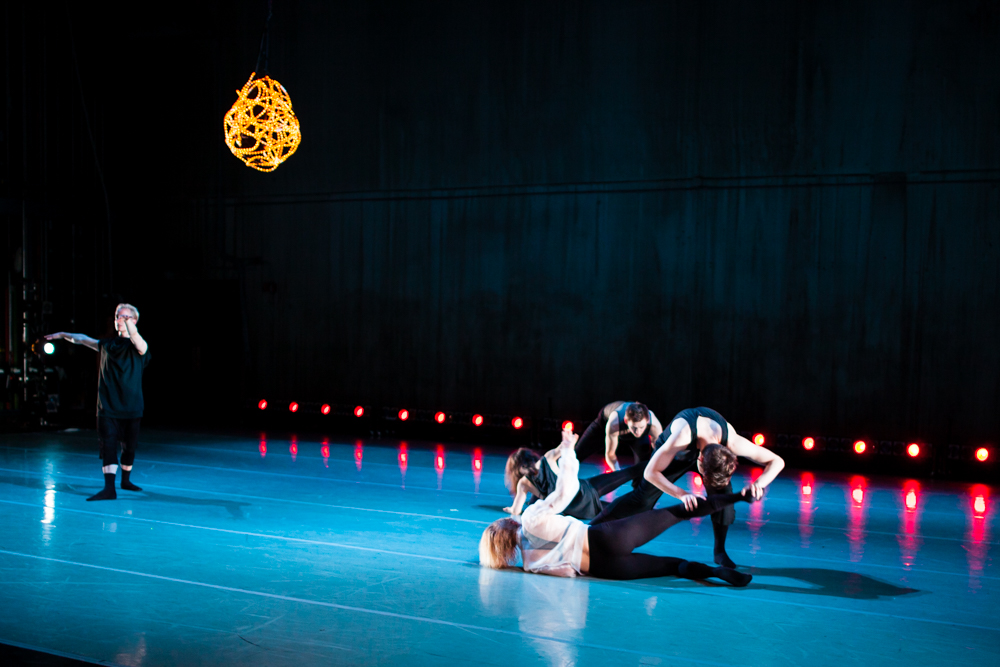 A less absolute (in either direction), perhaps more nuanced view was put forward by The Seattle Times‘s Michael Upchurch: “Seattle’s Kate Wallich, whose early works created tight, organic networks out of her dancers, seems in her latest piece, “Black Heart,” to have atomized her prior choreographic tactics. At times in “Heart,” it’s as if three or four entirely different works are happening at once. Though full of eccentric detail, “Heart” sidesteps obvious dramatic effects. Yet a number of its passages and components are peculiarly hypnotic. The simple lifting of fists and spreading out of fingers by all seven dancers in unison—to give one example—has the power of a cryptic ritual.” 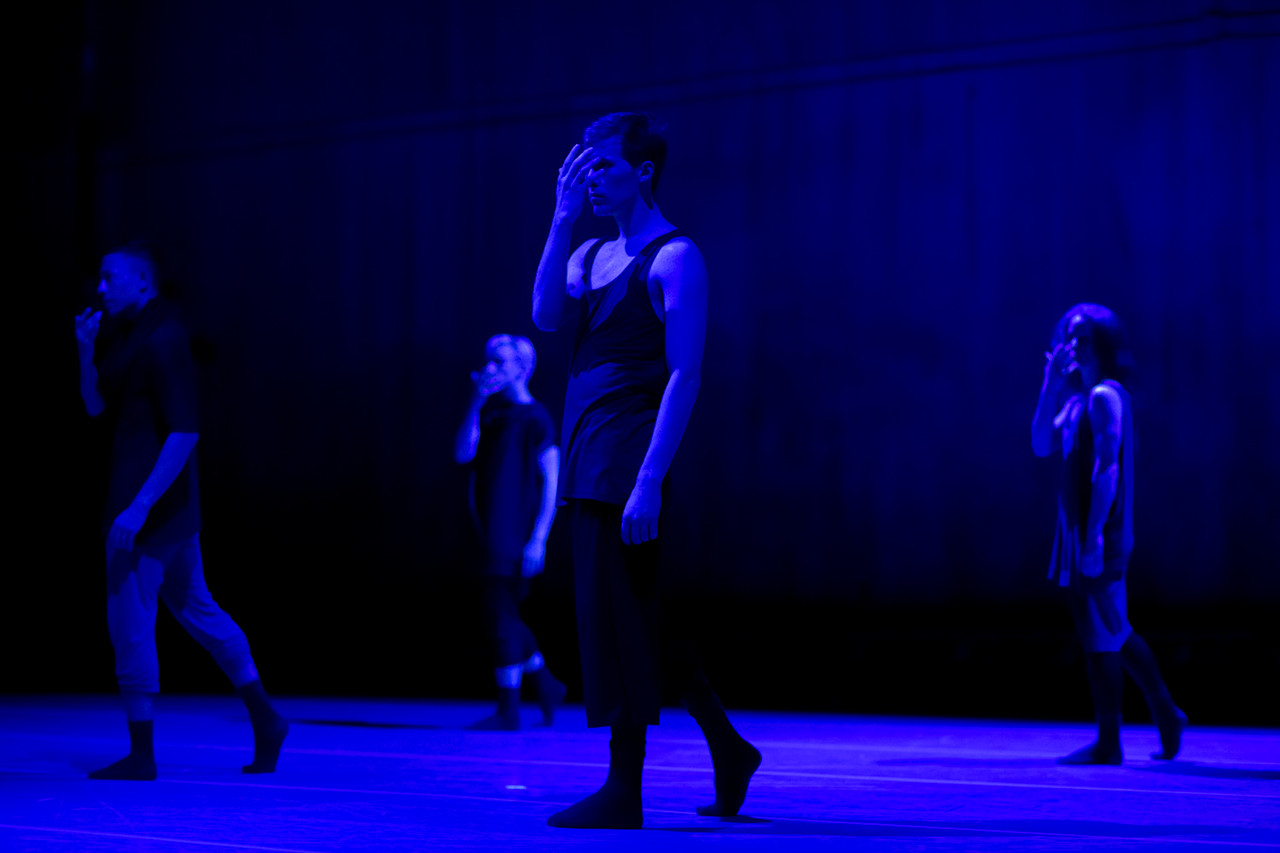 Kate herself talked about what was happening in her piece to Imana Gunawan
of the University of Washington Daily: “’There’s sort of these underlying strings of narratives that happen,’ Wallich said. ‘Spatially it’s about relationships, different relationships in a design sensibility like “Oh there’s a circle or a line,” but not necessarily giving context to that circle versus giving context to that line, for example. …There’s relationships that’s evolving.’ 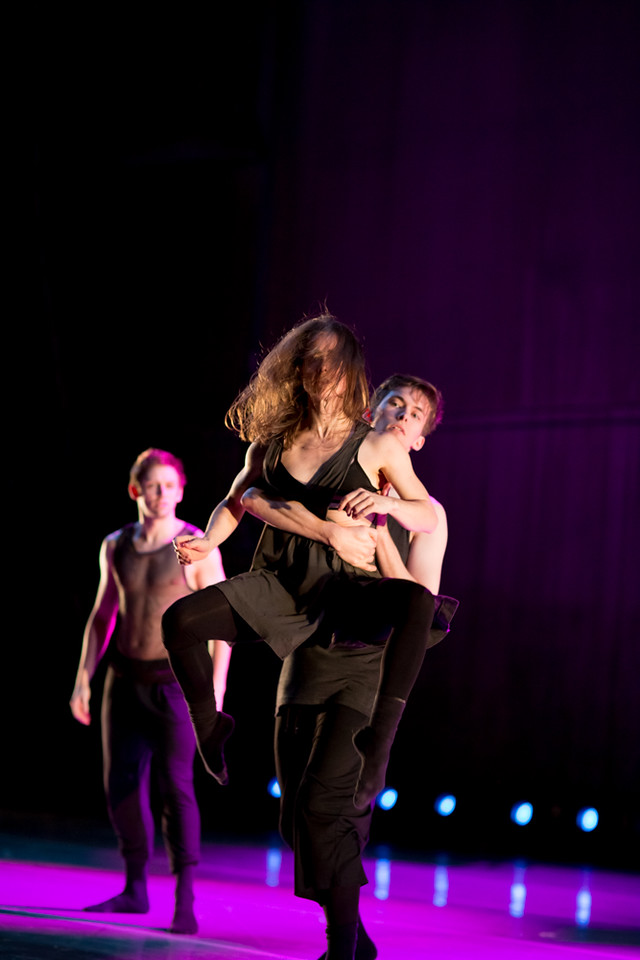 “In the work, although a dancer’s location in space in relation to another dancer may suggest a relationship, sometimes they may not physically touch or acknowledge each other. Other times, they can be intensely intertwined. Wallich’s distinct movement vocabulary [is] on full display in her work. The dancers display striking movement architectures and smooth athletic qualities as though charged by an electrifying force, yet simultaneously controlling and embodying that force.”

Every now and then, Imana continued, classical ballet movements like turns on one leg will emerge. ‘Whim W’Him is more of a contemporary ballet company,’ Wallich said. ‘Knowing that, it’s opening this sort of realm of space for me to be like, ‘OK let’s recall on ballet, let’s recall on other formats that I may not necessarily have access to with my own dancers [in my company] because … they have different physical capabilities.’” 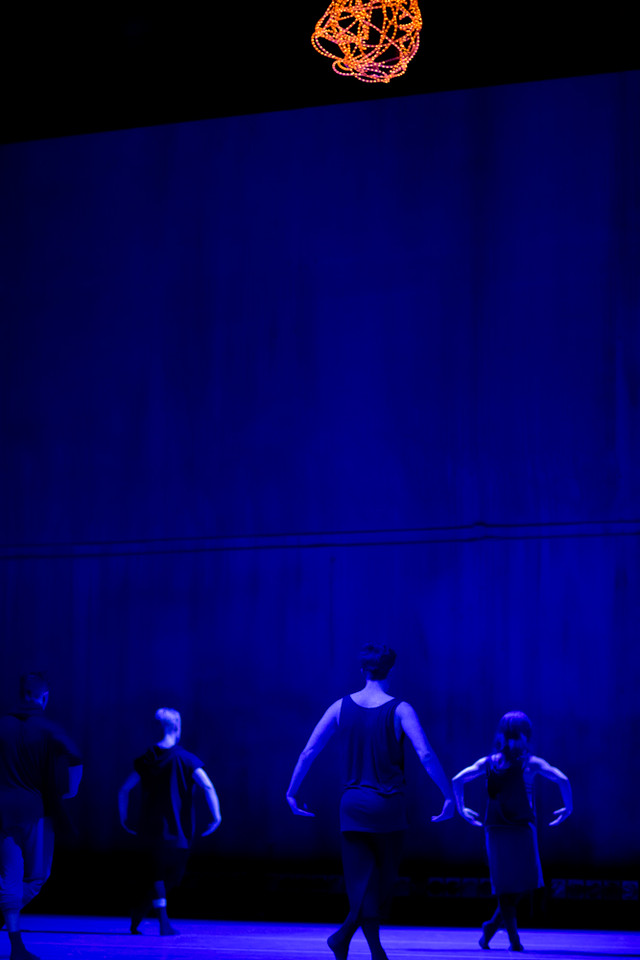 Black Heart is characterized by a mesmeric quality, even in the quicker sections. Two dancers dart unnoticed on diagonals across the paths of two others, who move parallel to each other without eye contact or touching. Throughout, hands cover eyes and hair falls in front of faces. 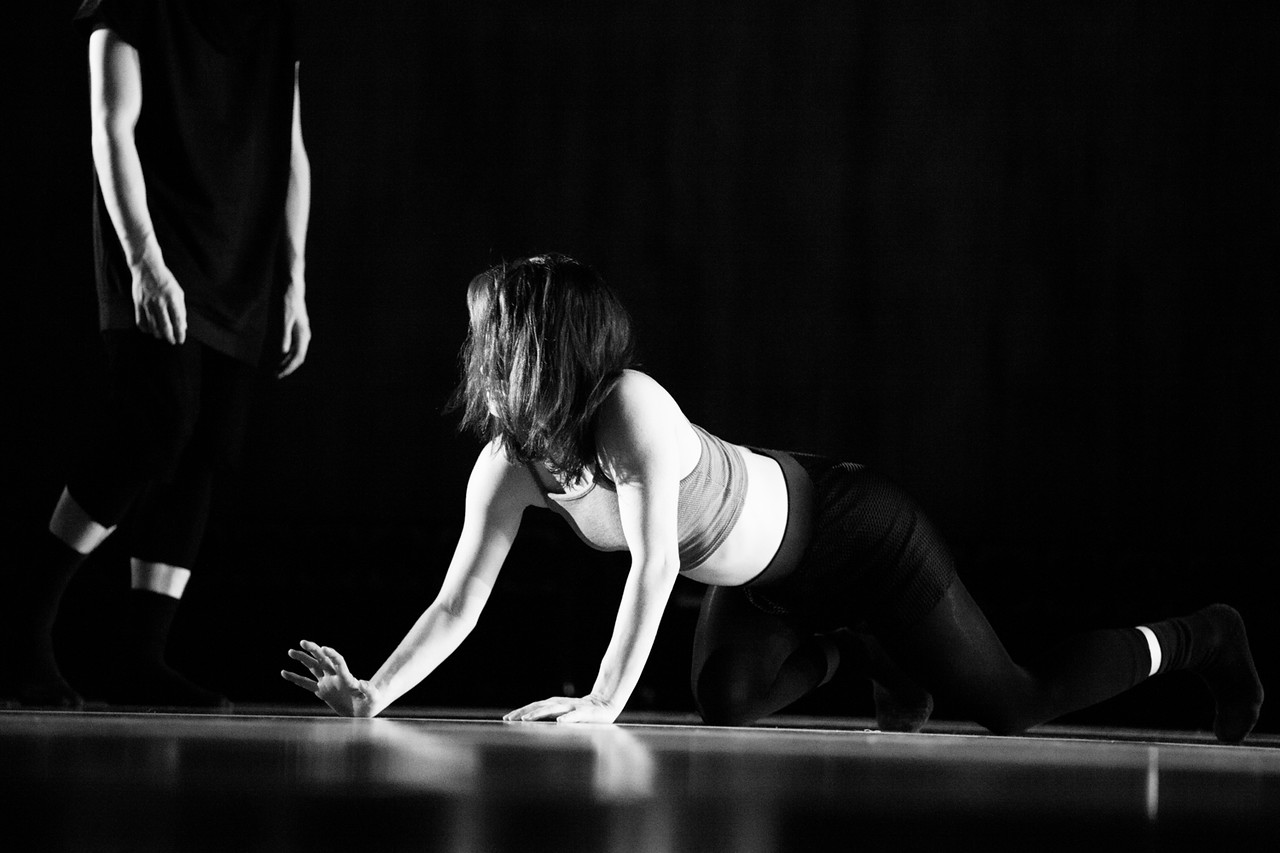 A hypnotic port de bras of all seven dancers in detached unison might seem to counterbalance a convoluted trio of entangled arms, legs and bodies, but even in such intimate physical contiguity the separate figures seem somehow not to connect.

And then—out of Jim Kent‘s sidling approach toward Lara Seefeldt, and her cautious advance to him—a singular poignant moment arises. In a personal and very particular-seeming passage, their hands reach out (a bit like Michelangeo’s God and Adam on the ceiling of the Sistine Chapel) and their glances finally meet, ending the piece.

If you saw X-POSED and would like to comment, Whim W’Him welcomes your reactions; to fill out the audience survey or just join the conversation, go to: https://svy.mk/1IhBsuJ