X-POSED – Alone is the Devil onstage

“Closing out the program was the stunning and theatrical Alone is the Devil, choreographed by Wevers. Chillingly layered with darkness, anxiety, self-doubt and struggle, this premiere tapped into the nightmare world of addiction and temptation, both traditionally and metaphorically,” wrote Rachel Gallaher of City Arts.

In Whim W’Him artistic director Olivier Wevers‘s Alone, the traditional theme of Seven Deadly Sins is his lens for a decidedly untraditional exploration of the insidious or openly destructive ways in which Vanity, Lust, Sloth, Greed, Anger, Gluttony, and Envy can assault an individual soul. Wrote Ciara McCormack for Seattle Dances, dancer Jim Kent portrays “a man whose internal world is populated with demons that lead him through the temptations of those seven sins we all live with and attempt to control. The demons writhed, slithered, and struck out, menacing figures that, along with the constantly shifting shadows onstage, carried Kent through these different regions of his mind, watching him succumb [to] or resist each temptation.”

McCormack went on to say that while Olivier “didn’t necessarily bring any new revelations to the discussion of the seven sins, he did employ creative means of depicting it,” and concluded that “Whim W’Him does deliver intellectual depth.”
For Melody Datz Hansen of The Stranger, “Wevers’ piece avoids that corny trap that many themed works fall into by letting the emotion of the dancers’ movements tell the story instead of overly illustrative or mimed choreography.” Further, “Wevers’s work combines a polished ballet aesthetic with—in this case—stark and haunting themes that utilize the unbounded limits of contemporary dance to make really interesting stuff.”

“Propulsive enough to feel like strong narrative, yet abstract enough to be open to interpretation, ‘Alone’ pits dancer Jim Kent, in his skivvies, against a sextet of masked manipulators who seem determined to make him their plaything.” So Michael Upchurch reported in The Seattle Times. Or, in the words of Critical Dance‘s Dean Speer, “a lone male … was assaulted and assimilated by head-stocking wearing and bug-eyed goons, reminiscent of the Borg of Star Trek infamy. The dancers used a door in a frame that reflected and which could be broken up – to good stage effect. Creepy, yet a strong artistic statement.”

The adjective “creepy” was deployed in more than one review. Alice Kaderlin, on her ‘FeetFirst’ blog for Seattle PI, wrote “One of founding director Olivier Wevers’ greatest skills is in setting a mood or atmosphere and in ‘Alone is the Devil’ he creates a world that is creepy from start to finish.” 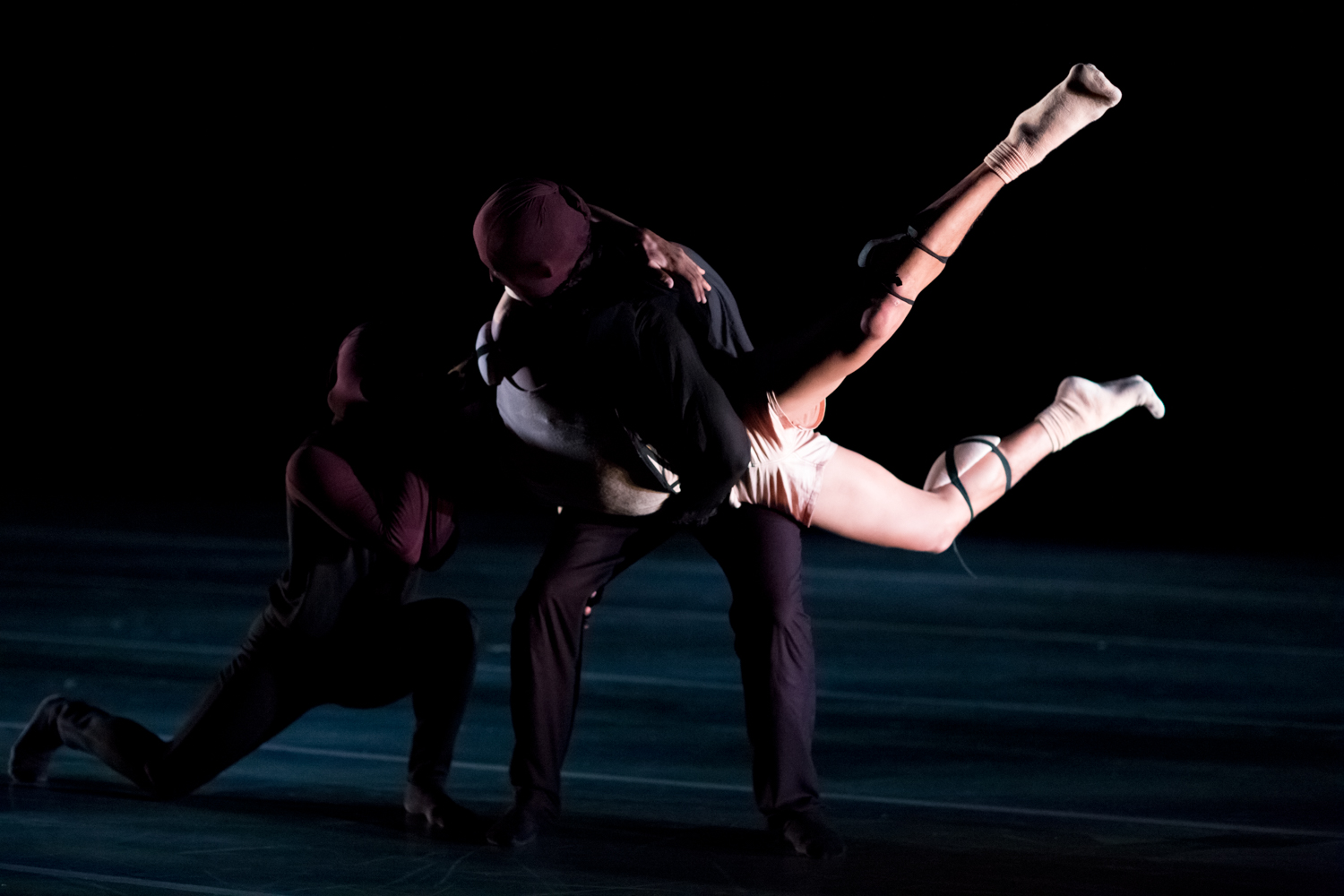 She goes on to say: “Christopher Rouse’s propulsive score, which sounds at times like the music from a B-grade horror movie, and Michael Mazzolo’s brilliant lighting design add to the feeling of unease. Wevers is a master at using props, and a mirror, which cracks and then is put back together, serves as a powerful visual metaphor for the fractured world that Kent inhabits.”

Olivier’s feeling for theatricality that is both clever and moving was also pointed out by Michele Solano in her ‘Thus Spake Lady M.’ In the vanity sequence, “through the use of a mirror on wheels that the phantoms expertly moved through the space… Mr. Wevers choreography gave Mr. Kent a perfect vehicle for getting sucked into his own image and then feeling the shattering impact when the phantoms destroyed the mirror.”

Envy, gluttony, and greed morph into one of Olivier’s recurrent themes: the multitudinous ways modern humans are continually drawn to excesses of consumption. Grasping at the nameless contents of brown paper bags, bound by his tormentors with straps, and bloated with nutritionless food, Jim/Everyman becomes the repeated victim of his own desires.

There was considerable praise for the dancers’ skill and versatility. Seattle Dances‘s Ciara McCormack commented, “It is the caliber of the dancers that makes the company a treasure of Seattle dance,” while for Rachel Gallaher of City Arts, the show demonstrated “the company’s ability to shift and grow as dancers, moving between various vocabularies of movement while maintaining their high skill level and ability to hook the audience.”

In rehearsal, Olivier continually emphasized that each of the demon/dancers besetting the Jim-figure needed to conjure a very particular personal monster/creature. Though scarcely to be recognizable individually, neither were they meant to seem all alike. As Olivier told Imana Gunawan of the UW Daily, “They represent the same person, but a different aspect of their personalities. I call them the creatures that [are] in him.”

And although he is continually surrounded and accosted by aspects of the world and his own psyche, he is bleakly and irreparably alone.

For Alice Kaderin, “The only failing of ‘Alone’ is its abrupt ending; one has the sense that it should go on for just a few minutes longer to signify a more complete finale.” But Rachel Gallaher had a different take on the final moment of the piece, writing, “The dancers’ hissing whispers at the end are a menacing reminder that even if you can’t clearly see your demons, they are always there.”