words & dance— Hedda at Intiman; does it work?

Although I first read Hedda Gabler long ago on a play-reading binge in high school and have done so several times since, last week, at Intiman Theatre’s Summer Festival, was the first time I’ve ever seen it staged. It is surely one of life’s most basic truisms: no verbal description can properly evoke reality. Even pictures, purported to be worth a 1000 words, don’t hold much of a candle to the actual thing. A play is a kind of reality.
Yet I can’t resist trying to put in words the gap between the notions I had about Ibsen’s characters before seeing the play and my experience watching it unfold onstage.

(In order of appearance)
•Aunt Juliana Tesman (Shellie Shulkin)—in this production, is not the expected silly, if kind, woman I imagined, but a sort of provincial Auntie Mame, an amusing surprise.
•George Tesman (Ryan Fields)—is neither totally clueless nor tragically aware of the gulf between him and his wife; he seems diffuse rather than nuanced in this characterization. 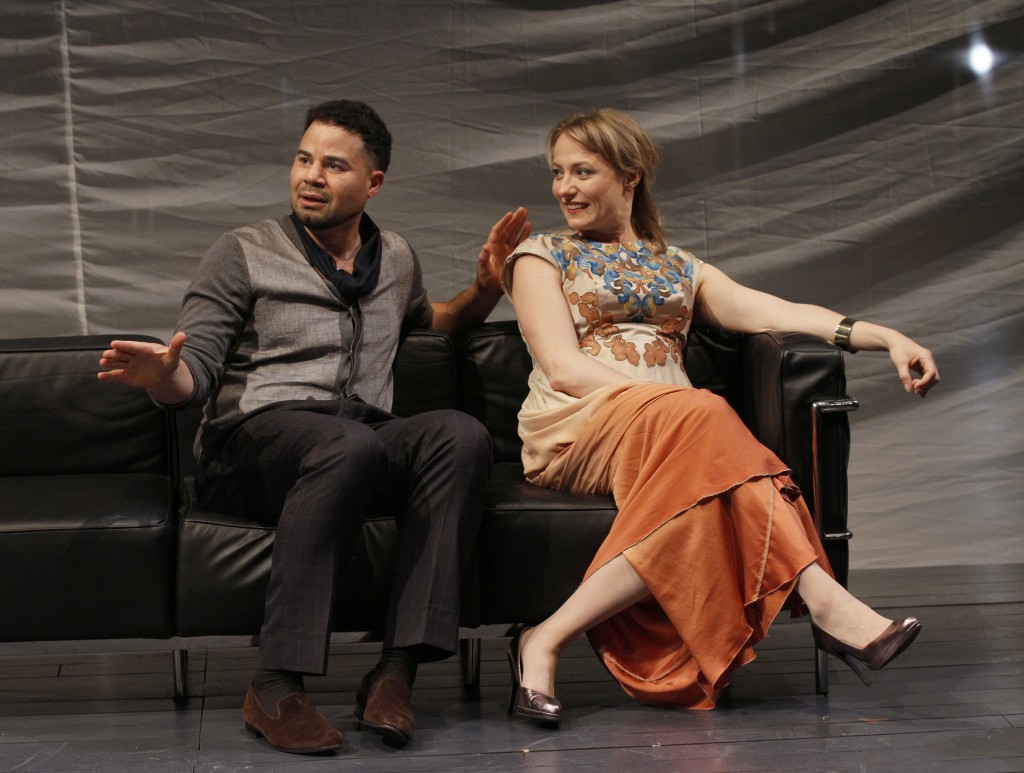 •Hedda Gabler Tesman (Marya Sea Kaminski)—projects such knowing disingenuousness, such a chill and off-hand pleasure in devastating others that I dislike her as if I were eavesdropping on an actual person.
•Thea Elvsted (Fawn Ledesma)—combines both real spunk and a kind of hapless timidity. Perhaps Ledesma overplays her forehead-mopping/throat-clutching gestures (not, by the way, choreographed by Whim W’Him artistic director Olivier Wevers, but, according to Intiman director Andrew Russell, part of the actors’ liberty to develop physical manifestations of personality); still, her Thea is a believable portrait of a bright but dependent and unassertive woman in a small late 19th century Norwegian town, trying to find uplift through taking on the project of a man.
•Judge Brack (Timothy McCuen Piggee)—is a formidable presence on the stage. Hedda’s relationship with him plays, I feel, as her only one with real meat to it: two ruthless and manipulative cynics try to out-maneuver each other. The judge, whom I’d imagined as pompous and self-righteous, comes across here rather as an unashamed snake-in-the-grass, a gripping and convincing interpretation. 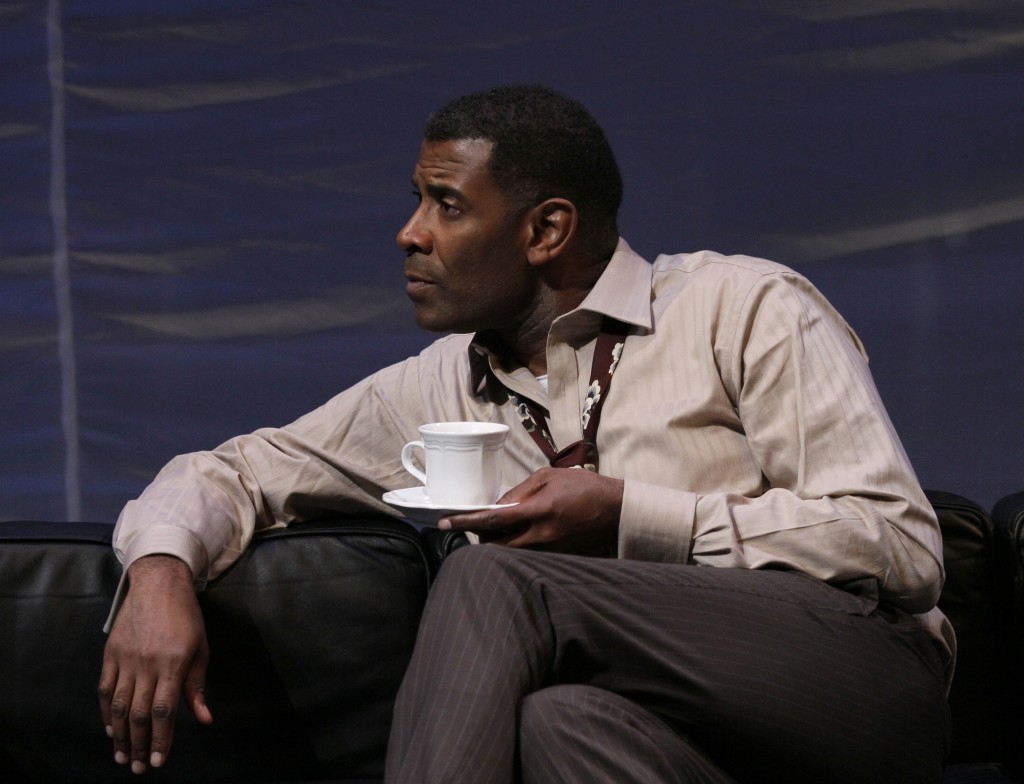 •Eilert Lövberg (Michael Place)—though a bit more dashing with his hair rumpled after his night of debauchery, for me Hedda’s former admirer does not exude the kind of dangerous brilliance which the plot of this play needs to fuel its engine. Hedda seems more captivated by the idea of him than his reality. Is the lack of sparks between them intentional, a manifestation of Hedda’s inability really to connect with anyone? 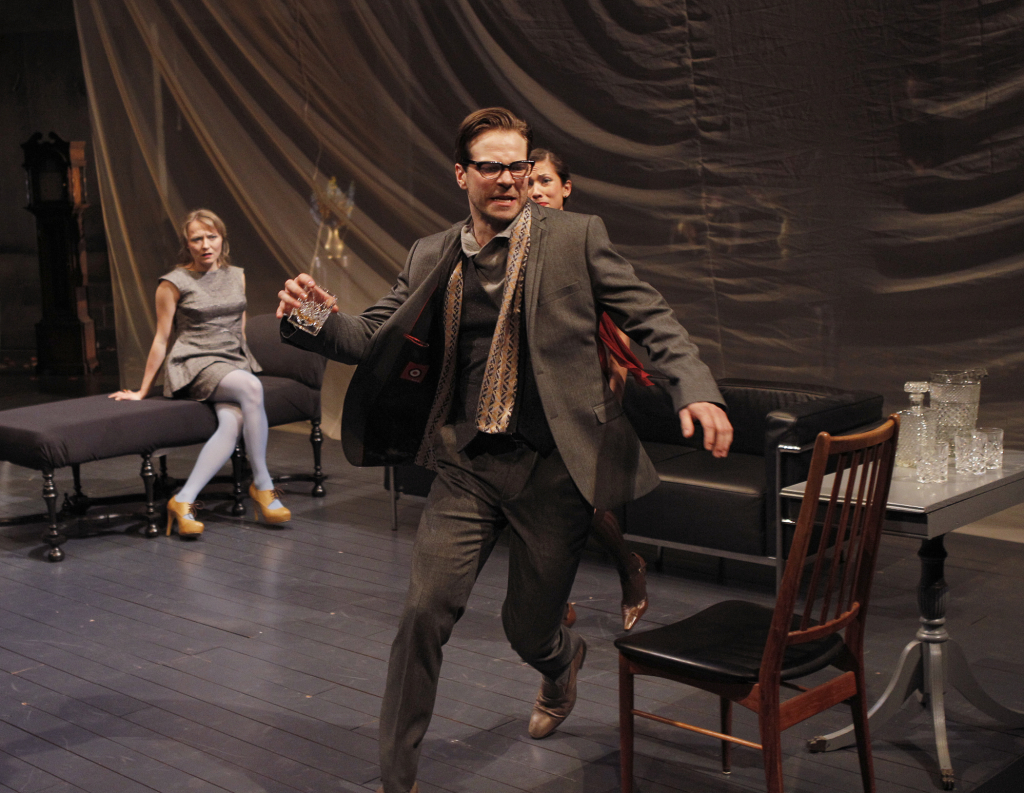 A couple of days after seeing the show, I asked director Andrew Russell about an aspect of the production which had bothered and confused me. I can readily understand and sympathize with the urge toward a less literal stage setting. The gauzy, yet still constricting walls are a fine metaphor for the gossamer but indestructible cobwebs that bound the characters of the play. Why, though—if Ibsen intended to depict the crushing of a woman by the limitations of late 19th century male-dominated bourgeois provincial society—use modern costumes? In this production, Hedda is dressed in clothing both very detailed (unlike the setting) and easy to move about in. A clear choice has been made to disregard another strong visual metaphor embedded in the play, the constricting nature of the garments in which she must continually live encased. Andrew gave the interesting explanation that he and the collective that produced this show, consciously stripped away not only walls, but all details of reference to then and now, and chose to emphasize the stalemate of Hedda’s life independent of era. 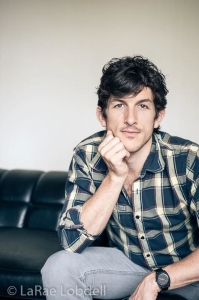 Rather Hedda is presented as pressured from all sides: limited by her own personality, hemmed in by her  need to act the woman of high society and to avoid scandal, bored at her lack of both wealth and any vocation, annoyed by the unintelligible demands of an unsuitable husband, and accosted by old lovers. This situation, Andrew seems to be saying, could occur anywhere. Thus, this production shows a Hedda more universal than the standard one, in the sense that her dilemma and fate are not tied to a certain time and place. It also makes her more specific, in that not Society, but the personality, individual circumstances, and private bad choices of Hedda herself are what bring her to a bad end. Since she isn’t depicted as historically trapped, Hedda comes across as hysterically ensnared by her own unstable character. Social drama becomes psychodrama. The play as interpreted here is less about the demands of society on Woman and more a tale of a particular sociopathic woman unraveled by her own insecurities and volatility of character. 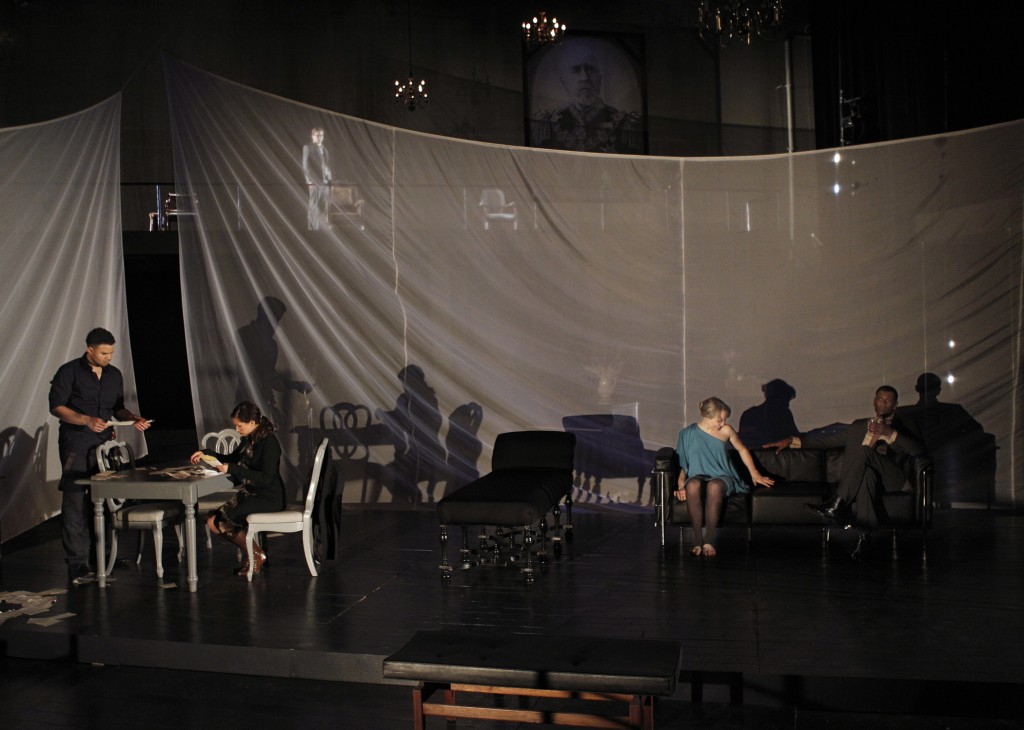 It is out of this context that the dance segment, choreographed by Olivier, evolves.
For the last moments of the play, while the others are no longer attending to her, in place of Hedda going off into the back room and shooting herself offstage, she unravels in movement before our eyes, as if words have finally failed her. Small gestures that she inconspicuously employs throughout the play, stretch out and take over. Marya’s Hedda, already impenetrable and ambiguous even to herself, gives up entirely on conventional speech and acts out her inner compulsions, bending, writhing, elongating, while the other actors continue to move in slow motion, oblivious to her. At the final instant, instead of firing a literal gunshot, Hedda leans forward with a book pointed like a pistol. Blackout. 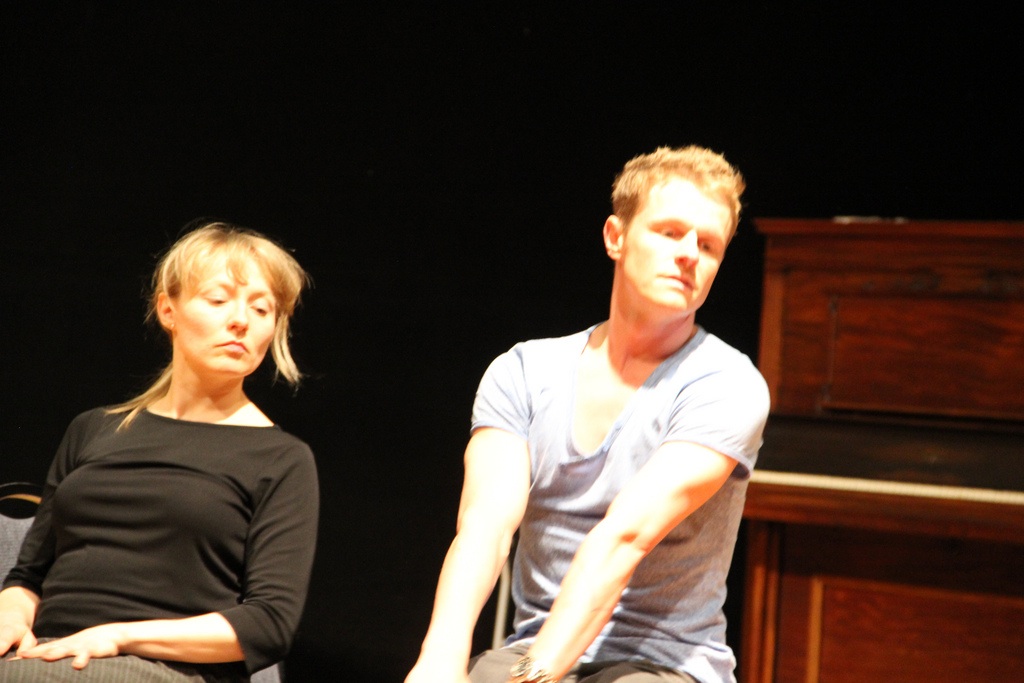 I spoke to a number of people about this ending. Several proffered versions of “It didn’t do anything for me.” Some thought it too different from the rest of the show. Others agreed it was jarring, but liked the drama of it. One person said simply, “It’s too abstract.”
When I asked Andrew about these reactions, he remarked wryly, “For a European audience, this would be an incredibly conservative production.”
I suspect that American play-goers like their classics to stay classical, or more accurately, to remain plays to the end and not change genres mid-stream. You can set a play in a different period or take other liberties with staging—Romeo and Juliet in a concrete jungle, for example—and although people might or might not care for the interpretation, they won’t call into question your right to do it. But you don’t want to abandon the text and break into a different art form. That seems to many to be going too far.

For me, however, perhaps because I’m already so convinced of the expressive possibilities of dance, this fracturing of the expected flows naturally out of the pared-down script. The verbal niceties of a parlor, like the curtain walls, seem in the course of this production to efface into such a thin layer that what is happening behind and beneath shows through. And the danced or physically portrayed build-up to the dénouement is like a giant rent opening in the social fabric. It shocks, and at the same time it seems right. After a suitable hiatus, the tear will mend itself, the other characters will resume their lives, and if she were not the subject of a riveting play, Hedda Gabler herself would be forgotten…