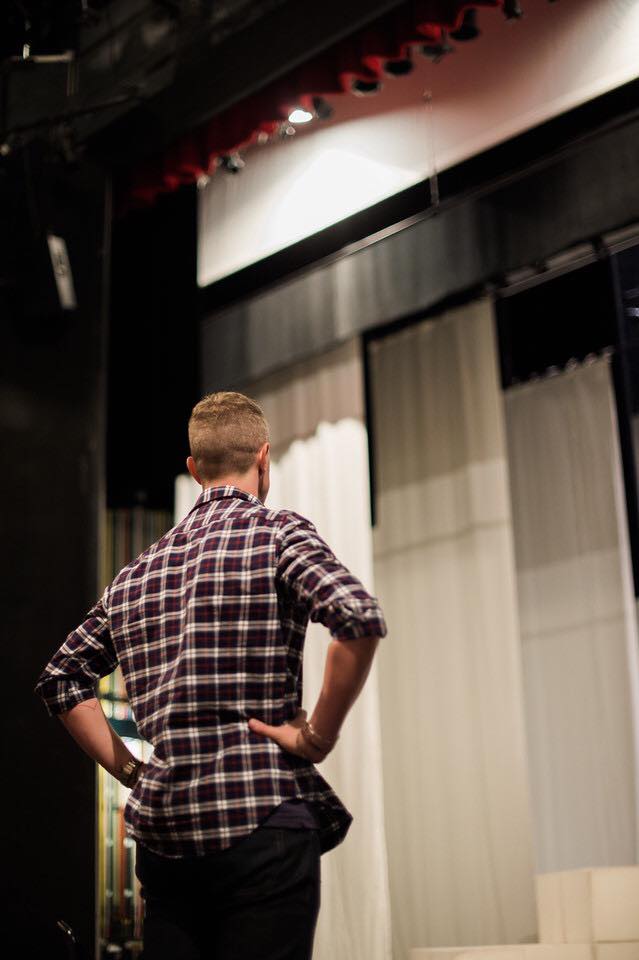 In recent years, Olivier Wevers, Whim W’Him’s artistic director and founder, has been known or a sort of counter-ballet, or at least for incorporating shapes and unballetic movements like the ‘sickle-pickle’ turned-in foot and highly flexible spines that figure so often in his work for the company. But his origins are in classical dance, and a seldom seen facet of his choreographic talents will be on display at this week’s performances by Grand Rapids Ballet Company of his Midsummer Night’s Dream.* Created in 2014 for the company of former Pacific Northwest Ballet prima ballerina Patricia Barker, Olivier’s Midsummer is an old fashioned story ballet, though not without some new twists. Midsummer is one of those famous and quintessential works that have already been done in ‘definitive’ forms by such choreographers as George Balanchine and Frederick Ashton. What is fascinating is that—while neither ignoring the plot nor distorting it all out of shape—there is till something very new and intriguing to say about and with this story, in Patricia Barker’s words, “the telling of an old story with new eyes.” 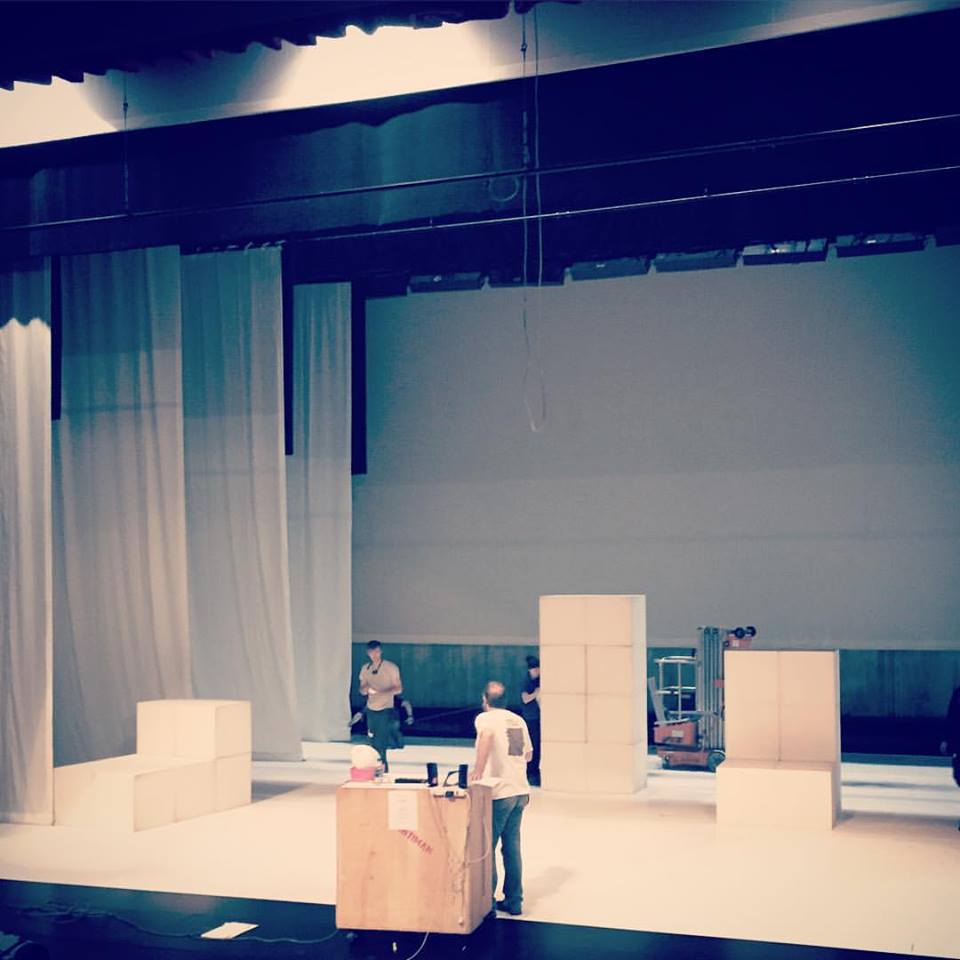 None of the bosky woods or lush greenery of the usual rendition here. The stage will be spare and white, with tall wings and backdrop in what, depending on lighting, comes across as various shades of white and cream and palest gray. Three groups of linked cubes, also white, pile up or separate to produce settings for the scenes of the ballet—     a child’s bedroom for the framing story, Titania’s bower, or the magic forest where lovers lose and find each other and the fairy queen has a love affair with a donkey. 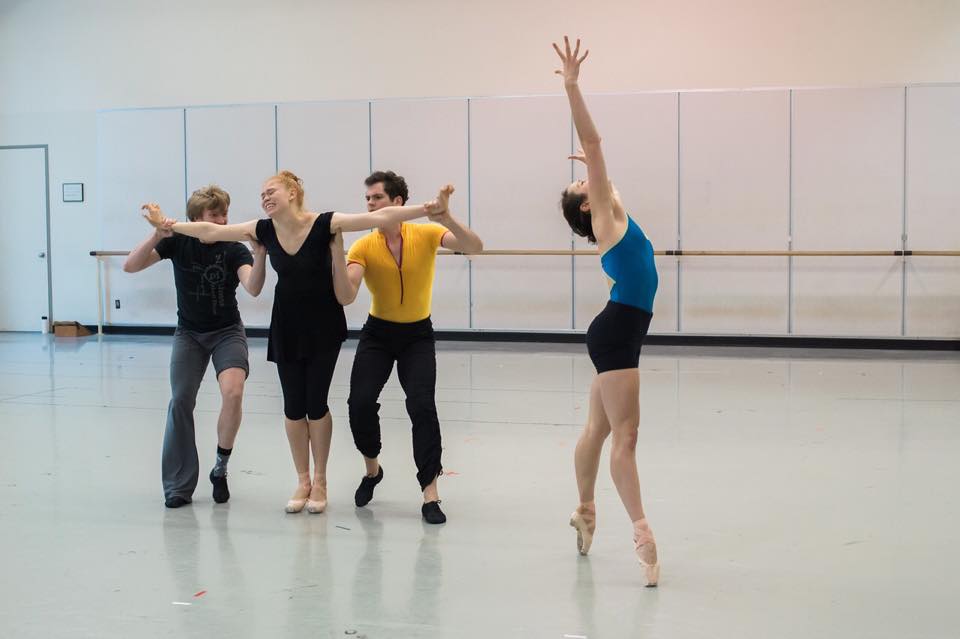 The fairies also will be white-clad, emphasizing their strange, immortal, otherness. Only the human characters will be clad in colors, the two mortal women the only ones on pointe. And yet it is the mortals who often seem flickering and alien, even farcical, in their rushing about, unaware of the shadowy forces moving around them, oblivious in their own private obsession to how the supernatural creatures in this pale forest affect their fate. 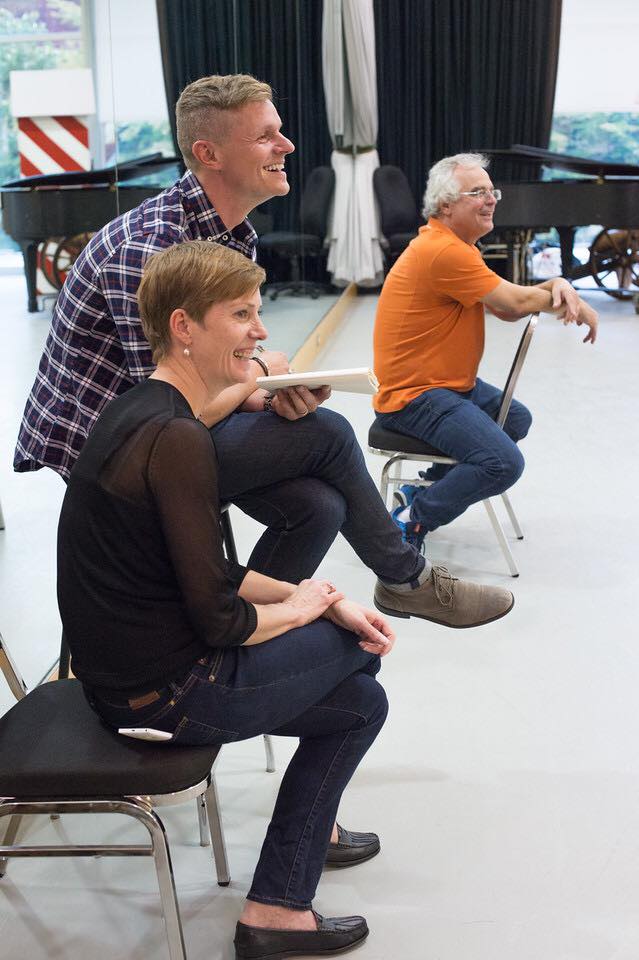 As Patricia remarks, “Olivier has isolated the story around Oberon and Titania and the battles all couples have.” She smiles and adds that the battles, “are what keep us interested.” The complex and ever shifting balance of power within the royal fairy couple’s relationship certainly keeps us interested in what can often seem a puzzling arbitrariness in their behavior. They may be immortals, but what makes these fairies tick, like Greek gods and goddesses, is often all too human, as is amply portrayed by dancers Yuka Oba as Titania and Nicholas Schultz as Oberon. 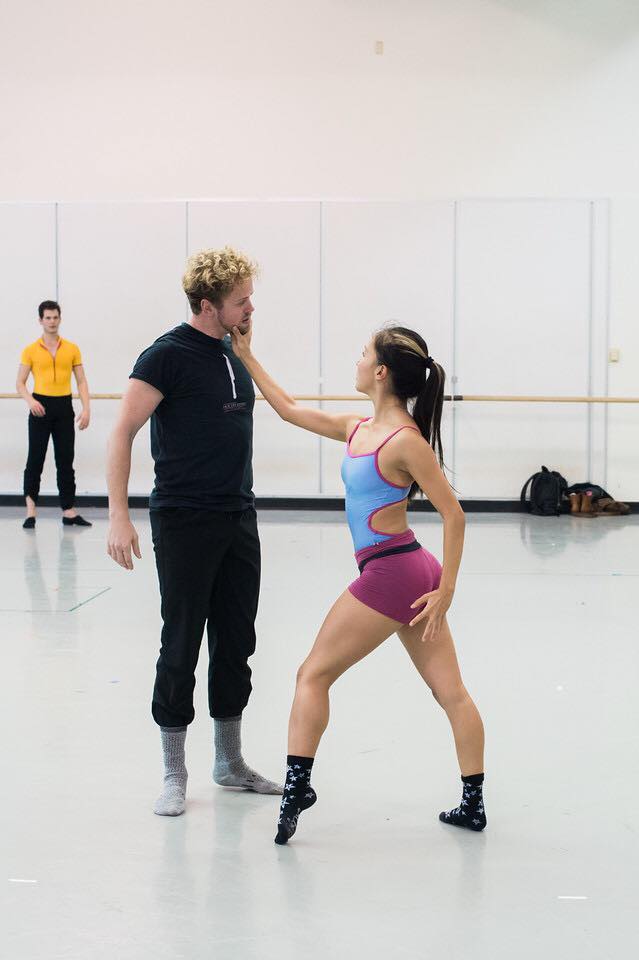 The traditional Shakespearean tale is placed, in the Olivier-GRB version, within a framing story. The summertime dream in question is that of a young boy, played by 13-year old Ethan Kroll, a preternaturally self-possessed young man off-stage, calm, articulate, and not put off by being the only kid in a room of adults. During company class, he follows intently and keeps up manfully even when the demands are beyond his training so far. 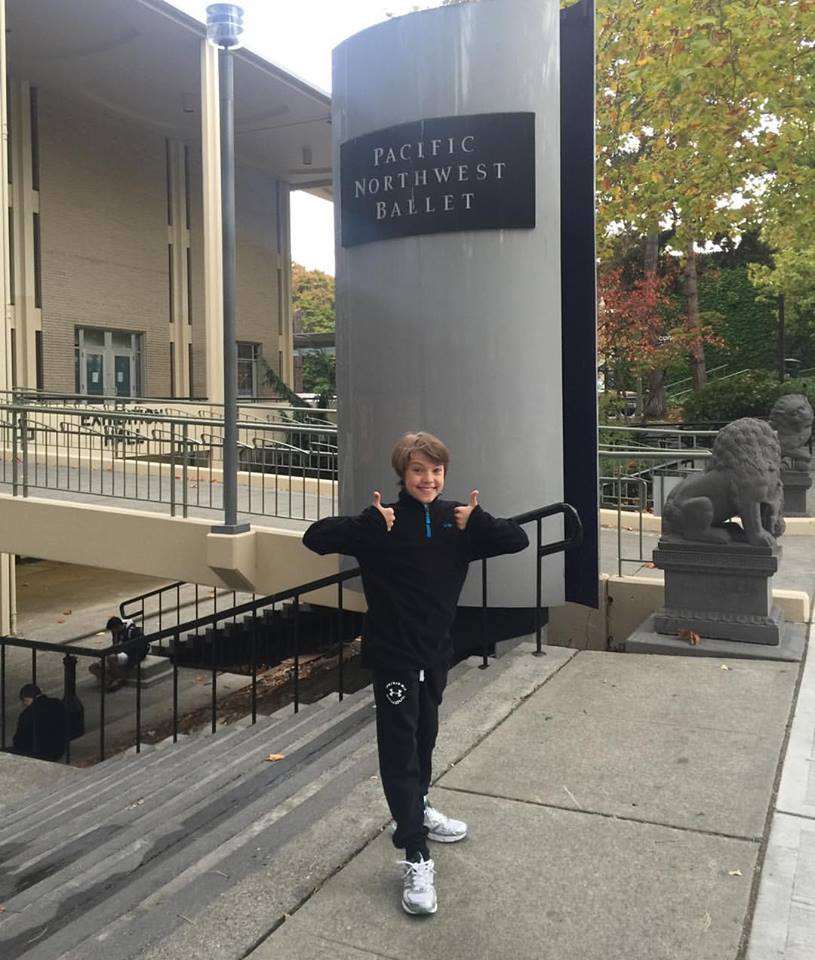 Describing his character in Midsummer, Ethan said yesterday, “I think of the part as someone who is a nerd, a person who loves to read, and who wants to grow up to be president. He’s picked on a lot and has no father, though he has a super great mother. He imagines a father in his dream.” I remarked that even in a dream of ideal parents, they still fight, Ethan just nodded. Asked him about his own path to dance, he replied that he’d started 3 1/2 years ago in a new GRB program on Monday nights, where young boys can take a free ballet class, while the parents go off to do something else. “I tried it and then said, wait, this is really cool!” He has really been bitten by the bug and now intends to be a professional dancer. 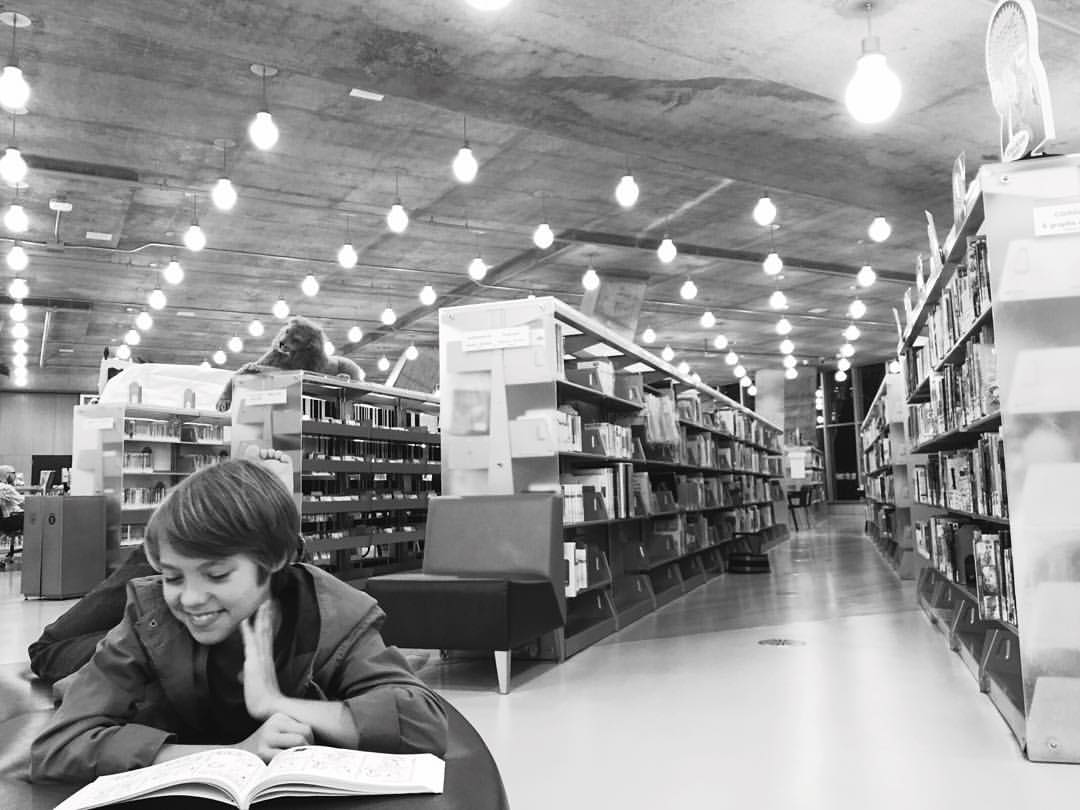 Ethan takes classes almost every day, likes both ballet and contemporary dance (which he does once a week), and is as great a reader as the young Nick Bottom whom he portrays. When I inquired about how he handles the inevitable teasing that he must get from being a boy in ballet, his aplomb didn’t desert him. He merely noted that those who dislike the idea of boys in ballet just don’t realize how challenging and rewarding it is. 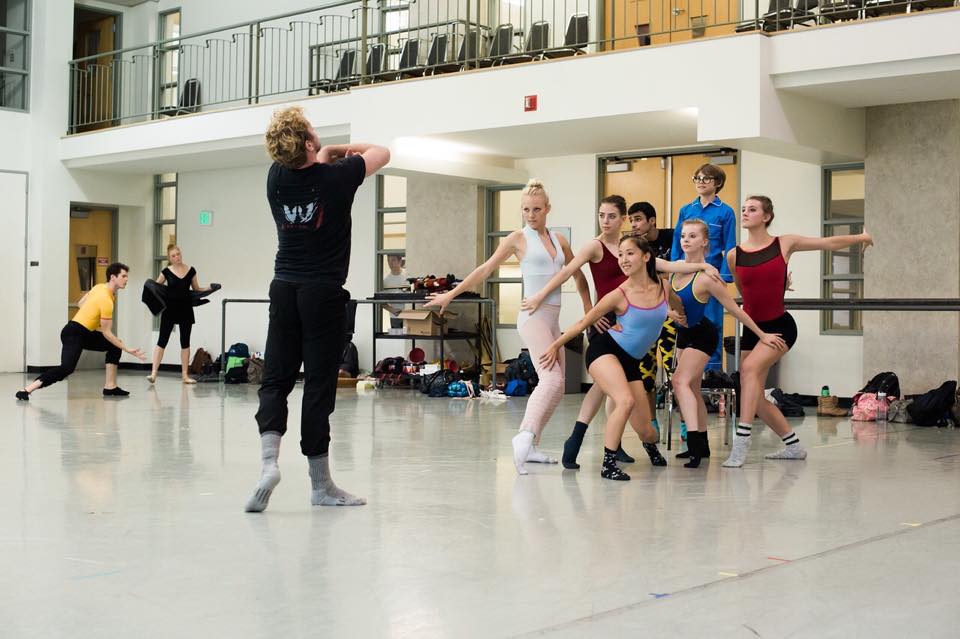 This afternoon is the dress rehearsal in the theater. Tonight is opening night of the 3-show run. *Tickets are available from Brown Paper Tickets at: Patricia Barker presents…

Also included in the GRB visit to Seattle will be 2 performances of Movemedia, contemporary works with choreography by Whim W’Him favorites Annabelle Lopez Ochoa and Penny Saunders, as well as David Parsons and Mario Radacovsky, whose company in Brno in the Czech Republic will soon premiere Olivier’s The Sofa.