the language of bodies – OUT-spoken opens

A Disagreeable Tale of Duplicity 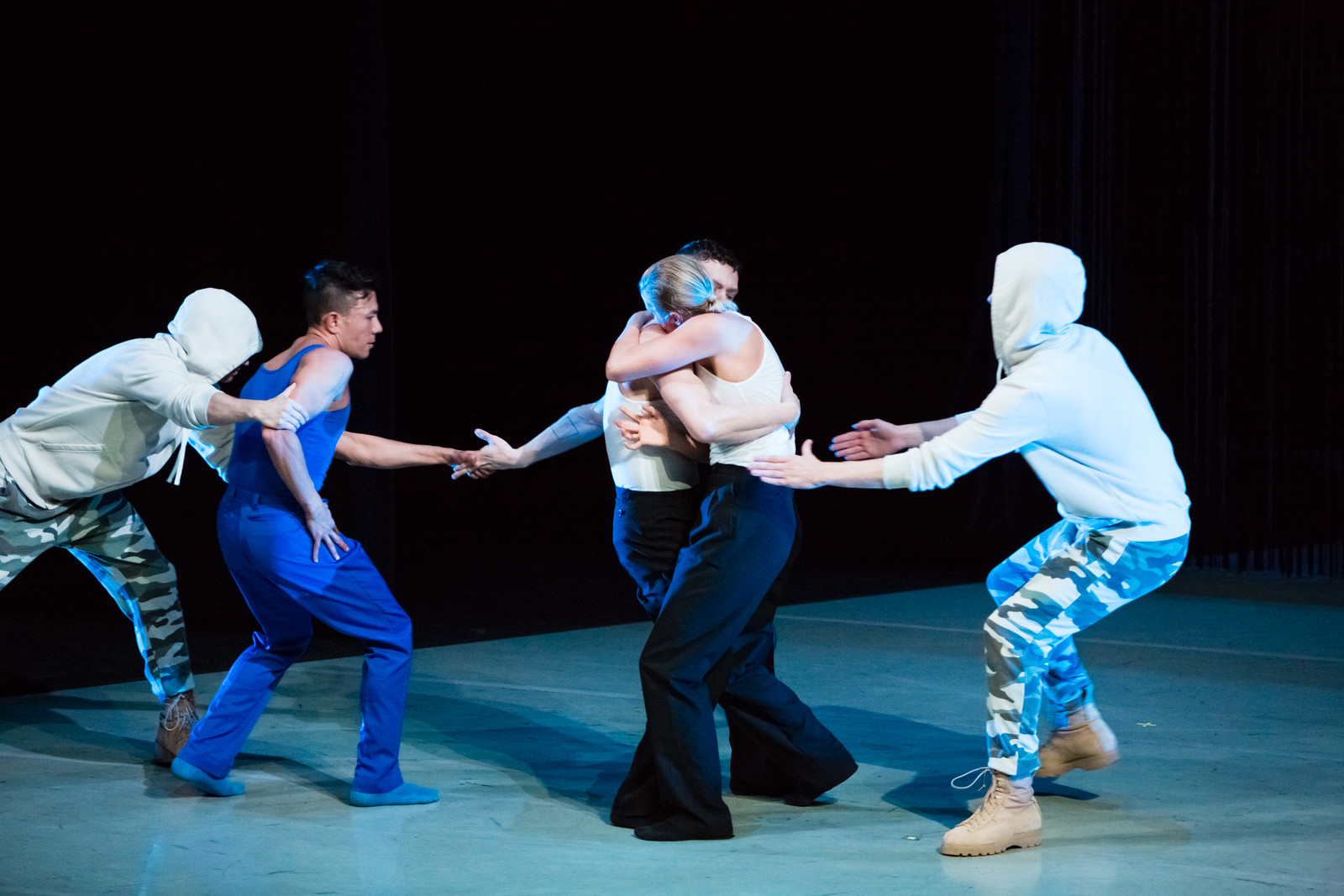 “Art can be healing for the creator, the interpreter, or the person who witnesses it,” writes Whim Whim artistic director Olivier Wevers, in his program letter for OUT-spoken, which opened last night at the Cornish Playhouse in Seattle Center.* “A personal story of struggle can resonate with everyone, not because our struggles are the same, but because we are all human, and at some point in our lives we all experience strife. I am excited, though also a bit anxious, to share with you tonight my latest creation, based on a very painful personal episode of my life.” 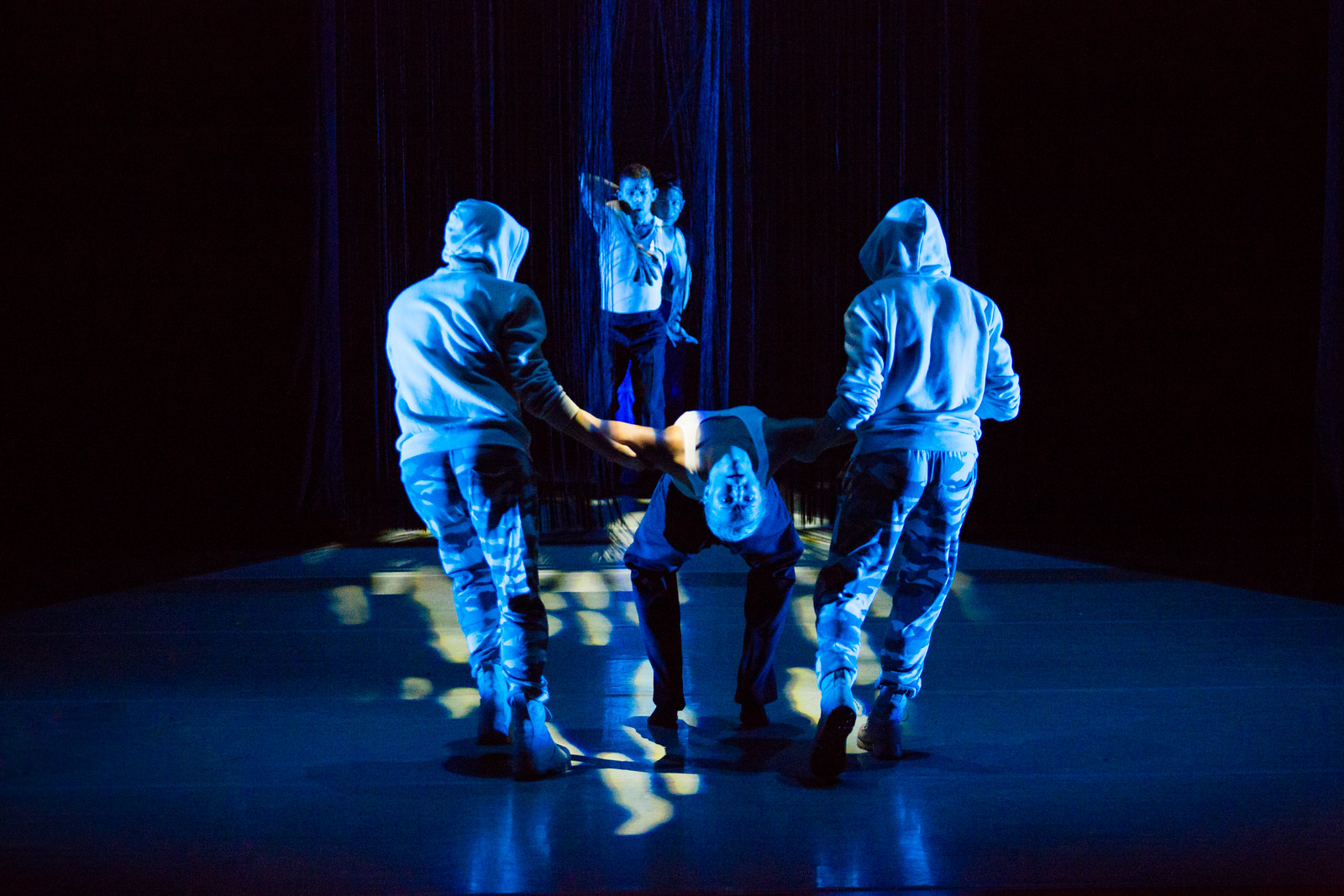 In a starkly dramatic geometric setting, a wrenching fable of love gone wrong unfolds, an anti-Romeo & Juliet. Through a jumbled cacophony of distorted sound, clear and poignant passages of Prokofiev’s R&J (from the 10 pieces in his beautiful 1937 piano reduction) well up to heartrending effect, as, in my opinion, Tory Peil gives the most emotionally raw and fluidly intentional performance of her career to date. Patrick Kilbane dances her hapless lover, tempted away by the alluring Jim Kent, in electric blue. Serving Tory with papers of some portentous import, an inscrutable figure portrayed by Justin Reiter seems to vacillate between sympathy and cold rejection. The mysterious pair of Kyle Johnson and Thomas Phelan—appearing to represent the weight of society’s conflicting demands in jack boots, camouflage and hoodies— march in and out, first to abet the besieged couple, then to cast Tory loose to face the nightmare seductions of Mia Monteabaro as a red-horned succuba and to shrink into herself alone.

Into you I go willingly 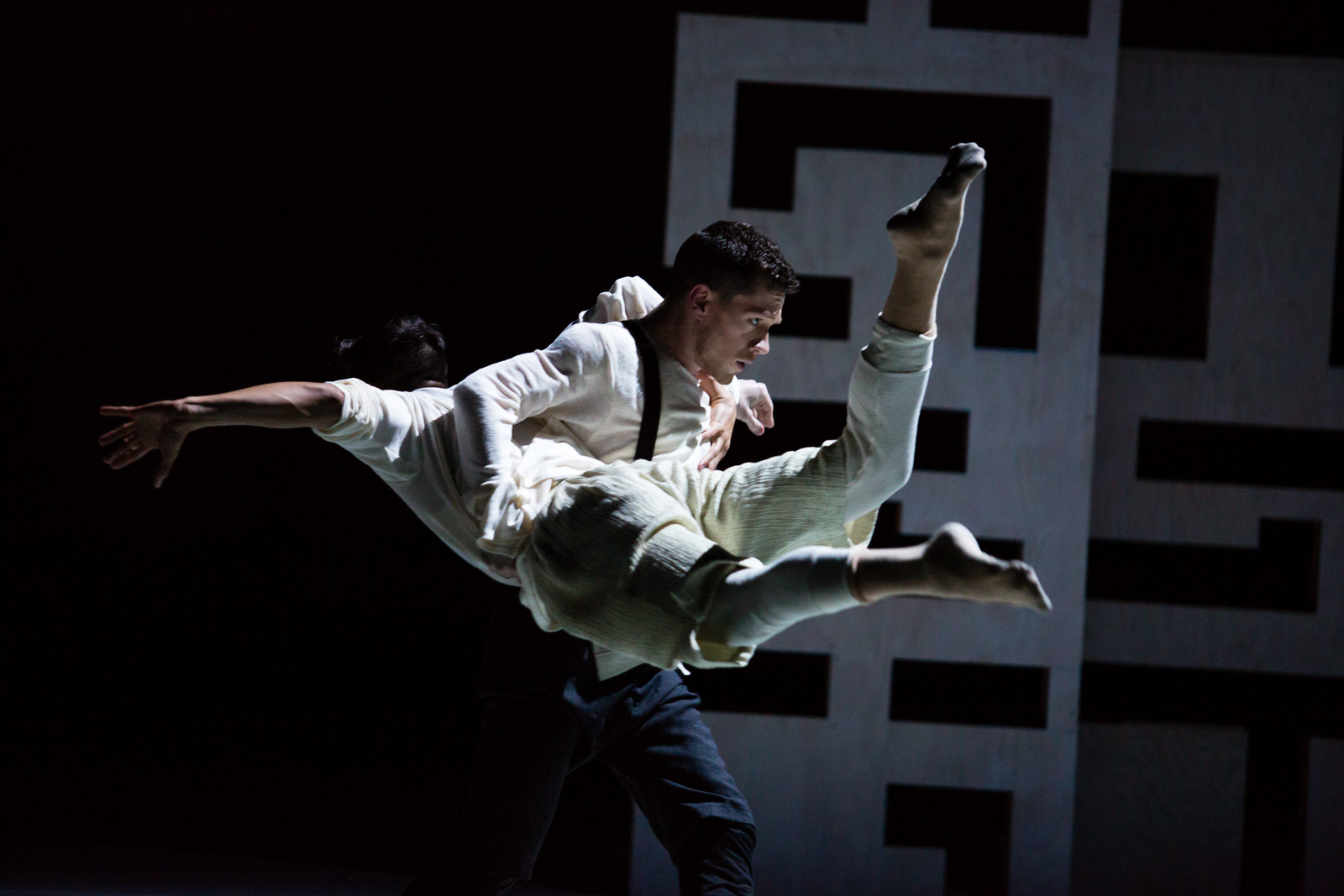 Each of the evening’s three highly individual works explores the dance possibilities of same sex duets. While Olivier’s Duplicity tells its tale of sexual passion and falsified love through out-sized situations and stylized characters, James Gregg paints an intimate double portrait of down-to-earth dimensions. Jim and Patrick, backed and framed by a vertical maze, explore the intricacies of personal relations between two very particular human beings, rejoicing in tender moments, struggling with misunderstanding, learning to let down their guard. 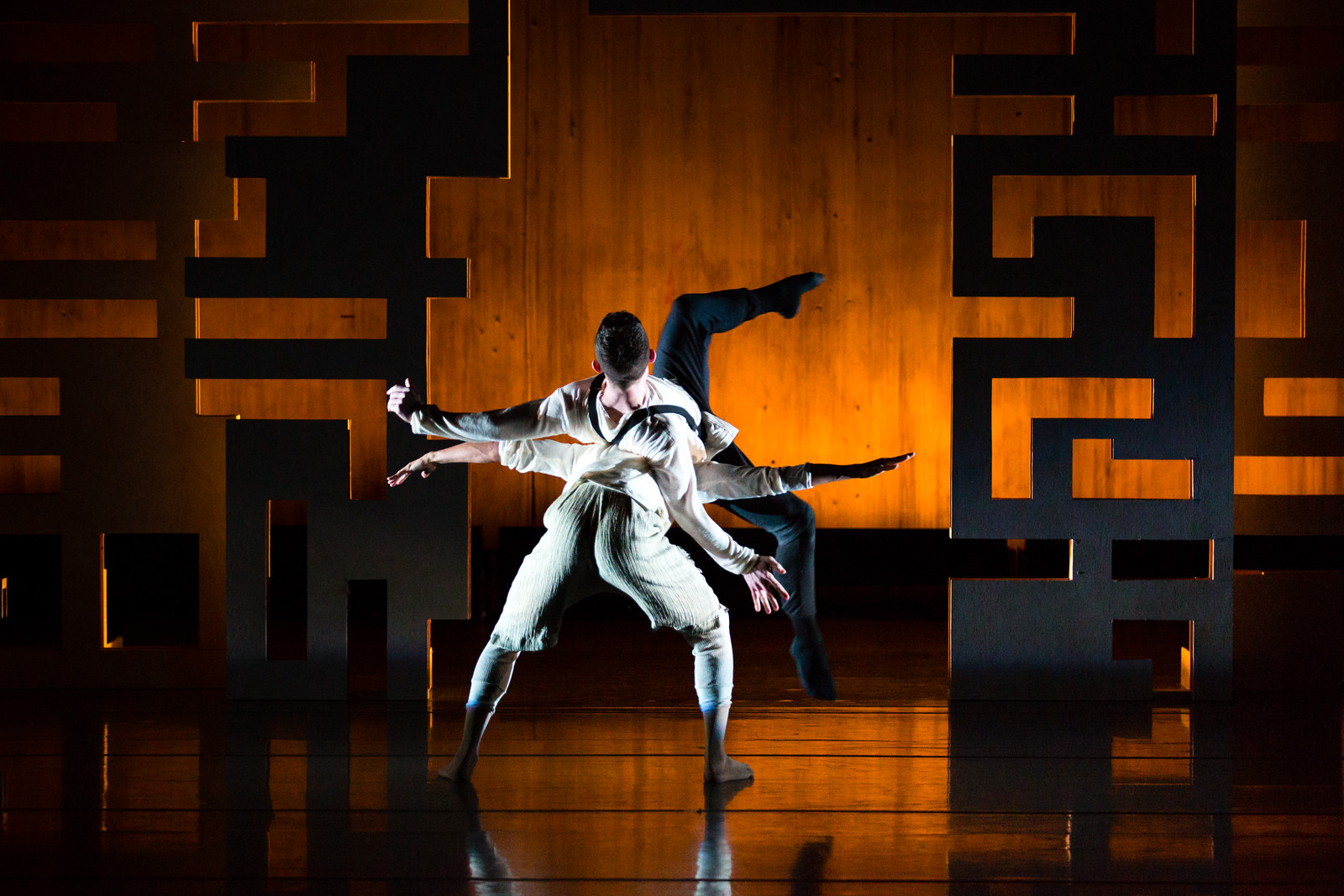 In the spirit of Pulp Fiction, a world of petty criminals is imagined as a colony of bugs. At once violent and absurd, they behave as one organism, yet display some weirdly human emotions. 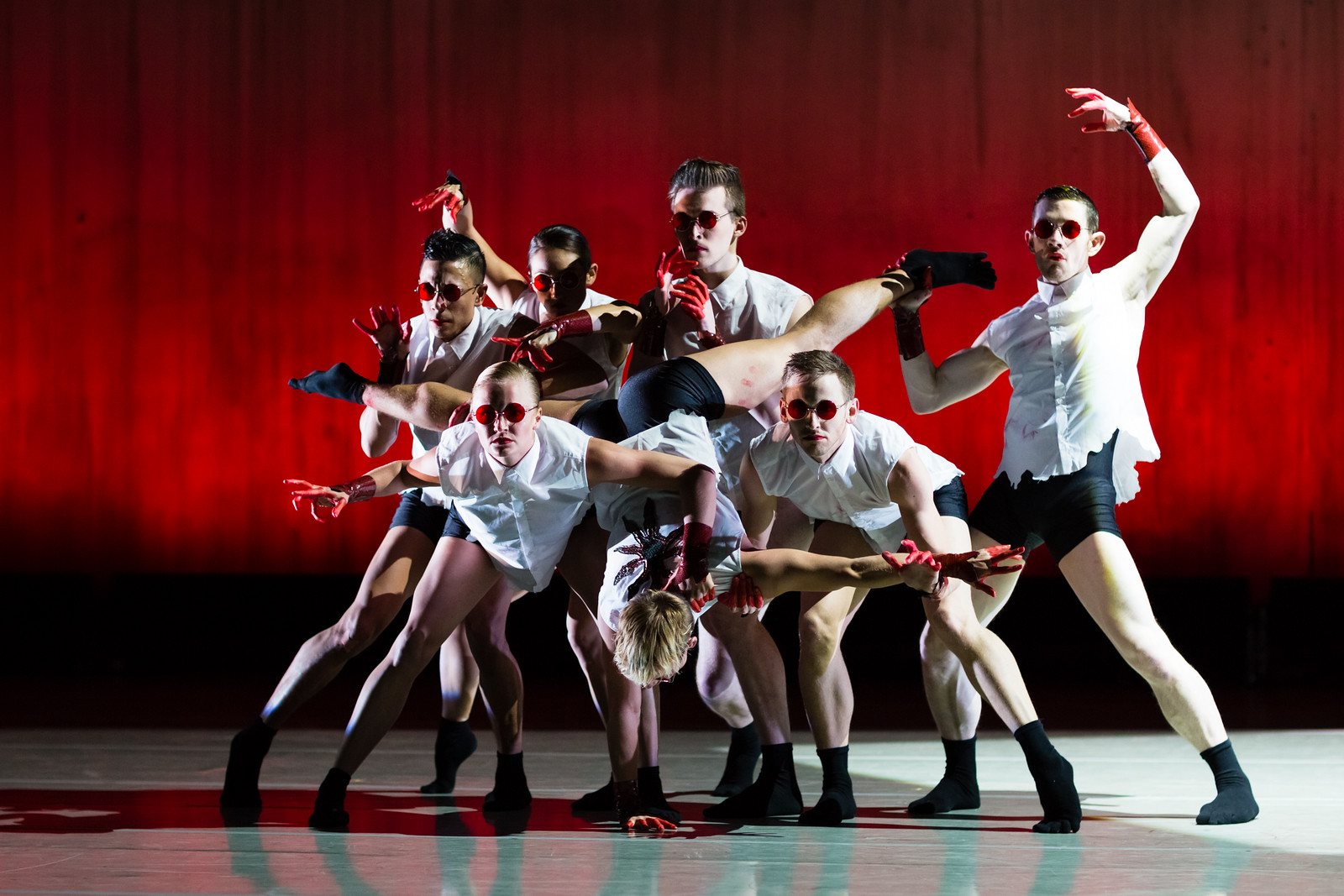 A hilariously campy duet for Thomas and Patrick (in startling red stiletto heels to Son of a Preacher Man), and its subsequent implications, are among the many highlights of Annabelle’s latest piece for Whim W’Him. Taking off from a Dutch expression that likens small-time crooks to insects, she conjures a hive or nest of bugs, who both need to conform and quarrel among themselves like a fractious family. Their dual nature is expressed in hand gestures (fingers as wriggling insect feet or pointing guns), abrupt bursts of frenetic movement, and crazy changes of pace. The creatures who inhabit this world, sometimes as roaches, sometimes as bad guys, are always totally engrossed in species-specific signals and in-jokes, the behaviors characteristic of their kind. And in the process, Annabelle makes some serious points about the nature of societal cohesion and the price paid for trying to be different. 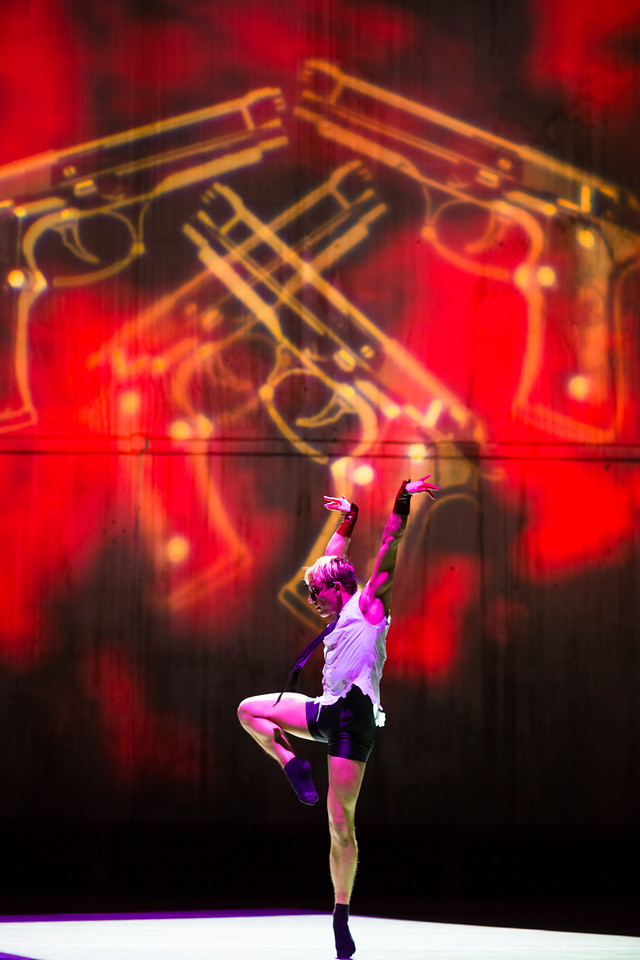 In all three creations, the choreographers have developed highly particular qualities of movement, languages designed to tell a story, explore a theme, or experiment with images of pop culture. As a consequence, the considerable dramatic force of the WW dancers is funneled through the movement itself, transforming them not into actors but into embodiments of the choreographer’s intentions. Annabelle’s bug/bad guy alternations are deployed with jagged wit and pizzaz. Patrick and Jim dance intensely in relation to each other, but for much of James’s piece they scarcely touch, other than via a hand to a cheek or a stretched out pull away from clasped hands, in fluid motion from start to end (except for one long pause). The almost ritualistic vocabulary with which Olivier endows each of Tory’s nemeses is riveting, while her hauntingly expressive hand gestures and supple body, flung about by forces outside of her control, are frankly painful to watch.

In answer to a question at the after-show Q&A on opening night, about what made the evening’s three pieces so striking. Annabelle said, and Olivier concurred, said that all of them came out of “what their creators needed to say.” Each piece grew from a choreographic necessity to find a way to communicate something that pressed urgently to be told.

(please note that due to illness the June 4 show has been postponed until a newly scheduled performance June 9. If you can’t make that show you can exchange your ticket for any other show or request a refund)