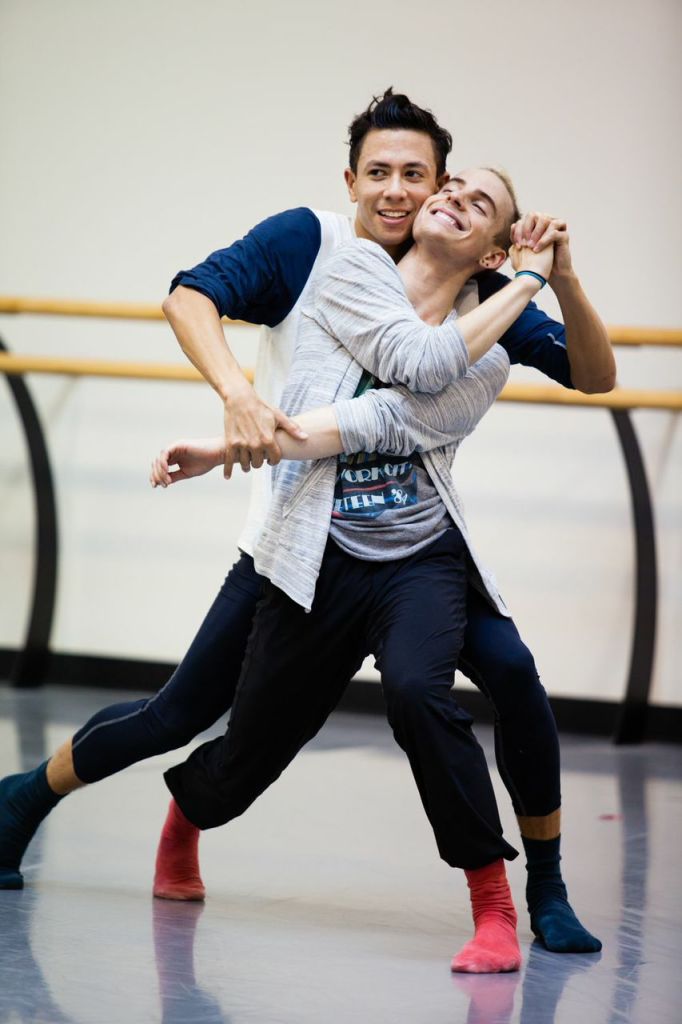 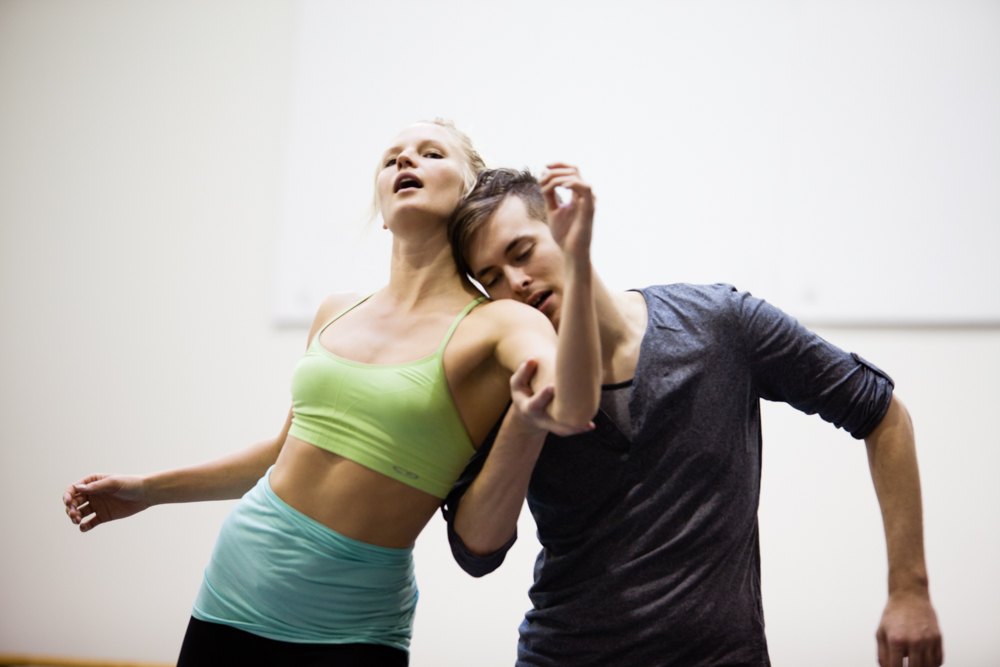 The piece, being created by Whim W’Him artistic director Olivier Wevers for the January 16-18, 2015 program THREEFOLD could be called “The same only different” or “different only the same”—or perhaps “same difference.” Its actual name is: We are not the same. As Olivier puts it, “Organized society and the media want the message of sameness. But we aren’t the same, with the same loves, interest, etc. Equal is not the same. We have to be tolerant and accept that, to embrace uniqueness.”

Unlike the “Society” section of Monster, Olivier’s first work to focus on a romantic bond between two men, this new one is an inside exploration of closeness and connection. Featuring two couples, one gay, one hetero, the piece concentrates on neither dysfunction nor struggles against society, but on moments of ordinary tenderness—
or confusion—within two relationships, detailing the absorption of each pair of lovers in its personal joys and complexities.

Speaking to the dancers on the first day of rehearsal, choreographer and Whim W’Him artistic director Olivier Wevers talked in snippets and snatches about…
“Love relationships
Abstract…
Moving lights a lot—simple lighting, highlighting a back alley or through a window,
Switching who’s in the shadow, but other things going on, so you can sort of relax.
Gay couple in shadows to start
Play with that…
Relationships, connections, their ups and downs
Each couple in its own world, just highlighted
Dramatic moments—
Lovely moments—
Let’s try not to have any effort, picking up partners like this … 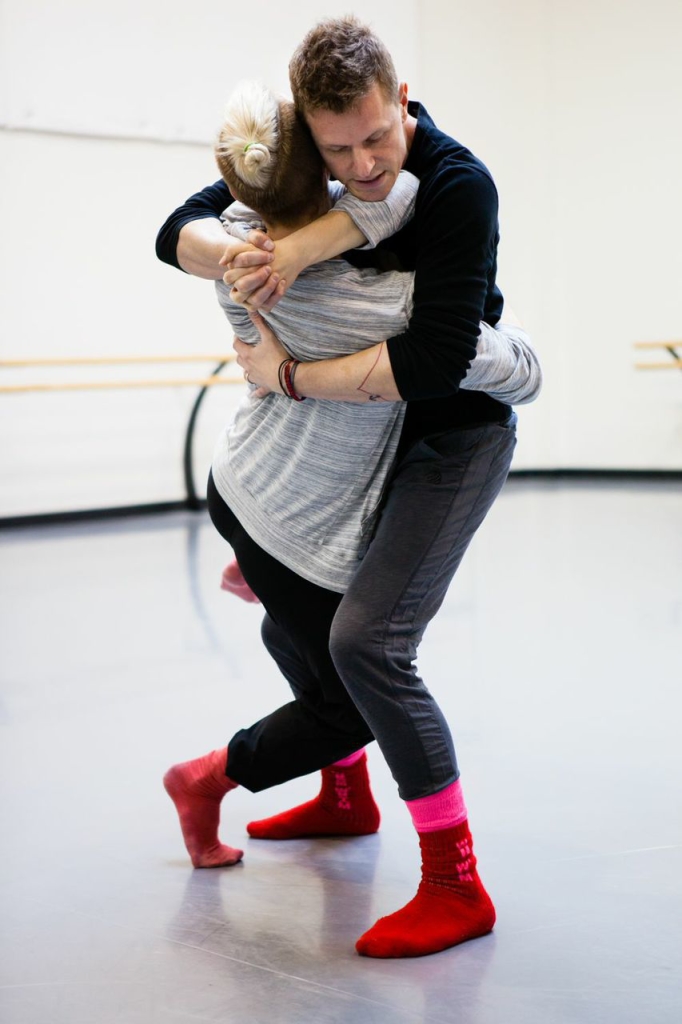 When you move from a pickup to a touch, try to make it interesting and complicated. Connection!!!!
Whatever you discover, keep exploring and don’t lose that with the other details we highlight to work on.”

The choreography, Olivier says, is “breathing,” which translates into a stronger-than-ever emphasis on transitions, on not taking positions, but rather allowing, indeed insisting on one movement’s flow into the next. His way of choreographing this piece is like that too. Throughout, when I’ve watched rehearsals or talked with him about We are not the same, the unpremeditated nature of the choreographic process this time around has been evident. An enormous amount of hard and careful collaborative work is taking place, but for Olivier at least much of it is more self-directed and less cerebrally originated than anything he’s done before.

He is trying here to get away from curated, static movement. And the music fosters and grows organically out of that progression. Brian Lawlor—self-styled “musical mutt” and “hypercollaborator” with Olivier on the score for last year’s I don’t remember a spark—wrote to me from New Jersey, shortly after their long-distance co-operation began this fall. “Here’s a quick rundown of some initial thoughts/ideas we’re playing with musically: Olivier said he wanted material from the Brahms Violin Concerto in D (2nd Movement), Symphony #3 (3rd Movement), and the String Quintet (op. 111, 2nd Movement) to be the driving force of the piece. He showed me some sample-based loop artist he liked that uses snippets of classical pieces in a more modern context (quasi hip-hop) as a loose reference point for some ideas. 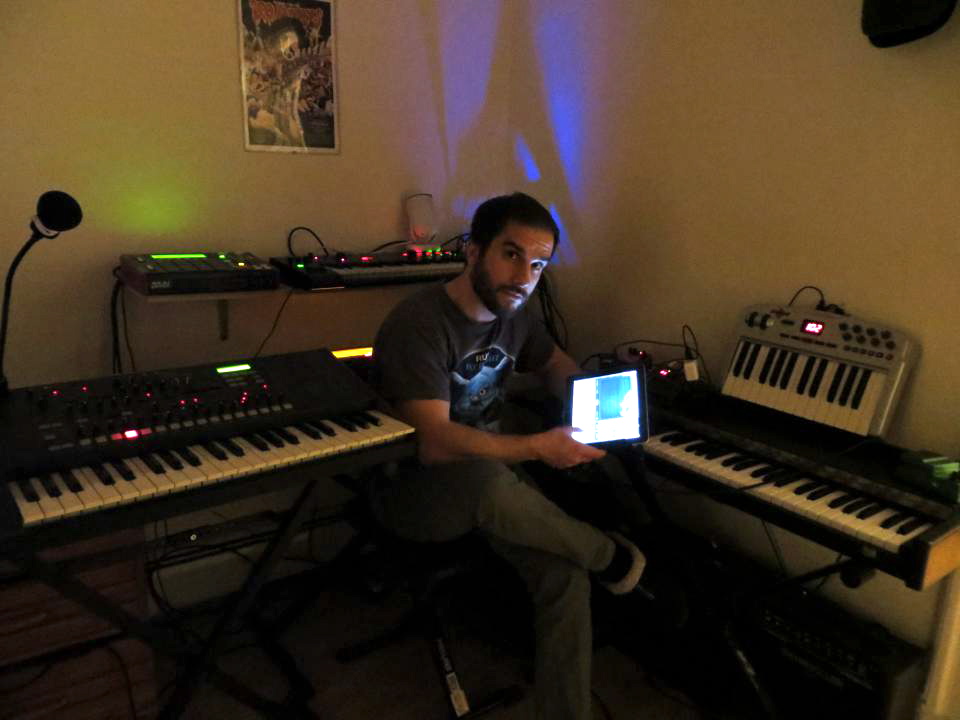 “My first process was just finding and creating small loops within those pieces. I spliced maybe thirty different small parts that I felt worked independently and am now playing with them to create something a bit different than the original Brahms. However, much of the piece (about 60% or so) will have Brahms’ sections in the original format, but I’m currently re-organizing the pieces—I’ll have a section of the Quintet modulate into loops from the Symphony while running some lines from the Concerto—to create a Brahms hodge-podge, if you will. I’m also composing on top of these. I’ll write some fairly melodic piano lines over different sections, or write additional orchestral parts to thicken up some of the Quintet parts that I like.

“Instrumentation-wise, I’m using various piano samples, quite a few virtual orchestra samples, some synths, and a lot of processing (pitch-shifting, reverbs, delays, speeding up/slowing/down) of the original music as a starting point.  So far I’ve sent him maybe 15-20 minutes of music. I’d say about half of that is useable so far! It’s not necessarily a linear process—which I like—and I’m looking forward to seeing its structure come together.”

Smiling, Olivier says of the dancers, “They’re so game and trusting and willing to try anything.” He teases them—about “Tory hands,” sort of loose and unfocused, or Kyle’s “suffering look”…

…and “the dancers laugh with and make fun of me. My crazy side coming out.”

Dance material was developed in segments or phrases. Making it all into a collage has come later. “Musically speaking,” contributes Brian, “the piece is almost there.
My favorite aspect about working with Olivier is his clear directive—he knows what he likes (and hates) and conveys it very clearly from the get-go upon hearing something.
Not much time is wasted in misdirection. Ultimately, I utilized all three pieces we discussed, but the Violin Concerto seemed to be the main connecting point. It’s the only piece that you will hear some form of in its entirety throughout the score.

“A few sketches that we loved in this work’s initial stages won’t even make it into the piece in the end.
I had to scale back a few of my ideas compositionally and orchestration-wise because it started to stray too far from our objective and feel like a completely different piece. The good thing about this for me, though, is that I have about 30 minutes of extra music that will find its way into something else.“

The process, Olivier says, “is like being in the middle of two brains”—intuition and feeling things out in the studio (in conjunction with the dancers and the music Brian has developed) tap into ideas that have been waiting a long time in him to be expressed.      “It is a big accomplishment to do this,” he says. “I don’t understand but I trust it. It feels good accepting, letting it happen for what it is. I don’t have to explain. After months of fund-raising, this is my Christmas present—mutual giving. This is why I do Whim W’Him.” 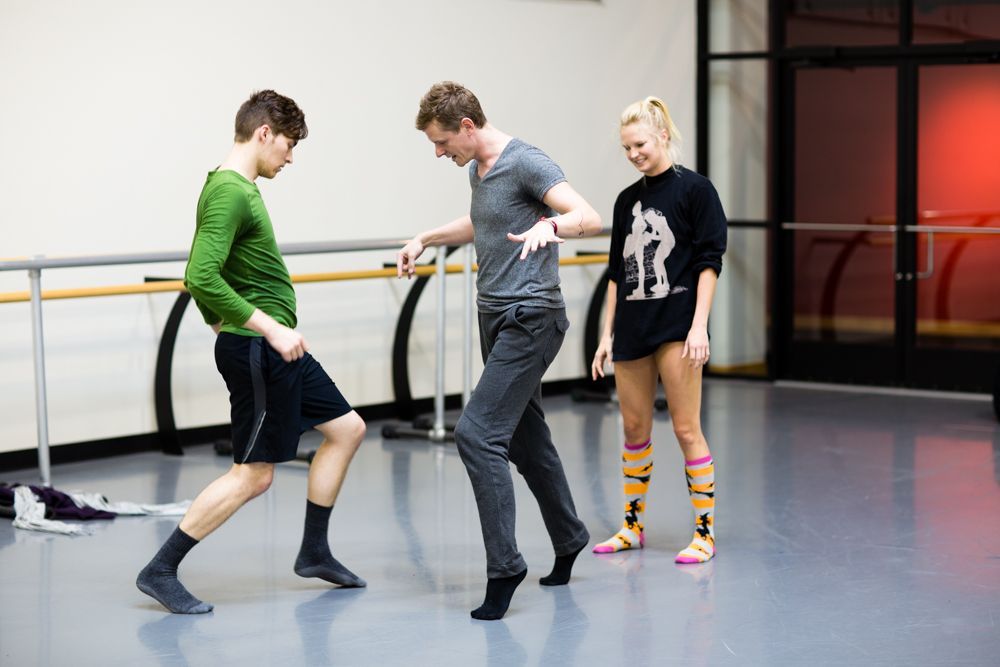