And now for something completely different…

The images by Stefano Altamura (see last week’s post) of Omar Román de Jesús‘ Welcome to Barrio Ataxia for Whim W’Him‘s Choreographic Shindig IV are dark and intense in subject and mood, deftly capturing Omar’s exploration of mental instability from within and without. The narrative and Stefano’s photos of Brendan Duggan‘s Stephanie Knows Some Great People couldn’t show more of a contrast, to start with at least. For one thing, words—inconsequential social chatter—are the most striking aspect of the soundscape. The program notes read:

Although we haven’t traveled far, we’re having a party so you’ll know where we are!

Please join us in warming our new home with cocktails and conversation.

All are welcome, feel free to bring significant others (or better halves 😀 )

No gifts please, your presence is the only present required!
Love,
Nathan and Jan
As the audience files back into their seats after intermission, Nathan (Karl Watson), alone in the spotlight stage right, is mixing drinks, concocting a ‘signature cocktail’ [a vile-looking concoction that contained, among other thing, gummy bears and even, one night, long green gummy worms]. He’s humming, tasting, engrossed in his task. 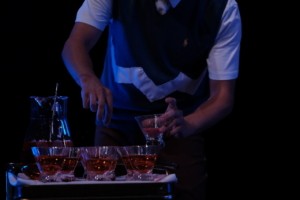 Nathan is a friendly guy, eager to accommodate, and devoted to his wife (Jane Cracovaner). 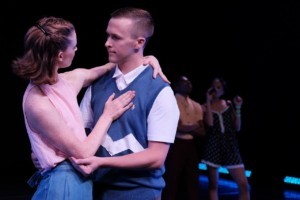 Presently, he hears unseen guests approaching and greets them with glib questions and little boasts about wherever [improvised differently by Karl for every show] he and Jan spent their summer. [In one of the after-show Q&A sessions, someone asked if any of the dancers had a background in acting. Karl laughed and said his acting career had peaked in fifth grade in Mary Poppins. For Brendan’s piece, “I was just trying to be people I’ve seen.” His character “is very far from who I am…. I drew on my desire to please, to give everyone a good time.”] 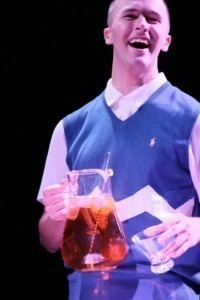 When we do see the invitees arrive, everyone is greeted with glad cries. An air of brittle artificiality crackles through the room like static electricity. 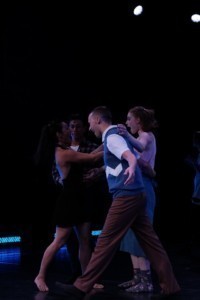 Party girl (Mia Monteabaro) enters with her big Look-at-Me smile. [Mia, who gives the exact opposite impression in ‘real life’ answered the question about acting “No! I hate talking on stage,” then added, “It’s a fun challenge. We’re always open…. Each time we become bigger artists because of it.”]

Her nerdy, serious boyfriend (Jim Kent) seems to be the one guest not trying to impress anyone or hide secrets… 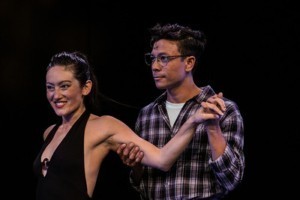 …though it later appears that there is/was some complex connection between the luscious, laughing lush (Liane Aung)… 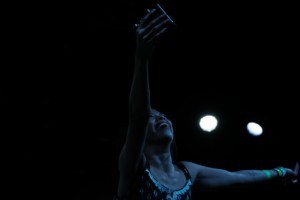 … and himself. [Jim says he loved the singing and dancing at Cornish where he trained, but not the acting. Brendan’s piece “was a huge challenge, definitely a very scary process for me.”] 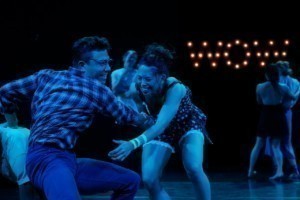 She, meanwhile, has brought a new boyfriend (Cameron Birts) to show off like a prize won at a fair, but quickly relegates him to a  mere supporting role. [As Liane said of this creation of hers, it is about “living the life to the fullest—in a very exaggerated form.”] 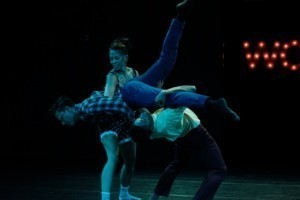 Only one guest turns up on his own (Adrian Hoffman), a socially challenged guy clothed in a ragged State of Mind t-shirt and a full suit of nervous tics and anxieties. 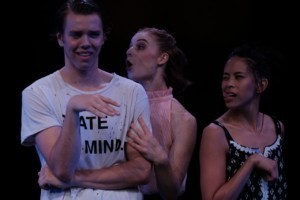 The party wends its way through an excitable View Reveal by the host couple. [If you crane your neck way over to the right you can glimpse the Space Needle!!!]… 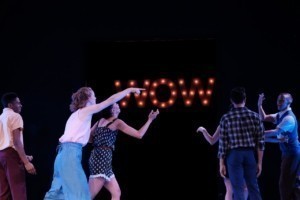 ..and a photo op where everyone’s hangups, pretenses and pretensions are captured for posterity. 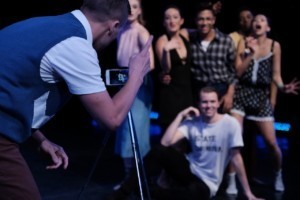 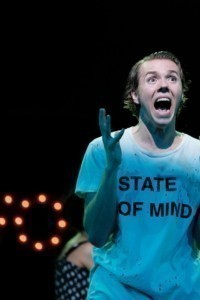 As he drops to the floor… 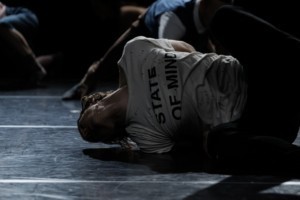 …it’s as if someone pulled a switch, opening a trapdoor to a nether region. The synthetic sparkle dims and fades. We enter a new territory, where things are not at all what they seemed and the persons hiding inside the guests crawl out from under the disguises they assumed above ground.

The house-proud, social climbing hostess and the frivolous, shallow party girl engage in a serious and lovely duet. 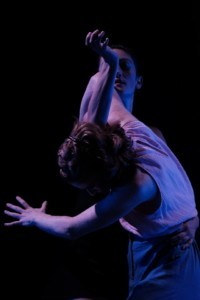 A beautifully enigmatic mirroring sequence unfolds between the host and his emotionally fragile guest. And others find new elements of themselves they didn’t perhaps never knew they had. 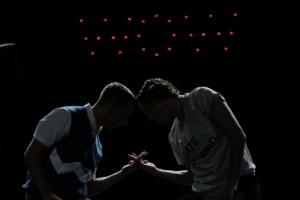 In the studio, during the creation process, Brendan said that as they talked about insecurities at a social gatherings and “the voids you ignore,” he encouraged each of the dancers to find some alter ego or different possibility to develop and a narrative to go with it.

Seeing the dancers embody these surprising roles reminds me of occasional dreams I have about people I know in situations or contexts where I’ve never seen them. On waking, I’m convinced I’ve glimpsed how they really would behave.

This is a piece about layers of being and projecting. It is especially beguiling because the dancers together picked the choreographer, then each chose, out of the rich mix of their own psyches, someone to represent, who in the on-stage rendering reveals different levels of truth about what a person is—and perhaps teaches something to the dancers about themselves?

When the characters all cluster toward the back of the stage at the end, the big sign in lights seems precisely apt. 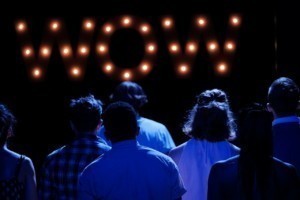