Born and raised in London of Turkish Cypriot parents, residing in Zurich when he’s not on the road, the peripatetic and prolific Ihsan Rustem has become a favorite with Whim W’Him audiences and critics alike. For the third time, Ihsan is making a new piece for the XPRESS program coming up January 17, 18, 24 & 25, one of three choreographers (the other two are Sidra Bell and Olivier Wevers) creating premieres for the company’s tenth anniversary year. 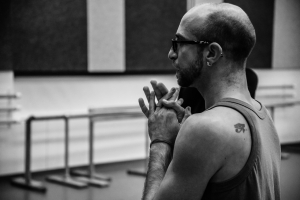 On his first day in the studio with the dancers, Ihsan starts with a bit of free movement “before telling what the piece is about.” Rather than showing the dancers what movements to make, he guides them in what to experience in their bodies.

“Feel your skin pulling away from your face, chest, butt.
“500 hooks pulling up in every direction, especially the head and neck—no tension ever.
“Compress. Like an accordion or spring in a mattress… Then choose another part. Pay attention to what you have to do not to crash.” 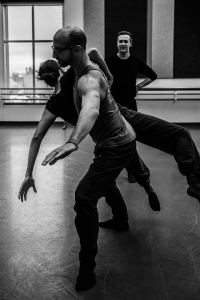 As the dancers bend and turn and lift their arms with rapt inward attention, Ihsan himself moves so beautifully, winding among them, embodying his words.

“It’s 3-dimensional—your head being part of the global reach.
“Focus especially on the roots, every fiber. Super-complex—and keep reminding yourself that the skin is pulling out, removing any potential for tension. Any sound your body makes on the ground is an indication that something went wrong.
“Don’t care about pointing the feet. Use your feet as tentacles, antennae.
“One more thing. Your eyes are not looking out at a point, but glazed over…this is research.”

“In the next 2 weeks, we’ll be thinking about length, expansion, tension, volume.”
“Dare to go further than you normally go.”
“And relax.” 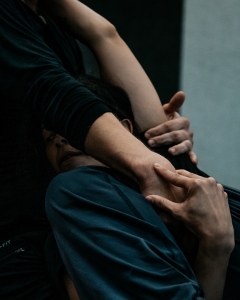 This start to the rehearsal process concisely illustrates elements of Ihsan’s distinctive ways of moving in his own body, of coaching dancers, of eliciting the qualities he wants to bring out in his work. Although he says this piece is a departure from what he usually makes—and it is in theme and structure—it exemplifies his approach to choreography, as both controlled and open, and his characteristic elastic seamless style of dance, at once intense and free of tension. It seems that for Ihsan his ideal is concentrated, powerful and intended motion that at the same time feels entirely unforced, like the movement of a panther. 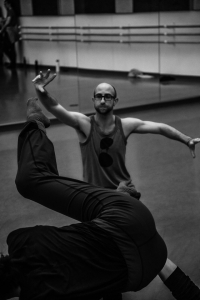 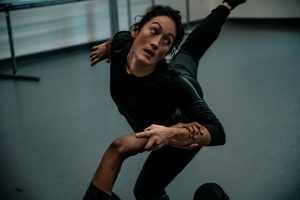 Now Ihsan expands on what has gone before, demonstrating. For all their smooth and sinuous continuity, his pieces are also punishing to the body (the dancers routinely bring knee pads to his rehearsals). At one point, when he instructs Cameron Birts, who is on his back, legs in the air, “Go higher up on your shoulder,” the other dancers and Cam himself are laughing. They look startled, perhaps a bit alarmed, definitely challenged. 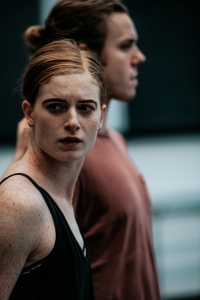 At the end of this sequence, the dancers take 5, then reassemble as Ihsan relays to them his thoughts about this new piece. “Ten years is a big achievement for a non-profit dance company. It’s also my third piece for Whim W’Him. What I have in mind is different from what I usually do, an abstract narrative, clear to us, only some bits clear to the audience. 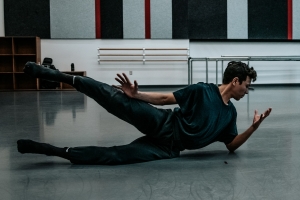 “In the life of a company there are three periods,” he continues. “The beginning. Where we’re at now. The future. They all contain our hopes, desires and fears. The music I’m tending toward is quiet, singer-songwriter stuff, but the dancing will be so frigging fast and furious…” 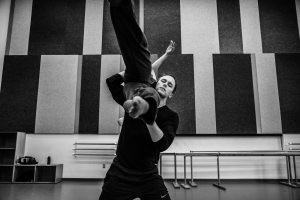 The next stage is for each dancer to do a bit of work alone. “Make a list, 10-15 in each category. Random. Not connected.”
Start with writing down little moments or scenes of “how you see yourself as a kid. It can be vocal.”
After a bit, move on to the current time, “not necessary to be dance-related.”
Finally, concentrate on “your hopes and fears for the future.”
“Fears,” he adds, “can be in any category.” 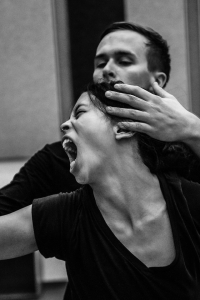 The dancers scatter across the studio floor singly, settling into the various positions that would be contorted if not impossible for the rest of us but are natural for dancers, and noting down their moments, working out how to show them. Ihsan roves around, commenting, suggesting, looking delighted. 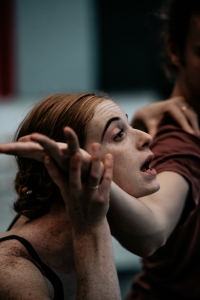 And then to round out the rehearsal before lunchtime, they each perform their moments for the others, first verbally and physically combined, followed by just the movement. Some bits are straightforward mime. Some—like Karl’s couple of swim-crawls and a flip to reverse direction or Jim’s graceful backwards swivel to denote skateboarding—capture the essence of an action in a few deft strokes. Some are simply comical. 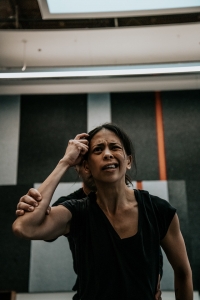 During the remainder of the two rehearsal weeks, Ihsan shapes material he has created, fed by ideas from the dancers’ life experiences, into a coherent whole. This despite there being, as he said in a conversation later on in the process, “certain elements like snapshots, random, not making sense. It’s a bit more raw” than his usual. He also noted that this new piece has many more duets and solos than is customary in his work. “There’s only one tiny ensemble bit.” 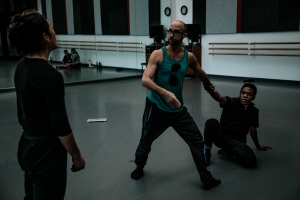 It is thrilling to watch how Ihsan works with the dancers, meticulously, without letup. Striving to make each movement supply the impetus and motivation for the next, he draws out of them precise execution and brilliant interpretation. Toward the end of his time in Seattle, at the culmination of several arduous work sessions on a particularly intricate demanding duet (which incorporated that startling shoulder balance I had seen the first day and of which, sadly, there isn’t really an exact photo), Mia Monteabaro and Cameron do a run-through. The watching company spontaneously applauds. 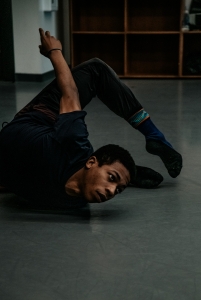