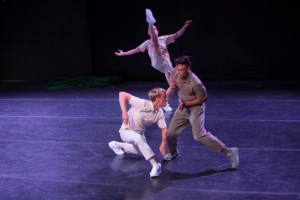 The run is almost over.
The last, and sold out, performance is Saturday night at the Erickson Theater.
Reviews are in, and good. 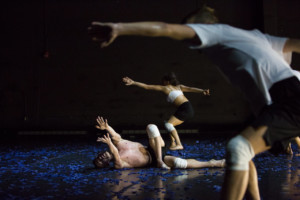 Writes Alice Kaderlin for the online PI, “It takes a lot of courage to start your own professional dance company, as Olivier Wevers did after a long and successful career as a ballet dancer. It takes even more courage to turn over artistic decisions to your dancers, as Wevers has done for two years now.” Meanwhile, Rachel Gallaher notes in CityArts, “Choosing a different path can be risky, but the payoff is beautiful individuality, as Whim W’Him artistic director Olivier Wevers well knows.” Reviewers and audience concur in pronouncing the Choreographic Shindig, now in its 2nd year, a highly successful experiment. 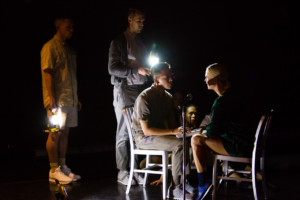 It’s an unusual experience for dancers to perform in shows whose choreographers they have chosen (see last week’s blog post). It is a different kind of test, of their mettle and pleasure in their work, for them to dance 7 shows instead of their usual 4. Speaking of his role as the part HPLovecraft-sci-fi-mad-scientist/part-psychoanalyst/part-cult-leader in Joseph Hernandez’s SARO, Jim Kent talked after opening night about wanting to go farther into his character, to investigate its creepy possibilities—a fine example of the ways time and reiteration allow a dancer to more fully embody a role or take it in new directions. During the spoken beginning of the 1st show, Jim is a calm, business-like researcher/doctor interviewing Tory Peil. But by the middle of the piece on the 3rd night, he seems to have morphed into an asylum inhabitant, taking on the obsessive and feverish characteristics of a patient, fearful, literally dripping sweat, and appearing close to out of control. 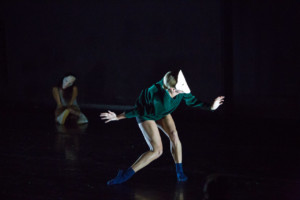 That this sort of explore takes place in a small black box theater, right in the face of the spectators and separated from them by no physical barrier, makes the experience more potent for performer and audience alike. 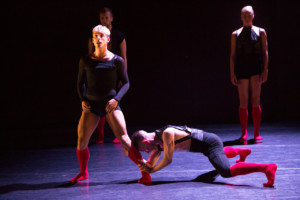 Joseph’s piece, the 1st on the program, has many references and many layers, leading some viewers to praise its depth and others’ to fault it as too busy for coherence. Gallaher writes that “Hernandez’s choreography is swift and strong. In a riveting duet between Patrick Kilbane and Justin Reiter, each of the dancers’ limbs seems supercharged,” whereas Upchurch finds that “the individual moments in ‘Saro’ (the title comes from an old folk song that emerges from the Beaches’ score) feel stronger than the sum of its parts.” 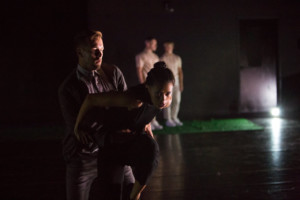 There has been much comment, by both spectators and critics, on the two dancers new to Whim W’Him this season. In Joseph’s piece, the “compelling” Liane Aung (Kaderlin), shows herself to be a “great addition to this fine group” (Marcie Sillman in her ‘And another thing…’ blog). Liane garners applause for her beautifully expressive hands and how her “lanky body extends her every movement to its farthest reach,” especially in her spellbinding centerstage solo that begins the dancing of SARO. 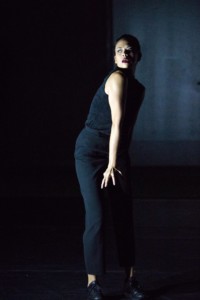 Similarly for Whim W’Him’s other new dancer Karl Watson. As Balanchine used to maintain, beyond a certain number bravura fouetté turns by a ballerina (e.g., the famous Black Swan solo) become a sort of circus trick. Same goes for multiple entrechat jumps, a time-honored vehicle of male balletic display. One of the most sly and amusing Swan Lake references in Jonathan Campbell and Austin Diaz’s tongue-in-cheek Swan Song is a casual tour de force, both comical and technically astonishing. In a baggy T-shirt and shorts (chosen on purpose to emphasize the disjunction between expectation and execution), Karl “launches,” in the words of dance critic Michael Upchurch, “into nonstop entrechats that culminate in a gradual and remarkably controlled body collapse.” 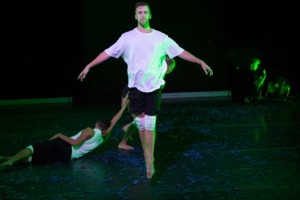 The other performers, too, come in for a good deal of critical praise. Sillman writes, “the dancers are dynamite, and it’s an opportunity to experience ambitious new work from fresh voices in the contemporary dance world.” Of Swan Song, in particular, she notes, “Campbell and Diaz take the beloved balletic swan and turn her on her ear. Beautiful Tory Peil stands center stage, arms extended and crossed over at the wrists, a pose familiar to anyone who’s seen ‘Swan Lake.’ Then, instead of the fluid fluttering arms of that19th century classic, Peil jerks and twitches to the flickering (at times painful) strobe lighting. Simple black and white costuming and thousands of blue faux rose petals add to the mood.” 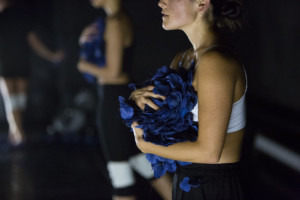 In fact though, as Sillman further remarks, “It’s hard to single out any of the seven fine dancers who comprise Whim W’Him. Peil is always technically and artistically strong, as is Jim Kent. And Mia Monteabaro continues to grow, as she demonstrated in Hernandez’ piece.” While also praising newcomers Karl and Liane highly, Sillman pleads for Whim W’Him to feature Justin Reiter, who is “such a presence,” more in future programs. As a corrective note, for the first weekend’s shows at least, all 3 pieces had to be deliberately modified to allow less of Justin on this program. He was suffering from an injury but was determined to overcome it sufficiently to dance, which he did such that no one could have guessed he had been sidelined a few days before. All the choreographers have expressed admiration for how seamlessly the dancers work together to find ways to work around the inevitable setbacks in a company of only 7 dancers and no understudies—among the beauties and challenges of new and evolving work. 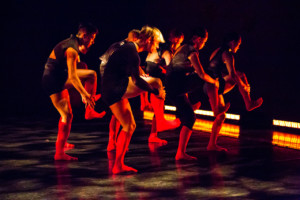 All 3 pieces on the Shindig2 program have something of a “loner-versus-the-crowd” theme, as Upchurch remarks. In the evening’s final work, Lauren Edson’s crowd and critic pleaser, Under the Cork Tree, that premise is the point of the piece. Based loosely on the classic children’s story Ferdinand the Bull, Lauren’s premiere is a classic coming-of-age tale about a young man trying to find and assert his individuality against the conforming pressures of the group. 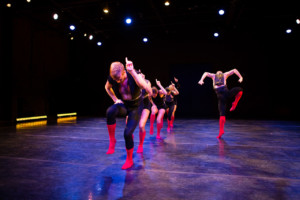 It’s not, of course, in any way a new subject for dance or any medium, but the whimsical Spanish references (bright red knee socks on all the dancers; bull-like poses by the Ferdinand stand-in; snatches of Bolero), the clarity of the dancing, and a couple of odd spoken-word interjections as he tries out, as it were, different voices, make this an unusual recounting. Ferdinand himself garners many accolades: Sillman speaks of “the amazing Patrick Kilbane as the quasi-Ferdinand. It’s truly a joy to watch Kilbane dance; his elegant epaulment, exquisite extensions and super human control over each muscle in his body are simply thrilling.” Upchurch writes that “His airy, elastic precision as he tries to find connection with his surroundings is a thing of wonder. Even when the six other dancers are doing dervish-busy spins and dives around him, Kilbane quietly holds your eye. There’s something about his contained yet slightly preening jig-like saunter at the margins of the stage that’s absolutely riveting.” 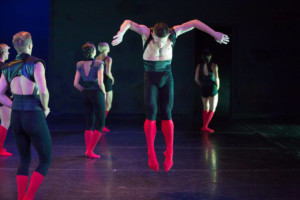 Rachel Gallaher concludes her review: “It’s often said that second efforts are never good as firsts (sophomore albums, second novels), but year two of Choreographic Shindig blew year one out of the water.” This year’s show at the Erickson has even drawn in non-dance critics like Dan Savage of The Stranger, who ends his review of the show with these words: “It was really riveting and I left the performance resolved to get out and see more dance in Seattle…. I just looked at tickets and the rest of the performances are sold out. But go anyway there will be a limited quantity of rush tickets available at the door starting at 7pm, and they’ll be selling standing-room-only tickets. So have some milk and cookies and go!” 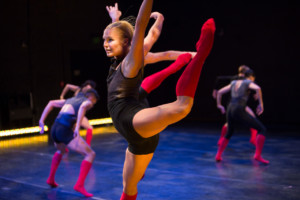