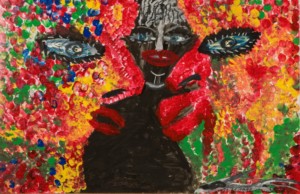 Music of Remembrance is a Seattle-based organization dedicated to remembering the Holocaust through music. Each year, MOR presents two concerts at Benaroya‘s Nordstom Recital Hall, to mark the anniversary of Kristallnacht (The Night of Broken Glass) each fall and Holocaust Remembrance Day in the spring. MOR also commissions new music and dance (this is where Whim W’Him comes in), produces CD recordings of concert repertoire and provides educational outreach to schools and the community in the Seattle area. While the Holocaust is the focus, the wider mission of MOR is “to present superb music that serves to deepen humanitarian values and strengthen tolerance, compassion, and a commitment to mutual understanding across bridges of difference.” Sometimes concerts feature music by or in honor those who died directly in the camps or ghettos; sometimes they concern those who suffered in other ways because of those horrific times. This May 21, the performance focuses on the experience of Europe’s Roma (gypsy) people during the Holocaust.
[For tickets | Music of Remembrance] 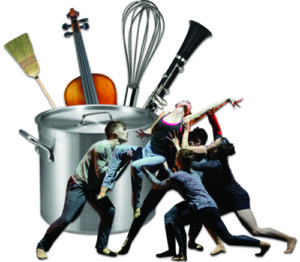 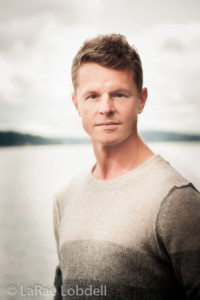 Olivier’s current creation—being set to Osvaldo Golijov’s “Lullaby and Doina,” from that composer’s film music for The Man Who Cried—is far more somber. 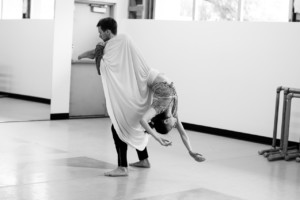 According to Golijov’s own description, “This piece starts with a set of variations on a Yiddish lullaby that I composed for Sally Potter’s film, The Man Who Cried. In her evocative film Sally explores the fate of Jews and Gypsies in the tragic mid-years of the 20th century, through a love story between a Jewish young woman and a Gypsy young man. Accordingly, the theme of the lullaby here metamorphoses into a dense and dark doina (a slow, rubato gypsy genre) featuring the lowest string of the viola. The piece ends in a fast gallop boasting a theme that I stole from my friends of the wild [Romanian] gypsy band Taraf de Haidouks. The theme is presented here in an almost canonical chase where the clarinet pursues the flute-violin combination flying away.” 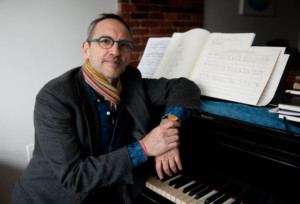 As reported by his website, “Osvaldo Golijov grew up in an Eastern European Jewish household in La Plata, Argentina. Born to a piano teacher mother and physician father, Golijov was raised surrounded by classical chamber music, Jewish liturgical and klezmer music, and the new tango of Astor Piazzolla. After studying piano at the local conservatory and composition … he moved to Israel in 1983, where he studied … at the Jerusalem Rubin Academy and immersed himself in the colliding musical traditions of that city. Upon moving to the United States in 1986, Golijov earned his Ph.D. at the University of Pennsylvania and was a fellow at Tanglewood.” Currently Loyola Professor of Music at College of the Holy Cross in Worcester, MA, where he has taught since 1991, Golijov is the recipient of a MacArthur Fellowship and the Vilcek Prize, among other awards, and has worked with renowned singers, musicians, chamber groups, orchestras and filmmakers world-wide. 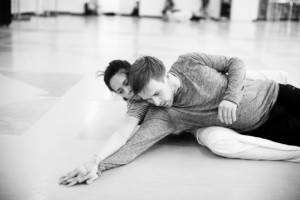 The two dancers for the piece are Whim W’him’s newest, Liane Aung and Karl Watson (who first danced the company in last fall’s Second Choreographic Shindig). The music is haunting, mournful and with that particular keening,  modal sound so typical of East European peasant and gypsy music. The doina is a Romanian musical style, possibly with Middle Eastern roots, also adopted into Klezmer music. 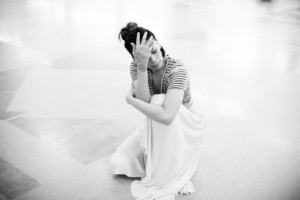 A lamenting melody for clarinet flows through the studio. Liane kneels in a contemplative position, then unwinds into a sinuous solo before she is joined by Karl, as the clarinet joined by flutes and strings. 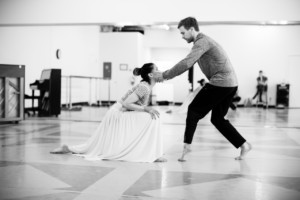 The poignant piece, only seven minutes, will linger in the imagination far longer. For most of it, the dancers under Olivier’s tutelage convey both the bliss of a young relationship and the couple’s struggle against the forces that will cut it off in its first flower. 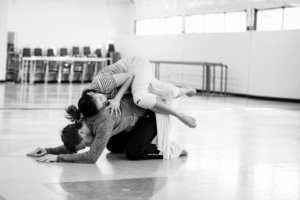 The music for the final minute and a half is fast and wild. When he began work with the dancers, how it would come out was not known, at least consciously, even by the choreographer himself, who said of it a couple of days ago, “I don’t know how it’s going to end yet. I will know once it happens in the studio, I guess.”

The piece is finished now, as Olivier emailed me (I am out of town). “I like the ending a lot for this music. Can’t wait for you to see it!” 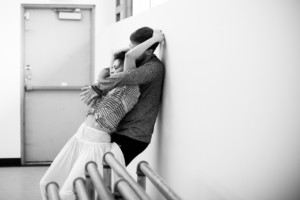 Next up: Approaching Ecstasy, the acclaimed collaboration between Olivier and composer and Esoterics artistic director, Eric Banks will be restaged for the June 2017 Whim W’Him program. Also look for another post on the Music of Remembrance program closer to the performance date, May 17, 2017 at 5:00 pm.