On arriving back from several months on the east coast, I intended to start a new series of posts with Ihasan Rustem‘s new piece, now being created for the January show. But then Molly Magee uploaded a host of beautiful Shindig III photos from September into the Whim W’Him archives—on behalf of herself and Bamberg Fine Art Photography’s other fine artists, Kim & Adam Bamberg. So I can’t resist sharing some of them in the blog.

Although at first I meant to choose 3 of the most quintessential images for each of the 3 pieces, that idea soon fell by the wayside, since I couldn’t narrow it down that far. So the number now is 5 (plus these 3 black & white intro photos). It’s hardly sufficient, but one has to stop somewhere!

As The Background Hum of Stimuli by Bruno Roque opens, Whim W’Him’s 7 dancers are oblivious to one another, entirely absorbed in their cellphones. A robotic voice urges them to try putting down their phones. Reluctantly obedient, they place them on a little table. Bit by bit, to the spirited jazz of Art Blakely, they loosen up, introduce themselves and even start to get together. 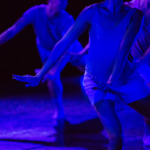 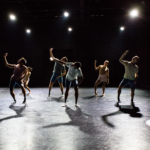 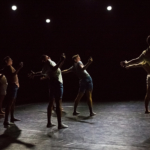 Adam Barruch‘s Summoning is magical, in the literal sense of the word. Hands framing, explaining, conjuring, beseeching. A branch. A snake-like stick. A bowl. A septet of stones. 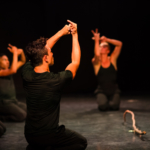 In her ongoing Limitation Etudes, of which studies 7-10 premiered as part of Shindig III in September, Banning Bouldin inquires into how physical illness, like her own auto-immune disease, can both curtail and expand one’s known world. 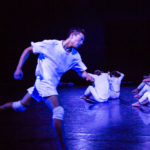 Next up: The working process of Ihsan Rustem and the making of January’s upcoming program CONFIGURATE on the themes of Love, Compassion, and Empathy.