This summer while Olivier Wevers was choreographing Monster/Society, I was out of town, then still gone for Men in Dance when this duet for two men was first performed in early October by Andrew Bartee and Lucien Postlewaite.

It has been tantalizing and frustrating to get a grip on writing up a piece, having only seen still shots and heard general thematic descriptions. Not until Vincent Michael Lopez came back to Seattle to learn one of the parts last week, was I able to see Society in the flesh.
The premise of the piece is quite simple. Society becomes a monster, when it disrupts love because it disapproves of the sexual disposition of two lovers.

There are some arresting images—repeated hands in front of faces, bodies curled, in unison but separated, a slanted vignette of anguished rejection.

The real impact of Society, though, comes through the particulars of how it is danced.

Olivier is well-known (one might even say notorious) among his dancers for the precision he requires in carrying out the movements he has designed. But it’s not just steps, his exactitude in positioning. It’s the manner in which he describes and demonstrates what is to be conveyed, utilizing his own long experience as a dancer and his gift for telling metaphors, often whimsical despite the somber subject of the work. “It’s just like you’re baking a cake and your hands are covered with flour and sugar,” he might say, “and your pants are falling, so you pull them up like this—?” He makes a gesture with the sides of his hands at the hips, and you know exactly what he means. Or, “Once you’ve learned it, the tendency is to get ahead of the music, I’d like it to be exactly after it, so it’s really grounded. Even when I say accelerate, it’s heavy, like under water.” Or “Try not to show Fall. Legs. It’s falllegs, all in one movement.”

The movements in Society are, as Lucien says “flowy”. There is nothing angular or abrupt in the relation of the two dancers. Any sharp changes of direction are brought on by forces outside themselves.

Vincent notes that in most pas de deux of a man and a woman, even in modern dance, “The male is almost always taking care of the female.” Their respective roles are determined by gender and dance convention as much as or more than by individual personality or circumstances. In Monster/Society, the two men are, in the nature of the choreography, equally tender and protective of each other.

In rehearsal, Olivier repeatedly emphasizes this point. “You are lifting each other up, he’s not helping you. Almost the less you partner him the better,” or “This looks as if you’re surprised and a little afraid of him. It should be more of an embrace..” Several sequences are done twice with the roles reversed the second time round. 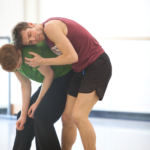 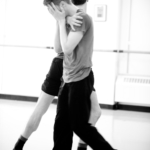 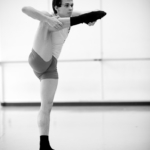 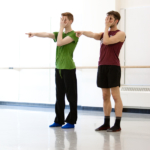 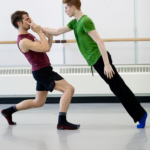 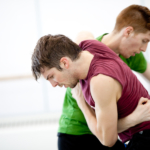 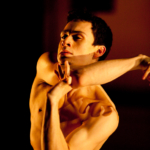 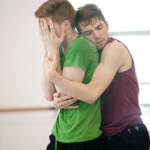 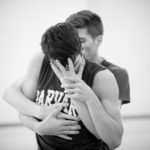 In the rather gloomy conclusion of Jennifer Homas’s marvelous new book, Apollo’s Angels, A History of Ballet, she writes:

“Uncertainty and doubt have crept in. Many of today’s dancers, for example, have a revealing habit: they attack steps with apparent conviction—but then at the height of the step they shift or adjust, almost imperceptibly, as if they were not quite at ease with its statement. This is so commonplace that we hardly notice. But we should: these adjustments are a kind of fudging, a way of taking distance and not quite committing (literally) to a firm stand.”

I particularly noticed these words because of how often I have heard Olivier say some variation on: “Try not to adjust the legs. Wherever they are, they’re planted.” And the dancers respond to the choreographer’s subtlety and assurance. Their confidence grows. Movements become convincing and convinced…

And yet, despite the meticulousness of Olivier’s instructions, I have been struck over and over this last week—watching both a recently completed video of Andrew and Lucien and live rehearsals of Andrew and Vincent in the two parts—by the two very different accounts given. The choreography has a transparency which allows the individuality of different pairs of dancers and the different physical dynamics between them to shine through.

The change of cast came about because, although he performed the role in October’s Men in Dance program, Lucien will dance the Relationship segment of Monster with Melody Herrera of Houston Ballet in next month’s premiere, as well as a major sequence in Annabelle Ochoa Lopez’s Cylindrical Shadows. I asked Andrew, who is the constant in both pairings for this piece, what it was like to switch partners in this particular piece. He says that, while he and Lucien are more or less similar in build and in training (the two are members of Pacific Northwest Ballet), Vincent is smaller and more compact of stature. He also dances for Donald Byrd’s Spectrum in Seattle and with Wideman/David Dance in South Carolina, both modern companies with a very different sensibility and approach to dance.

Eager to learn what he can from new works and styles, Andrew seems to find the process totally engrossing and works hard to get it right.

“Dance,” Vincent says, “is always intense,” and he brings his own passion and questing spirit, despite little experience with partnering, to the Monster/Society enterprise.

As a gay man, says Lucien, dancing in Society is “like coming home,” and of course, he confesses, he’d love to perform it again sometime. But he also says, philosophically, “You’ve got to give everyone a turn”. Just another example of the respect and consideration of the dancers for each other, and of Olivier for all of them, that continues to be a notable characteristic of this company. No prima donnas here.

Photos by La Vie Photography LaViePhoto.com
(Unfortunately there are no shots yet of Andrew and Vincent rehearsing, but the final round of full-cast rehearsals for the whole program is coming up in January.)

CONGRATULATIONS ON THE BIRTH, DECEMBER 22,