IN-spired – in the studio with Dominic Walsh

I felt as if I had slipped into the lair of a magician, not the sort to do mere sleight of hand or clever card tricks, but the real thing, who knows how to turn princes into frogs or make dolls come alive. In this laboratory of enchantment, dancer Justin Reiter skims about the room, no melodrama, just a business-like seriousness on his face. A flick of his wrist, a snap, a pointing finger, and an immobile dancer moves to his silent commands. 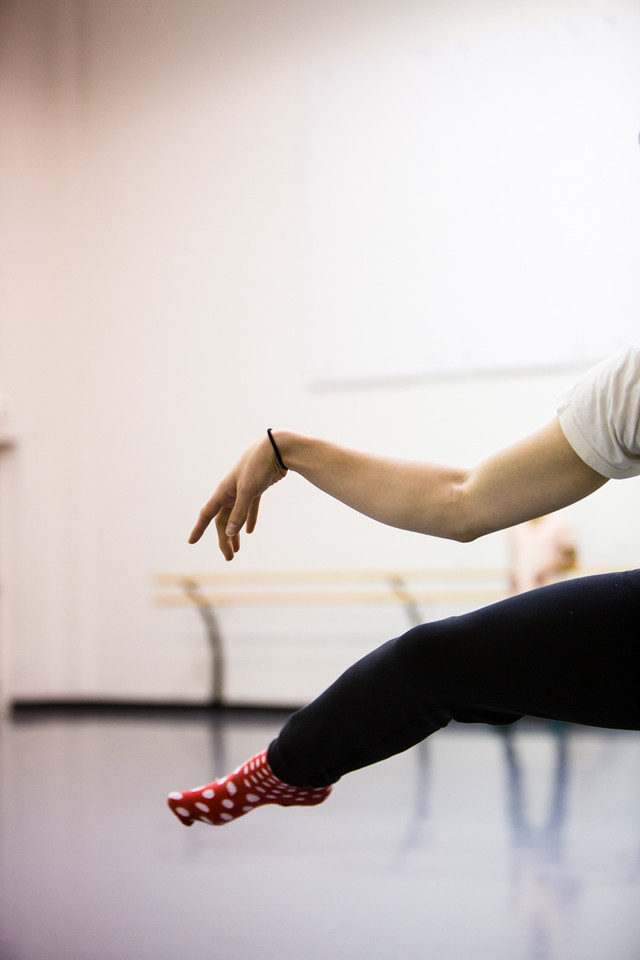 As if using gestures learned from his experiments with the others, Justin impels his puppet (perhaps his creation?)—Whim W’Him‘s newest dancer, Patrick Kildane—to do his bidding. Choreographer Dominic Walsh has some reluctance to spell out ahead of time his intentions in this piece, his first for Whim W’him.* “It’s always a struggle how much to tell, how much to let people decide,” he says, then adds, “I will tell you I am interested in the question of choice and the willingness to participate—that’s how our life is sculpted—what that might look like in another realm.” 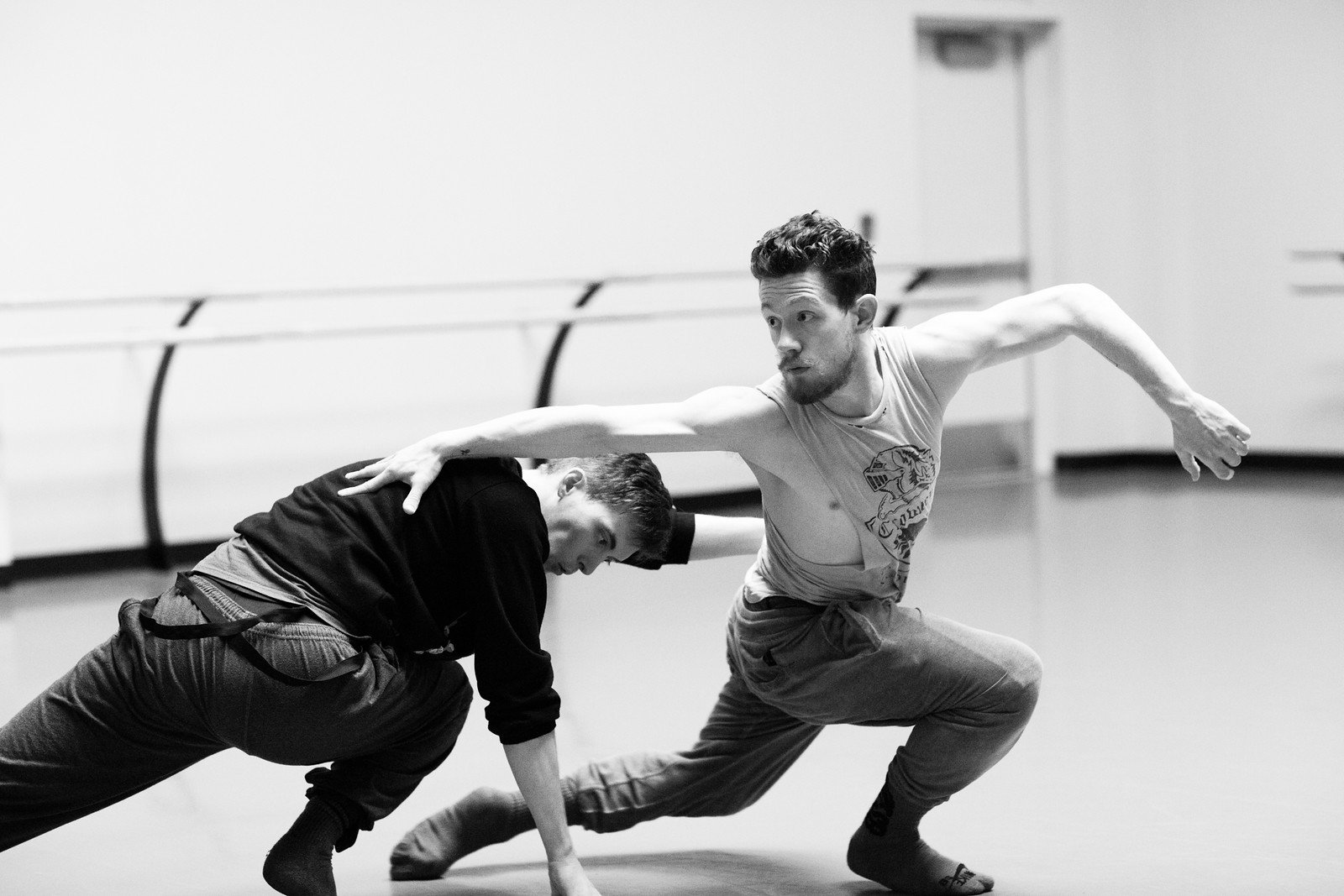 In what I have seen so far, the enigmatic Patrick seems mostly under some spell. He has moments of apparently independent action, but more when he is manipulated by others. 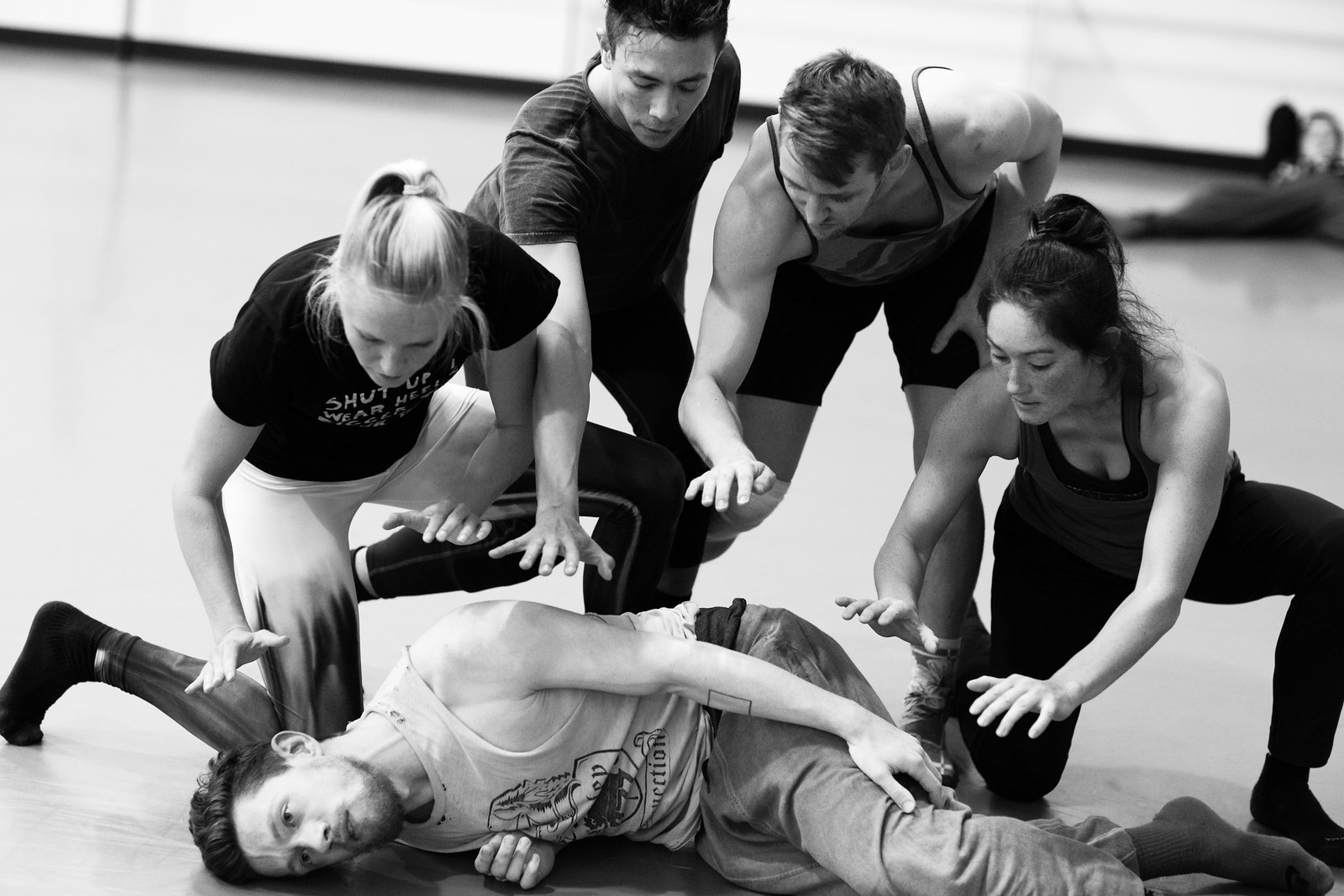 The question, as Dominic puts it, is “In what way am I a writer or participant in my own story?” Perhaps there is “the higher composer, and conductors in between.” Without being victims, “How do we stagger through with our limited information and limited understanding, especially of time? We still have to suffer, experience anguish. It’s what we sign up for.” 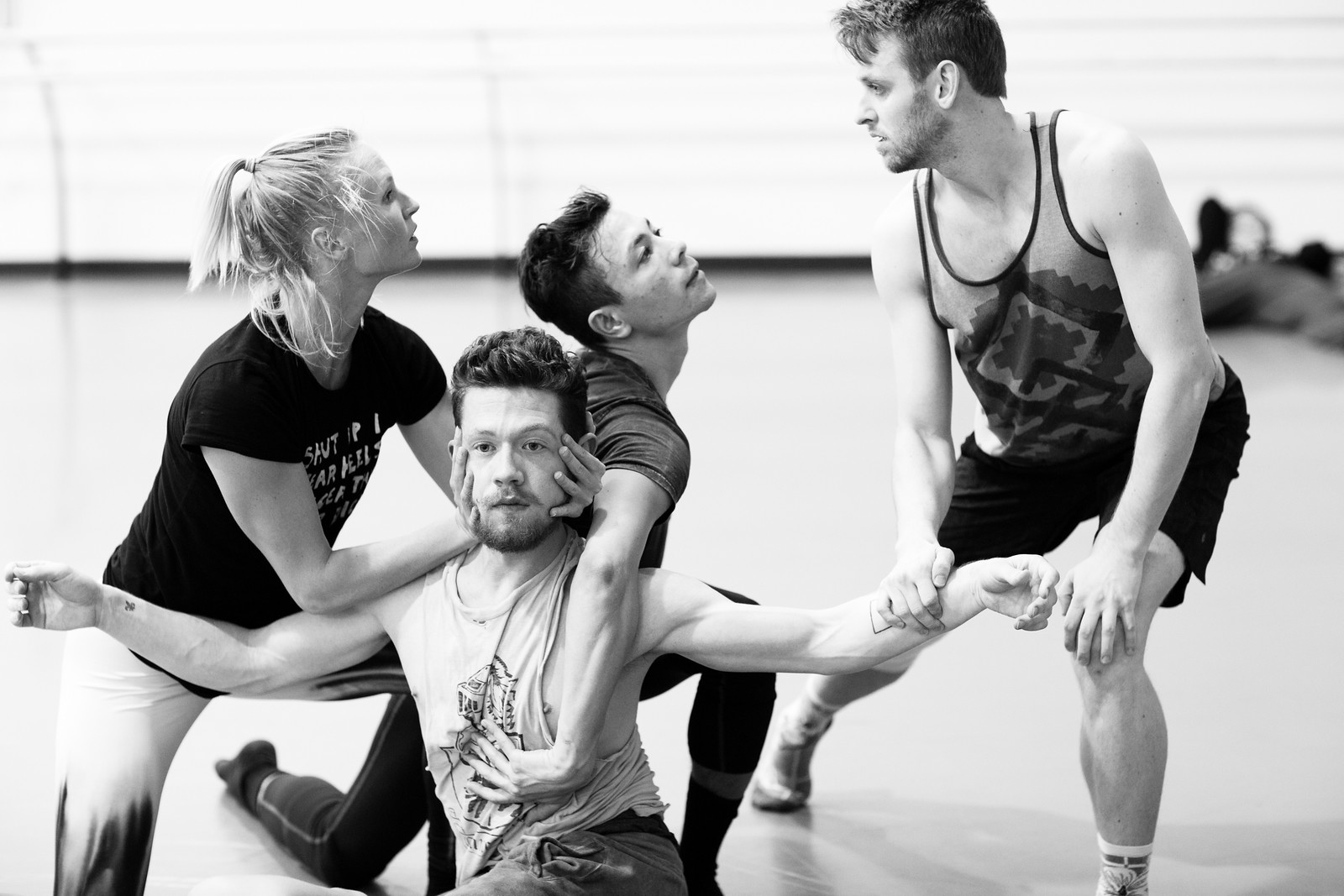 “My work has a variety of vocabularies,” Dominic remarks, and indeed his pieces exhibit a tremendous range of subject matter, style and production values, from his “more traditional or ballet-rooted” Romeo and Juliet, in which, however, he used opera singers and actors, as well as dancers—”The decision of whether each role should be danced, sung, or spoken depend 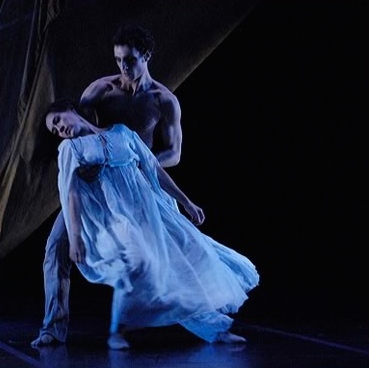 to the “incredibly two-dimensional and gestural” Titus Andronicus… 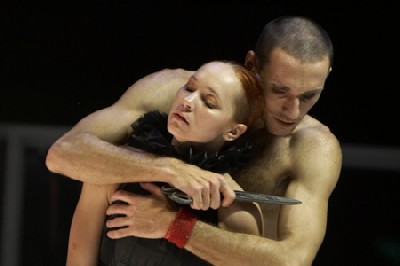 to the “big, rounded physical movements” of his “mostly comedic” Sleeping Beauty. 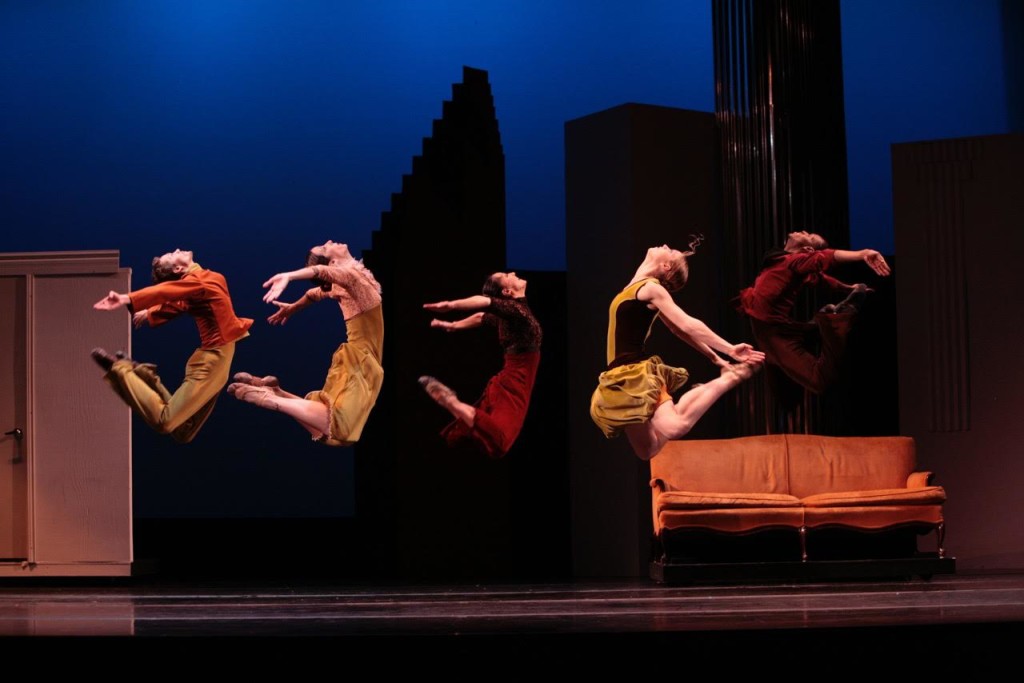 “Some ballets are very narrative,” says Dominic, “then some are what I call ‘abstract narrative’—sort of what I’m doing here,” with Whim W’Him. The way he goes about creating varies widely too. “Design elements—I could start there,” he says, “from an Image of light or design or costumes or dancer or vocabulary. There are 20 possible scenarios” of what might come first. “I try to get to know the tool—research the company and dancers.” For his first Whim W’Him work, to premiere January 22-30, 2016,* music shaped it initially. “Whim W’Him is a small group of dancers and unique ones to begin with,” Dominic continues. This piece is growing out of the “quality of the dancers and the music. Design will come later.” 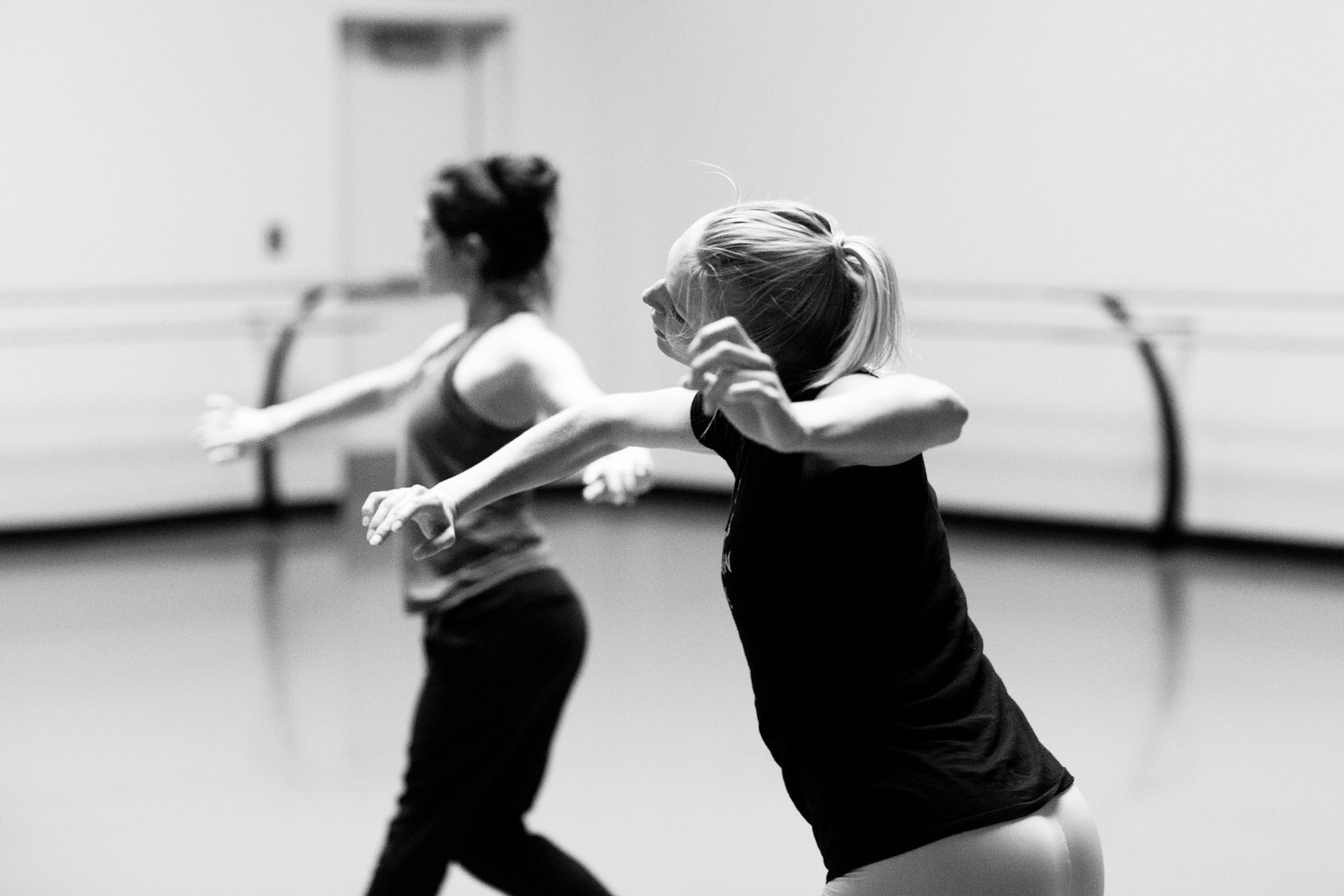 On the first day, he says he came into the studio with “a bit in my mind—a short phrase of a duet and short phrase of a solo.” He watched the dancers “for how they think, where their intentions and thoughts are, when they move, what motivates and challenges them. It’s very important, what language they speak.” Then he added onto the basic phrases. “And we develop a collective vocabulary for this music.” 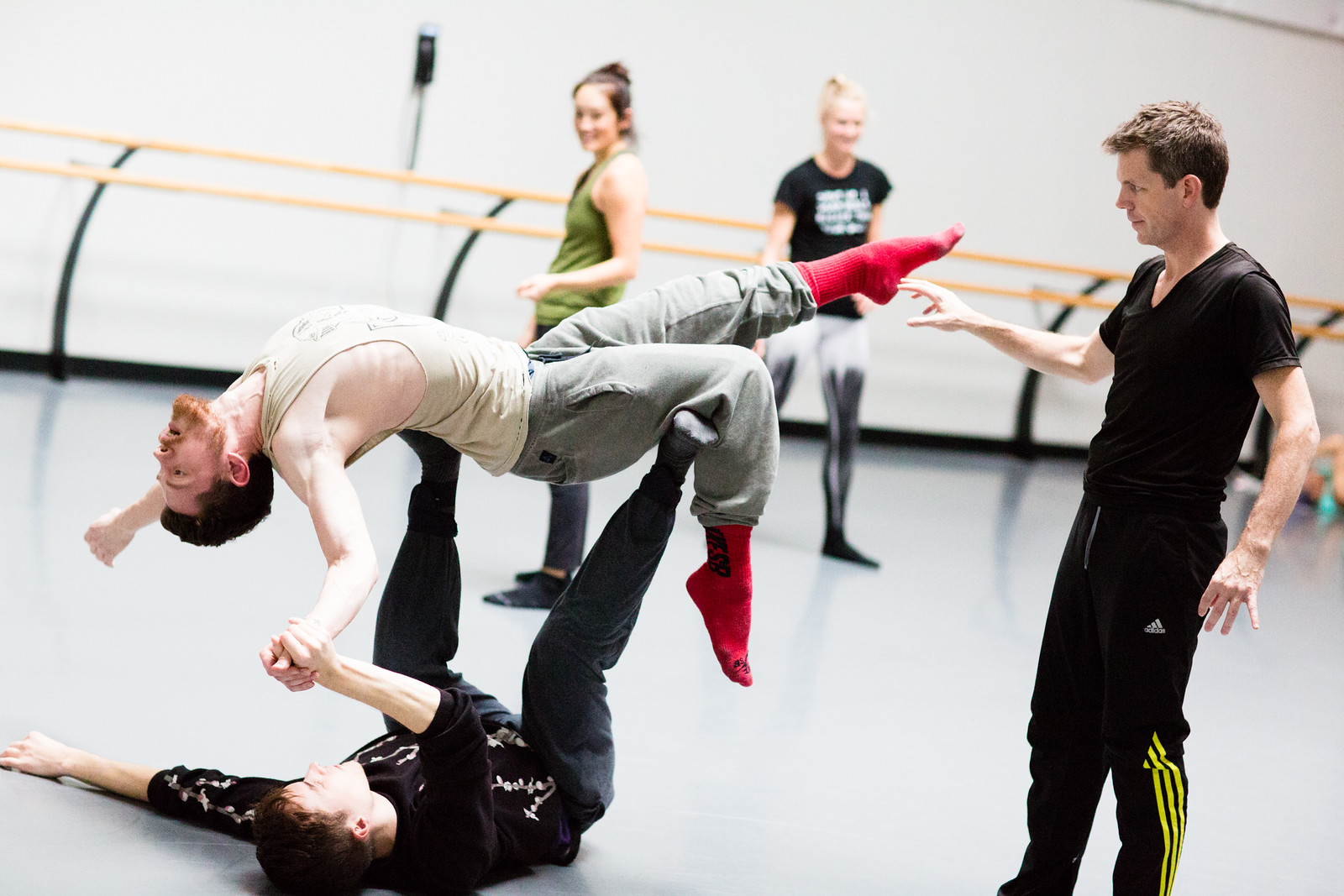 The music is by Two Star Symphony a highly unusual Houston-based group. 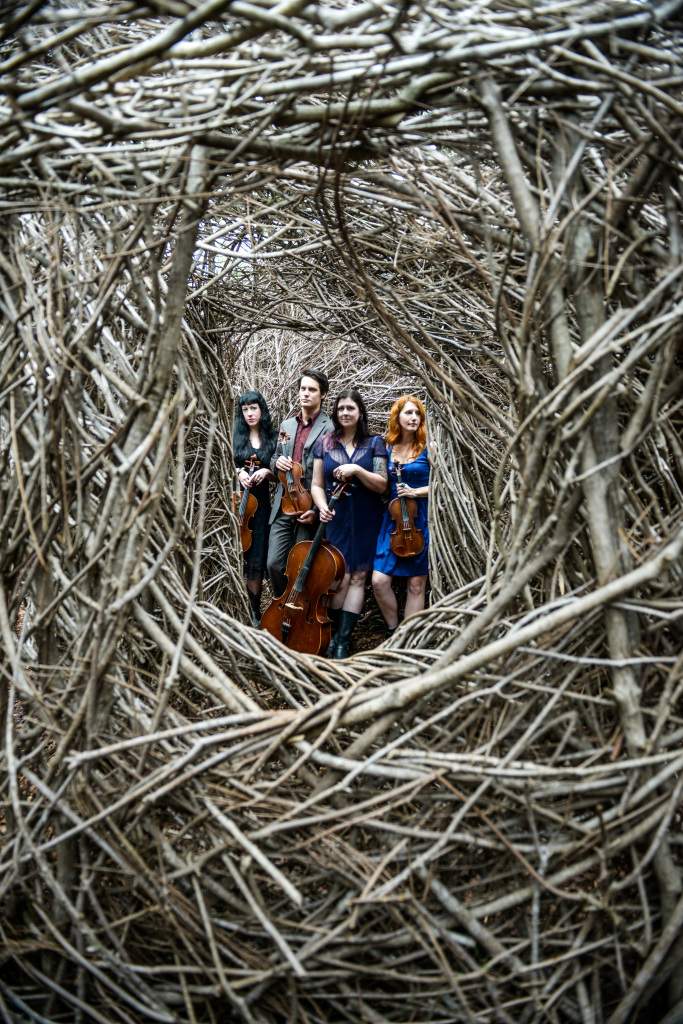 As their website notes: “Composing and performing all-original music in quartet and octet configurations, Two Star brings modern instrumental music to a wide range of audiences, from classical music enthusiasts to first time listeners. Two Star Symphony’s dark, distinctive sound is a result of the writing style they employ and the instruments on which they perform. The band works differently than most classical ensembles in that every member is also a composer. Songs are written and arranged live as a group, with each player responsible for his or her own parts. By the time the songs are finished, the music is memorized. Two Star does not create or use sheet music, so the player is free to focus on the other members and overall sound of the piece.” 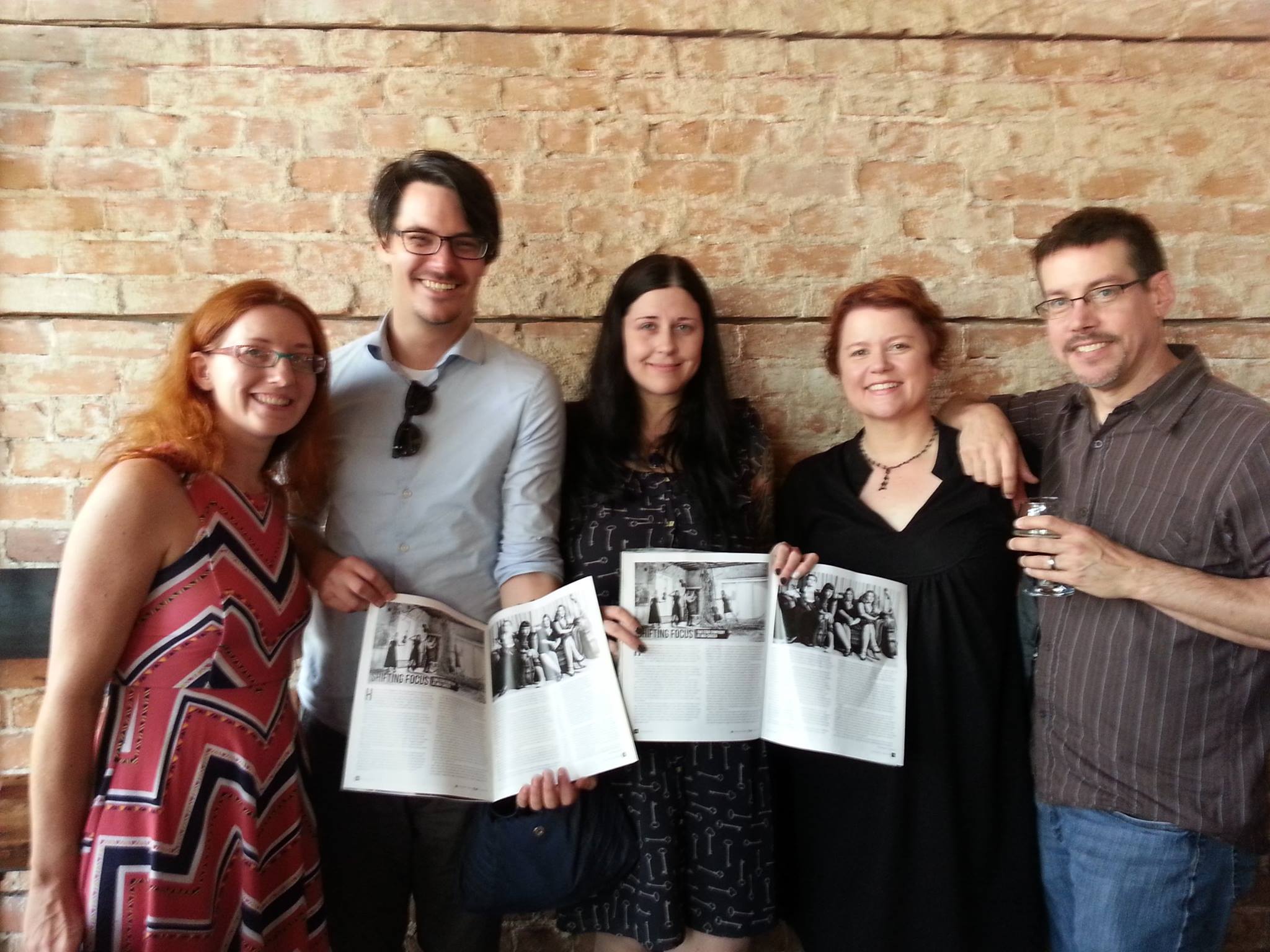 The music for the new Whim W’Him piece is written for this ballet by Two Star, who will be here in Seattle to play for all the performances. “When I told them about the project they started composing,” notes Dominic. It’s a quintet (basic string quartet plus a percussionist on all sorts of other instruments, including an accordion) entitled The Ghost Behind Me, though the danced version has yet to be named. Dominic says he is trying to find the core, “to decipher the music, its character and narration and color. It’s very strong.” And very catchy. A striking characteristics of Two Star music is accessibility. This particular piece has a kind of “turn of the [last] century carnival” character and sometimes a slightly sinister feel. “I think,” he says, “the spirit of the sounds is strong and deep in personality and action.” 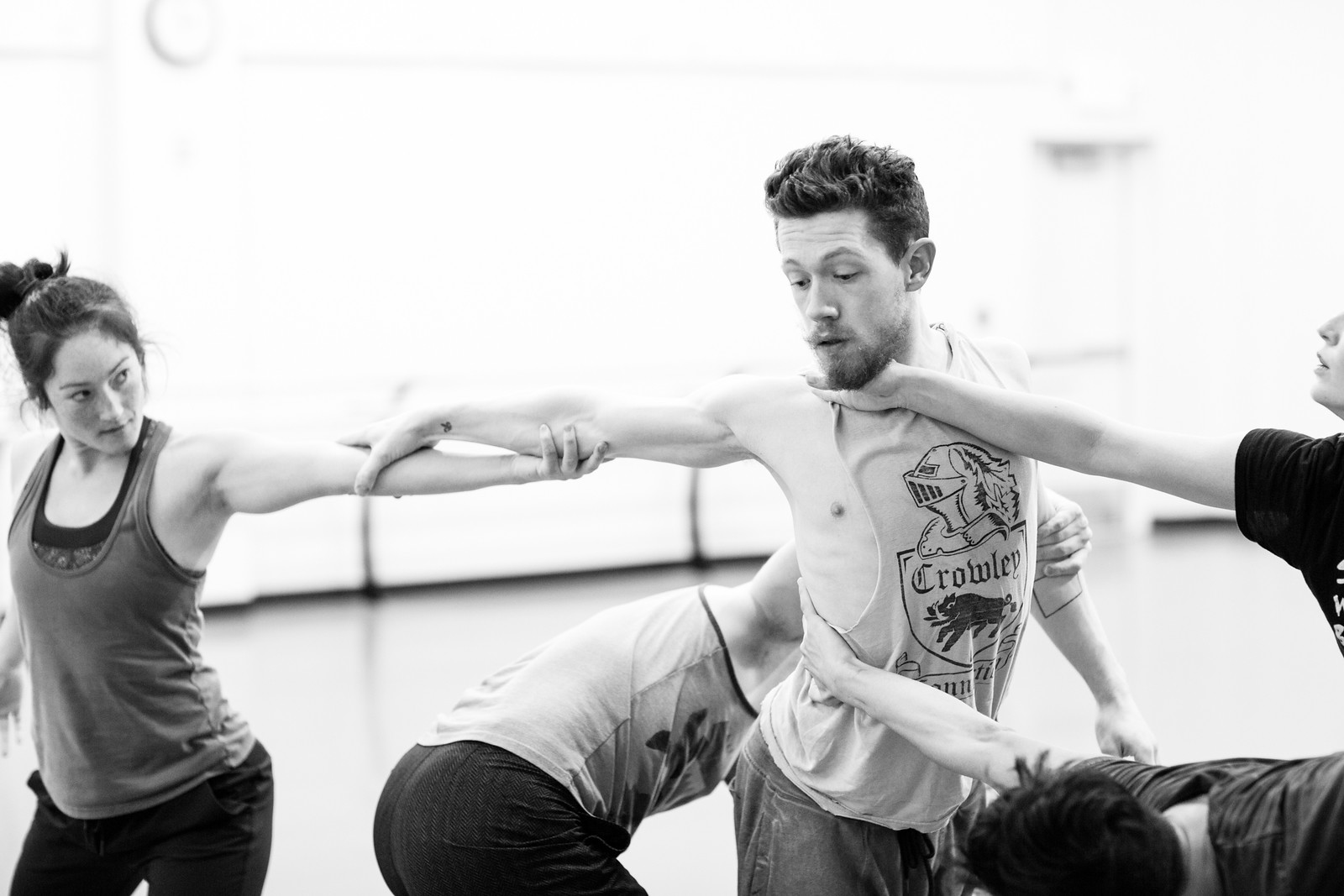 In the rehearsal hall, the dancers work hard to make clear the distinction in quality of movement between a strict  marching phrase and the wild flurry that interrupts it. They laugh as they try to move on counts 1, 4 and 5 in a 6-beat measure. Intent on picking up subtle gestures of hand or a turn of the head, their minds and bodies are fully engaged— until all of a sudden it’s time for a break. The dancers disperse for a few minutes. A warm smile lighting up his face, Dominic crosses to the side of the studio to where the baby sitter is holding his 8-month old daughter Viviana. Life for a single working dad.