In the almost-decade since Whim W’Him was founded, June 2017’s Approaching Ecstasy is the first evening-long production to be remounted. By no means a simple repeat, the show is being newly imagined in every scene, affording choreographer and Whim W’Him artistic director Olivier Wevers the opportunity to delve ever-deeper into the Constantine Cavafy poetry and the original music by Eric Banks of this complex collaborative enterprise. Only two of the original cast will be dancing in these performances, but it’s a very active process, involving far more than teaching old steps to a mostly new cast (5 of the 7 dancers).

For Olivier it has been a revelatory journey. “Looking at my five years path,” he says—from the premiere of AE in 2012 until now—“I can see how I was in a fog then, struggling to find an aesthetic, my own voice. I’ve grown a lot. I still struggle, but I jump into the middle of the fog now. I know how to get through. There’s more clarity in how to connect dancers, in how to handle transitions. That’s what I love about choreographing, the clarifying of the process.”

And Olivier is more attracted to theatricality at this point in his career, for heightening the intensity of experience in each section and in order to bring out and burnish the through line of the piece as a whole—though not in a simple beginning-exposition-conclusion sense. Approaching Ecstasy is complex. Musically/verbally it has an elaborate structure (more on the work of translator and composer Eric Banks in an upcoming post). It is comprised of 18 poems, sung by a 33-voice choir in Greek and in English. The choreography responds, in layers. The individual poems and their music are approached sometimes with straightforward story telling, often more abstractly. Throughout, images of hiddenness, masking and shouting-without-being-heard abound.

AE is also, in non-chronological form, a personal biography of Cavafy, detailing his life as a sensualist hidden inside his public position as a very proper Greek Alexandrian bureaucrat. There were many tensions in his spirit—between nightly abandon and daily secrecy, poetry and business, inner gay identity and uptight asexual appearance, his own sickness (he died of throat cancer, literally deprived of his voice) and the physical perfection of the loves he remembers or imagines. All these tensions imbue AE with a heartrending sense of the contrasted rapture and deep sadness of Cavafy’s life. 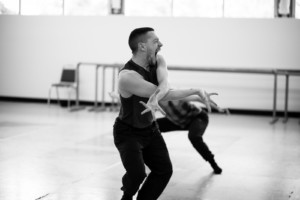 Structurally, dancing in the first version of this piece was restricted to the Greek sections, on the theory that the words would be better understood without the distraction of movement. But the result was a certain stasis and an episodic quality. The notion of exstasis is better served by the current fluidity of motion. Now, in only 3 of the poems does singing of the English stand alone without dance, allowing a fuller expression of the nuances of the poetry, without the necessity of a rigid system of stops and starts within each poem.

Another vital change is how Olivier has endowed the ‘plot’ or trajectory of this year’s AE with a clearer central theme and narrative arc, via the role originated by Kaori Nakamura and to be danced in this iteration by Tory Peil. In the first rendering of AE, a Seattle Times article from 2012 noted, Olivier saw Kaori as “the ethereal incarnation of love, ecstasy and memory,” or, in the words of dance writer Gigi Berardi, Kaori, “herself, play[ed] the ephemeral ecstatic state.” In the present incarnation, the role becomes less an occasional manifestation than an near-continuous presence, binding together the 18 poetic vignettes as a muse who both beleaguers and inspires the poet. 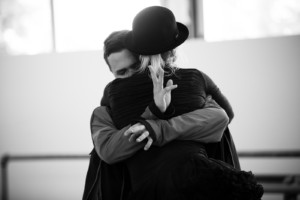 Posts coming up in the weeks before opening night (June 2):