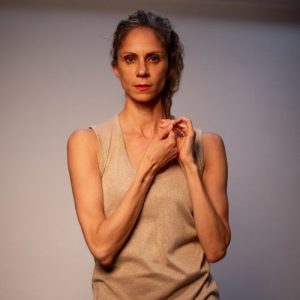 In 2015 Maurya Kerr created into the wide welcome, as one of Whim W’Him‘s first Choreographic Shindig pieces, where the dancers choose the makers of what they will dance. She is back this spring as part of the regular season.* Maurya has a long history of questioning: of conventional opinion, her own earlier attitudes (as a ballet dancer) toward dance, and of the inequalities and inequities of society toward women and, especially, people of color. In 2015 she was working on her Master’s thesis at Hollins University, focused, as has much of her work since, on how racism denies  black and brown people access to our human birthright of wonderment and on the ways it can be reclaimed. I was curious about how the last 7 years had played out for her, the directions she had taken, and in particular how the pandemic and the world’s greater awareness of issues with which she had been concerned for years has played out in her own preoccupations and work.

“Recently, I’ve been using the terms ‘racialized people’ or ‘the global majority’ for people of color—there’s a lot of controversy around POC and BIPOC,” she says, adding a bit acerbically, “I think what happened around George Floyd was a shock to everyone but the global majority.” As for herself, “I feel what’s happened to me personally, politically since then is the call, and perhaps the courage to be more outspoken.” With a serious smile, she asserts, “Yeah, I’ve not been allowing any racial shit.” In the past, she reflects, “It’s not that I did, but I think that before I tried to keep peace more,” and quotes from an article by Lisa Bowleg:

“Emancipate yourself from the business of keeping white people comfortable.”

“So I feel I have been doing that and trying to do that more,” Maurya notes. I remark that it can be hard, to which she replies: “Absolutely! It’s a call, and it’s work. But it’s work I feel I have the capacity to do.” Since before the time of the previous Whim W’Him piece, “My artistic work with my company tinypistol has been about Blackness, and really prioritizing the global majority, and making that the foci.”

When Whim W’Him artistic director Olivier Wevers asked Maurya about making a piece for the spring 2022 program, she says she was both “super-excited” and asked that her contract with Whim W’Him include stipulations of her own, namely: “For any commissioning work I do I am adding some racial equity guidelines. After looking at your website this morning I don’t think these will be a problem, but I want to clearly state them: 1) the racial composition of the company dancers must be a minimum of 25% BIPOC, with at least one Black dancer, and 2) any shared program my work is presented on must include a minimum of one other BIPOC choreographer.” The first is true in the case of Whim W’Him, as is the third, while there was a Black dancer who withdrew from the company for health reasons. So, as Maurya clarifies, “Olivier and I understand that there’s good faith.”

She continues, “I’m really also trying to use whatever platform and privilege I have to demand equity. I feel like Olivier is definitely acting as an ally. And there’s action behind what he says. Which I think for a lot of people and companies is not true. I think it’s so easy to get into ‘woke speech’ and ‘virtue signaling’ and all of that.”

And how about making this new piece? How has that process gone? Maurya says that normally every time she creates a new work, “even student works, I have a crisis of confidence. That’s just how it is. But this time I didn’t, which is really fascinating. There was no complete ‘I suck’ moment,” which she didn’t even realize it until back home after the end of the 2 rehearsal weeks. “Part of that, I think, is just time and age,” she conjectures. “And also realizing that all the work I do, and all artists do, is on a continuum. There’s no need and there can’t be the expectation every piece is brilliant. That said, I hope—I feel really good about what the dancers and I have created. I’m proud of it and excited about it, but I think having that different maturity around my own selfhood allowed this to be a little bit easier.”

She grins, “And we were so goofy—no, I’ll say I was goofy which encouraged everyone to be.” I had noticed that in rehearsal a very intense atmosphere was leavened by lots of smiles and laughter, and Maurya was clearly enjoying the conviviality. She says, “I think that it speaks to where I am and also the group of dancers Olivier has curated that we were able to kind of able to drop into it—that we were game for joy.”

Nicely charged atmosphere. Intensity but also laughter. A studio of people fully committed. No one was waiting for a single moment for something to happen. They made it happen.

“There can be a sort of authoritarian intensity which I’m not interested in cultivating,” Maurya qualifies, “but I do feel like hopefully my job, my duty, my privilege is to come in and charge spaces with agency, that as much agency as I have, they have. Again, within that, I’m still the boss. But I’m trying to create situations where people can engage—can fall in love, where the kind of creation I want to participate in can happen, both for the dancers and the person at the head of the room.” 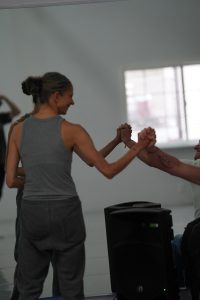 On how she approached this new work, Maurya reflects: “I came in wanting to use improvisational practices more. I’m not technically ‘trained’ in improvisation, but I love teaching it. So I focused on that for the first couple of days with the dancers. It’s also an amazing way to get to understand how they move, how they think. [None of the Whim dancers is the same as when she created for the company in 2015.] It’s a great way to introduce myself to them and them to me—having that playfulness and imagination and permission to go! So, this is the first piece I’ve created that has improvisation at its core, meaning that every show’s going to be different.”

She pauses. “But it’s not  a free-for-all, it’s very structured, but within the structure, I’ve tried to give the dancers a ton of agency. I’m going to see the first two shows. I was just going to the opening but after it got created I thought, oh, my God, I’ve got to see the next night too, to see what they do! They’ve been making brilliant choices. I’m super-intrigued to see what it’s going to become. I think any work has the possibility to become more and more itself, but I feel that especially with improvisation as a key component, it’s going to become larger than itself, become more than it contains.”

As another aspect of Maurya’s work, I mentioned her groundedness, literally and figuratively. ‘I tend to like that because it’s the antithesis of my body and natural way of moving, so I’m super-intrigued by it,” she says. “It’s not my familiar.” She smiled when I recalled Olivier asserting, over a decade ago when Whim W’Him was just beginning, that he wanted to do much more with the floor. Instead of always escaping from it, recognizing it, I imagine, as the place you are.

Finally, I ask Maurya about the title of her piece. “It’s called Rosas,*” she says, but declines to offer any explanation for the title. And as to its themes or central ideas, she concludes enigmatically, “I’m working with ideas of absence and intense presence—and I think I’m going to leave it that vague. There’s a lot of listening that’s required of the dancers—to each other, to their own imaginations, to their own instincts.” And doubtless of the audience as well.

*For Rosas, Maurya has commissioned a score featuring cello, piano, voice among other sounds, from Jaren Feeley, a Bay Area composer. The music, as she says, “is haunting. It’s turned out quite beautifully.”

VASHON CENTER
FOR THE ARTS

WHIDBEY ISLAND
CENTER FOR THE ARTS