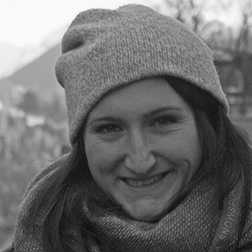 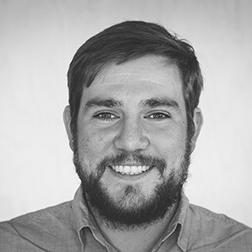 …are the people behind RSVR Visual Research. The name, a condensing of ‘reservoir,’ they told me, “describes our interdisciplinary studio environment and our approach to project work. We champion collaboration; this dialogue between the artist and the community provides richness. Our core team consists of architects, artists, and craftsmen. Our varied but complementary skill sets, allow us to: methodically analyze the latent qualities of place and site (this include history, climate, light quality, spatial quality, community, culture, etc.), to generate a conceptual response.” Ian and Hayley have been working together since 2011, generally doing installation pieces with the emphasis on lighting. Their collaboration with Whim W’Him artistic director Olivier Wevers on Blind Spot for the XPRESS program (still with two performances to go, tonight, Friday, Jan 24, 2020, and Saturday, Jan 25, at the Cornish Playhouse) is their first performance piece. 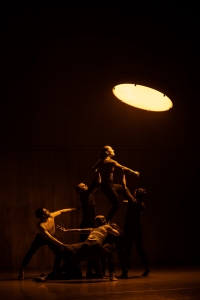 Hayley and Ian were trained as architects. She is still one for her day job, while he works in environmental graphic design, making art pieces for a wide variety of clients. Both are particularly drawn to the emotional in design as well as to its functionality, which is where the light comes in. The quality of light is fascinating to them, and they gravitated toward lighting projects from more sculptural ones they had done in the beginning. “Spatial experiences,” they say, “can be physical or through light in space. Light becomes a tool for defining volume, for creating something else.” Not as an illusion, but a thing in itself. They prefer to think of light less as the means of producing an object—like neon—but as a creator. Light is ephemeral and has an affinity to time-specific events or installations. Natural light or lack thereof is important as well, and they depend on it in some of their works, which sometimes can be seen best in places with lots of light.

RSVR’s creators do about 3 projects a year. They are selective in what they undertake. Sometimes it might be simply (or not so simply) a thought exercise. “We might propose something to a biologist, say. It may or may not come to physical fruition.” Particularly enjoyable projects from which they’ve also learned a lot include: 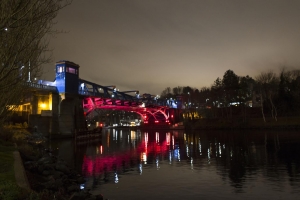 …which started at University Bridge, when they set up their studio as artists in residence in the bridge tower office in 2016. This project included a public engagement and element collaboration with the Seattle Department of Arts and Culture and the Washington Department of Transportation.

They continued with the Fremont Bridge lighting, originally installed Jan 2018 for a short kickoff period or inaugural phase. Then, the city asked to study effect of reflected light on salmon population—the first study of its kind, which is still in progress. Ian and Hayley are hoping that in 2020 Fremont bridge lights will turn on permanently.

The third bridge is Ballard, which will come into being “eventually, as city has appetite for it.” RSVR created design guidelines for all three phases which, Ian and Hayley say, “could be put into effect by us or other commissioned artists.” 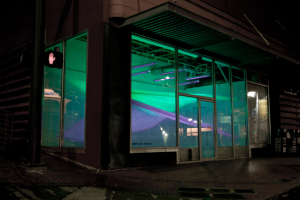 Spaceworks Tacoma is a not-for-profit group that fills unused storefronts with art. In 2011 or -12, RSVR did a small project in an old Woolworth’s. It was a small storefront, with a long, skinny interior space. Ian and Hayley dipped 3000 individual strings in highlighter fluid to create two UV-reactive planes of light. All in the spirit, as they put it, of “giving a bit of energy to downtown Tacoma,” which as they also note, has changed a lot since then. 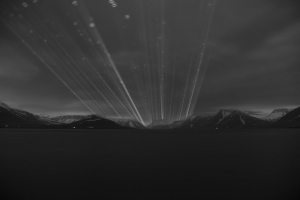 …has been re-created by now several places in the US (Oregon and Utah among others) as well as in Iceland. The idea is to introduce new phenomena to natural landscapes. The first version was done with the cooperation of the National Park Service, in the North Cascades National Park. From a single point, using a laser, they create what appears to be a light curtain from peak to peak. The drawing, installing for each of these projects is only possible at a single time and place.

So how did Hayley and Ian connect with Olivier? One evening last August in Volunteer Park he saw a piece of theirs at the Lusio Lights Festival (“A free, family-friendly, inviting evening of light, art, and sound, featuring more than 30 light installations spread throughout the park”).  used a mono-frequency lamp, a yellow light that they affectionately call Spot, in their Lusio installation (that went by the same name). For the myriad variations of color in a scene to be visible to us, light of the full spectrum needs to be reflected. Spot has a very small spectrum it picks up, which has the effect of removing most of the color. With all the colors but yellow leached away, what you saw was trees and ground and the people and objects wandering about in a neutral, grayscale tone. “It was a sort of ad hoc experiment with the oddity of colorless space.” What do people experience? In fact, not everyone even noted what was different. 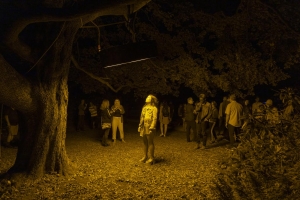 But Olivier—in the midst of envisioning a piece about empathy, about how surface appearances color and distort our view of others (both literally and figuratively)—came by that evening and was greatly intrigued. Spot seemed a perfect visual metaphor for his newest creation. He contacted RSVR, wanting more information and raising the possibility of a collaboration. When Olivier came to them, he told them the backstories of his piece. They talked about empathy and the different lenses and frameworks through which it could be viewed. And the Spot installation became the prototype for Olivier’s Blind Spot in the current XPRESS progam. 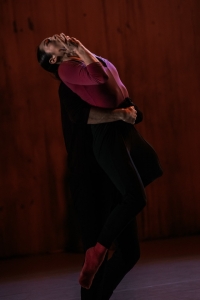 The creators at RSVR thrive on getting to know arts in different ways. They have worked with designers, architects, engineers and scientists, but this first time with dance was a new experience. “In dance esp, multiple things are happening at once, light, choreography, audio. There are rich moments, and you can’t typically script them.” One of the interesting aspects of turning an outside in the ordinary world installation into a theater piece, is that instead of it being something you can walk right by or through, with or without engaging, in a theater the light all the other elements are set in front of the audience members who sit in their seats for the express purpose of observing it. 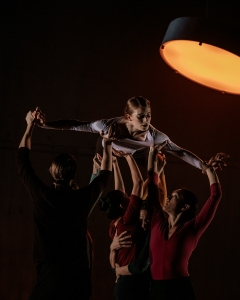 Spot, the light itself, is “a bit personified, an extra performer doing its own little clumsy dance.” Like dancers, Spot takes some time to warm up, so its effects only become felt as the piece progresses. In the beginning, the dancers are in distinct colors (bright tops and matching socks), as they struggle to connect or are repulsed by exterior cues. 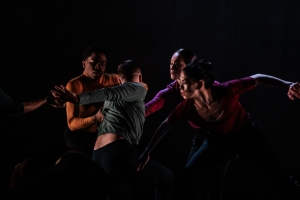 As time goes on, however, the obvious surface characteristics are not so visible anymore. By degrees, all other lights fade from the stage leaving plain humanity, a single species under a singular light. 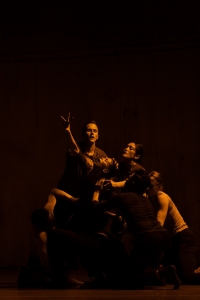 Yet all the dancers are still recognizable in their unique ways of moving or acting. By removing much of what divides us from each other, a space is made in which individuals can relate to each other on a true and basic human level. 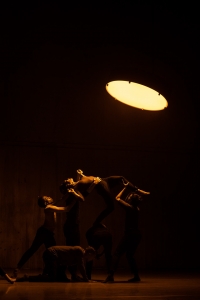