Lauren Edson at work is nimble, flexible, quick, buoyant and precise. She says she’s honored to be one of the three chosen by the dancers to make a new piece for Whim W’Him’s second Choreographic Shindig, not having realized there were over 100 entries in the competition. The proposal she submitted to the competition was—as often seems true with Shindig choreographers so far—very different from what she is actually creating. In fact, “I’m not sure I can recall it…” she says, then, “Grimm fairy tales. Little Red Riding Hood, a narrative that could be dissected.” That idea of starting from a known story and investigating it, though, has remained. Lauren was already creating so much on her own company that she hadn’t yet done much prep before she got to Seattle. But in any case, she notes, “I like to meet the dancers first.” 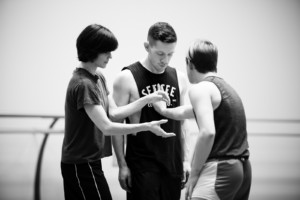 Ferdinand the Bull, the Walt Disney version filmed in 1938, gave Lauren an idea for her current Whim piece. “I had remembered seeing it a long time ago, when I was very young and loved the story, its sweetness. It’s a rough background to what I’m doing now. Ferdinand is manifested in the person of Pat

She says, “The dancers move in herds, ritualistic, working together for some end,  exploring how the individual emerges and what that does to the person’s psyche—moving in and out.”

In the first rehearsal, Lauren gives tasks to the dancers, such as replicating the way of walking of the person in front in a moving circle. The exercise encourages meticulous observation and thought about intention and involves an intriguing chain reaction, where everyone focuses on something that is in the process of turning into something else.

“Use that walk as a motivation.”
“Did you get a look at how the person behind you interprets your walk?”

After working on these exercises, and others, Lauren sees what they’ve come up with and takes something from it—“What was it you did that’s kind of like this…?” She doesn’t video anything at this stage. “I try to recall from memory and go with my instinct.”

The atmosphere in the studio is concentrated but good-natured, despite the sheer volume of movement presented. During the first week a large amount of material was created, “to the point where a lot of the dancers were overwhelmed.” At one point Patrick says, “I’m just figuring out how to do it in my body,” preferring that she not to add anything yet until he’s digested it all. Lauren listens. She strongly wants the dancers to enjoy the process, noting “the smallness of the time on stage” compared to the whole process of creation.

Contemporary dance is often intentionally heavy, grounded, literally, rooted in the floor, pulled down by gravity, exploring the ground. In Lauren’s new piece the direction of flow is, as she says, “Up.” Some movement does take place on the floor, to be sure, but the general feeling is up. Levity, though not in the sense of frivolity. Lightness, without being lightweight. It’s a treat to watch the way she demonstrates, repeatedly dropping onto bent knees then instantly bouncing onto feet. And the dancers gamely follow her lead.

“More of that self-exactness,” she exhorts.
“Find that balance driven with that really articulated carving out.”
“A little more arch in the spin.”
She does a wild-armed windmill with splaying fingers.
Something called “the grandpa walk” becomes part of the work’s vocabulary. There’s a section called “dance party,” and the essential quality of one little instant is “feel like a meerkat here.” 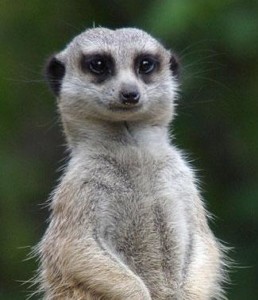 When I comment later about the precision and articulation of the movements in her piece, she says, “I love the vocabulary of intricate detail, so it’s swept in a way you don’t see coming.”

In a later conversation, we talk about the question of program notes or what to say about a piece beforehand or in program. I was thinking earlier, watching rehearsals, about what I picked up on without any verbal clue about themes or plot lines. It seemed that intriguing as that experience was, I like knowing something about what is underlying it, a clue—here are such infinite possibilities. At first, says Lauren, “I used to be opposed to program notes. But now I’ve changed somewhat.” I can see that it might heighten an experience, both pleasure and understanding, to have some sort of window. I want people to come to their own conclusions about a piece, I want it to resonate. However, it’s good to have a small glimpse into the inner workings. Music, titles, costumes, notes—all can provide that glimpse in.”