Engaging, passionate and full of ideas, Micaela Taylor has been dancing “since I was very very young. My mom saw I had talent and saw I had rhythm and put me in dance classes.” By twelve, she had decided that dance was what she wanted to do with her life. 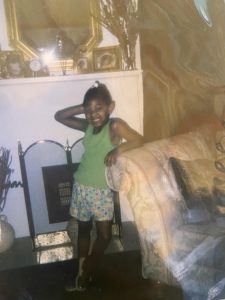 Micaela had started out with hip-hop classes. When, at around 12 she first got exposed to ballet, she saw its importance, how its discipline and strengthening of the core could help her with other kinds of dance. “I wasn’t thinking of stage or concert dance, but I saw what it could do,” she says. That was when she enrolled in a Russian ballet school (Marat Daukayev School of Ballet) and left hip-hop, although it never left her. Each of the forms of dance she has learned and practiced “has expanded my ability as a mover.” 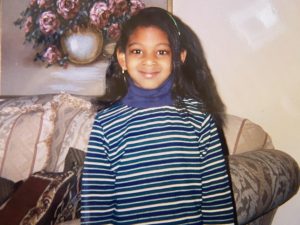 After graduating from the Los Angeles County High School of the Arts, Micaela moved up to Seattle to attend Cornish College of the Arts, from which she got her BA in 2014. On returning to LA, she joined Ate9, Danielle Agami‘s company, based on Gaga, the technique of Israeli choreographer Ohad Naharin. (Danielle’s piece, Duck Sitting, was premiered by Whim W’Him in June 2018.) It is hardly surprising that for Micaela’s approach to dance, “There are a lot of streams flowing in,” as she puts it, although the results are often quite unexpected. Having dismissed choreography as something she might possibly do way off in the future, Micaela finished college intending just to dance. But in learning and performing the creations of different choreographers at Ate9 and BODYTRAFFIC, and inspired by what they brought to making dances, she found a need, a voice and a vocabulary to do so herself. 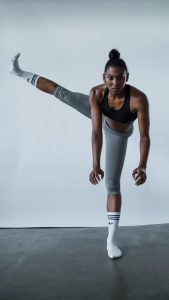 By 2016 Micaela had discovered her own unique qualities, had already formed her company The TL Collective, and was developing an approach she calls ‘expand practice,’ a form of “guided improv” which she describes as “expanding your body and your narrative, allowing others to expand yours. Like getting the wind swept out of you and then filled up again.” Or, as she said in a April 2018 Dance Magazine interview, “It comes from this idea that we are moving out from our core and using all the shapes we can make; this idea that it’s not one idea that we are after, and it is not one style of dance,” she says. “We are always expanding.”

“Even now,” she tells me, “I love connecting with people—with body and words. I love to hear people’s narratives—it’s really more important than the finished piece.” She has learned to cherish listening and putting into movement “the vulnerabilities express when people tell their stories.” 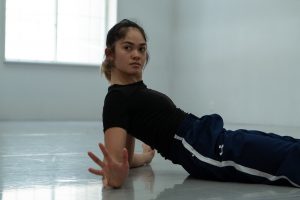 I asked Micaela what the upheavals of the past two years have done to and/or for her professional plans. She said, “my company was transitioning to another level. We had performed at Ford Theatres, and were getting ready for another opportunity for March 2020.” They had already danced at Jacob’s Pillow in Massachesetts the previous summer and had just been invited to perform at Royce at UCLA, “a big jump for the company, and I had signed with an agent.” She was also traveling and choreographing on her own as well. “So it was disappointing [when Covid shut everything down], but a bit of a sigh of relief too. Now I could regroup and figure out what really is next.”

During the lockdown, Micaela was far from idle. She taught virtually and worked with companies via Zoom. “I demonstrated a lot, not so much relying on words. I had to be much clearer because of the distance. It also pushed me to create with film.” She found out what her own company has experienced, as did Whim W’Him: “You grow from hurdles. Bigger steps over bigger hurdles. The effect was pressure to think about what this meant. It all pushed me to more research and thinking things over more. How were people I was working with affected?” In interviews on different pieces, there were “new sorts of conversations, and many more people saw my work, giving me the opportunity to share perspectives and hear others’.” I get the impression that Micaela is  intense and impulsive by nature with a tendency to jump right in to each new thing. The pandemic required her “to slow down, become more thoughtful, examine the process and relate more deeply with the experiences of others—and value clarity and transparency more than ever.”

In answer to a question about how she and WW got together Micaela replies, “As I stepped out as a choreographer in 2016, I was aware of Whim W’Him. Olivier [Wevers, artistic director] followed me too, and he reached out. So now it’s coming full circle for me. I always wanted to come back to create in Seattle and always wanted to work with Whim W’Him and Olivier. I’m honored to be here, honestly.” 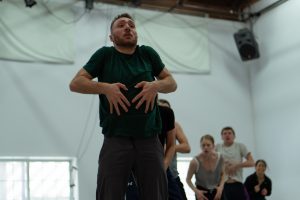 About her creative process, she says, “When I haven’t worked with a company before, I do know my own physicality. I need to think and be grounded and clear with it. I throw a whole lot at the dancers and see what they do with it. I don’t have a particular narrative with a new company. 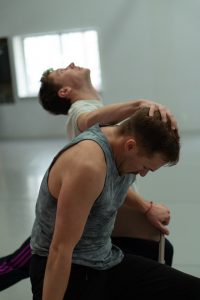 “But I knew a couple of the Whim W’Him dancers. Based on them I knew I could stretch and challenge and be athletic with them.” She adds with a grin, “and cause them to pant. And I like to be transparent, even with my own weaknesses or forgetfulness.” 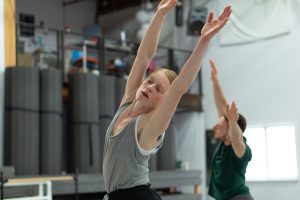 A lot of what is done in those first rehearsal days “stays and becomes part of the piece.” A kind of narrative did emerge with the Whim W’Him dancers. “In the process I saw a feeling of chaos, my goals not happening on the first and even second day. I knew what I wanted to see, but it didn’t happen.” And that—the recalcitrance and uncertainty of life, the continual necessity of facing the unexpected—became the driving force of the new piece, called leftseat. “I have an idea of how life is going to go, but it pans out differently. I want to go right—it goes left. There’s no particular answer, though, only agreeing that there’s always this pull or shift or interruption.” 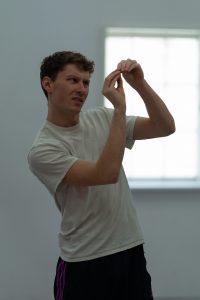 Micaela’s work is very physical, but facial expressions also figure very prominently. Long, smooth whole-body movements are often suspended—or completed—by abrupt stops and quick, highly articulated arm and hand gestures. It is very important for her that each dancer be fully invested in each instant and with their whole being; no slack moments nor unengaged body (or soul) parts here. 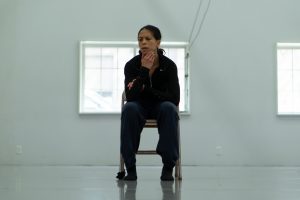 I asked Micaela about the role of a chair, often in the center of the action. “I noticed that sitting in the chair,” she replied, “people were calm—it was safety, security, home. But still they have awareness of what’s going on around. Chaos can still be there. You are never at peace even if you’re home.” 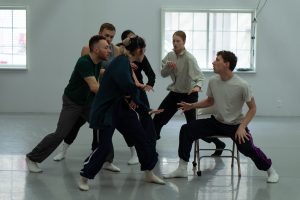 Interspersing the solos, duets and trios are a good many unison passages. “I love unison,” says Micaela. “I like to play with different characters in one voice. Super-together and their own selves, in their human connection—emotion, experiences. [Unison] is a symbol of being individual together and growing until separate voices eventually become one.” 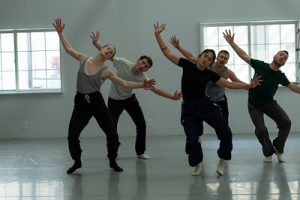