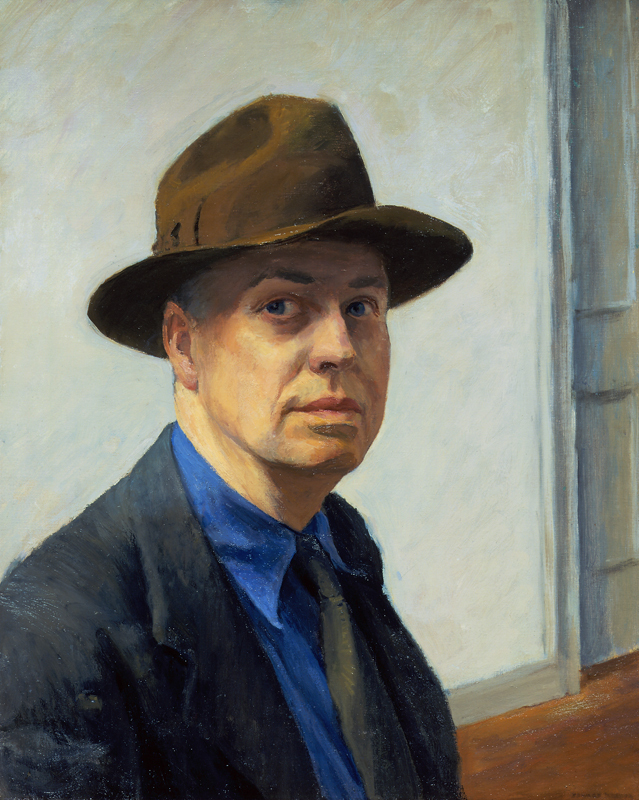 “Keep it not collective,” says Penny Saunders to the seven dancers moving in unison. They are working on a new piece called Soir Bleu, which takes its themes from the life and paintings of mid-twentieth century American painter Edward Hopper. The facial expressions and body language of his subjects, habitually depicted alone, in pairs or in small groups, are impassive, affectless, remote.

The images, colors and line are stark. Jessica Murphy of the Metropolitan Museum of Art’s Department of Modern and Contemporary Art describes Hopper’s style: “Clearly outlined forms in strongly defined lighting, a cropped composition with an almost ‘cinematic’ viewpoint, and a mood of eerie stillness.” At first blush, these immobile, nearly static moments seem an odd choice for a dance work. But, as Penny said recently in one of our conversations, “Something, was happening in his characters’ heads. What led up to it or came after?” Such questions inspire Soir Bleu. Still, she says, “It’s a challenge, as choreographer, to keep it dynamic, not to be drab—to change the scene as often as possible,” but without becoming too episodic. 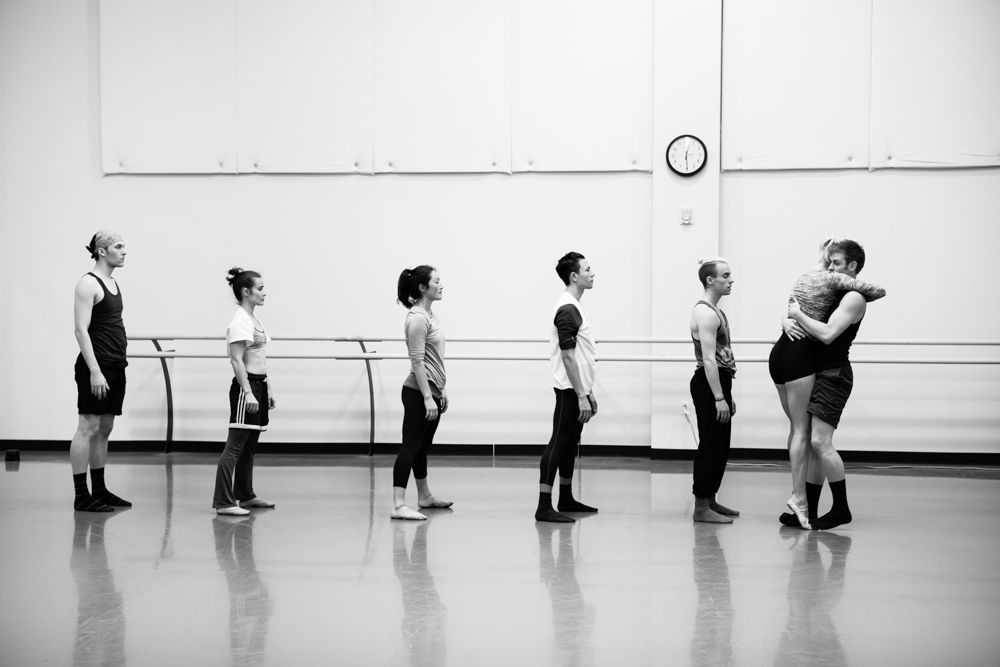 To capture these elusive qualities and tensions, Penny uses changes in movement, in groupings, in tempo. The dancers mingle or cross paths, with or without noticing each other. Figures sometimes even intertwine, but they do not bond. As in the painting Nighthawks, gazes fail to meet; each individual is lost in a private world. 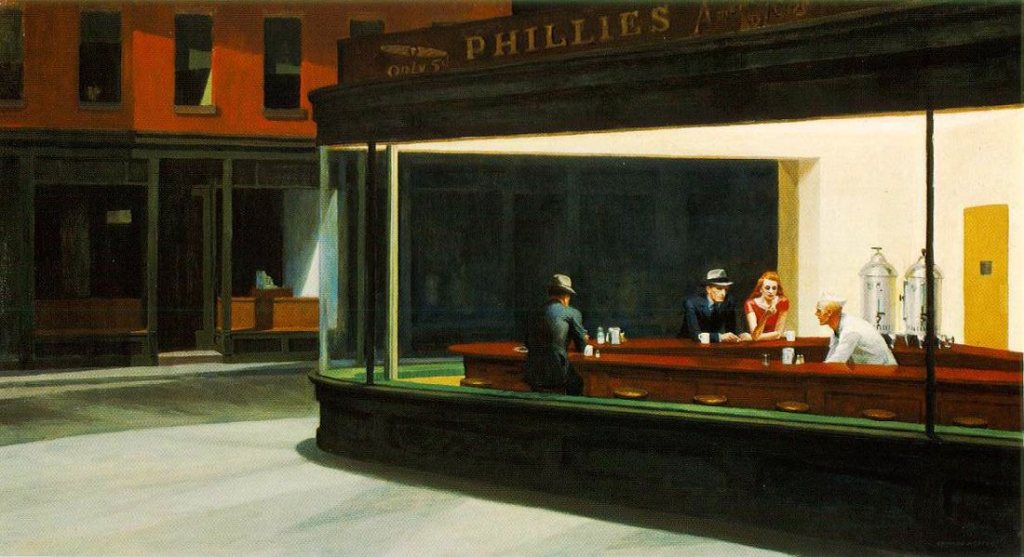 Hopper was fascinated by architecture. Some kind architectural element, a window or portal, frames many of his paintings, and a window and curtain figure in the scenic design of Soir bleu. Justin Reiter dances against a semi-reflective wall, less from narcissism than out of a kind of yearning, for a twin, an alter ego—or himself. 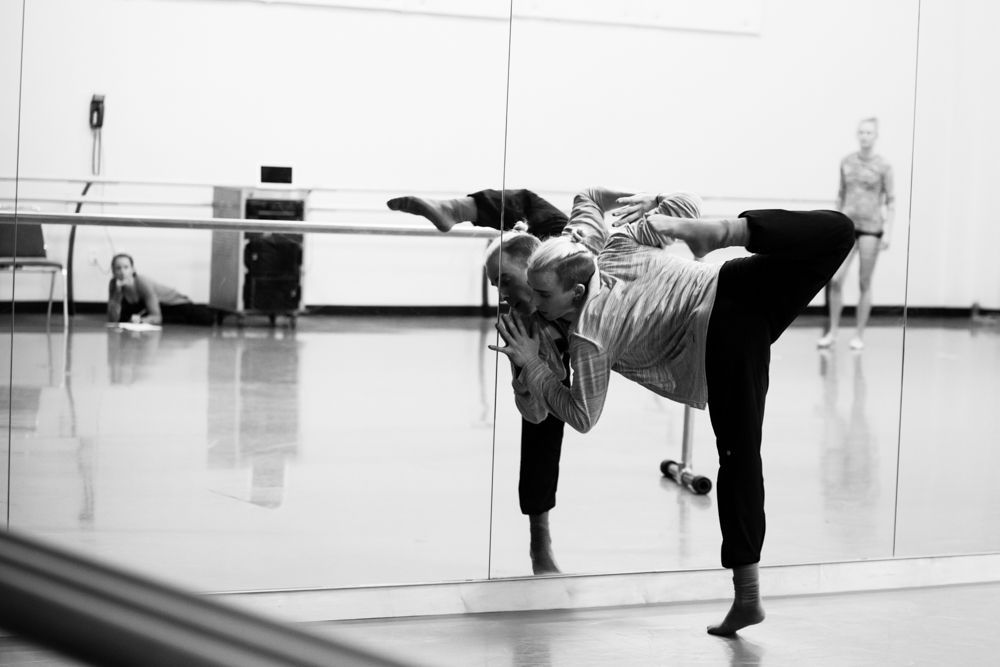 Often in Hopper paintings, the setting is urban, the light strong, but the subject somehow unreached by it. 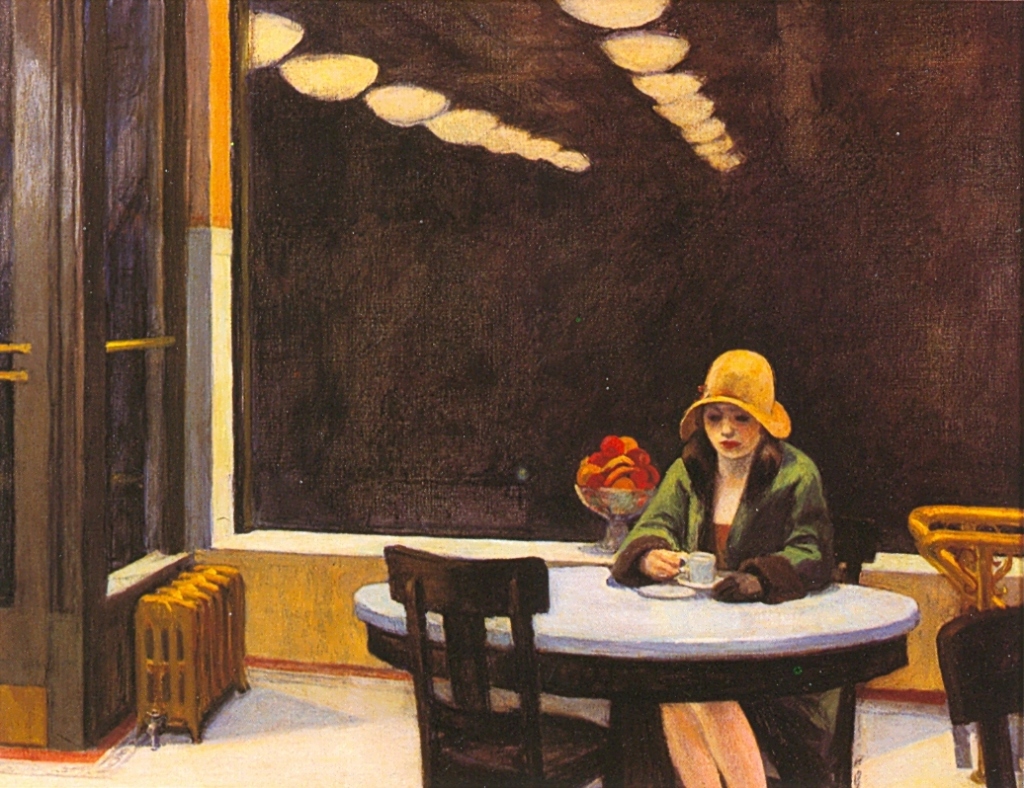 Mia Monteabaro‘s  poignant solo, against a wall, evokes the sense of a woman alone. 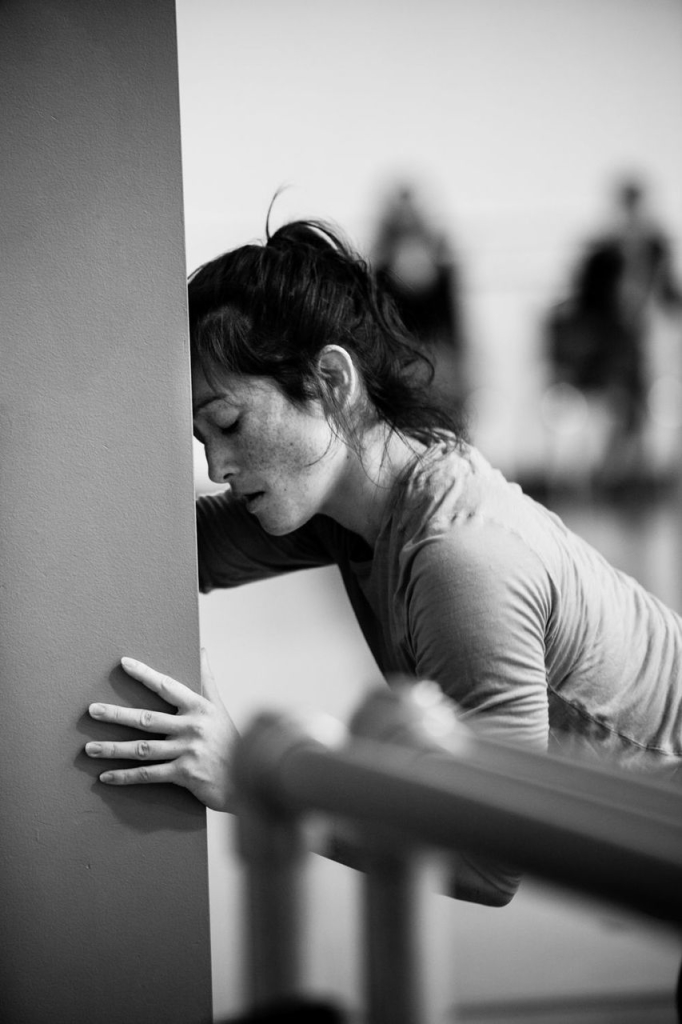 Hopper’s lone subjects were often inspired by people he noticed while traveling or by fleeting of rooms glimpsed from trains. 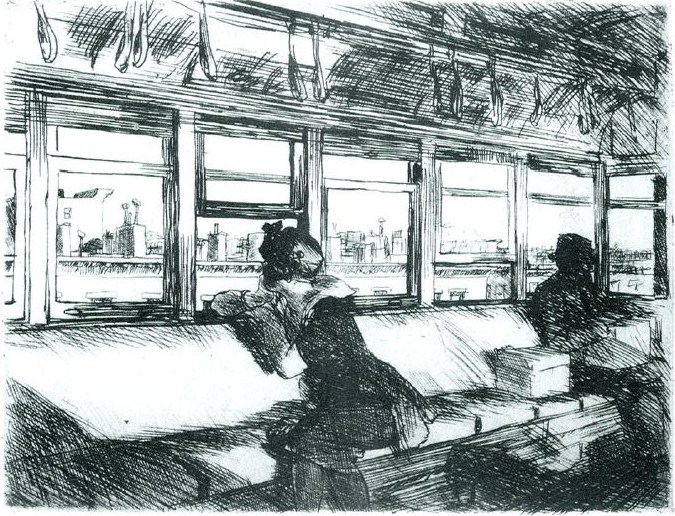 A trio of Lara Seefeldt, Mia, and Tory Peil is danced in isolation, echoing all those paintings of solitary females. 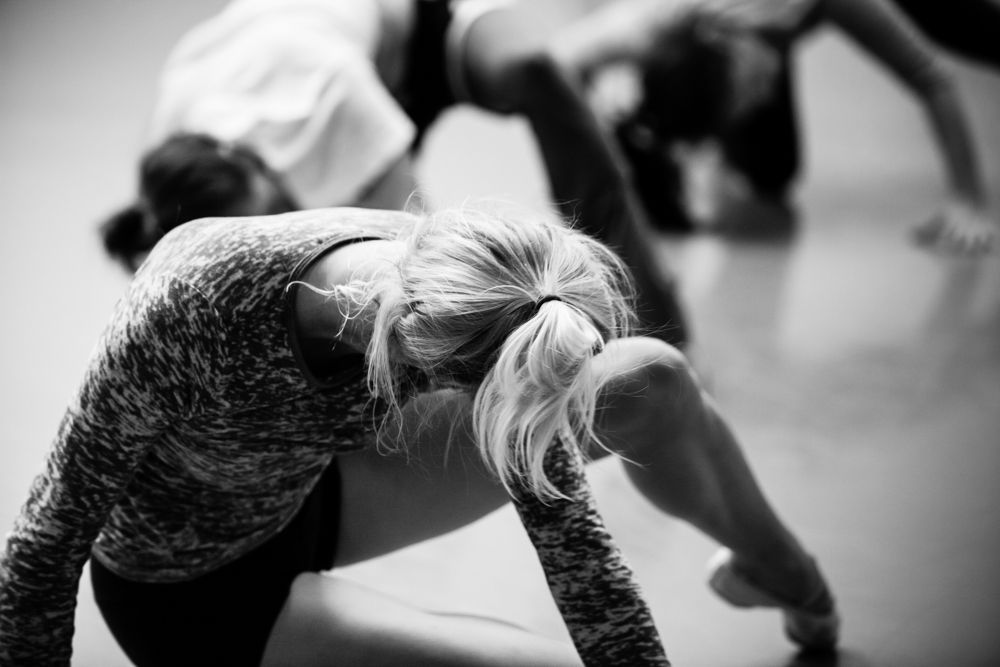 The three women occupy a contiguous physical space and propel their bodies through identical motions, but their psyches inhabit different continents. 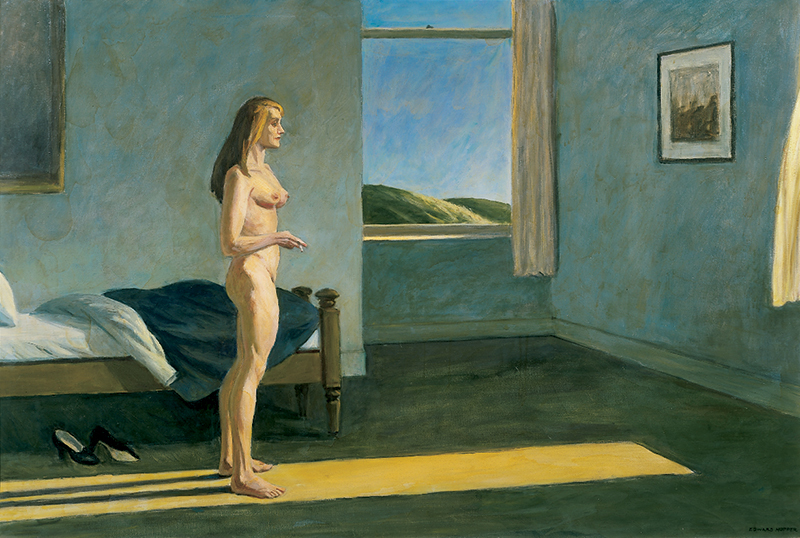 Even a young couple, standing side by side in what some other painter might portray as a romantic moment, seem troubled, brooding, disunited… 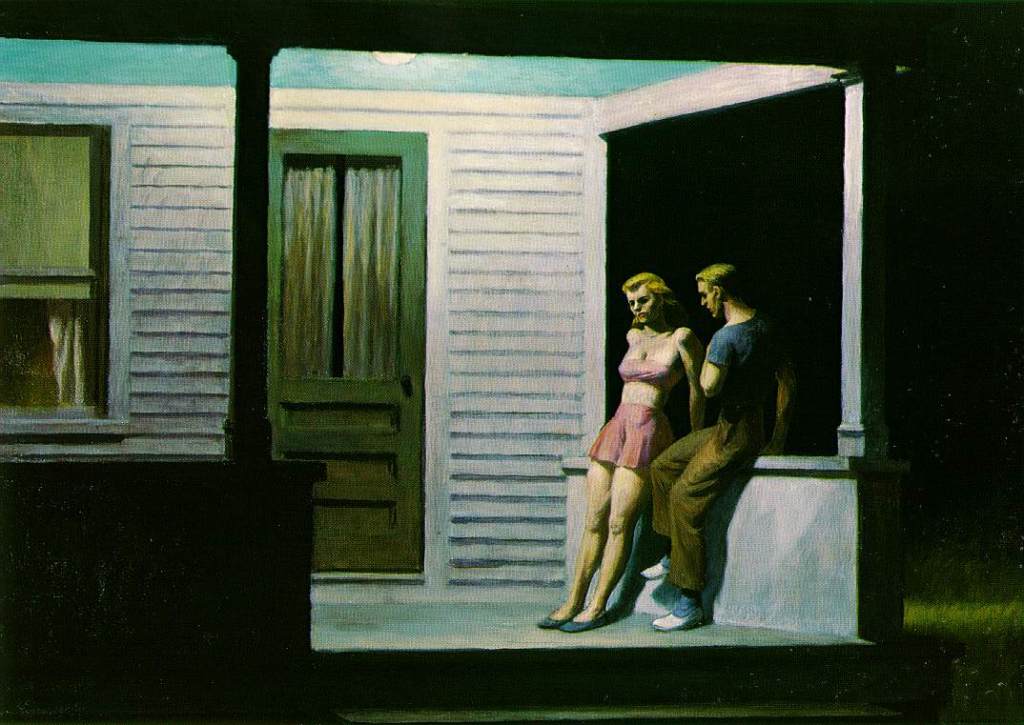 …as if their togetherness is an accident of sheer propinquity, unlikely to last. Thomas Phelan and Tory Peil call up their disconnected connections. 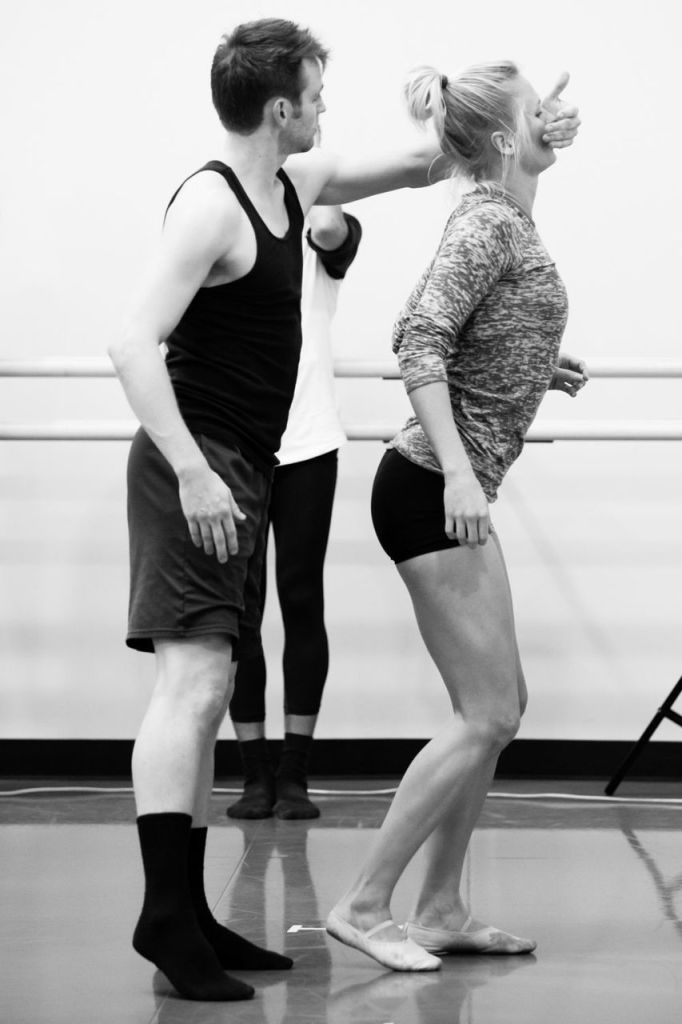 Winding through these disconnected scenes is a long-joined but ill-suited couple, Edward Hopper himself and his wife Josephine (Jo—who posed for the women in most of his paintings), represented in Soir Bleu by Kyle Johnson and Lara. 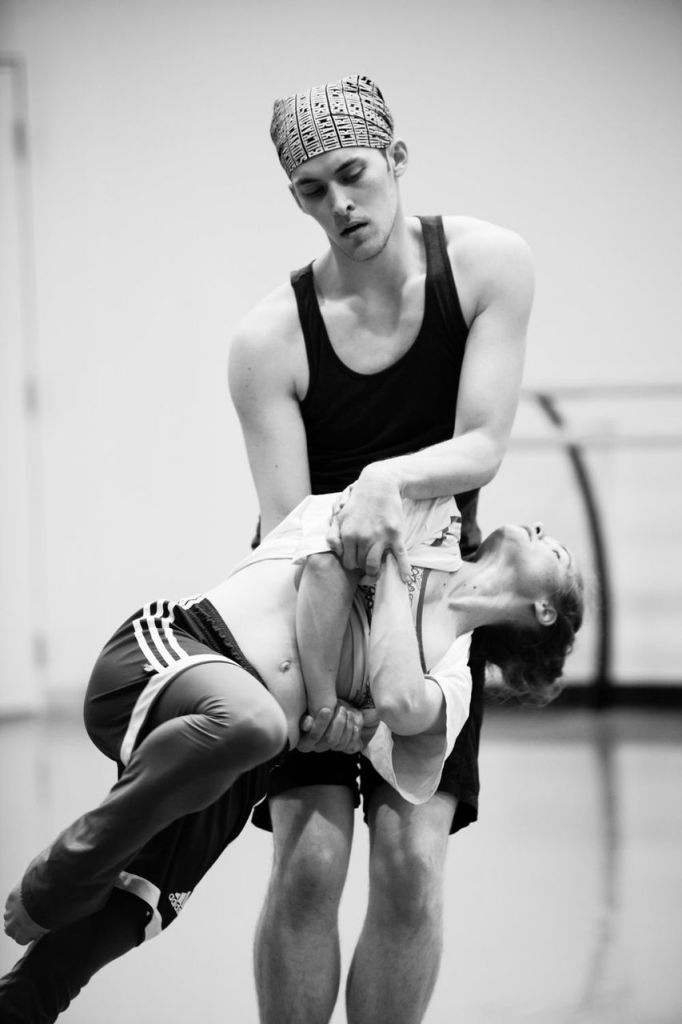 Upcoming:
Paul Moore, director of the UW Dance Department has composed the music for Soir Bleu. With its slowly evolving minimalist iteration of phrases, it underscores, as it were, the stillness of the paintings and the recurring but unresolved tensions in Hopper’s relationship with his wife.
“Lighting is key,” says Penny to creating the Hopperesque quality she is after.
For that she has been working with lighting designer Michael Mazzola.
Look for posts on both collaborations in the next few weeks.