For some time Olivier Wevers has been wanting to do a piece for Whim W’Him about the human predisposition to judge others and exact deadly retribution. The propensity to righteous cruelty resides, as he says, “deep in our core. It is thoroughly engrained that we are judgmental people, judgmental beings.” But it is only if we each recognize this capacity for inhumanity as part of our own individual heritage, not something belonging to other people, he passionately maintains, that we can grow out of or rise beyond it.

There are many ways in which people are put to death under the societal auspices—hanging, electrocution, gas chambers, firing squads…

A year or more ago Olivier mentioned to me the idea of using the guillotine as a symbol of the violent, judgmental tendency all too common to our species. But it was when he started reading about the ancient, yet still practiced tradition of stoning, that he knew he had found a metaphor with the strength and depth he needed. In a 2009 film, The Stoning of Soraya M, by director Cyrus Nowrasteh and screenwriter Betsy Giffen Nowrasteh, the horrific execution of a young Iranian woman in 1979 was dramatized to illuminate “the dangers of religious fundamentalism, gender apartheid, and mob rule.”
This fictionalized adaptation of undercover French journalist Freidoune Sahebjam’s best-selling novel centered on a true-life Iranian tragedy. While most critics (and I, too) find the film heavy-handed and overstated (“literal overkill,” as one reviewer remarked) and think that it neglects the causes, subtleties and moral ambiguities of how a situation like this could arise, there is no gainsaying the ghastliness of the 20-minute stoning sequence, the way it makes you feel in your guts to have to face the fact that human beings are capable of such a thing.

But whatever failure there is of the film’s director and screenwriter to even conceive of complexity in a situation that could allow those villagers who are neither villains or saints to acquiesce in the abomination, there is no gainsaying its raw horror or the fact of the event itself having taken place.
And the staging of th 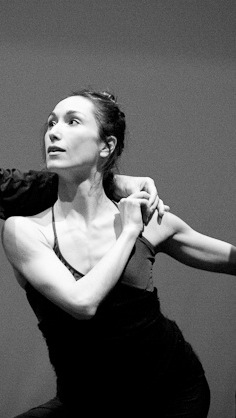 is scene can work for the enlightenment of those of us who can’t (or won’t) allow themselves to think of such a thing or who are fortunate enough never to experience first-hand the extremes of human cruelty. For those connected to Whim W’Him’s latest project, says Olivier, the film is a way to react more directly to that terrifying act, to experience it in the depth of one’s being.

It must be emphasized, however, that society-sanctioned torture/murder, is not specific to any time or place. Brutality, especially linked to self-righteousness, is a universal characteristic of our species, found as well throughout our own national history. Violence has dogged our country since the beginning: from the ill treatment, treachery and injustice that accompanied so many of the earliest interactions of European settlers with American natives; across the period of U.S. slavery to the savagery of the Civil War, and the subsequent lynchings and burnings which were the legacy of that evil practice; through the lawlessness of the Old West and the atrocities of 20th century totalitarianism and total warfare; to the cruelties of Abu Ghraib, “extraordinary renditions,” and the home-grown terrorists of our own time.

Thirty-four of the fifty United States still have the death penalty. One hundred official executions were carried out in 2010 (though they took place in only twelve states). And all of this is not even to speak of the often less overt or less physical forms of cruelty inflicted by society throughout our history on black people and ethnic minorities of all sorts, women, and those of “non-standard” gender preferences. It is a heavy-handed irony that “inhumanity” is such an excruciatingly human form of behavior. A story of a woman stoned to death, then, while not drawn specifically from American history, is thus of so basic and primal a nature as to lend itself to the particular nature of what dance—among the most basic and primal of human activities—does and can do.

Beyond the specific storyline, there is a question of how dance can or should address this subject. Does it restage—and with what degree of abstraction—the terrible event itself? Can it tackle further questions of why good people do or let themselves be drawn or cornered into acquiescing in bad things? Is it able to explore the human characteristics that make horrendous events like a death by stoning not a mere occasional, bizarre outlier, but part of the common, if extreme, behavior range of our species? Might dance help us to understand why we, even the peaceful and gentle among us, get thrills out of car chases and action movies? Can a work of choreography convince us that we are none of us totally uncomplicit or blameless? And will it be able to do anything to suggest how we can tame and redirect the violent and cruel propensities of our species?

So far, these are just my wonderings. Olivier has barely begun making this work. Because I am away from Seattle until the end of September, I haven’t seen any rehearsals yet—most of them are still to come—and the shape of the work, the questions it will explore, try to answer, or avoid, will only become clear (even to him) in the process of creation.

There are hints, though. A few things are clear already. The piece will be danced barefoot. The costumes involve long draperies that become part of the choreography, part of telling the story. The role of the protagonist will be danced by Chalnessa Eames. The music will be contemporary, with a Mideastern flavor. As a metaphor, deliberate, premeditated stoning is powerful and poetic, “violent,” Olivier says, “but still poetic because not a literal event. The image of a person stone in hand is so powerful for me. That there are such people taking such a stance is our responsibility, no less than the person throwing the rock. We each partake of our mixed nature. It is as if we are all, every individual, standing with a piece of rock in our hand. Only if we are aware, if we accept who we are as humans, can we fight it.” Thus while the central image is drawn from the Mideast, the “cradle of civilization,” the theme of Whim W’Him’s new work will broaden out well beyond the Biblical era and the Middle East to address our own times and places too, in an idiom that Olivier will invent through the dancers as he creates the piece.