Words about music without sound are like words about dance without photos.
Before reading about composer Byron Au Yong,
you might like to listen to samples of his work at: HearByron.com
Byron is a bridge,
an arch,
a vault,
between old and new music,
West and East,
artifice and nature,
music and soundscape.
But it’s not as though he hovers indecisively between.
Rather he partakes of each and brings with him sensibilities, ideas and techniques from the other.
A perfect match for 3Seasons.
The setup: At the start of each 3Seasons show, one Vivaldi season will be chosen, randomly, to be dropped. In its stead, the dancers will perform what Olivier has choreographed for that season to a live performance of Byron’s corresponding movement, adapting as they dance to the spirit of his new composition.Recently Byron talked to me about his work for 3Seasons.
He began composing in measures, with time signatures, 3/4, 4/4, 12/8 time. His limit was the Vivaldi score of The Four Seasons, as performed by Joshua Bell in the recording that will be used in 3Seasons. The structure of 3Seasons called for Byron to compose music of the same duration as the Vivaldi, not just generally for each season, but to match the intervals within each movement and the many changes of tempo and mood, so that dancers who had learned on the Vivaldi score could perform to Byron’s musical composition.These were the foundations. For himself, Byron says, to continue experimenting over time it’s more intriguing to have the form to start with. It requires, I think, a great deal of discipline and imagination to find freedom, originality, and the expression of a radically different sensibility from Vivaldi’s within his parameters of musical time.And originality there is in Byron’s work, in ample measure. Instrumentation to start with. Vivaldi (writing in the early 18th century) heard and used natural sounds, sounds of the country—birds, a cuckoo, trills—but Olivier and Byron have been thinking more of urban sounds, while Byron has been working in a 21st century awsthetic of noise and attention to texture and sound.

So for 3Seasons, Byron’s musicians make use of: 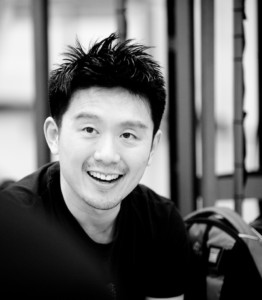 He says his musicians are “a lovely trio, enthusiastic and willing to try new things— noisier, nastier sounds, but finding a beauty in these harsher sounds.”In the course of composing this music, Byron has attained a much greater understanding and appreciation of Vivaldi, and an enormous admiration for him. Vivaldi was a very smart crafts person. As an adept of the Baroque style, he was not so measured and symmetrical as a composer of the Classical period like Haydn.
“Vivaldi,” Byron says, “is more organic, like some odd animal breathing. It’s good to get in there and think what it has become in all these intervening years.

Over the centuries, Vivaldi’s The Seasons have not just been interpreted hundreds of times, but even been rewritten by musicians and composers from near-contemporaries of his to 20th century heavy metal.
Why?
“Vivaldi is a ring tone now, but he has lasted because of his structural integrity.” Byron says. He himself always been a formalist, with a strong interest in the structural aspect of music, and he sees a certain architectural essence to Vivaldi as why he lasts. In this project Byron has delighted in being able to get deeply into the structure of Vivaldi’s music, while creating something altogether his own. “I am scared,” he says, “and also confident, about the fact that there is no [apparent] trace of Vivaldi” in this new work.
So, what happened when the dancers first time they put movement designed for Vivaldi to with this entirely different musical composition? Watch for another post soon on Byron’s reactions to the dancers and theirs to his sounds.Byron Au Yong’s CDs: