Conceiving, designing, and building the costumes for Olivier Wevers’s The Sofa*
at Grand Rapids Ballet was truly a cooperative venture. Olivier described the effect he wanted. GRB artistic director Patricia Barker supplied leotard patterns for the basic costumes, from those she had designed for her dance and yoga clothing company,       BK Wear. Then it was up to the two Costume Department heads, Melissa Leitch and Clare Gardeski to realize the garments for the dancers.

Clare and Melissa, who have quite different strengths and interests, work together seamlessly to produce a wide range of costumes both finely crafted and inventive. 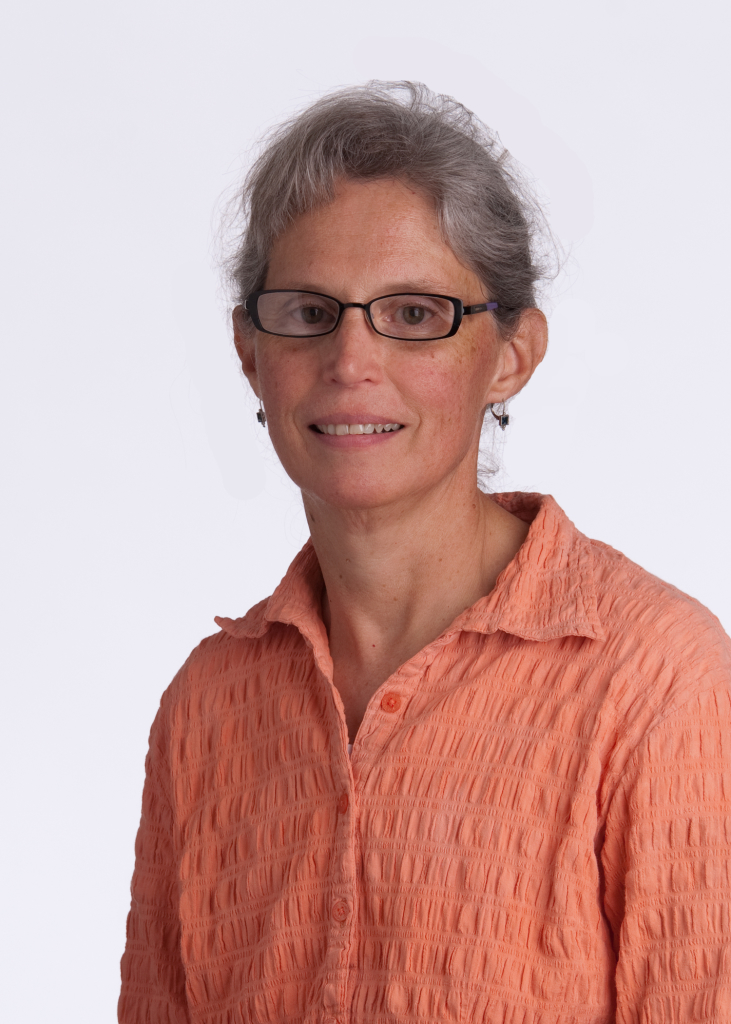 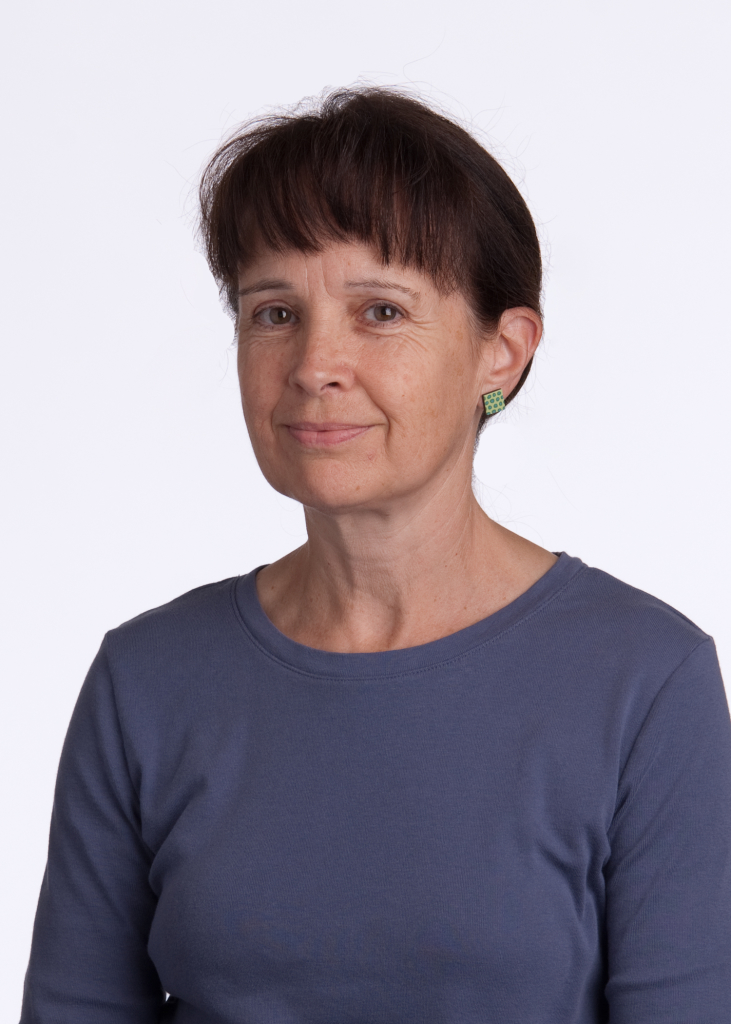 The two have very similar backgrounds. Both have sewed since childhood. (Melissa’s parents owned a fabric store, where their children worked in exchange for cloth. The family sewed, including her dad who made himself a leisure suit & a jumpsuit in the 60s.)
Both went to art school. Only Clare finished, but Melissa learned a lot of skills, including (in a sculpture class) how to use power tools.
Both have raised two children (two girls and a boy).

And both were working at fabric stores when Jamie Heeringa, the GRB Costumer, asked if they’d like to help out at the ballet. That was 7 years ago. Clare and Melissa volunteered at first, for free tickets and the experience. When Jamie retired, 2 years ago this coming February, they had been almost full time for about 4 years. So they stepped in to take over the responsibility.

Clare’s strengths, says the outgoing Melissa, are in organizing, prioritizing, and fitting, as well as constructing bodices and tutus.

Melissa’s own talents are for what she calls “the fun stuff,” like fashioning dragons’ heads for the Nutcracker (below) or the wicked fairy Carabosse’s cart. 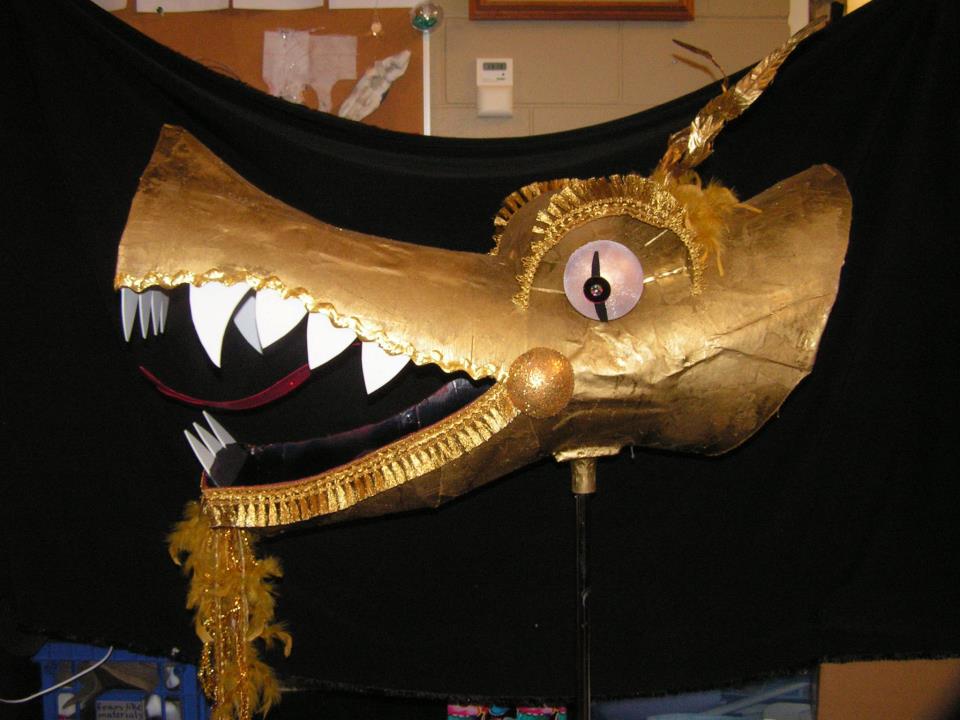 For Yuka Oba, the lead female dancer in The Sofa, Olivier envisioned a big extravagant skirt of billowy material that would waft in her wake. “Parachute silk?” he suggested. Instead, Melissa showed him an octopus costume she’d already built for a children’s show, where the voluminous skirt had insulating tubes with heavy wire inside to provide the legs. When Olivier saw it, he liked the look a lot and wanted something very similar. He also was pleased with the fabric, habotai silk, a smooth ultra-light cloth used for linings. Luckily, the costume shop had a whole bolt of it, which Melissa dyed 7 or 8 times, “scrunching it up” in a tie-dye technique to produce a sumptuous mottled purple. The frame was made first and the cloth attached to it.

During the building process, Melissa visited the rehearsal studio from time to time to assess how the skirt would be put to use.
Once she came in and Yuka was being rolled along the floor. “She’s not wearing the skirt now, right?” she asked Olivier, knowing that it’s removed during the piece.
“Oh yeah, she is,” he replied.
Noting how the hoop of the skirt would come up right over Yuka’s head, she wondered, “Is that okay?”
“Great,” he pronounced, “that’s great!”
Luckily the underwires of the skirt are both strong and flexible, and so, their builder now concedes, they work very well.

Meanwhile, Clare, who  is “a fantastic seamstress” in Melissa’s words, began to reconfigure leotard patterns for Yuka’s bodice—which has hooks to hold it together, but looks as if it laces up—and for the costumes of the other eight dancers, a sort of corset or vest effect with stretch velvet shorts. Each top has different details, and Clare is an expert at assuring that each one fits just the way the dancer likes it. At the same time, Melissa was designing and creating the vest and shorts for Yuka’s partner, Nicholas Schultz.

Together the two worked tirelessly to imbue the piece with a special magic. 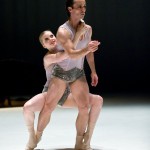 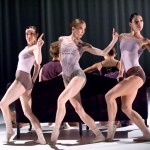 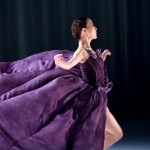 *The Sofa was commissioned by Patricia Barker for GRB’s MoveMedia festival, where it premiered in April 2012. The Seattle premiere  is part of Whim W’Him’s current production, Crave More: January 18-20, 2013 at The Playhouse at the Seattle Center (formerly Intiman Theatre).
Tickets are now on sale at: Whim W’Him | Crave More