Lauren Edson “has luminous eyes, a pixie-like smile and a flair for choreography that stretches her already supple body to the limit,” says the Idaho Statesman. That appears to have been true since earliest childhood in Boise. Her mother, she says, “had my sister and I enrolled in a lot of different activities—music, art, sports, dance—to see what we connected to.” Until 15, Lauren was “very shy, introverted and didn’t talk that much.” But to be onstage, she soon found out, was the antithesis of that. “I weaved in and out of groups, was hidden, guarded. On stage, though, I felt at home and liberated. To be seen felt good. That’s where I felt the most confident and the most vulnerable.” The combination was exciting, especially as Lauren “happened to be good” at dance. “I always danced and made dances. From a very early age I was curious about how my body moved.” By the time she was in fifth grade, she was confident and accomplished enough to choreograph the whole of West Side Story for her school Dance, as she says, especially making dances, was “always my vehicle.”

For Lauren’s senior year in high school she went to the University of North Carolina School of the Arts. At NSCA, where students enter “when they are ready for focused, intense professional development at the baccalaureate level and in select programs at the master’s and secondary levels in its schools of Dance, Design and Production, Drama, Filmmaking and Music.” Her experience there magnified the realization that my abilities could translate into a career.” She adds, “I’d found my family.” 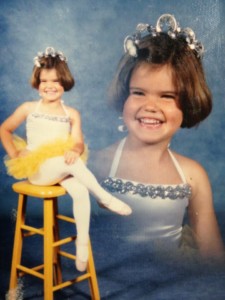 Even before North Carolina, Lauren had set her sights on The Julliard School. She auditioned for the school while at NCSA and got in. The late Benjamin Harkarvy was director the of the dance division.”He’d personally selected the class, and I had such a connection to him.” She arrived in New York shortly after 9/11 and recalls the profound impact it had on her life. “I questioned the significance of what I was doing and why I had been grappling with such demons of perfection all my life.” That self-criticism and the compounding of these events seems to have taken its toll. Laurent left Julliard in her sophomore year and wen back to Boise, very discouraged. As she relates, “I had started so young. It was hard to understand dancing within the confines of a four year program. Everything I was learning at the school was absolutely what I needed, but I couldn’t digest it at the time.” 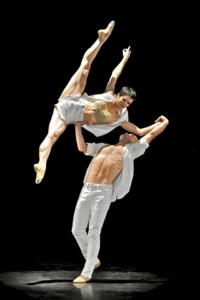 In Boise, she knew she had to go in a different direction, so “I took a job at Hubbard Street Dance Chicago, but again, I wasn’t at a place where I could be present.” Back she went to Boise, her hometown. “Boise’s boomerang effect.” But it was not enough. This time she went off to Portland, OR, where she stayed to get a degree in exercise science at Portland State University and continued choreographing, for Northwest Dance Project and other companies. Gradually she realized that what she really wanted to be doing was making dance.

By that time Lauren was “off the path,” of a professional dancer and believed she was committed to a freelance choreographic career. It was then she heard that Trey McIntyre, whose work she had long admired, was starting a company in Boise.  She auditioned a couple months later and got hired.  She spent three years performing and touring with TMP and recalls, “I had finally settled into a place where I could really enjoy the process and accept the path I had chosen.” 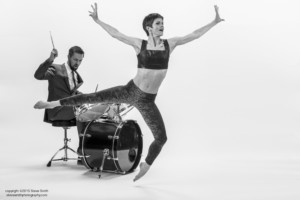 Also, “during that time period I’d met my husband.” Andrew Stansaas is a musician and composer. The two had both lived and worked in Portland for years, but had not crossed paths. It was in 2009, when Andrew relocated to Boise to teach at Boise Rock School that they connected. She first collaborated with him on a work commissioned to premiere at a festival in New York in 2013. “It was a lovely collaboration.” She pauses before adding with her impish smile, “I was pregnant too. Collaboration on all fronts.” Their son Finn was born in 2014. 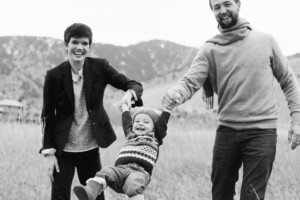 TMP dissolved in June of the same year, and Lauren took some time off. “I loved that. Becoming a mother has absolutely been the best thing for me as an artist. I feel like something has been unlocked.” She works hard to balance motherhood and her creative career and is committed to continuing to explore what she loves, both at home and via commissions elsewhere, like the one for Whim W’Him‘s September Shindig. 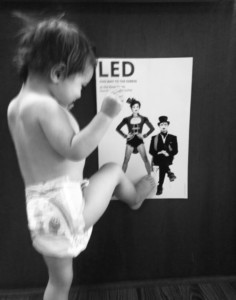 Last year Lauren and Andrew formed LED, their own company in Boise with an aim to create visceral worlds where sound, movement and visuals collide. 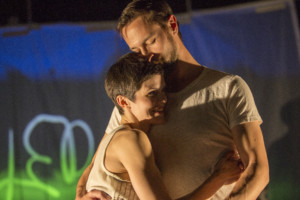 Up next: Lauren in the studio creating her new piece for Whim W’Him