Tory Peil is the soul and center of A Disagreeable Tale of Duplicity by artistic director Olivier Wevers, the first piece in OUT-spoken, which opened at at Cornish Playhouse last Friday night, June 3.* The role of belaguered and betrayed heroine in this intensely theatrical work could easily turn into pathos, bathos, or old-fashioned maiden-tied-to-the-track melodrama, were it not for the ingenuity and riveting images of the choreography and Tory’s passionate honesty and physical lucidity.

As Lady M wrote in a post show blog post , “…a choreographer’s vision can only go so far if he or she does not have dancers willing to go there as well. And by there, I mean complete and utter vulnerability and courage.”  Adds Michael Upchurch in his review for the Seattle Times, “It’s the flourishes—especially Michael Mazzola’s lighting design and Dylan Ward’s electronic distortions of a Prokofiev piano score

[the 1937 piano version of his Romeo and Juliet]—that give it its intensity, along with the feverish rigor of the dancing.”

Patrick Kilbane’s bewildered lover is enchanted by Tory at the start, but all too readily seduced into open-mouthed desire by the smooth and flirtatious Jim Kent, and Tory is turned away.

A nightmare counter-seduction envelops the despairing Tory, in the person (or beast) of Mia Monteabaro as a goat-headed creature who feeds and feeds on the protagonist’s most transgressive desires.

Throughout, cold official paper plays a disquieting role in the hands of the slinky Justin Reiter (surely the sexiest bailiff ever to deliver a bureaucratic document).

But as Upchurch suggests, “the spookiest touch may be Kyle Johnson and Thomas Phelan as grimly marching militaristic figures in gray hoodies, trying but not succeeding in putting this romance back on course.” 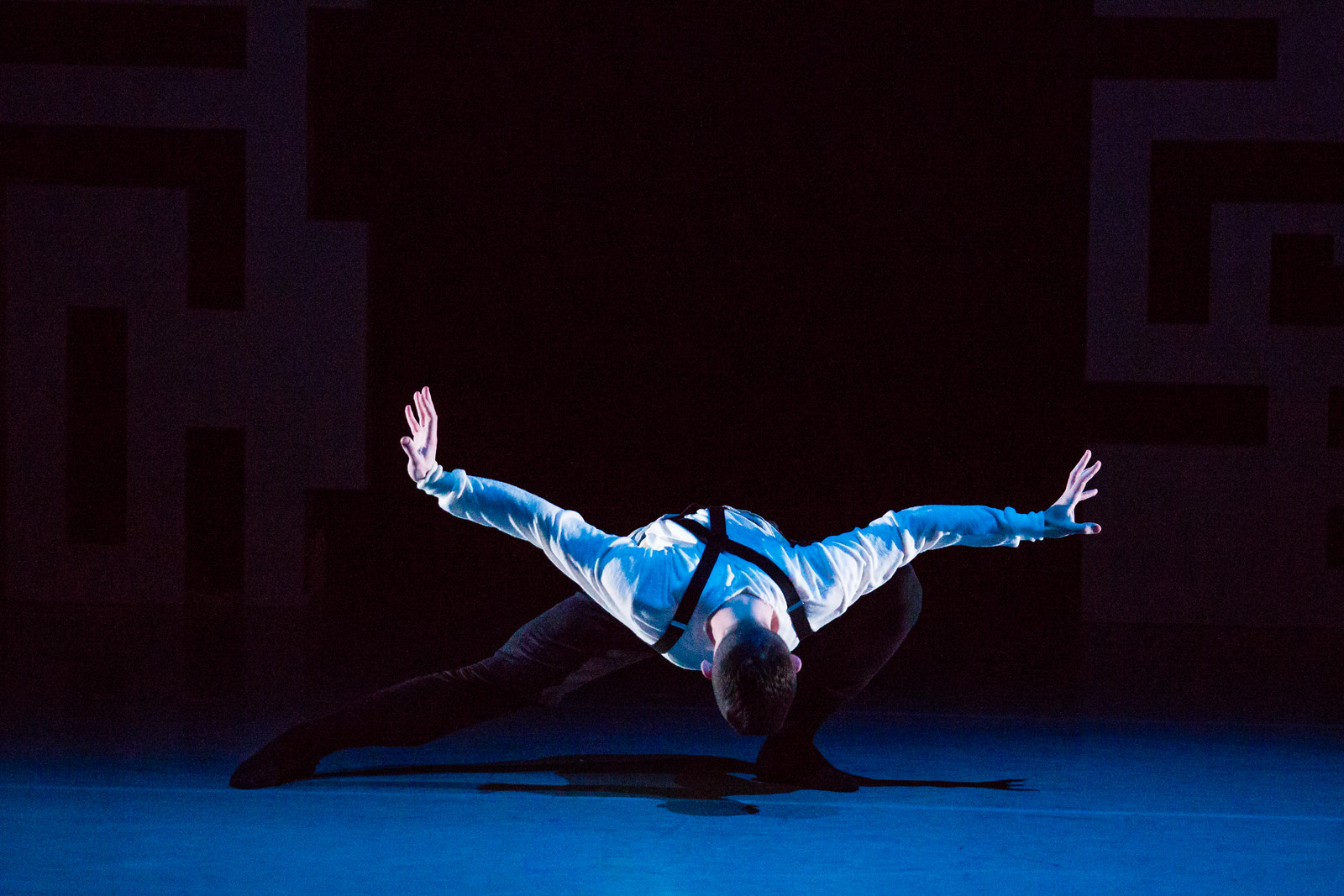 Despite its similar origin in the choreographer’s personal relations, Into You I Go Willingly—a duet for Jim Kent and  Patrick Kilbane by James Gregg—is, in Michael Upchurch’s words, “an intricate, probing piece of work” of a totally different sensibility. “It’s danced before a striking rectangular gate, vaguely Chinese in design,” Upchurch coninues, “that offers a weighty contrast to the fluid, floating muscularity of Kilbane and the darting, lithe uncertainties of Kent.”

While Olivier’s Disagreeable Tale is a sort of fable or fairy-tale-without-a-happy-ending, Willingly seems somehow quite naturalistic look into the lives of real people.

The movements of the two dancers are skilled and graceful, but oddly the effect is to give viewer the sense of eavesdropping on the awkwardness, hesitations, and confusions of a very particularized relationship. When in the Q&A session after the show someone asked about the different choreographer’s approaches, Patrick said, “James gave us a narrative to follow and separate roles. The feeling lives inside in the choreographer—extra tenderness and almost violence,” while Jim added, “if I know what I want, the character will come through.”

Annabelle Lopez Ochoa’s Delicious Pesticides is yet another kettle of cockroaches. As she said in the after-show Q&A, “The first piece I did for Whim W’Him was Cylindrical Shadows, after the death of a friend. This is totally different. It’s about pop culture and having fun. I wouldn’t cry when I talk about this piece!” And in fact, with Pesticides she’s created a screwy, high-energy take on Pulp Fiction, not in the literal sense of a retelling or as spoof, but rather a riff on the stylistic themes of the movie. “Pesticides,” writes Upchurch “is goofy fun that has something to say about how eagerly we lap up bad behavior.” 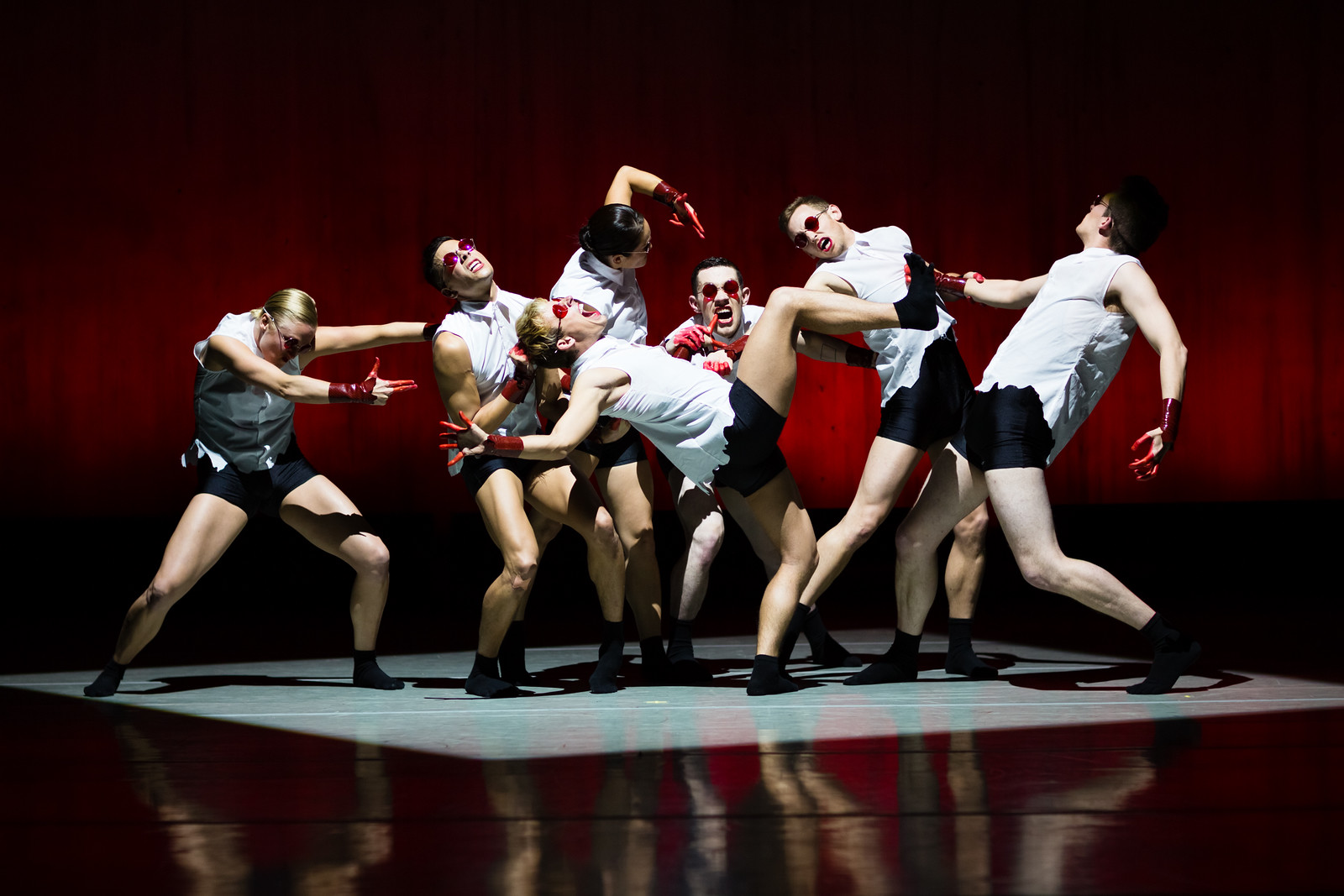 In her own inimitable style, Annabelle experiments with Tarantinesque conceits (via a Dutch expression that equates small-time criminals and bugs) to a score by Joffrey Ballet dancer Dylan Guttierez, who plays in just the same quirky spirit with the original musical material. 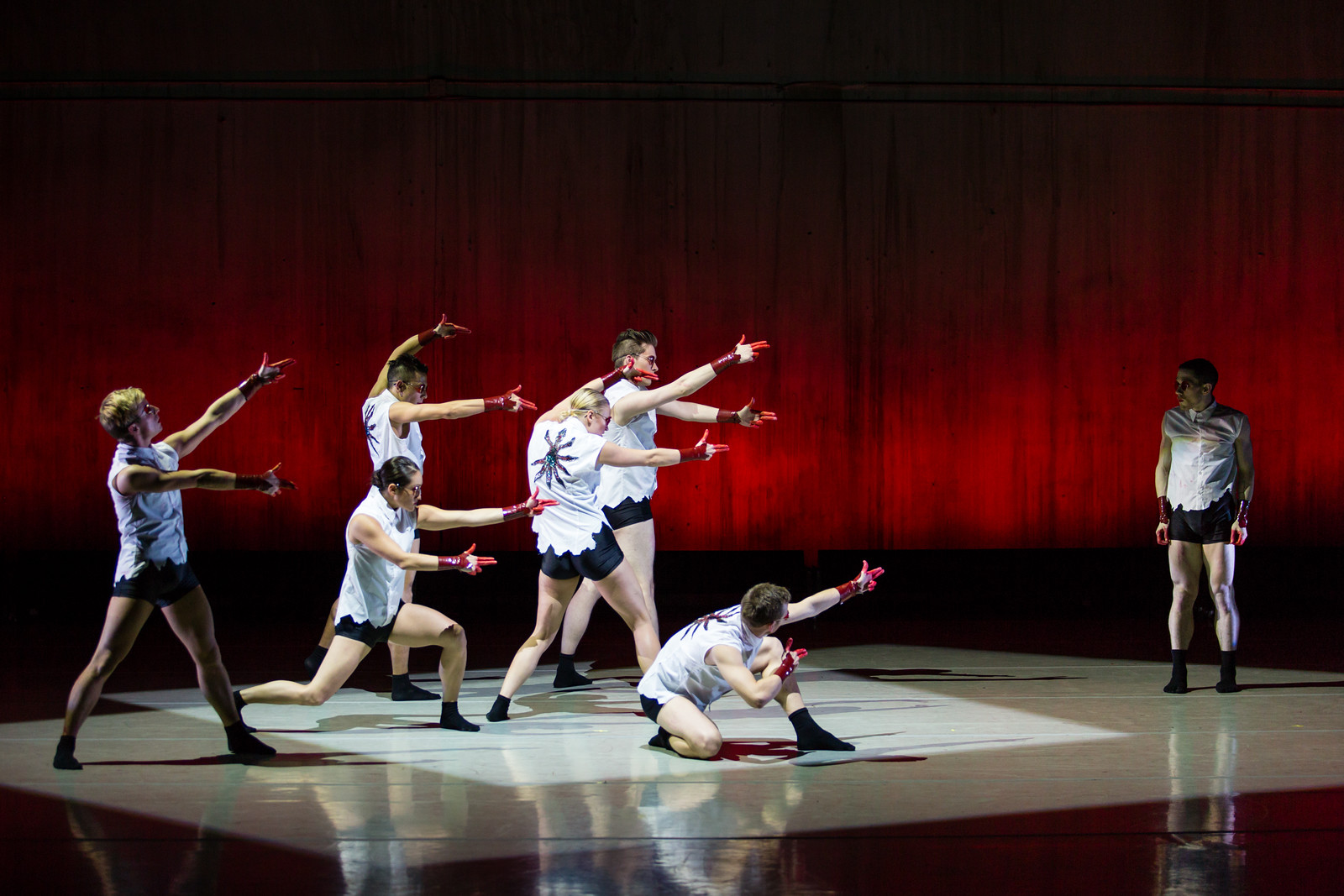 The inhabitants of this world are a colony, a pack who act together, with a lot of internal squabbles, but always in relation to each other. Bugs or petty crooks, they’re never truly independent. 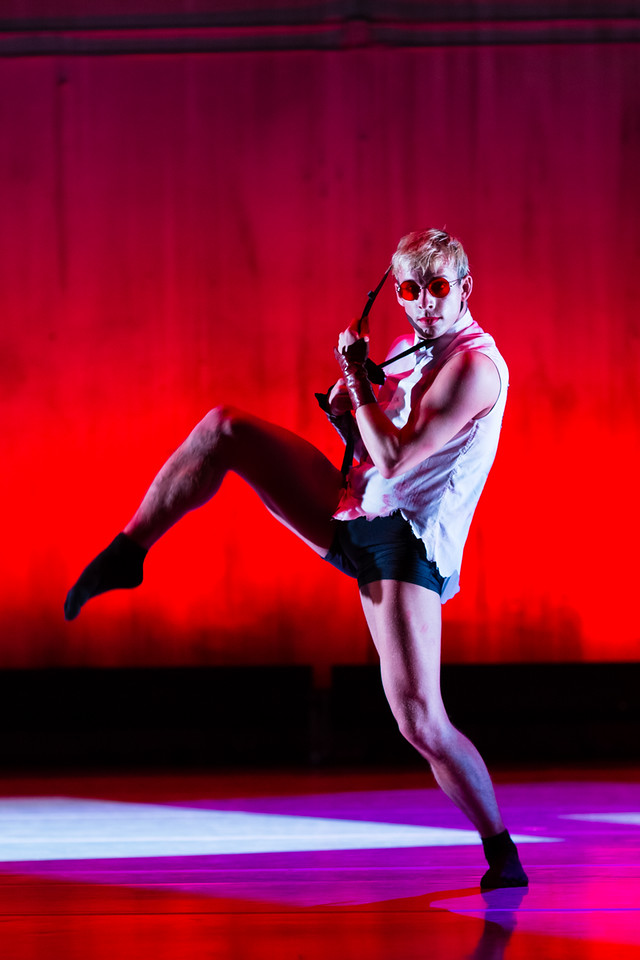 There are bits for individual dancers or pairs, small inner dramas, and one longer sequence that pits individualist Thomas Peil, decked out in outrageous red stiletto heels (apparently ordered directly from the Kinky Boots factory) against the group. 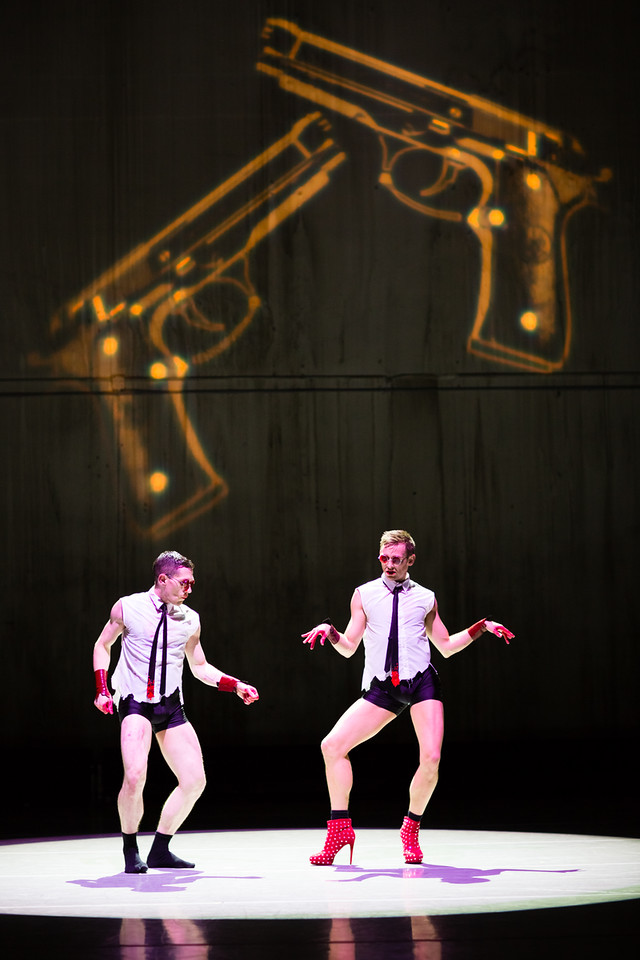 But a hilarious duet with Patrick turns dark when Thomas is literally cast aside by his mates. 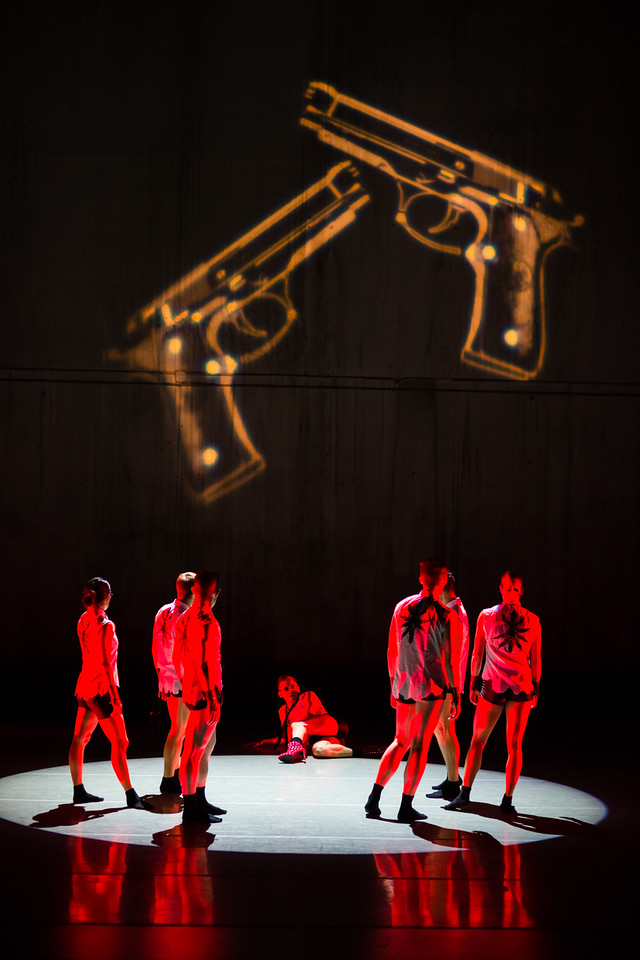 He picks himself up and gets back in line to join a fast unison frolic (with a funny little twist at the very end). 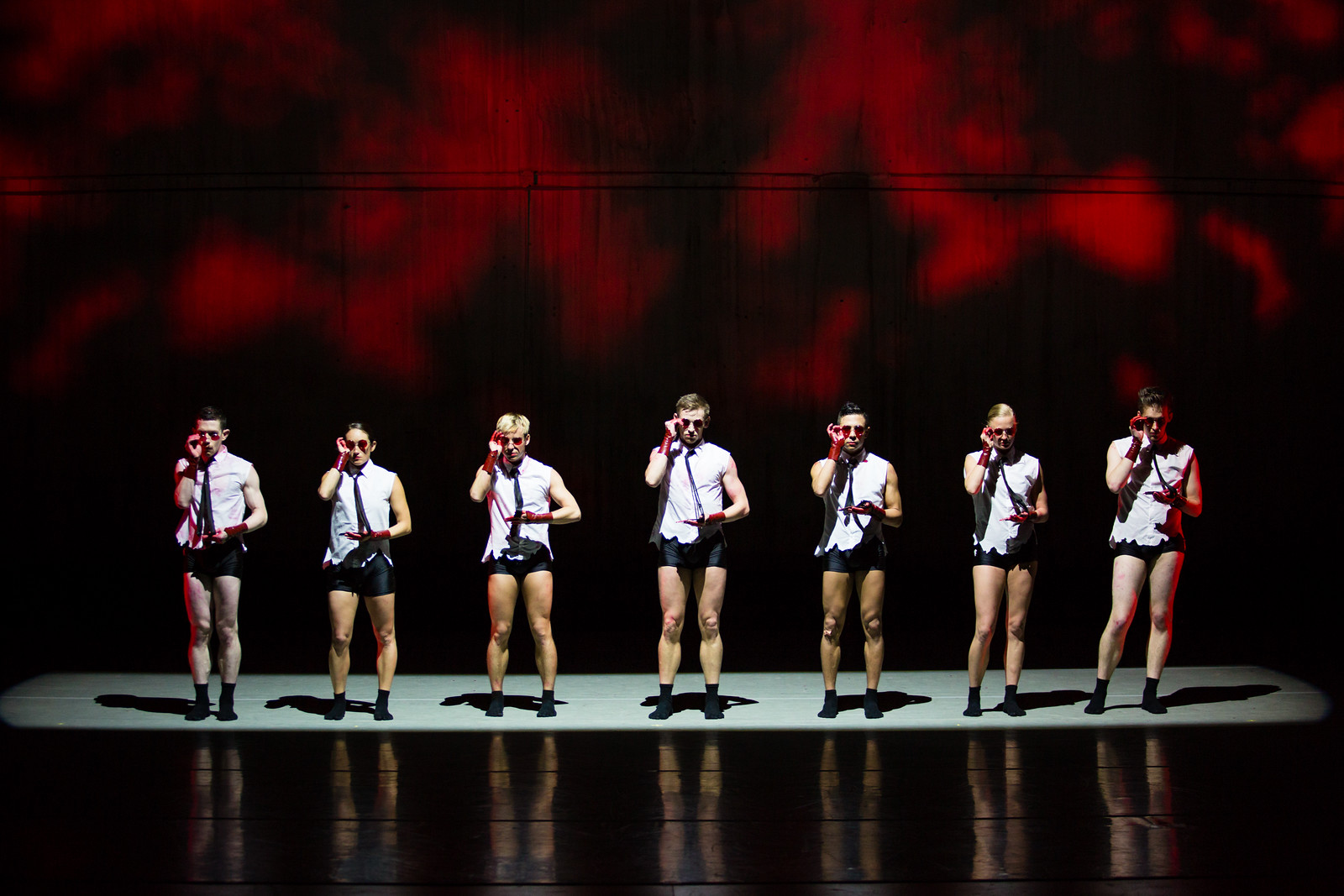 As one audience member noted, the seven dancers and the floor of fast-moving, bright-colored diamonds of light made it seem like a much bigger company in the finale. So the evening that begins in tragedy ends on a zany upbeat note. Despite Annabelle’s remark at one point in her creation process that Pesticides is absurd and doesn’t have any logic, one audience member remarked that, in a light-hearted way, the piece seems like a comment on how “The things we consume are gradually killing us.” Yet conflict and disagreement “lead to a refreshing unison at the end. The piece is so cohesive and has so many ideas—it’s so well-designed!” 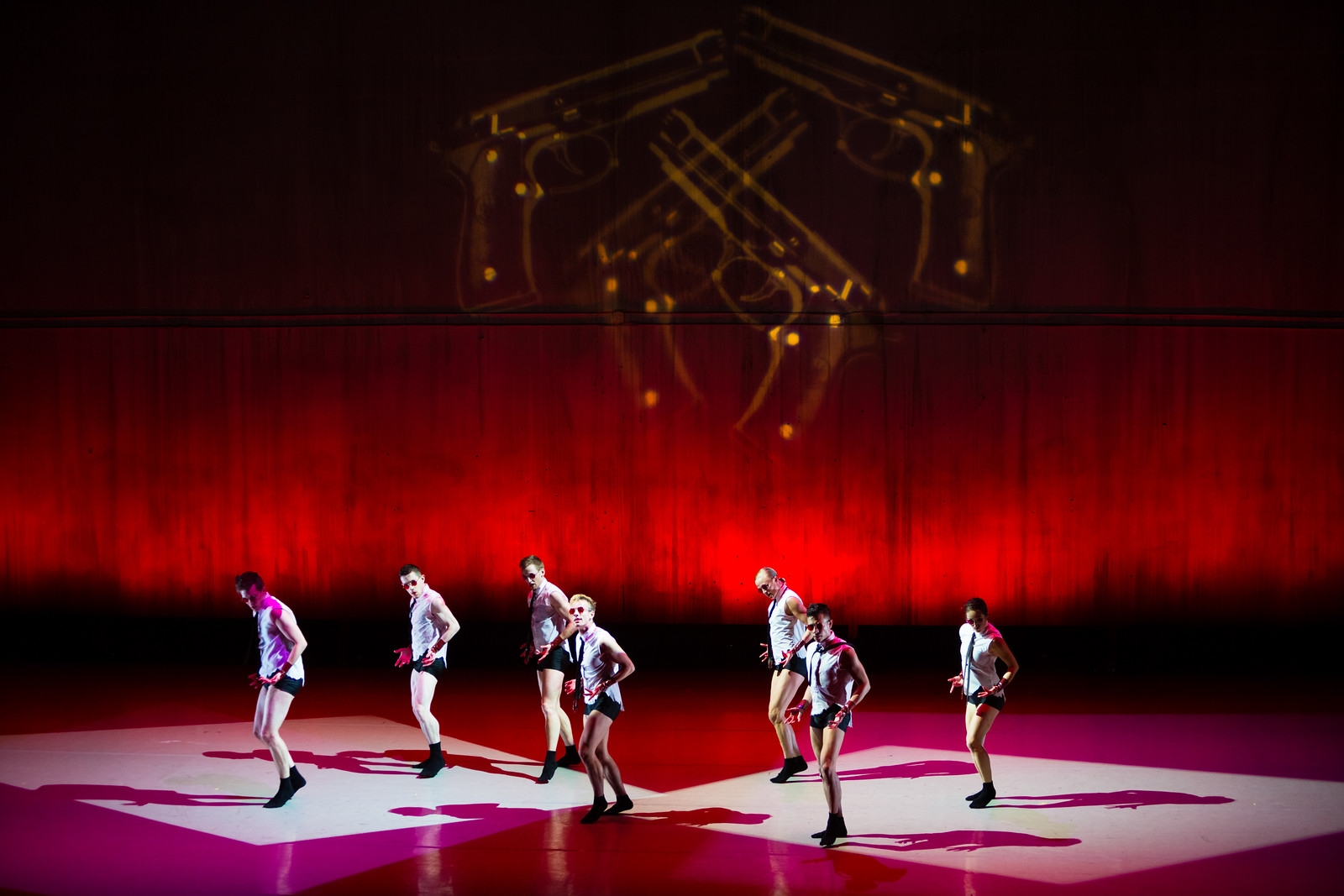 (Please note that due to illness the Saturday, June 4 show was postponed to a newly scheduled performance on Thursday, June 9. If you can’t make that show you can exchange your ticket for any other show or request a refund)